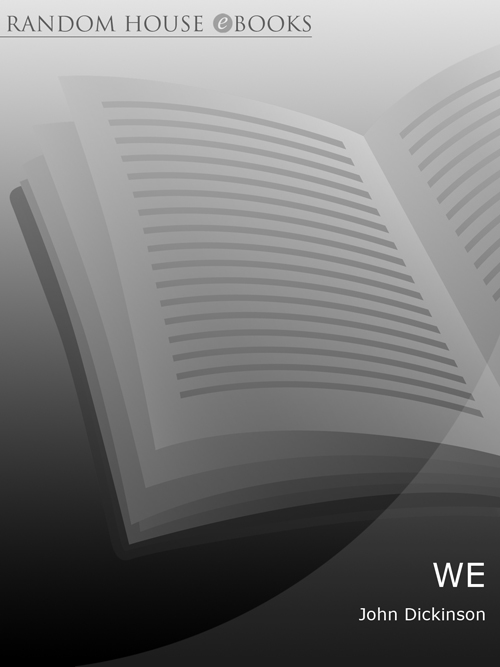 The right of John Dickinson to be identified as the author of this work has been asserted in accordance with the Copyright, Designs and Patents Act 1988.

All rights reserved. No part of this publication may be reproduced, stored in a retrieval system, or transmitted in any form or by any means, electronic, mechanical, photocopying, recording or otherwise, without the prior permission of the publishers.

The Random House Group Limited supports the Forest Stewardship Council (FSC), the leading international forest certification organization. All our titles that are printed on Greenpeace-approved FSC-certified paper carry the FSC logo. Our paper procurement policy can be found at
www.rbooks.co.uk/environment
.

H
e had asked to be alone when he woke. After all, he had reasoned, from now on he would always be alone.

They had told him there would be no pain from the operation. He had looked up the techniques they would use, checked the possible complications and had understood why they had said that. Nevertheless, something in him was surprised to discover that they had been right. There was none. There was only emptiness.

He blinked, automatically holding his eyelids closed for just that fraction of a second that would summon his displays. But no voice spoke in his head. No images appeared, no lists, nothing.

There were no weather reports, news pictures, financial statements, alerts concerning the state of his house or vehicle or the transmission systems that he was supposed to maintain. There were no demands from his supervisors. And there were no personal messages. Like everyone else he always went to those first. But there were none â no loving
images, no jokes or pictures, no one wishing him luck or promising to remember him. There was nothing more from Her. There never would be.

His fingers felt gingerly for his eyes. The artificial lenses were gone. He touched the soft hollow behind his right ear. There was a small dressing there. It was numb when he pressed at it. The wound it covered would be tiny. There was no pain. But the implanted systems he had carried all his adult life had been taken away. Of course they had been. That was what it was all about.

He focused on the things he could see.

He was lying in a bed, looking up at a white ceiling. The room was unfamiliar. Automatically he blinked again, summoning the answers to his questions. But the displays did not respond.

That moment â that first question, when his eyes blinked, his mind listened and waited for the displays, and
nothing
came â was the most dreadful he had ever known. It was as if he had suddenly put a foot out over the edge of a cliff and felt the depth beneath his toes. His ears heard a sound â a strangled gasp. His own throat had made it.

Now his brain lumbered into action (brushing aside the habits of thought that said to him,
Consult! Consult!
). He did know why he was here. He knew where âhere' was. It was a room adjoining the implants surgery. He had been left here
to recover. He had expected that. He had been put to sleep during the operation, to protect his mind from the moment of removal from the networks. Now he had woken. He was alone because he had asked that he should be.

How long had he been asleep?

What was the time?

Automatically he blinked again. But there was only deadness. Nothing lit in his brain to tell him what the time was.

Again, that lurch in his stomach â that moment of nightmare!
What is the time?
No answer.

Sunlight came in through the window. It was day. But what time was it?

Which day was it?

He drew a long breath. It shook in his throat.

He had been removed from the networks. There had been good operational reasons. There was a job to do, a long distance away. The networks did not work there. So he must be without them. He had known that.

But he had not known it would be like
this
!

Think. Breathe. Do not try to consult.

He looked around him. His sight, once he had stopped hunting for projected look-up displays, worked perfectly well. He saw the calm pale browns of the bedclothes. He saw
the single table by his bed, the cabinet in which his clothes hung, the old-fashioned, inactive walls. Opposite him there was a large mirror. It showed a man lying on a bed, propped on one elbow, looking back at him. It was himself.

His face was the same: the light, even pigment of his skin, the round cheeks and the sloping forehead framed in fair hair so short that his head seemed like a block set upon his muscular shoulders. He looked healthy. Nothing in his appearance had changed. Except the way the eyes stared, as if they were afraid.

Again he looked around. Things that yesterday would have been a background to his displays were real and immediate now. They were like soft punches on his brain: the white ceiling, the white walls, the window showing sky; the brown cabinet, brown bedclothes. The eyes of the man in the mirror.

Why white?
he wondered.

He blinked. Nothing answered. Grumbling with the unusual effort, his thoughts stirred.

It was not his field but the idea seemed sound. And it had not taken him very much longer to reach it in his own mind
than it would have done to look it up on the networks. Good.

It was only an idea. It was the product of one brain, working alone. It should be put for confirmation â especially since light and colour were not in his professional field. And â¦

And it could not be put for confirmation.

The thought must stay in his head. Because he had been removed from the networks, it could not go to anyone else. It would for ever be useless to anyone but him. He would never know whether it was accurate or not.

This was another bad moment. Again it was one he had foreseen, and again he had not foreseen how much it would hurt that his ideas had nowhere to go.

Of course it did not matter that his theory about the white walls and ceiling could not be shared. Such a simple thought would have been available to everyone on any network since the very beginning. But the same would be true for any insight he might have in his professional field. All his skills â all his understanding of the physics and engineering of radio telemetry â were now blocked off from the rest of humanity. Others would be trained to take his place. In training and operating they might use data that he had laid in the networks. But from now on he could make no
contribution. He was useless. Except for the one overriding purpose for which he was being prepared, he was useless to everyone living now or in the future.

Again he heard a sound â a sound that his own throat had made.

Abruptly he threw off his bedclothes and swung his legs over to the floor. The calm brown flooring was cool beneath his soles.

He repeated it to himself.
Look. See. Think.
He had barely seen anything since waking in this new, empty world.

He rose to his feet. The tops of buildings bobbed into view beyond the window. Carefully (fearing, in some deep part of himself, that his sense of balance might have been robbed from him along with everything else) he made his way across the room. He looked out.

He was high up, which was unusual. The implants surgery occupied a floor in one of the old âskyscraper' buildings that still dominated the centre of the city. There was another opposite him, currently in the throes of demolition, but enough of it still remained to show what it had been: a tower of dirty tinted glass, rising to many times the height of any modern structure. Yesterday, approaching the surgery, he had noted these improbable buildings that stacked storey on top of storey in so many layers. Had he wished, his eyes
could have blinked and tracked a few times and called up the reasons why recent generations had felt it useful to cram their physical bodies so close together. But his thoughts had been on other things. Now, when each sight seemed to be flooding in to fill all the huge spaces that had opened in his mind, he could only stare and wonder at that insane rush for the sky â the bewildering product of another time.

And he would not form any theories. There was no point, if they could be neither confirmed nor shared.

He looked down at the city. He saw the lines and lines of trees, planted along the verges of the avenues. He saw the angular shapes of old but still habitable buildings, constructed from masonry, peeping from among the green. Further off, the trees seemed to thicken and the glimpses of buildings showed not the old straight lines of tiled roofs and brick walls but the subtle curves of modern bubble-houses gleaming in the sun. There was the bright curl of the river, the beautiful inverted arcs of the old suspension bridges and the less pleasing but more functional criss-cross of modern cables that carried whatever traffic needed to pass from one bank to the other these days.