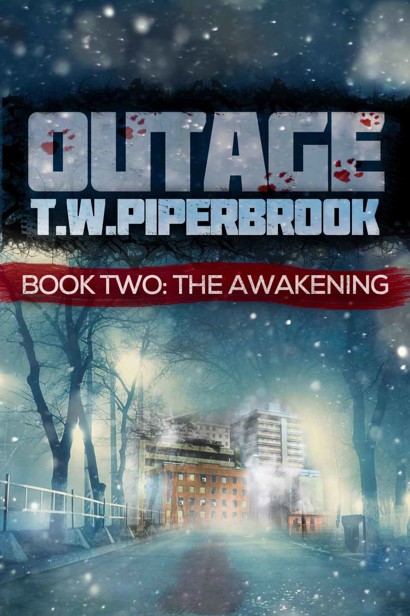 About Outage 2: The Awakening

Part One - The Collapse

ABOUT
OUTAGE 2: THE AWAKENING

Tom Sotheby has escaped the forest, but he is far from safe. His wife has been butchered. The town he once knew is a barren white wasteland.

And the beasts won't rest until he's dead.

His only hope is to get to town, to safety he isn't sure exists…

Want to know when OUTAGE 3: VENGEANCE is coming out?

Tom Sotheby pounded the wheel of the SUV, his eyes alternating between the forest and the road. He revved the accelerator, listening to the tires scream, but the vehicle remained hopelessly stuck in the snow. He wasn't safe. Not yet.

Growls and commotion spit from the trees, reminding him of the grisly scene he'd escaped. He let his foot off the gas pedal, then stomped it again. The wheels spun. Even if he survived the night, he had no idea what would become of him. His wife Lorena was dead. Gutted like a piece of meat. And he was next.

And so was Abby.

He felt a pang of sorrow for the girl he'd rescued. She'd been one of them. She'd been bitten, and she'd turned. In the throes of her transformation, she'd thrown herself into the fray and traded her life for Tom's.

He couldn't let that be in vain.

He dried his tears and glanced at the passenger's seat, eyeing the rifle he'd managed to salvage. The gun was empty. Even if it were loaded, it'd be useless against the creatures in the forest. He'd already spent his ammunition and failed. He had no extra rounds. There'd been no time to grab Abby's gun.

What the hell
were
these things?

He'd never seen anything like them. From what he could tell, they used to be human, but they'd become something else—beasts with claws and fur, elongated noses, and pointed teeth. Animals birthed for hunting.

He toggled between reverse and drive. The SUV lurched back and forth. The road was bathed in snow—eight inches, if he had to guess. It'd been difficult to drive a half hour ago, and it would be even harder now. He stared through the cracked windshield, watching snow spit from the sky. The wipers scraped back and forth over fractured glass.

The four-wheel-drive was engaged. Even with the extra power, the SUV wouldn't move. Tom peered through the driver's side window, certain the beasts were almost upon him. The noise in the forest had ceased. They must've taken care of Abby.

They'd be coming for him next.

Tom revved the gas again. If he couldn't get the SUV moving, he'd head out on foot. There was little hope he'd outrun the beasts, but he'd damn well try. Sweat trickled from his brow and adhered to his face. He could see his breath in front of him. Even with the heat on, the vehicle was freezing—cold air poured through the cracks in the windshield, and it fought against the warmth.

Tom gritted his teeth and grabbed for the empty rifle. He reached for the door handle, ready to flee. He stopped when he saw what was waiting for him.

A pack of shadows had emerged from the forest. He saw a glimmer of red eyes, the glint of claws and teeth. The beasts raced toward him. He drew back and mashed the door lock button, then shifted into drive.

He dropped the rifle in his lap and slammed the gas pedal.

Move, you son of a bitch!

The vehicle climbed and stopped, climbed and stopped. The beasts were three hundred feet away, spewing from the forest like ants from a dirt mound. He watched as they loped faster, gaining ground. Tom pushed the pedal to the floor.

"Goddammit! If this thing would just—"

The vehicle lurched. Miraculously, the tires grabbed the snow and stuck, and suddenly the SUV was rolling down the snow-blanketed street. Tom's heart pumped faster with each rotation of the tires.

The things veered from the woods to the road. Closing in.

Tom couldn't tell how many there were. At the moment, they were nothing more than a myriad of shadows, a legion of creatures that seemed like they'd come from hell to take him.

Maybe he
was
in hell. He could think of no better explanation.

The world had transformed from something he knew into something he didn't. Gone were the familiar, paved streets that he'd known; all that was left was this barren white tundra—the perfect killing ground for the beasts.

The SUV gained momentum, but not fast enough. Tom heard a scraping sound along the driver's door and looked over to find a furred hand at the window. He cried out and let go of the steering wheel, instinctively protecting his face. The thing clawed at the pane, raking its nails along the slippery glass.

"Get away from me!" he shouted.

He snatched the empty rifle from his lap. He knew it wouldn't do him any good, but his instincts had taken over, and they screamed at him to do
something
. He held the weapon against the window, as if the mere sight of it would dissuade the beast, but the thing continued to scratch the glass. Its eyes were red and inhuman.

The vehicle picked up momentum, and Tom fought to stay on the road. The thing growled at him through the window. After a few more moments, the beast slipped from the car. The rest of the creatures lagged behind. He stared at them in the rearview mirror—dark demons with red eyes. Watching. Waiting.

Their motives were simple: they wouldn't rest until they got to him.

And when they did, they'd rip him apart.

PART ONE:
THE COLLAPSE
Chapter One

"What's going on, honey?" Lorena stood at the porch door, peering into the garage at Tom. She folded her arms across her pajamas and rubbed her eyes.

"I'm starting the generator," Tom said. "The power's out."

He shined the flashlight on the gas can in front of him.

"It's freezing in here. Did you see all the snow?" Lorena asked.

"Unbelievable. And in October, to boot."

"You're not late for work, are you?" Lorena whispered in the semi-darkness.

Tom rechecked the time on his cell phone. It was one in the morning—much too early to think about work. For the past few months, he'd worked the weekend shift as an elementary school janitor, trying to earn extra money. He normally didn't leave until four o' clock. Weekdays were spent at the manufacturing plant.

"It's still early. I'll catch a few more hours of sleep before I head in. Maybe I'll get dressed before I lay down, so I won't wake you up."

"The roads are covered in snow, Tom. Do you think it's safe?" Lorena asked.

She shifted in the doorway, her voice wavering. Tom glanced over at the SUV. If there was one thing he knew, it was that there was no way to guarantee safety in weather like this. He swallowed his concern.

Lorena didn't argue. He could tell she was still nervous. Tom double-checked the generator's gas tank, verifying it was full, then set down the gas can.

"I'm going to open the garage and vent the fumes, honey. It'll get cold fast. Why don't you head inside? I'll meet you in a minute," he said.

Lorena reluctantly agreed, shuffling back into the house and closing the door. Tom shone the flashlight on the generator, replaced the gas cap, and walked over to the wide, single-bay garage door. He reached for the handle. The metal was cold against his fingertips, reminding him of how cold
he
was. Tom was still in his pajamas, and the chill of the garage was arresting.

He pulled up the garage door.

Opening the garage was like exposing another world. Tom stood at the threshold, peering out at the stark white neighborhood. The houses were covered in soft, rounded edges; the roofs were blanketed in snow. White pellets flung their way past Tom and into the garage, as if they, too, were trying to escape the nasty weather. The houses in the neighborhood were silent and still. No one was awake.

At least, not that Tom could tell.

"They're probably better off," he muttered.

He looked back at the generator. He felt guilty about starting it, but his house was set back from the road. Hopefully he wouldn't disturb anyone. He didn't want to subject Lorena to the cold.

She'd been through enough over the last few years.

Shrugging off his reservations, he walked back into the garage and wheeled the generator so the exhaust was facing outside. Then he pulled the cord. The engine roared to life. He peered outside guiltily, but saw no evidence that he'd woken anyone.

He padded back through the garage and to the kitchen door, shaking off his boots. Then he opened the door to the mudroom and reentered the house. Lorena was waiting in the kitchen. She was holding a flashlight of her own.

"Why don't you head back to bed? I'll meet you in a minute. I have to switch on the power in the basement."

"It's okay. I'll wait here for you." She smiled. "You're not going to blow snow tonight, are you?"

"No, I'll wait until tomorrow after my shift."

Tom played the beam of his flashlight upward a little, exposing her face. Lorena's eyes were soft and kind. At forty-five, she looked better than when they'd married. Despite that, Tom still saw the sadness that lurked below her expression. The loss of their son Jeremy still hung between them, even when they didn't speak about it.

Tom leaned over and kissed her, promising he'd be right back.

"Don't go wandering around in the dark," he warned.

He headed for the basement, opened the door, and made his way down. As he descended the stairs, he heard the dull drone of the generator through the walls. He wondered how widespread the outage was. Was the whole street out of power?

Was the whole town?

There was a chance Tom would arrive at the elementary school in a few hours and be without power. If that were the case, he wouldn't be able to do much. But he'd make the attempt. Tom always prided himself on being reliable, and he didn't want to miss his shift. Besides, he needed the money. They were fixing up the house. Once it was renovated, they'd sell it.

That was the promise he'd made Lorena.

He played the flashlight over the basement, revealing the oil tank, the hot water heater, and the circuit breaker. Next to the circuit breaker was a single lever. He'd installed the generator so that it was easy to use. When the lever was pulled, the house switched to the hookup in the garage. He wanted to ensure Lorena was always provided for, in case something happened. It was a morbid thought, but it was better to be prepared. The future could be callous and unpredictable.

Jeremy's death had proved that.

Jeremy had died during a winter storm like this one. Three years ago, he'd been driving home from a friend's house when he'd skidded off the road and flipped over a guardrail. Tom would never forget the moment the police had come to the door. He could still recall the officer's somber face. Since then, every snowstorm was a reminder of Jeremy's passing—both for him and Lorena.