Authors: Under An English Heaven (v1.1) 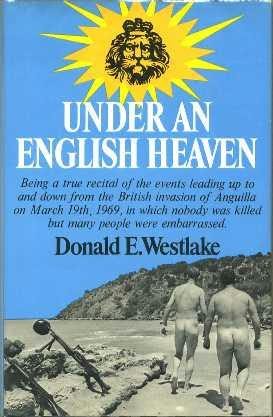 Once Against the
Law
(Anthology edited with
William Tenn)

The Spy in the
Ointment

God Save the Mark

The Curious Facts
Preceding My Execution
and
Other Fictions

Somebody Owes Me
Money

I Gave at the
Office

Under an English Heaven

Reproduced from the
original setting by arrangement with Simon and
Schuster
,
New York
.

All rights reserved.
No part of this publication may be reproduced or transmitted in any form or by
any means, electronic or mechanical, including photocopy, recording, or any
information storage and retrieval system, without permission in writing from
the publisher.

If I were to write something here
thanking everyone who helped me in any way while I assembled this book, the
result would be a second volume as long as the first. I can t do that, not and
remain on good terms with my publisher, but I did thank them all privately, and
I have tried in the book itself to offer them something even better than
gratitude: accuracy. If I have failed even in that—and I surely have, at least
a few times, despite my best efforts—I offer my apologies.

Having said that, there is one
individual I must single out for thanks. His name is Colin Rickards, he is a
British journalist and author, and he has been an incredibly kind and
well-informed Vergil in guiding me, a confirmed fiction writer, through the
descending circles of Fact. He has spent more than fifteen years as a reporter
of West Indian affairs, and he knows more about
Anguilla
and St. Kitts than either of us would dare to print. He has, in fact, written a
book on the An-guillan secession himself, which would have been published long
before mine but that it ran into mysterious problems. The book was already in
page proofs when the British publisher-part of a conglomerate, other parts of
which have business dealings with the British Government—decided for some
strange reason not to bring it out after all. At this moment, the book's future
is still clouded, but I wish it well; never have I so heartily welcomed
competition.

I once read that the Navajo Indians
in making their intricately designed blankets always insert one purposeful flaw
in the pattern, the idea being that perfection is the exclusive right of the
gods, who would be angry at a mortal who did something without defect. I have
no deliberate flaws in this book, yet somehow I doubt the gods will be annoyed
with me.

To anybody anywhere who has ever
believed anything that any Government ever said about anything . . .

If I should die, think only this of
me: That there's some corner of a foreign field That is for ever
England
.
There shall be In that rich earth a richer dust concealed; A dust whom England
bore, shaped, made aware, Gave, once, her flowers to love, her ways to roam, A
body of England's, breathing English air, Washed by the rivers, blest by suns
of home. And think, this heart, all evil shed away, A pulse in the eternal mind,
no less Gives somewhere back the thoughts by England given;

Her sights and sounds; dreams happy
as her day; And laughter, learnt of friends; and gentleness, In hearts at
peace, under an English heaven.

"Now tell us all
about the war, And what they fought each other for."
—Robert Southey, "The
Battle
of Blenheim"

When in the spring of 1967 the tiny
Caribbean
island
of
Anguilla
rebelled against
independence and in favor of colonialism, the act
ion was
so misunderstood by the islanders' ex-mother country,
Great
Britain
, that two years later the English
invaded the place with 315 paratroopers in a witless attempt to put the
rebellion down. Since British rule was exactly what the Anguillans had been
asking for, this was a military expedition doomed by its presumptions to plunge
into defeat, humiliated rather than slaughtered, but resoundingly trounced for
all that.

This triumph was the third in
Anguilla
's
unbroken string of victories over foreign assailants. The first military
invasion of the island took place in 1745, when a force of six or seven hundred
French soldiers landed at
Crocus
Bay
,
determined to wrest the place from the fifteen hundred mostly-English settlers.
The settlers, already thinking of themselves as Anguillans, had no army as
such, then or now; but some of them did have guns and none of them particularly
liked being invaded.

The invaders had been spotted
before they reached shore. A small posse of Anguillans dug itself in at
strategic spots on the ridge overlooking the beach and in fifteen minutes of
sharpshooting killed thirty-two Frenchmen and wounded twenty-five more,
including the French commander, named De la Touche. There were no casualties
among the defenders. The French decided that 7-to-l odds were insufficient and
tried to leave, but in the confusion of departure the Anguillans came down onto
the beach and captured fifty invaders. Thus ended the first invasion.

The second military invasion of
Anguilla
took place in 1796, when two French warships landed three hundred troops at
Rendezvous
Bay
, on the western end of the
island, with orders to kill every man and woman and child on the island and
destroy all buildings and crops. There ensued one of the oddest one-day battles
of military history.

Once again the Anguillans had seen
the enemy coming ashore. This time they'd sent a fast cutter off to the nearest
English settlement at St. Kitts, seventy miles to the south, to ask for help,
while in the meantime they made some effort to organize their defenses. They
were given ample opportunity to do so since the French, in landing, had failed
to keep their powder dry. Everybody on both sides waited while the French
spread out their powder on sheets in the sun.

Eventually the French powder dried
and the French troops attacked. They were professionals against amateurs, the
islanders didn't have the same handy heights at
Rendezvous
Bay
as they'd had at
Crocus
Bay
fifty-one years earlier, and
the Anguillans were driven gradually backward across the island. The invaders
killed everybody they got their hands on —raping the women first, of course—and
burned houses and crops, all according to plan.

The Anguillans retreated slowly all
day long, dragging with them their few small cannon, and finally took their
last stand at Sandy Hill, ten miles from the original beachhead and almost at
the opposite end of their small and narrow island. After running out of cannon
balls they melted down the lead weights from their fishing nets to make new
ones and fired
them
at the French. And Benjamin Gumbs displayed a
certain grasp of military basics when he told his men, "I'll tell ye what,
I know nothing about marching and countermarching, but my advice to you is to
wait till the enemy comes close, and then fire and load and fire again like the
devil."

At last, low on ammunition and high
on despair, the Anguillans decided they had only one move left: counterattack.
They came down off Sandy Hill with such fury and desperation that they drove
the French back, and back, and finally all the way back across the island to
their original beachhead at
Rendezvous
Bay
.

As the French were scrambling off
the island, having had more than enough of the Anguillans for one day, there
appeared offshore the British frigate H.M.S.
Lapwing
, Captain Robert
Barton commanding. The cutter that had gone for help had met up with
Lapwing
at
Antigua
. Now, between the crazy Anguillans on shore
and the twenty-six-gun
Lapwing
out at sea, the end of the day was not a
happy one for the French. And thus ended the second invasion.

The third military invasion of
Anguilla took place on March 19, 1969, when the British sent in their 315 Red
Devil paratroopers, who had been transported by frigate and who were supported
by helicopters, the Royal Navy, the Royal Air Force, and a stand-by detachment
of London policemen waiting on Antigua. This time the Anguillans put up
absolutely no resistance of any kind, and yet they defeated their invaders once
again. The instant the first paratrooper boot touched the sand at
Crocus
Bay
the Anguillans had won what is
possibly their most glorious victory of all.

England
does not love coalitions.