Read What the Heart Wants Online

What the Heart Wants 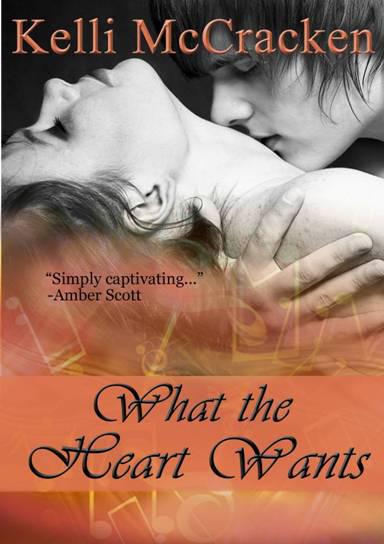 Early Praise for
What the Heart Wants…

“Prophetic dreams, psychic connections, and a bond that defies space and time…
What the Heart Wants
is a refreshing twist to the paranormal genre.”

“Mystifying and intriguing.
What the Heart Wants
will steal your breath away.”

Your Need to Read

“Simply captivating. I dare you not to swoon.”

“From life’s first breath, they were bound by destiny. Can their love survive those that would tear them apart?
What the Heart Wants
is beautifully written. I felt the angst and love of both characters. Dylan and Heaven really touched a place in my heart.

“
What The Heart Wants
is one of the best paranormal romances available today. If you are looking for vampires or werewolves you will not find it in
What The Heart Wants
. Instead, what you will find is a mesmerizing story that hooks you in right from the beginning and will keep you intrigued until the very end. You will find yourself saying, ‘It cannot be over...I need more.’ I expect more great things coming to us from the pen of Kelli McCracken.”

WHAT THE HEART WANTS

The crescendo of his heartbeat rose in his ears. It began as a low, deep sound of a bass drum accelerating to the medium tone of the tom-tom. It drowned out all other sounds of that glorious day, like the cheerful song of the spring robin. His ears turned deaf to every audible vibration, including the wind rustling through the branches of the willow tree.

Why couldn’t he hear the wind? It tussled his long, russet hair with each gust. The strands played against his stubbled jawline. The tree, the birds, and the wind were blocked from his mind. Nothing deterred him from his fascination with her.

His eyes coursed over her delicate features. Her chestnut-colored curls. Her high cheekbones. Her full, voluptuous lips…

To call her beautiful would have been unjust. While her beauty compared to that of Aphrodite, her soul radiated like an angel. Soft. Sweet. Heavenly. The breeze blew her hair from the nape of her neck, the ringlets swaying in the air. A scent of sandalwood rushed through his nose, intoxicating him.

Her skin, a soft shade of peaches-and-cream, glistened every time gilded sunrays broke through the swaying branches of the weeping willow.

When he gazed down into her eyes, his breath caught. He tried swallowing the lump in his throat, but his constricted chest held it in place. Her warm, inviting eyes were a rich shade of gold woven with flecks of olive green. She was looking past him to the broken, shale wall surrounding the estate.

Something about the lush green grass and the smell of roses tugged at him.
Wasn’t I about to… God, she’s beautiful.
He ignored his duties. Why shouldn’t he? Nothing could be more important than this moment under the willow tree with her, his golden-eyed angel.

His eyes searched hers for proof that she sensed the same magnetic force drawing them together. A force so powerful it was irrefutable as it called to his soul.

He waited for her to meet his gaze, shifting his weight from one foot to the next. The motion captured her attention. Her mesmerizing eyes focused back on his face. He released his breath, exhaling a slow sigh as he watched a smile spread across her lips.

He inhaled deeply, taking in her scent. It made his heart hasten when he imagined them pressed to his, allowing him to taste their sweetness.

She stepped in, closing the distance between them. Her eyes descended from his, lingering on his broad shoulders. He watched in silent awe as her arm stretched toward him. When her gentle fingers touched his skin, a line of fire coursed through every nerve, wrapping him in a cloud of desire. He fought against the groan creeping up from his lungs as her fingertips stroked his skin.

Her eyes wandered further down his body, focusing on his taut muscles.

In the passing breaths, his eyes fell to her tiny waist and well-curved hips.

He could no longer withhold his desire to touch perfection. Reaching out to her, he hesitated for a heartbeat, but then pushed his fears aside. His hand caressed her neck, sweeping slowly up skin as soft as rose petals until he cupped her cheek. She closed her eyes, her breath releasing a gentle sigh.

Her subtle reactions affected his soul. He knew women, but not like this. They’d never found the secret chamber that held his heart; had never come close to touching it. But this beautiful angel in front of him—she knew. She’d not only found his heart, she had brought it to life, made it race like a river rushing through a canyon. He wanted her more than a rose wanted sunlight; needed her more than the air he breathed.

A smile played at the corner of her lips. She leaned her cheek against the warmth of his hand. “Can you feel it?”

Her voice was like a whisper from heaven. He reveled in it. Wanted to bottle it up and keep the sweet sound with him wherever he went.

She opened her eyes and ran her hands up his arms as he enveloped her in an embrace. Her fingers continued until they met at the back of his neck, interlacing at the nape. His hands met at the small of her back, where they stopped and gathered her dress. The look in her eyes tugged his heartstrings.

Say it. Tell me what your heart wants. I need to hear you say it.

Her lips parted, the words playing there as she stared into his eyes. He braced himself, waiting for those words he wanted to hear. His heart no longer raced. It pounded so fiercely he thought it would beat out of his chest.

But she didn’t speak.

Let me know those lips.

His beautiful angel stood on her toes, her lips brushing his in a soft, sweeping motion.

To his dismay, the ecstasy that enveloped them ended. Their sweet moment stolen like a priceless jewel. The heat of her body, of their passion, tore from his soul as she pulled away.

His disappointment consumed him.

The tears forming in her eyes glistened as a sunray filtered through the dangling branches. Her bottom lip quivered.

“What’s wrong?” he asked, his voice cracking between words as he brushed a tear from her cheek. He feared that he already knew the answer, yet was still desperate for her to prove him wrong.

“You have to wake up, my sweet,” she said, her voice urgent, desperate.

“I’m not asleep. How can I wake up if I’m not sleeping?” He reached for her, wanting to pull her against him, to bask in the warmth of her touch.

She took a step back, tears sliding down her face, lips turning down in a frown. “You must.”

“No,” he begged. “Don’t go. Stay here with me.” His eyes, heavy with sadness, pleaded with her to remain.

His voice betrayed him when nothing more than a whisper passed over his lips. “Stay.”

He reached out to her. This time, when he touched her skin, or what should have been her skin, the warmth was gone. There was nothing.

His heart squeezed. He tried again, reaching for her, but his fingers caressed nothing but air. His eyes widened.

Her image weakened. She reached her hand toward his face, as though to stroke it. He couldn’t feel the warmth, just a gentle breeze blowing through his hair.

Though her silhouette faded, her voice carried once more to his ears. “Wake up. Please, wake up…”

His heart grew strained with disappointment as the scenery slowly blurred and vanished. He kicked his legs, trying to ground himself as he tumbled into an abyss of darkness. He searched for something to catch him, to stop his descent into black. Nothing was there.

Suddenly, his body jerked into a sitting position as he gasped. His eyes burned. Bright light reflected off the walls surrounding him.

He gazed around the room with desperate eyes.

His heart pounded fiercely as he searched the room.

She has to be here.

He wanted to scream her name, wanted to beg her to return, but couldn’t. He didn’t know her name. The room spun, or at least he thought it did. Maybe it was his head
.
Squeezing his eyes shut, he grabbed his head, held it, and tried focusing again,. Inhaling deeply, he smelled the sweet scent of sandalwood.

He opened his eyes, again, taking in beige-colored walls, an oak chest of drawers, clothes strewn across the floor. When his eyes settled on a pair of black, snakeskin boots, his heart panged.

Of course. I’m here. But that means—

He was home, in his bedroom, alone. He fell back into the bed as the realization burned into his stomach. Another dream…it was just another dream
.

There was no golden-eyed angel.

The only thing that remained from the dream was the wicked headache. As much as he wanted to cover his head and never leave the bed, the aspirin in the bathroom called to him.

Wicked Man by Beth D. Carter
No Place to Run by Maya Banks
Something Girl by Beth Goobie
Playing with the Grown-ups by Sophie Dahl
Affliction Z (Book 3): Descended in Blood by Ryan, L.T.
Coda by Liza Gaines
Death by Haunting by Abigail Keam
Losing It by Sandy McKay
What the Sleigh? by Mina Carter
In Your Corner by Sarah Castille