Read Where Have All the Bullets Gone? Online

Where Have All the Bullets Gone? 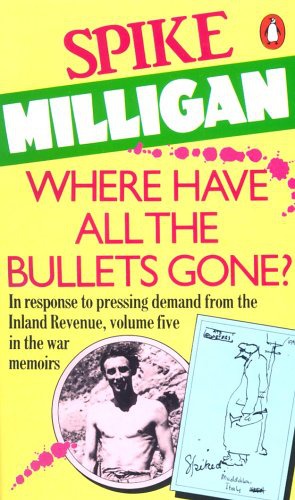 Where Have All The Bullets Gone?

T
he title of this book is a phrase remembered down the years. As I was lying on a makeshift bed in a rain-ridden tent alongside a Scots Guardsman, Jock Rogers, in a camp for the bomb-happy miles behind the firing line, I realized that for the first time in a year and a half, I was not worrying about mortar bombs, shells or Spandaus, and I said to him “Where have all the bullets gone?” I had totally forgotten this utterance until one night, during a visit to South Africa, I was arriving at the theatre and there outside the stage door was the tall lean Scots Guardsman, now grey but still as positive as ever. “Where have all the bullets gone?” he said. A quick drink and we were back to those haunting days in Italy in 1944, at the foot of Mount Vesuvius, with lava running in great red rivulets down the slope towards
us
, and Jock taking a drag on his cigarette and saying, “I think we’ve got grounds for a rent rebate.” He was one of many who entered and left my life in the years 1944 and ‘45, and in this book I have begun the story with my leaving the front line Regiment (19 Battery 56 Heavy Field RA) and frigging around in a sort of khaki limbo until someone found a job for me to do. It was all to lead to my making the world of entertainment my profession, but when you think that you have to have a world war to find the right job, it makes you think. Here it is then.

W
hat
is
an Afragola? An Afragola is a small grotty suburb of Bella Napoli. Named after a Centurion who performed a heroic deed against Spartacus and Co: he hit one of them and in return was killed. A grateful Emperor named this spot in his honour. It was a spot I wouldn’t give to a leopard. A field adjacent to this ‘spot’ is now a transit camp for ‘bomb-happy’ soldiers and
I
was now ‘bomb-happy’, having been dumped here, along with some untreated sewage, following treatment at No. 2 General Hospital, Caserta. After several medical boards, I was down-graded to B2, considered loony and ‘unfit to be killed in combat’ by either side. My parents were so disappointed.

It’s a bleak misty day with new added drizzle for extra torment. Mud! How did it climb up your body, over your hat, and back down into your boots? The camp’s official title is REHABILITATION.

Rehabilitation
: Dealing with the restoration of the maimed and unfit to a place in society.

So!
Now
I was maimed, unfit, and about to be restored to a place in society! The camp was a mixture of ‘loonies’ and ‘normals’. One couldn’t tell the difference, save during air-raids when the loonies dropped everything and ran screaming in the direction of away, crying ‘Mummy’. Today mud and men were standing around in huddled groups or sitting in the tents with the flaps up; our camp emblem should have been a dead hippopotamus. A Sergeant Arnolds appears to be ‘running the camp’…into the ground. He was to organization what Arthur Scargill was to landscape gardening. Would I like to be a unit clerk? Why? He had spotted a pencil in my pocket. The job has advantages — excused parades for one, and I sleep in a large marquee, which is the office. Having a tilly lamp put me in the ‘that rotten bastard can read in bed’ category.

At ten of a morning, a lorry would arrive bearing the latest intake of ‘loonies’. I would document them on large foolscap forms that were never asked for, nor ever seen again. The weather is foul, or more, duck. The damp!

Matches, like Tories, wouldn’t strike, fags went out and never came back, paper wouldn’t crackle, blankets had the sickly sweet smell of death. Men took their battledresses to bed to keep them dry and, sometimes, for companionship.

From the pelting rain a lone guardsman reports to the tent, wrung out — he could become a tributary of the Thames. He’s got fish in his pockets and is going mouldy. Tall, thin, a dark Celtic image, a Scots Guard, though covered in so much muck he could well be a Mud Guard. He dumps his kit in the marquee. It goes Squeegeee! Sergeant Arnolds cautions him: “Yew, kinnot sleep hin ‘ere.” The guardsman’s face screws up: “I’m fuckin’ stayin’ in here Jamie, and no cunt is gonna ha me oot.” Arnolds exits muttering threats. Guardsman ‘Jock’ Rogers becomes resident and, to save face, Sergeant Arnolds appoints him ‘Runner’, even though he only walks.

Helping lose the war is the army food. Cordon Brown. Bully beef! The meat in these tins was from beasts, proud descendants of cattle introduced by the Conquistadores of Cortez to graze and grow fat on the lush sunlit pastures of the Aztecs. Now lukewarm bits of them were floating around my mess tin, in watery gravy. “I’ve seen cows hurt worse than this and live,” says Guardsman Rogers. I had never seen transparent custard before. Rogers is convinced that the cooks will be tried as war criminals. A camel couldn’t pass through the eye of a needle, he says, but his breakfast could.

I look up from my forms. It’s my old D Battery Skipper, Captain Martin.

“What are you doing here?”

I say I’m doing my best. He shoots a glance at my sleeve. “My stripes are at the cleaners, sir, getting the blood off.”

I tell him I’m here because I’m a ‘loony’. He departs for the UK

F
ighting on the Cassino front is savage, like World War I.

My God! They’ve bombed the Monastery into rubble. I can’t believe it. It’s true. We must be bloody mad…I know the head Abbot was, oh the bill for repairs…

New intakes are arriving. All ask that haunting question.

“What’s going to happen to me?” I try and reassure them.

“You’ll be OK here, chum.” I wished I could have said: “I see a dark millionairess who will soothe the swelling and lay hands on you.”

Hope is coming! An ENSA Concert Party! Strong men broke down and cried, others knelt and prayed, the rest faced England and sang ‘Jerusalem’. Would it be sing-you-to-death Gracie Fields? Michael Wilding and his wig? In anticipation we all waited in a muddy field for its arrival. It appeared in the form of a large American lorry which backed towards us. On the tailboard a sign:
ENSA PRESENTS THE TAILBOARD FOLLIES
. The tailboard is lowered by a dwarf-like driver (cheers). The back flaps still hanging, the bottom half of a piano and a pianist are revealed, also the bottom half of a man in evening dress who throws up the flaps (cheers). He is a middle-aged man who has been dead ten years. He wrestles a microphone down to his height. “Last man was taller than me,” he says in the embarrassed tones of a comic who will never make it. “Well,” he chortled, “here we are.” Bloody fool, we all knew where we were. “First, to cheer you up, is our pianist Doris Terrible!” (Cheers). This is the old dear whose top half now reveals that she’s about sixty- five, and also dead. Heavily rouged and mascaraed, a masterpiece of the embalmer’s art, she plunged into the piano as if it were a wash tub. ‘Ma, he’s making eyes at me’, ‘Blue Birds over the White Cliffs of Dover’. On she thundered, the lorry shaking under the assault. We give her an ovation. “Now boys,” she yodelled, “what would you like to hear next?” A Cockney voice: “We’d like to hear some bloody music!” She pretends to laugh, but we notice her hands are clenching and unclenching like the Boston Strangler’s, whom she later became. Again the mike-wrestling compere. He tells a few crappy gags. I suppose he meant well, but then so did Hitler. Ah, this is better! The Rumpo Twins! Two blondes, dressed as sailors with short skirts, tap dance and sing through ‘The Fleet’s in Port Again’. Big cheers, whistles, and “Get ‘em down.”

“You’re lucky to be anywhere tonight.” A voice.

“Ha ha ha-er’ says the singer, meaning ‘You Bastard-er.” “I would like to sing the Bowmen of England-er.”

Mrs Terrible thunders the intro. Now, it so happens, at that very moment, a squadron of Heinkel bombers, with the engines cut, were gliding in to bomb Naples and/or Mrs Terrible and her piano. The engines roar into life, followed by the ascending banshee wail of the sirens, which synchronize with the opening of the tenor’s mouth. “My God,” said Guardsman Rogers, “he’s singing the air-raid warning.” Bombs start to drop, the entire audience vanishes and the driver slips the lorry into gear and drives away. I watched transfixed with laughter as the tenor, still singing ‘The Bowmen’ was transported to safety, staggering and holding the sides of the lorry as they turned left and drove up the road to Afragola. He was still in full song as he disappeared into the darkness and I could only wonder when he stopped — did he reach Cassino? They don’t write songs like that any more.

Ve are breaking up zer Tailboard Follies, for zem zer war is over. Next time, Tommy Trinder, Ann Shelton and Micheal Wilding and his wig!

T
he day after, a notice appears on Part Two orders: “The ENSA Concert is cancelled until further notice.” The war seems to have stopped, the weather and casualties have ground our advance to a halt. If no news is good news, we must all be delirious with happiness. Guardsman Rogers has been posting little pieces of mud home. “Dear Mother, This is a piece of mud. When you have enough, stand on it, and have a holiday in sunny Italy.” The days pass, life is like a clock with no hands. — Wait! Excitement beckons. An Inspection? INSPECTION???? HERE??? Everybody’s covered in mud! We’re ankle deep in it! We are all shit order! Yet, somewhere the British Army have found a Colonel suffering from I-must-have-an-inspection withdrawal symptoms. A BBC documentary of what followed, would go thus:

Well here we are on the great field of mud inspection parade (sound of rain, thunder and groans). Some ten thousand tons of mud have been flown in especially to simulate the Somme. The troops are wearing their best battledress with their best mud on it. It’s a proud sight as the Colonel walks along the ranks of slowly sinking men. He’s stopped to talk to a soldier in a hole. But it’s too late, he’s drowned.

It was a proud day for the British Army and a hysterical one for me. If only Hitler had known.

The Scarlet Fig: Or, Slowly Through a Land of Stone, Book Three of the Vergil Magus Series by Avram Davidson
The Winter Wedding by Abby Clements
Valley of the Shadow: A Novel by Ralph Peters
Dark Layers Volume 2: Dark Layers by Gray, A L
Velo de traiciones by James Luceno
Submission by Michel Houellebecq
One Bright Star by Kate Sherwood
The Apostate by Jack Adler
The Joy of Sex by Alex Comfort
Jake: The Sinner Saints #3 by Adrienne Bell