Read Where the Secret Lies Online

Where the Secret Lies 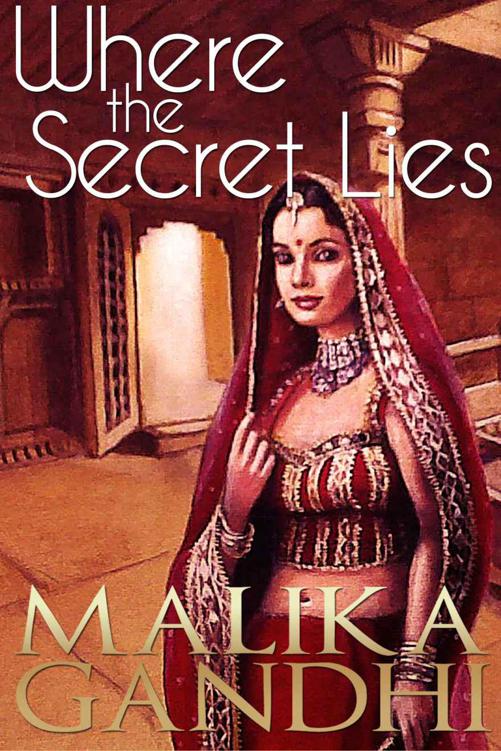 Where the Secret Lies

All Rights reserved. No part
of this publication may be reproduced, copied, stored in a retrieval system, or
transmitted, in any form or by any means, without the prior written consent of
the copyright holder, nor be otherwise circulated in any form of binding or
cover other than that in which it is published and without a similar condition
being imposed on the subsequent purchaser.

A CIP catalogue record for
this title is available from the British Library.

A note from the
author:

Where the Secret Lies
is written from the perspective of two central characters, Anjali and Arianna.
Both are from different eras – 1947 and 2012.

When a new character is speaking, the name will appear at
the top – Anjali/Arianna.

Anjali heard her sister’s screams
clearly, a lost voice amidst chaos. Her heart pounded; panic making her unable
to breathe in the dust-ridden air. She crouched under a tea stall; her face masked
with sweat and dirt.

People shouted, screamed and
cried, running from compartment to compartment, looking for their families. A
group wielding machetes and knives entered the station. Emotionless, their
intent clear – KILL.

Anjali’s frantic eyes tried to
find Neha and Sunil - her sister and brother-in-law, but she only saw bloodthirsty
men killing innocent victims, cutting throats and torsos. A woman fell in front
of her.

Her dead eyes stared. Blood
spilled from her half-mutilated breast.

Anjali’s cry never left her. She turned and vomited.

‘There! Under there, get that
girl!’

‘No!’ Anjali screamed, backing
away from the man’s groping hands. She kicked his face.

Anjali crawled out and ran into the crowd. Pushing
through, she found herself out of the station. She did not stop. Her chest
tightened, her breathing erratic, she had to carry on. Anjali glanced back; the
men had not given up. Fresh tears sprang to her eyes, she tried to run faster, but
her legs slowed. She could not go on anymore...they would rape and kill
her...but she was tired...

Anjali sank to the
blood-drenched ground, ready to make herself their next victim.

‘Do not be a coward. Think of
your sister. You must run, you must live!’ a voice said inside her.

Anjali summoned all of her remaining strength
and pulled herself to her feet.

The men walked towards her now,
hatred and lust etched on their faces. A smile broke out amongst them. They
adjusted their caps. Anjali stumbled back, almost falling over.

They laughed. Flexing their fingers,
they lunged but Anjali was fast. Trees and houses replaced the station as she
ran...houses, once homes alive with light and laughter – now empty shells. She
tore her eyes away and ran onto a dark melancholy dirt road. She slipped into a
small alley.

‘Be brave, Anjali,’ she
whispered into the still air as tears threatened to spill.

Her back against a door, she
tried to control her fear. Before she could react, the door opened. A rough
hand smothered her mouth, dragging her into the building. Her eyes wide, she
struggled to be free.

‘Be still,’ said the deep voice
of a man. ‘Keep quiet, you will be safe here. Wait until they leave.’

Anjali let him hold her and
waited. Moments later, the man released her. She turned to face her rescuer.

Arianna flicked through the magazine, not paying attention
to the pages. She sighed, she longed for her final year to be over. Arianna
flung the magazine to the side and opened her portfolio.

It was nearly complete.

‘Pull yourself together Ari,’
she said to herself. ‘You don’t want to fail!’

‘Yes,’ the voice of her dad boomed
in her head. ‘If you must do a degree in Fashion then you must pass! Look at
your great granddad, your granddad, and myself, all accountants in the family.
If you wanted, you could be one too.’

Arianna’s father did not like
her chosen future career. He liked her be a “professional”.

Typical, thought Arianna. She closed her
portfolio and made her way to the top of the stairs where she stood. Her mother
had the Indian channel on loud – a normal occurrence. Arianna glanced at her
watch.

Nine thirty, too early to go to
sleep. Her father was already in bed; his snoring infamous in the
household.

Maybe she should try to
finish the drawings...or perhaps bother her baby sister.

Younger by two years and a
bookworm, Tianna was the perfect daughter, smart (far smarter than her) and
sensible too. She wanted a career in medicine, making her father very happy.

The phone went off in her pocket. Arianna checked the screen
– a message from Jai, her friend and school companion from years gone by.

At Georgina’s party. Shall I come and pick you up? Miss you here, Jai

Oh no. She quickly text back.

No deal. Have to finish my portfolio. It’s due tomorrow! See you later,
have fun!

She hit the Send button and went
back to her bed, flicking the folder open. Putting her phone to silent, she
began to write notes and draw.

The alarm didn’t wake Arianna; it was her mother bellowing
from the top of her voice.

Arianna opened her eyes and
checked the clock. Damn! Already 8.30! Her portfolio was due in half an hour!
Double damn! She flung her covers off, hastily showered in two minutes, brushed
her teeth, and dressed. Shaking her hair out through her hands, she grabbed her
bag and sprinted down the stairs.

‘Drink some chai beta, before
you rush out the door,’ her mother held a cup at the foot of the stairs.

Arianna stopped and gulped the
chai. Kissing her mother’s cheek, she rushed to the car where her father was
waiting.

‘So, did you manage to hand in the assignment?’ Jai joined
Arianna at the college entrance.

Jai was very handsome. Everyone
thought they were a couple but she stopped that rumour at once. No one believed
her of course.

‘Yes, I hope I get a distinction,’
said Arianna. Jai laughed.

‘Ari, you are so bright, the
stars look dim next to you,’ he said poetically.

‘You are so cheesy! Okay, alright,
I am a genius!’ Arianna laughed.

‘So how was Georgina’s party?
Who was there?’ Arianna changed the subject.

‘Everyone and anyone celebrating
their end of year exams, apart from you. You were missed Ari,’ Jai pouted.

Arianna gently punched him in the
arm.

They walked in silence towards
the bus stop. Jai and Arianna lived a few streets away from each other making
it convenient for them to visit each other often. Jai didn’t have any more
exams, he finished last week.

‘Ari, how do you feel like going
on a small trip next weekend, now that you have finished?’

‘What kind of a small trip?’

‘We are going to Bournemouth. A
group of us, come on, it will be fun,’ Jai gave Arianna his dimpled smile.

Arianna sighed. She wanted to
go, she did, but she agreed to help her mother with some pre-holiday errands.

‘I will ask, okay? No promises. Anyway, it
might be a no. Mum wants me to go to Wembley with her to do the India
shopping.’

The bus arrived and they climbed
on board. They found two seats at the back.

‘My family and I are going to
India in the summer, remember I told you? We have a lot of shopping to do – you
know, for my thousands of relatives. That is what I mean by “India shopping”. Oh
Jai, you do need to learn

so much of our culture yet,’ Arianna shook her head in mock
dismay.

‘I hope they don’t intend to get
you married there,’ concern rang in his voice.

‘What brought that on?’

‘I am not getting married, relax.
It’s my cousin’s marriage in Lucknow. It is going to be in a lovely haveli
(mansion). Lucknow is supposed to be beautiful with panoramic scenery. I am really
excited – I will be meeting my cousin, Khushboo in such a long time.’

‘Is she the one getting
married?’ asked Jai.

‘No, it’s another cousin of
mine. Hey, are you alright?’

Jai seemed, well not himself.

‘How long are you going for?’ he
asked.

‘Don’t forget to send me a
postcard then,’ his tone changed, he wasn’t his cocky self anymore.

Before Arianna could respond,
the bus stopped and Jai jumped off. He didn’t even wave a goodbye.

Arianna mulled over Jai’s strange behaviour as descended at
her stop. Why did he behave that way? Jai normally had a carefree attitude and
dismissed serious conversations with a shrug. She didn’t understand, what just
happened?

Arianna’s mother was making roti
(chapatti) when she arrived home. She inhaled the fresh aroma and her stomach
responded.

‘Oops,’ she giggled, giving her mother
a kiss on the cheek.

Arianna began to plate a dish.

‘Then you did well,’ her mother
sat opposite he. She put another hot roti on her plate and added more
cauliflower sabzi.

‘Oh I am so stressed beta, there
is much shopping to do.’

Arianna’s mother took out a long
list from her apron pocket.

‘We need to buy three saris for
your aunties, five packets of almonds, two packets of clove...tut tut, so many
demands. Do you know they can get all of this in India? But no, they want
foreign goods they say. Are they fools? All this comes from India!’

‘Then don’t take them,’ Arianna
thought it was simple.

I will not hear the end of it!’

‘Where is Tianna? Is she not
eating?’ Arianna asked. ‘Where is dad?’

‘It is only you and I tonight. Arianna,
please call your father Papa, it sounds so much better,’ chastised her mother.
‘He is out with his group of friends, probably at the pub.

Tianna is in her room, studying. She has
already eaten.’

After dinner, they washed the
dishes and cleaned the kitchen before settling in front of the TV. The Indian
programme turned Arianna’s thoughts to their forthcoming visit.

Arianna had not been back to India in ten years and was
quite excited and a little apprehensive too. The accent was very different to her
own. Will her cousins, aunties and uncles and other distant relatives be able
to

understand her and she them? Speaking to them over the phone
always made her feel uncomfortable.

‘I cannot “talk” over the phone,’ she moaned
to Tianna one day.

‘I seem to get stuck
on what to say.’

‘You should use email,’ advised
her sister wisely, as she switched on her ereader.

Arianna thought it was a
fantastic idea. She became an email wizard and spent a lot of time on email
chat with her cousin, Khushboo (who promised to be her guide throughout the
visit) but with her other relatives too. Arianna hoped four weeks in India
would be long enough for the holiday.

The phone rang and rang. Why is no one picking the damn
thing up?

Damn! Arianna crawled out of bed
and realised the ringing was coming from her mobile. Drat! She searched under
the bed and under her pillow. The phone was not there.

The phone was still ringing. She wished it
would just go on to voicemail. Ah! She grabbed her phone from under her dresser
and hit the pick up button.

The Asylum by L. J. Smith
The Taint and Other Novellas by Brian Lumley
Fish Stick Fridays by Rhys Ford
Caught in the Act: Book Two: Independence Falls by Sara Jane Stone
Lost in Love by Kate Perry
Sidewinder by J. T. Edson
Turning Up the Heat by Laura Florand
Rough and Tumble by Crystal Green
Aurelia by Anne Osterlund
After Hours by Dara Girard