Read Which Lie Did I Tell? Online

Which Lie Did I Tell? 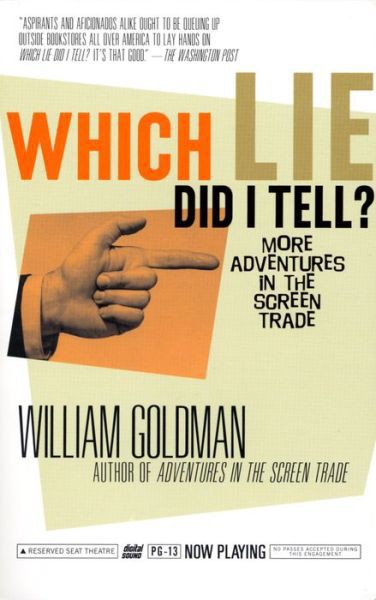 Acclaim for
WILLIAM GOLDMAN’s
WHICH LIE DID I TELL?

“[C]ompelling … full of practical advice for the aspiring screenwriter.”

“
Which Lie Did I Tell?
is an invaluable guide for any screenwriter—perhaps the best there is. At once anecdotal and anarchic, gossipy and guiding, professional and provocative, it surpasses the justly celebrated original…‖. This is an excellent guide to screenwriting … an essential document of the movie industry in the late twentieth century.”

“Required reading for anyone who thinks they want to quit their job and write a script.”

“This is entertaining—even by Goldman’s usual standards. Just about the most fun you can have reading.”

“Two-time Oscar-winning screenwriter Goldman follows up his irreverent, gossipy, and indispensable screenwriting bible,
Adventures in the Screen Trade
(1983), with this equally wise, tart, and very funny account of the filmmaking process.”

“William Goldman has done it again with his highly entertaining and self-deprecating humor. He’s one of the best writers I’ve ever had the pleasure of working with. He takes Hollywood apart—which, in this case, is a very good thing.”

Vintage and colophon are registered trademarks of Random House, Inc.

For Ingmar and Ernie and Bob
For Bobby and Peter and Scott
For Joel and Ethan and Nora
For Callie and Tony and John.
And Sue

For screenwriters suffering everywhere
(It’s what we do)

I. More Adventures
The Leper
[1980–85]
Memoirs of an Invisible Man
[1986]
The Princess Bride
[1987]
Misery
[1990]
The Year of the Comet
(Alas) [1992]
Maverick
[1994]
The Ghost and the Darkness
[1996]
Absolute Power
[1997]
II. Heffalumps!!!
There’s Something About Mary
When Harry Met Sally
North by Northwest
The Seventh Seal
Chinatown
and
Fargo
Butch Cassidy and the Sundance Kid
III. Stories
Story One:
The Old Guy
Story Two:
The Good Guy
Story Three:
The Mastermind
Story Four:
The Dolphin
IV. The Big A

This book began a decade ago because of one single moment that happened at Oberlin College.

One of the salvations of my life is that I went to Oberlin—a great school if you don’t mind the weather and if you’ve realized that it’s okay to be just a little bit strange.

Anyway, there I was back in Ohio and one afternoon I met with a bunch of student writers to answer their questions about Hollywood. I remember the moment so clearly. This girl stood up. Slender, wearing red, so obviously bright and intense, and before she spoke I realized whatever she was about to ask
mattered.
She was leaning in toward me and she was almost trembling, and when she spoke it was with such clarity and power. These were her words:
“Mr. Goldman, Mr. Goldman, do you always begin your second theme by page seventeen?—”

I was so stunned. The question would not stop echoing inside me:
“Mr. Goldman, Mr. Goldman, do you always begin your second theme by page seventeen?—”

Because, you see, I didn’t know what a second theme
was.
I literally did not know what language she was speaking. But she had this nugget, this bit of data, and she was going to build her church on it—and it would not stand. Her church would crumble the moment weight was applied. (There are, scattered throughout this book, sidebars that deal with specific questions. I wish I’d had a sidebar for that girl in red.)

But she made me realize, truly she did, that I would have to write another book about screenwriting. Because movies are not about second themes or about dialogue or pretty stars. Because if screenplays are structure, and they are, then movies are story.

And this is a book about storytelling on film …

It’s also about the screenwriter’s life. Has to be. You meet people in this business, and one thing you must know is that just about everyone you come in contact with seems shockingly normal. Executives, producers, directors, stars.
Do not be fooled.
Since movies succeed by word of mouth, something you cannot manufacture, everyone in the business is constantly in fear of losing their spot by the fire. Since they have no idea what got them there in the first place, this all makes for a certain lunacy and insecurity. (Everyone assumes, correctly, that being writers, we are already loony and insecure.)

I was in Las Vegas once with a producer who was promoting his various projects on the phone. We were in his hotel suite and he clearly wanted me to listen, since he chose not to go into the bedroom. On and on he went, phone call after phone call, spouting inaccurate grosses, potential star castings, stuff like that.

Perversely, since he wanted me to know what a big deal he was, and since I already did know he was an asshole, I decided to hear nothing. I picked up a copy of
Sports Illustrated,
read for quite a while—

Until suddenly I heard my name, whispered sharply, “—Bill—
Bill
”—I glanced over and there he was, his hand over the mouthpiece. Then came these words:
“Which lie did I tell?”

Understand, he had no look of shame on his face. This was all said in the interest of accuracy.

Storytellers tell lies too. We must. Story ideas surround us, but they need shading, shaping, climaxes, beginnings; that’s our job. What we must try and learn is which are the best lies, best in the sense of helpful. When we try and tell our stories, we all need help. I hope there’s some here. For you.

I don’t think I was aware of it, but when I started work on
Adventures in the Screen Trade,
in 1980, I had become a leper in Hollywood.

Let me explain what that means: the phone stopped ringing.

For five years, from 1980 till 1985, no one called with anything resembling a job offer. Sure, I had conversations with acquaintances. Yes, the people whom I knew and liked still talked to me. Nothing personal was altered in any way.

I talked about it recently with a bunch of young Los Angeles screenwriters, and what I told them was this: If I had been living Out There, I don’t think I could have survived. The idea of going into restaurants and knowing that heads were turning away, of knowing people were saying “See him?—no, don’t look yet, okay, now turn, that guy, he used to be hot, can’t get arrested anymore,” would have devastated me. In L.A., truly, there is but one occupation, the movie business. In New York, the infinite city, we’re all invisible.

Example: my favorite French bistro is Quatorze Bis, on East Seventy-ninth. Best fries in town, great chicken, all that good stuff. Well, I was there one night last year when another guy came in, and we had each won two Oscars for screenwriting, and we lived within a few blocks of each other—

—and we had never met. (It was
Robert Benton.)

Impossible in Los Angeles. But that kind of thing was my blessing during those five years.

My memory was that the leprosy didn’t really bother me. I asked my wonderful ex-wife, Ilene, about it and she said: “I don’t think it did
bother you, not being out of Hollywood, anyway. But one night I remember you were in the library and you were depressed and I realized it was the being alone that was getting to you. You always enjoyed the meetings, the socialness of moviemaking. You were always so grateful when you could get out of your pit.”

I wrote five books in those five years (couldn’t do it now, way too hard) and then the phone started ringing again.

This is why it stopped in the first place.

There is a famous and
amazingly
racist World War I cartoon that showed two soldiers fighting in a trench. One was German, the other an American Negro who had just swiped at the German’s throat with his straight razor. (When I say racist, I mean racist.) The caption went like this:

The point being, in terms of my screenwriting career, I never turned my head. Looking back, there was no real reason to. I was on my hot streak then. I was a Good Housekeeping Seal of Approval in those years. Between ’73 and ’78 this is what I wrote:

If you had told me, that 1978 November day when
Magic
opened, that it would be
nine years
before my next picture appeared, I doubt I would have known what language you were speaking.

It wasn’t as if I’d stopped writing screenplays after
Magic.
But the lesson I was about to learn was this: studios do not particularly lose faith in
a writer if a movie is terrible. Producers do not forget your name if a movie loses lots of money. Because
most
studio movies lose lots of money (they survive on their hits). If, say, they chose directors who had only hits, they would be choosing from a practically nonexistent list. All anybody wants, when they hire you, is this:
that the movie happen.