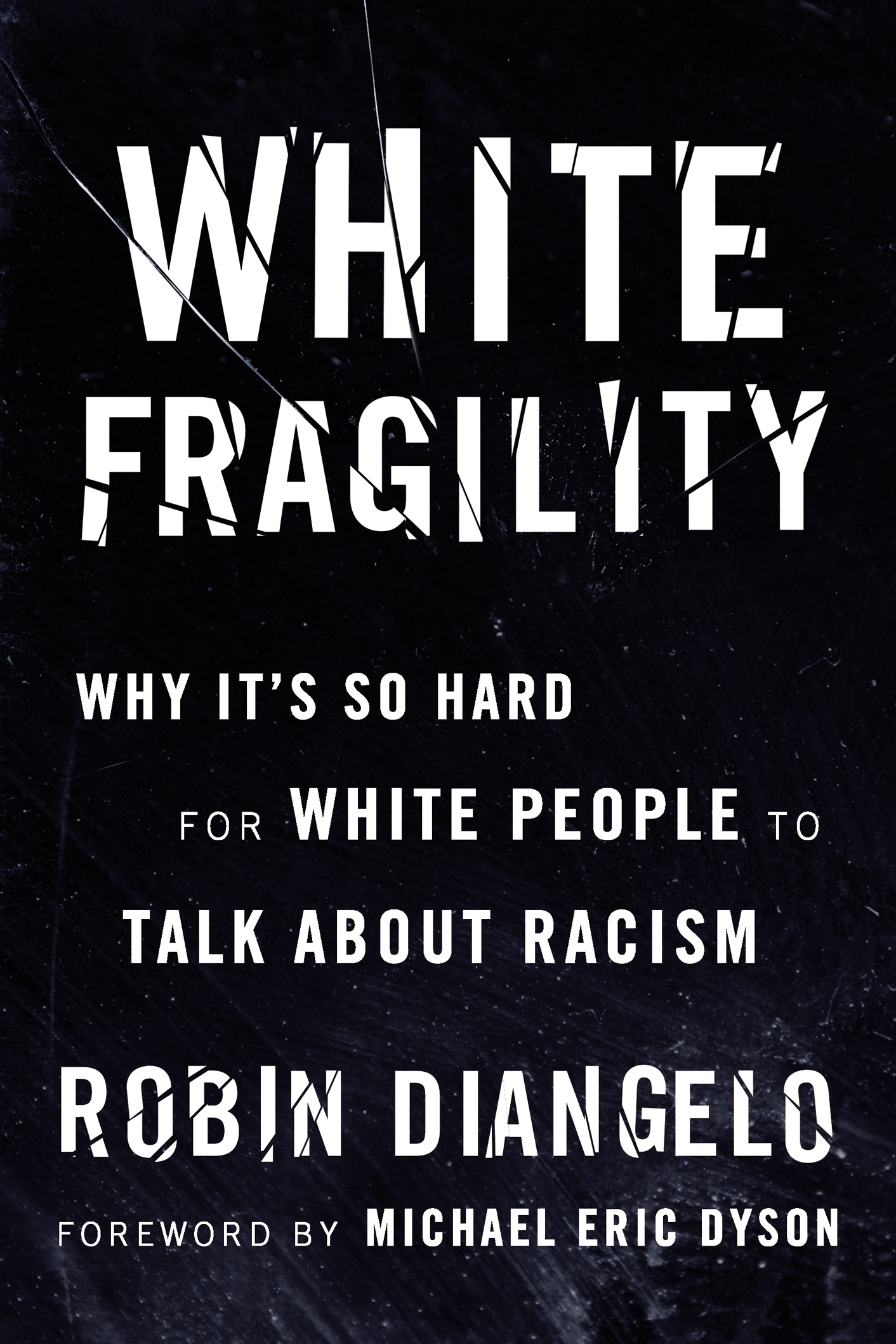 “
White Fragility
is a rare and incisive examination of the system of white-body supremacy, which binds us all as Americans. Robin DiAngelo explicates the underlying Western ideologies of individualism and presumed objectivity that tighten those bonds. But she doesn't just analyze this system. With authenticity and clarity, she provides the antidote to white fragility and a road map for developing white racial stamina and humility.
White Fragility
loosens the bonds of white supremacy and binds us back together as human beings.”

author of
My Grandmother's Hands
and
Rock the Boat

“What an amazingly powerful book Robin DiAngelo has written! This remarkable book encourages folks to embrace a more deeply nuanced exploration of white culture and dominance and, as such, will be a great contribution in promoting the necessary policy change and healing that this country requires. Dr. DiAngelo's work in deconstructing whiteness is not only brilliant, it is written in a way that is crystal clear and accessible to each and every reader. While this is a powerful scholarly analysis of white fragility, it is also an invitation to engage in deep personal inquiry and collective change. As a woman of color, I find hope in this book because of its potential to disrupt the patterns and relationships that have emerged out of long-standing colonial principles and beliefs.
White Fragility
is an essential tool toward authentic dialogue and action. May it be so!”

president of World Trust and director of
Mirrors of Privilege: Making Whiteness Visible

“As powerful forces of white racism again swell, DiAngelo invites white progressives to have a courageous conversation about their culture of complicity. To eradicate racism, she encourages white people to relinquish ingrained hyper-attachment to individualism and embrace predictable patterns of their own racial group.
White Fragility
provides important antiracist understanding and essential strategies for well-intentioned white people who truly endeavor to be a part of the solution.”

author of
Courageous Conversations About Race

“White fragility is the secret ingredient that makes racial conversations so difficult and achieving racial equity even harder. But by exposing it and showing us allâincluding white folksâhow it operates and how it hurts us, individually and collectively, Robin DiAngelo has performed an invaluable service. An indispensable volume for understanding one of the most important (and yet rarely appreciated) barriers to achieving racial justice.”

author of
White Like Me: Reflections on Race from a Privileged Son

“In
White Fragility,
Robin DiAngelo demonstrates an all-too-rare ability to enter the racial conversation with complexity, nuance, and deep respect. Her writing establishes her mastery in accessing the imaginal, metaphoric mind, where the possibility for transformation resides. With an unwavering conviction that change is possible, her message is clear: the incentive for white engagement in racial justice work is ultimately self-liberation.”

coauthor of
Beyond Inclusion, Beyond Empowerment: A Developmental Strategy to Liberate Everyone 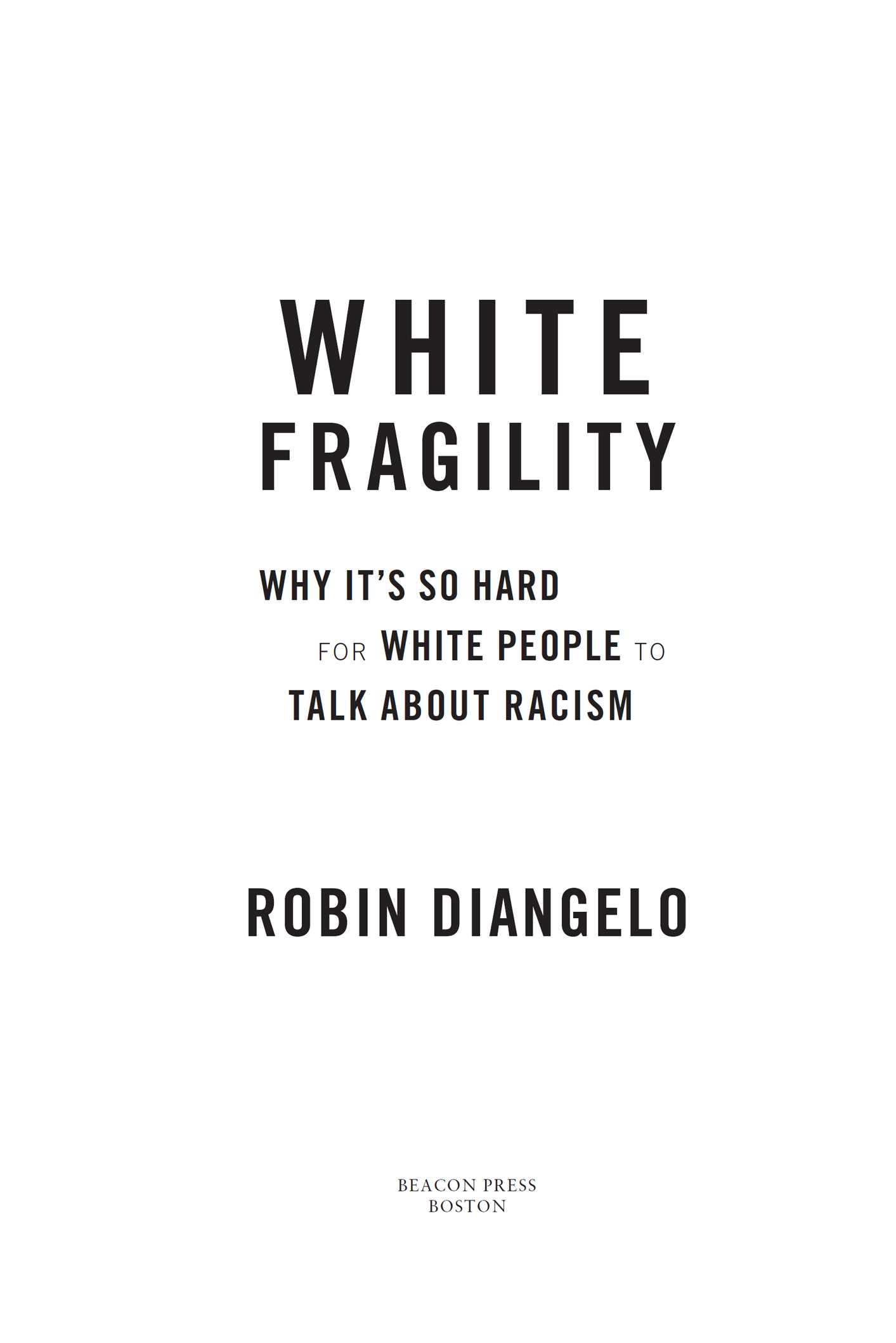 These ceremonials in honor of white supremacy,
performed from babyhood, slip from the
conscious mind down deep into muscles .Â .Â .
and become difficult to tear out.

Introduction: We Can't Get There from Here

4
Â Â Â Â How Does Race Shape the Lives of White People?

10
Â Â White Fragility and the Rules of Engagement

One metaphor for race, and racism, won't do. They are, after all, exceedingly complicated forces. No, we need many metaphors, working in concert, even if in different areas of the culture through a clever division of linguistic labor. Race is a condition. A disease. A card. A plague. Original sin. For much of American history, race has been black culture's issue; racism, a black person's burden. Or substitute any person of color for black and you've got the same problem. Whiteness, however, has remained constant. In the equation of race, another metaphor for race beckons; whiteness is the unchanging variable. Or, to shift metaphors, whiteness has been, to pinch Amiri Baraka's resonant phrase, the “changing same,” a highly adaptable and fluid force that stays on top no matter where it lands. In a sense, whiteness is at once the means of dominance, the end to which dominance points, and the point of dominance, too, which, in its purest form, in its greatest fantasy, never ends.

To be sure, like the rest of race, whiteness is a fiction, what in the jargon of the academy is termed a social construct, an agreed-on myth that has empirical grit because of its effect, not its essence. But whiteness goes even one better: it is a category of identity that is most useful when its very existence is denied. That's its twisted genius. Whiteness embodies Charles Baudelaire's admonition that “the loveliest trick of
the Devil is to persuade you that he does not exist.” Or, as an alter ego of the character Keyser SÃ¶ze says in the film
The Usual Suspects,
“The greatest trick the devil ever played was to convince the world that he didn't exist.” The Devil. Racism. Another metaphor. Same difference.

Robin DiAngelo is here to announce, in the words of evangelicalsâand rappers Rick Ross and Jay-Zâ“The Devil Is a Lie.” Whiteness, like race, may not be
true
âit's not a biologically heritable characteristic that has roots in physiological structures or in genes or chromosomes. But it is
real
, in the sense that societies and rights and goods and resources and privileges have been built on its foundation. DiAngelo brilliantly names a whiteness that doesn't want to be named, disrobes a whiteness that dresses in camouflage as humanity, unmasks a whiteness costumed as American, and fetches to center stage a whiteness that would rather hide in visible invisibility.

It is not enough to be a rhetorician and a semiotician to deconstruct and demythologize whiteness. One must be a magician of the political and the social, an alchemist of the spiritual and psychological too. One must wave off racist stereotypes and conjure a rich history of combatting white supremacy and white privilege and white liesâa history that has often been buried deep in the dark, rich, black American soil. DiAngelo knows that what she is saying to white folk in this book is what so many black folks have thought and believed and said over the years but couldn't be heard because white ears were too sensitive, white souls too fragile.

DiAngelo joins the front ranks of white antiracist thinkers with a stirring call to conscience and, most important, consciousness in her white brothers and sisters. White fragility is a truly generative idea; it is a crucial concept that inspires us to think more deeply about how white folk understand their whiteness and react defensively to being called to account for how that whiteness has gone under the radar of race for far too long. DiAngelo is wise and withering in her relentless assault on what Langston Hughes termed “the ways of white folks.” But she is clear-eyed and unsentimental in untangling the intertwined threads
of social destiny and political prescription that bind white identity to moral neutrality and cultural universality.

DiAngelo bravely challenges the collapse of whiteness into national identity. No less an authority than BeyoncÃ© Knowles recently remarked, “It's been said that racism is so American that when we protest racism, some assume we're protesting America.” DiAngelo proves that BeyoncÃ© is right, that the flow of white identity into American identityâof racist beliefs into national beliefsâmust be met head-on with a full-throated insistence that what it means to be American is not what it means to be white, at least not exclusively, or even primarily. This nation is far more complicated in its collective self-understanding. DiAngelo, in a masterly way, takes apart the notion that identity politics is a scourge, at least when it involves people of color or women. She blows down the house of white racial cards built on the premise that it can, or should, rest on something beyond identity politics.

DiAngelo forces us to see that all politics have rested on identities, and that those identities are critical features of wrestling with how we have gone wrong in the effort to set things rightâwhich too often has meant make them white. We cannot possibly name the nemeses of democracy or truth or justice or equality if we cannot name the identities to which they have been attached. For most of our history, straight white men have been involved in a witness protection program that guards their identities and absolves them of their crimes while offering them a future free of past encumbrances and sins.

Robin DiAngelo is the new racial sheriff in town. She is bringing a different law and order to bear upon the racial proceedings. Instead of covering up for a whiteness that refused to face up to its benefits and advantages, its errors and faults, she has sought to uphold the humanity of the unjustly maligned while exposing the offenses of the undeservedly celebrated.

White fragility is an idea whose time has come. It is an idea that registers the hurt feelings, shattered egos, fraught spirits, vexed bodies, and taxed emotions of white folk. In truth, their suffering comes from
recognizing that they are whiteâthat their whiteness has given them a big leg up in life while crushing others' dreams, that their whiteness is the clearest example of the identity politics they claim is harmful to the nation, and that their whiteness has shielded them from growing up as quickly as they might have done had they not so heavily leaned on it to make it through life.
White Fragility
is a vital, necessary, and beautiful book, a bracing call to white folk everywhere to see their whiteness for what it is and to seize the opportunity to make things better now. Robin DiAngelo kicks all the crutches to the side and demands that white folk finally mature and face the world they've made while seeking to help remake it for those who have neither their privilege nor their protection.

Jennifer Roberson - [Robin Hood 01] by Lady of the Forest
Mail Order Mayhem by Kirsten Osbourne
Astoria: John Jacob Astor and Thomas Jefferson's Lost Pacific Empire: A Story of Wealth, Ambition, and Survival by Stark, Peter
The Distance from A to Z by Natalie Blitt
Ghost Moon by John Wilson
Descent into Desire by Marie Medina
It Takes Two Book 5 by Ellie Danes
Wedding Date with the Army Doc by Lynne Marshall
Cycle of Lies: The Fall of Lance Armstrong by Macur, Juliet
Catch Her If You Can by Merline Lovelace