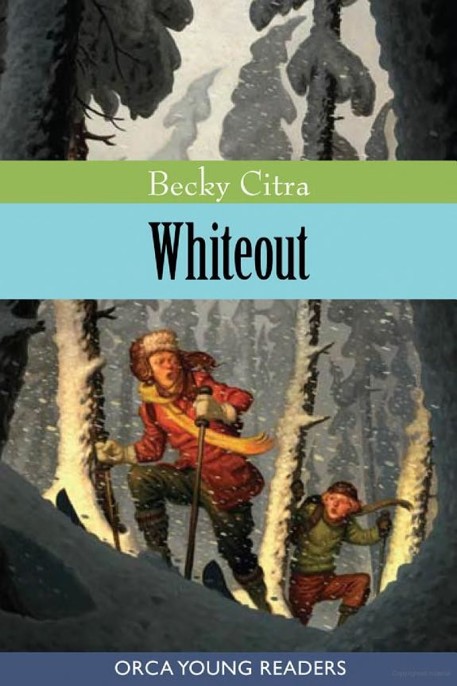 First published in the United States, 2009

Summary
: A near-fatal accident changes Robin’s relationship with her cousin.

To my father, for so many years of encouragement and support

...Heavy snowfall warning for Vancouver with thirty more centimeters expected tonight...Motorists are urged to stay off the roads unless absolutely necessary... Whiteout conditions...

Robin snapped the radio off. She was totally sick of doom-and-gloom weather reports. She released the drain in the kitchen sink and stared out the window at the frozen lake and the dull gray sky.

If the storm had waited just one more day, her cousin April and her Aunty Liz would already be here. They had planned to leave Vancouver that morning and make the six-hour drive to the ranch by midafternoon.

One more day
. The problem with Vancouverites was that they made a big deal out of a bit of snow. They should try living here at Bridge Lake where it snowed all winter long.

Boots stamped on the back porch. Dad stuck his head in the door, letting in a sharp smell of cold and snow. “Time to get the tree!”

“What?” Robin swung around. “We always wait for April. She’ll kill us.” She forced her voice to stay calm. “Besides, the highway was open again this morning. Aunty Liz said they were going to try.”

“It’s going to be dark soon,” said Dad. He shouted into the living room. “I need my tree-finding elf. Outside. Now.”

With a huge sigh, Robin gave in. She bundled six-year-old Molly into her purple dinosaur snowsuit while Dad went outside to start the snowmobile.

When they were ready, Molly clambered into the caboose behind the snowmobile. Their border collie, Hurly, leaped in beside her, wiggling with joy at being included. Then Robin climbed on the seat behind Dad and wrapped her arms around his puffy down jacket.

Dad headed toward their ranch gate. High snow-drifts lined both sides of the road. It was like being in a long white tunnel. Robin closed her eyes and tipped her face into the sharp air. For a few minutes, she slid away from her disappointment and lost herself in the roar of the snowmobile and the cold.

Just before the gate, Dad slowed the snowmobile to a stop and shut off the engine. The sudden silence settled over them like a soft blanket. Molly and Hurly clambered out of the caboose. They plunged up and down a snowbank, Molly puffing like a train and Hurly barking joyfully. Robin dug her mittens into her pockets and watched.

Dad shook snow off a young spruce tree. “This one?”

Robin shrugged. “Sure. It looks fine.”

“You’ve forgotten your lines.” Dad raised his eyebrows. “You’re supposed to say it’s too skinny, fat, tall, short, feeble, scrawny, none of the above or all of the above. You don’t say it’s fine until we look at every tree on this ranch and then come back to the first one we started with.”

Molly stopped halfway down the snowbank.

He pulled the cord on his chainsaw. It roared to life and sent Hurly scurrying behind the snowmobile, barking bravely. Dad cut the tree near its base and tied it to the back of the caboose. He brushed needles and snow off his jacket.

At the last minute, Robin decided to walk back to the house. She waited until the roar of the snowmobile had faded before she started trudging along the road, the snow squeaking under her boots. It had snowed again last night, and the gray sky looked heavy with the promise of more to come. It would be dark soon.

If
only
the storm had waited.

Up ahead, a row of Christmas lights twinkled on the barn roof. Christmas Eve! Robin’s favorite night of the year. Her dark mood melted away, and she broke into a run. After all, Aunty Liz would have phoned if they’d had to turn back. They were probably bumping over the cattle guard at the highway right now, and Aunty Liz was saying, “Rattle me bones!” like she always did.

Robin raced the rest of the way to the house. She stamped her snowy boots on the mat and went inside. The smell of burnt raisins hit her like a wall. A pot of mincemeat was bubbling over on the stove. Robin turned off the burner. She sucked in her breath.

What was going on? And why was the house so quiet? She peered into the living room. Molly was sprawled on her stomach, coloring a picture of a sleigh full of presents. She was scribbling over the lines with a red crayon. Totally un-Molly.

Robin frowned. “Where are Mom and Dad?”

“They’re upstairs talking. Gran phoned while we were out.” Molly picked up a green crayon and scratched at the paper covering with her fingernail.

Robin stared at the pile of torn crayon wrappings. “Don’t do that, Molly. You’re making a mess.”

She swallowed an uneasy feeling. She went upstairs and stood in the hallway beside her parents’ bedroom door. She could hear their voices, a little bit of Mom and a lot of Dad. Robin knocked. “It’s me.”

Molly was already there, squeezed up against Robin. She raced into the bedroom and scrambled up on the bed beside Mom.

Mom had been crying. Robin saw that right away. A thin icy prickle crawled up her back.

Dad stood up. He kept one hand on Mom’s hair. “Gran phoned while we were getting the tree. There’s been an accident.”

Robin’s head filled with a roaring noise. It was suddenly impossible to breathe.

“Whiteout conditions...twenty-car pileup...” The thunder in Robin’s head drowned out Dad’s words. She pressed her hands against her legs.

“Liz’s car slid sideways,” Dad was explaining in a steady voice. “A truck hit the driver’s side. April has some bruises and cuts, but she’s okay.” Dad reached down and covered Mom’s hand with his own. “Liz has been taken to the hospital, and Gran will phone us back as soon as there’s news.”

Questions spilled out of Molly. Did Aunty Liz get to ride in an ambulance? Was Gran going to sleep at the hospital too, like Mom did when Molly had pneumonia? Could they still come for Christmas anyway?

Molly didn’t get it. Robin pressed her fingernails into the palm of her hand.

Her little sister finally wound down, like a balloon losing air. “Are we still going to have supper and decorate the tree?” Molly asked in a small voice.

“Of course.” Dad charged into action. “Come on, Mol. Let’s go on a scavenger hunt in the freezer.”

Robin stared out the window. From here, the lights on the barn looked like they were suspended in nothingness. Red and green and blue stars.

Last night, on the phone, Aunty Liz had promised. “We’ll do our best to get there, sweetie. Our very best.”

A sick feeling washed over Robin when she thought of her reply. “You
have
to come, Aunty Liz.
Please, please, please
. I’ll never ever forgive you if you don’t.”

If only she could make those words go away. Maybe then Aunty Liz and April would never have tried to come.

The Christmas lights blurred together, and Robin blinked hard. Behind her, Mom said, “The important thing now is to save Christmas for you and Molly.”

The bedroom door closed softly. Robin hugged her arms to her chest, but she couldn’t stop shivering.

Christmas happened and it didn’t happen. Dad was on the phone a lot.

Going through the motions.

When they opened their presents and Robin saw her new cross-country skis, for a few minutes she managed to forget. Dad stuck a bow on Hurly’s collar, which made everyone laugh, and Robin’s gray cat, Jellybean, tunneled into the mounds of wrapping paper. The afternoon was harder. Robin and Molly took carrots to the horses, and part of Robin wanted to stay
outside forever. Mom cooked the usual turkey dinner, but everyone picked at their food. Molly protested when Mom wrapped the turkey wishbone in a paper towel to dry. “I want to make my wish
now
.”

Robin was glad when the long day came to an end and everyone could stop pretending. On Boxing Day morning, they drove Mom to the airport in Kamloops so she could fly to Vancouver.

Mom filled the two-hour drive with instructions. “Molly needs to get dressed for school before you put the cartoons on. And if she wants a show-and-tell, make sure she gets it the night before. She’s too slow in the morning.”

School wasn’t starting for another week, but of course Mom wouldn’t be back by then. She probably wouldn’t be home for ages. Robin stared out the truck window. Mom moved on to wearing helmets on the snowmobile. When she got to the emergency casseroles in the freezer, Robin tuned out.

The first week back at school, the weather turned drippy. On Saturday morning, Dad and Molly built a
snowman, and Robin tried skiing on the lake. The snow glommed on to her skis in thick wet clumps. Plowing through melted marshmallows would be more fun.

After a canned-soup lunch, Dad got ready for work. He drove a snowplow for the Highways department in the winter. “‘Rain, sleet, hail or snow, we must get through,’ or something like that,” he said cheerfully.

“That’s the mailman, Dad.” Robin stretched her mind through the afternoon. Five hours of Molly. “Can Kim come over?”

Robin got on the phone to her best friend right away. Good. Kim was mega-bored too. A pause, and then Kim announced happily, “Mom says she’ll drive me over.”

Robin set Molly up in the living room with the dvd of
Shrek
and then fielded questions about Aunty Liz and April while she heated the milk. No, she didn’t know if they had to use the Jaws of Life. She didn’t think April would be permanently scarred—Dad had
said a few scratches. And no one had said anything about amputating Aunty Liz’s legs—they were broken.

They had been through all this before. Kim had pestered Robin with questions all week. When Robin pointed that out, Kim protested, “But you never really told me anything. Not any details anyway.”

“I told you everything I know,” said Robin firmly.

Her chest tightened. Not exactly
everything
. She hadn’t told Kim how hard she had begged Aunty Liz to come. Robin carried a steaming mug of hot chocolate with a marshmallow to Molly and then plunked down at the table beside Kim. “What’s that?”

Kim had pulled a thick book out of her backpack and was flipping through the pages. “
The Book of Lists
. I got it for Christmas. Listen to this. ‘Fifteen people buried two or three times...’ Here’s a better one: ‘Nine unusual mating habits.’”

The Yggyssey by Daniel Pinkwater
#Scandal by Sarah Ockler
A SEAL's Heart by Winter, Nikki
My Rock #5 (The Rock Star Romance Series - Book #5) by Taylor, Alycia
Second Chance by Jane Green
Dark Soul Vol. 1 by Aleksandr Voinov
Led Astray by a Rake by Sara Bennett
My One and Only by Kristan Higgins
Vow of Chastity by Veronica Black
Hearts' Desires by Anke Napp