Read Why Government Fails So Often: And How It Can Do Better Online

Why Government Fails So Often: And How It Can Do Better

BOOK: Why Government Fails So Often: And How It Can Do Better
>>DOWNLOAD HERE >>READ ONLINE NOW
ads 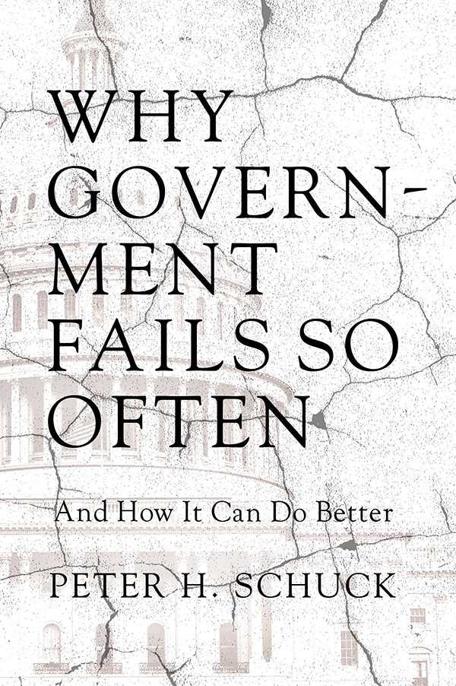 And How It Can Do Better

This book is dedicated to our federal officials—civil servants and political appointees alike—who struggle against great odds to make our government work.

CHAPTER
2: Success, Failure, and In Between 39

Acknowledgments
W
riting a book of this kind is inevitably a solitary undertaking. Nevertheless, I am indebted to a number of individuals and institutions. Some read portions of earlier versions of the manuscript—in a few cases, all of it—and provided me with useful comments, criticisms, and bibliographical suggestions. These include Henry Aaron, Lynn Chu, Martha Derthick, John DiIulio, Dick Fallon, Amihai Glazer, Judy Gueron, Judd Kahn, Mark Kleiman, Walter Lafeber, Bob LaLonde, Bob Litan, Ken Manaster, Jerry Mashaw, David Mayhew, Shep Melnick, Geoff Miller, Pietro Nivola, Rick Pildes, Ricky Revesz, Nancy Rosenblum, Steve Sugarman, and Cliff Winston. Many other people, not named here, kindly answered specific questions. Shortly before his death, James Q. Wilson commented on my original outline, assuring me that such a book was needed. Three formidable groups of scholars—my Yale Law School colleagues and those at the Brookings Institution and the Manhattan Institute—kindly convened workshops to discuss the work in progress. Two institutions supported my work, each in its own ways: Yale Law School, where I am a longtime faculty member; and the New York University School of Law, which has generously given me an office, library and administrative support, and intellectual fellowship during the past fifteen years when I have lived in New York City. At various points I benefited from the able research assistance of Yale Law School students Mathew Andrews, Josh Handell, Charlie Hauch, Steven Kochevar, Ted Wojcik, and Jacob Goldberg who prepared the index. Finally, I have enjoyed the enthusiastic support of Princeton University Press, especially its fine director Peter Dougherty, his associate Beth Clevenger, production editor Mark Bellis, and copy editor Brian Bendlin.

O
ur political system has long been admired and wondered at by Americans and outsiders who marvel at its ability to govern for 225 years a remarkably dynamic, diverse society. Yet most Americans today believe that our government is failing to deliver what it promises, and they have lost confidence in its effectiveness. Herein lies a deep and dangerous dilemma, one that this book seeks to explain and perhaps to help solve.

Consider some of our government’s past successes—many of commission, some of restraint. Since the Civil War, the U.S. political system has been extraordinarily stable and durable, experiencing no deep crisis of regime legitimacy and requiring only a dozen additional amendments to our eighteenth-century Constitution, most of them of only historical significance. Our polity and civil society have accepted and integrated a vast number of immigrants of diverse races, religions, languages, and cultural backgrounds, most with relatively low education levels, transforming them into patriotic Americans and loyal permanent residents. Our competitive, resilient economy leads the world in technological innovation and has given us the highest standard of living in the world. (Despite recent setbacks, it still vies for that distinction with oil-rich Norway and tiny tax haven Luxembourg.
1
) Having rescued our allies in two world wars, the United States has exerted hegemonic military, cultural, diplomatic, and economic power (for better and worse) for seven decades. It has extended civil rights for racial and religious minorities, women, gay people, and the disabled. It reduced poverty significantly between 1960 and 2010, with much of
that decline occurring since 1980.
2
Its civil society is the world’s most robust and creative, with a vibrant religious and civic culture that supports a bewildering variety of philanthropic, religious, and social service activities. Among liberal democracies, Americans are by far the most patriotic people; almost 90 percent completely or mostly agree with the statement “I am very patriotic”; most claim to engage in patriotic activities.
3
Our natural environment, highlighted in its national park system and vast tracts of unsettled territory, is stunning. The U.S. demographic structure and fertility rate are the envy of faster-aging Western democracies. A deep norm of tolerance leaves the United States as one of the few advanced democracies without a nativist or xenophobic political party. Its formidable military establishment poses no threat to civilian politics. Its response to 9/11 was largely effective in avoiding subsequent attacks on the homeland. It maintains a stable currency that helps support the global economy. Some of its domestic policies and programs are highly successful (see
chapter 11
).
*

This is the good news. The bad news is that Americans have a dismal opinion of the federal government’s performance, one that is only getting darker.
4
Significantly, this growing antipathy is not antigovernment generally (see
chapter 4
). Instead, it targets
only
the federal government; respect for state and local governments is both high and stable. Nor is this hostility toward the federal government in Washington a partisan matter. Instead, it is expressed by a majority of Democrats as well as Republicans.
5
And perhaps most revealing, this disaffection long preceded the current political gridlock in Congress that many pundits see (wrongly, as I shall show) as the root of the problem.

In both 1997 and 2010, a Princeton Survey Research Associates/Pew survey reported that only 2 percent of respondents believed that the federal government does an “excellent job” in running its programs; 74 percent of respondents said that it did only a “fair” or “poor job.”
6
In 2011, 79 percent said they were “frustrated” or “angry” with
the federal government. (In 2007, before the recession, that total was 74 percent.) Again, Obamacare’s initial website breakdown, unexpectedly low enrollment by the young and healthy, and the constant regulatory maneuvers necessitated by these factors have probably magnified this deep discontent.

In 2010, only 36 percent thought the government “often does a better job than it is given credit for.” Fully 83 percent thought that federal programs’ performance was “getting worse” or “staying the same.” In 2011, 64 percent thought that “big government” was the biggest threat to the country in the future; only 26 percent identified “big business” as the biggest future threat, even only five years after the economic meltdown.
7
In 2010, only 4 percent had “a lot of confidence” that when the federal government decides to solve a problem it will actually be solved. In July 2013, a
Wall Street Journal
/NBC News poll reported that 83 percent of Americans disapprove of Congress’s performance—the highest in the poll’s history.
8
And, perhaps most ominous, a Harvard Institute of Politics poll published in April 2013 found that among voters under thirty, traditionally the most optimistic and idealistic demographic group, trust in the president and in Congress is at low levels and declining.
9
Not surprisingly, both parties are finding it harder to induce attractive, ambitious candidates to run for the U.S. Senate.
10
Even the public’s approval rating of the Supreme Court, which it traditionally revered, has declined significantly since the 1980s to just 44 percent.
11

Consider the responses to a question that pollsters have asked for more than a half century: “How much of the time do you think you can trust the government in Washington to do what is right?” In 1958, 73 percent said “just about always” or “most of the time”; in 2011, only 10 percent did so.
12
In April 2013, only 28 percent of Americans had a favorable opinion of the federal government; even among Democrats, who controlled both the White House and the Senate, it fell to only 41 percent, down ten points from the previous year.
13
Indeed, even the Democrat leadership decries failures in many programs, while insisting that it can rectify them with more money, greater fairness, and smarter administration.
14
The public evidently disagrees. A
2011 Rasmussen poll found that a record-low 17 percent of voters felt “the federal government has the consent of the governed” and 38 percent (a plurality) wanted the federal government to become “inconsequential” in American life.
15
In 2013, the Brookings Institution found that even
56 percent of Democrats
believe the government is “mostly or completely broken.”
16
And this was
before
the government shutdown and failed Obamacare rollout on October 1, 2013, which of course aroused even greater public disgust! Even liberalism’s century-old flagship, the
New Republic
, now despairs.
17

In short, the public views the federal government as a chronically clumsy, ineffectual, bloated giant that cannot be counted upon to do the right thing, much less to do it well. It does not seem to matter much to them whether the government that fails them is liberal or conservative, or how earnestly our leaders promise to remedy these failures. Failure is also common in the private sector, of course. Most new firms go out of business within their first five years,
18
and the performance of leading private firms have often been abysmal and sometimes criminal
19
—for example, the “big four” accounting firms that audit brokerage safety and performance,
20
the top bond rating companies,
21
stock exchanges,
22
and the major financial institutions.
23
The leading heart organizations’ new set of cholesterol guidelines was discredited within days. But whereas consumers dissatisfied with private providers can usually take their business elsewhere (as Blackberry and other companies have discovered), discontented citizens are stuck with the government they have, until the next election.