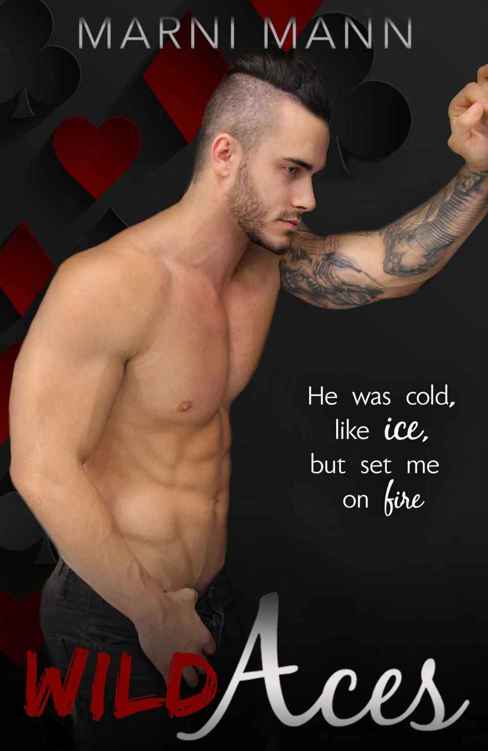 Copyright © 2016 by Marni Mann
All rights reserved.
Cover Model: Mike Chabot
Cover Designer: Mad Hat Covers,
www.madhatcovers.com
Editor: Steven Luna
Proofreader and Interior Designer: Jovana Shirley, Unforeseen Editing,
www.unforeseenediting.com
No part of this book may be reproduced or transmitted in any form or by any means, electronic or mechanical, including photocopying, recording, or by any information storage and retrieval system without the written permission of the author, except for the use of brief quotations in a book review.
This book is a work of fiction. Names, characters, places, and incidents either are products of the author’s imagination or are used fictitiously. Any resemblance to actual persons, living or dead, events, or locales is entirely coincidental.
ISBN-13: 978-1523690343

Blood. I tasted it. I didn’t know if it was coming from a tooth getting knocked loose or if it was dripping from my sinuses. But my nose was definitely banged up pretty badly. My lip was busted open, and my mouth was aching from the inside.

“You little fucking pig,” I heard.

I wanted to cover my ears, so I wouldn’t have to listen to him anymore, but I couldn’t. I had to rub all the spots he’d kicked and try to make them feel better. This time, the spot was the back of my thigh. Man, it’d hurt so much when he stomped on it. My whole leg tightened, pain shooting all the way to my ankle. I pushed my shoulders back, trying to stretch out my body, and that was when he kicked me in the butt, right between my cheeks so that it felt like he was splitting my ass open.

“What did I tell you about Gracie?” he shouted. “She’s off-limits to your fingers and to your goddamn fucking eyes.”

Another kick—this time, in my side.

I screamed. I couldn’t bear the pain. The noise told me he’d broken my rib, and it wasn’t the first time. I knew what it would feel like, how hard it would be to breathe.

He kicked me again, a few inches lower. Same feeling, same
craaaack
, same scream shooting out of my mouth. Small silvery stars flashed in front of my eyes as sweat covered my skin.

I knew what was coming next. It always happened when the pain was that bad.

I clawed my way forward just to get away from him. He followed me, stomping on my calf, as I threw up. All that came out was blood. My breakfast was long gone, and he hadn’t fed me dinner. He’d said there wasn’t enough food to go around.

But he’d eaten. They all had.

The blood coming out of my mouth didn’t make him stop. It seemed to make him kick harder—the back of my other leg, this time.

“Watching your foster sister get ready in the bathroom? What kind of fucking pig are you?”

But I hadn’t been watching her. Gracie wasn’t even home tonight. I had been down in the basement where I slept on a mattress on the dirt floor, looking at one of the magazines I’d stolen from under his bed. There was no use telling him that, or any of them, the ones who’d blamed me for things in the past. I was always being accused of something I hadn’t done. But you wouldn’t know I was innocent by looking at my body. And when I remembered how they’d treated me, I almost didn’t know it myself.

“Gracie ain’t like one of those girls in those magazines you like to beat off to,” he said. “She’s going to graduate this year and make something of herself and put me up in a real nice house. She doesn’t need little boys like you gawking at her, rubbing your little dicks, hoping she’ll come over and straddle you.”

The dirt on the basement floor covered my lips and the inside of my mouth. When I spit it out, it was covered in blood. More blood.

The sole of his boot slammed against my shoulder, and he dragged it down the top of my arm. It burned, like I’d slid along some sharp rocks. “I can’t let your little dick get near Gracie again.”

Again? I’d only seen Gracie twice. Both times, she had been sitting at the table with her parents and her little sister, eating dinner. Both times, I had been told there wasn’t enough food for me, and I’d been sent back down to the basement.

He was screaming at me. I had no choice but to hear. And because I’d heard this all before, from men just as mean and cruel as him, I knew what was coming next.

He was going to kick me out.

Out of another house.

I slowly rolled over in the dirt. Everything ached; everything stung. Almost everything I was wearing had blood splatter or stains on it. This was going to be the last time he saw me, so I couldn’t leave here all hunched over and yelling about how much he’d hurt me. That would mean he’d won, and I didn’t want him to think that. But, man, I was full of pain when I stood up. My cracked ribs made it almost impossible for me to straighten my back.

There were only a few feet between him and the stairs. I just wanted to get out of there. Fighting back or mouthing off might only make things worse for me.

“Aren’t you gonna answer me, boy?”

I kept my eyes on the ground and shrugged. Even that hurt.

When he took a step closer, I sucked in the deepest breath I could take, preparing myself for what part of my body he would break next. I didn’t flinch, didn’t cover myself or cower. I stood up straight, and I waited.

“That’s right; keep your fucking eyes to the ground. You don’t deserve to look at me.”

He was standing over me now. I could feel his hatred and evil. I could smell his nasty odor—cigarettes and sweat and something fishy.

“You don’t even deserve my fist again.”

He cleared his throat, like something was stuck in it, and coughed whatever it was into his mouth. I could hear it swishing around his tongue. And then he smiled…just before he spit it on me. A thick glob hit my eye and dripped down my nose and over my lips.

“Get the fuck out of my house.”

I hobbled as fast as I could up the stairs and through the front door. The puddles on the sidewalk soaked through the holes in my sneakers and made my socks wet. My jeans hung too low on my waist, so I tripped over the bottoms. My knees bent, and my hands shot out to catch me. I screamed from the pain in my ribs as I fell. I cradled my arms around them, picked myself back up, and kept on going.

I cut through the park, knowing a payphone was just on the other side. I saw it once I got past the slide, all silver and shiny under the streetlight. When I reached it, I hugged it and tried to catch my breath. The back of my throat was burning. When I spit, there was more blood—not as much as when I had thrown up, but it was there. My skin stung, like I’d poured alcohol on the scrapes and cuts.

I reached into my pocket for a quarter. It was the only money I had.

I hoped Adrianna would answer.

Oh, man, it was such a relief to hear her voice.

“Oh God, Trapper. Are you at the house now, or are you somewhere safe?”

I looked around. There were some guys not too far away, standing in a circle and speaking Spanish. Two girls were on the other side of the street, waving at the cars driving by.

“Will you be okay until morning?”

“Then how about I meet you at our usual place?”

“I’ll bring you to the group home until I can find you another place to live.”

I knew it was her job to bring me in, but sometimes, I wished I could just live out here. It would be better than most of the places I’d been. “Okay. I’ll see you in the morning.”

I hung up and walked until I found a bench. It was in front of a bus stop, and a lady was sitting on one end of it. I put up the hood of my sweatshirt when I caught her looking at me. She’d seen enough. I didn’t want my bloody, battered face to scare her. I plopped down on the other end, leaning forward to take the pressure off my ribs.

I tilted my head to look at her. “I’ve had worse.” That was the truth. This had been a light one. I’d been beaten much harder.

“But you’re just a kid. Kids shouldn’t have rough nights.”

She reached into her bag and took out a wad of cash, the roll half as thick as my hand. It was the most money I’d ever seen.

Just Between Us by Cathy Kelly
Theft by BK Loren
Anything You Can Do by Berneathy, Sally
The Yeoman: Crying Albion Series - Book 1 by Tyler Danann
Beast: Part Two by Ella James
The Burying Ground by Janet Kellough
Red Flags by Tammy Kaehler
(2012) Colder Than Death by DB Gilles
Stray Cat Strut by Shelley Munro
The Magician's Elephant by Kate DiCamillo