Read Wild at Heart (Walk on the Wild Side #1) Online

Wild at Heart (Walk on the Wild Side #1) 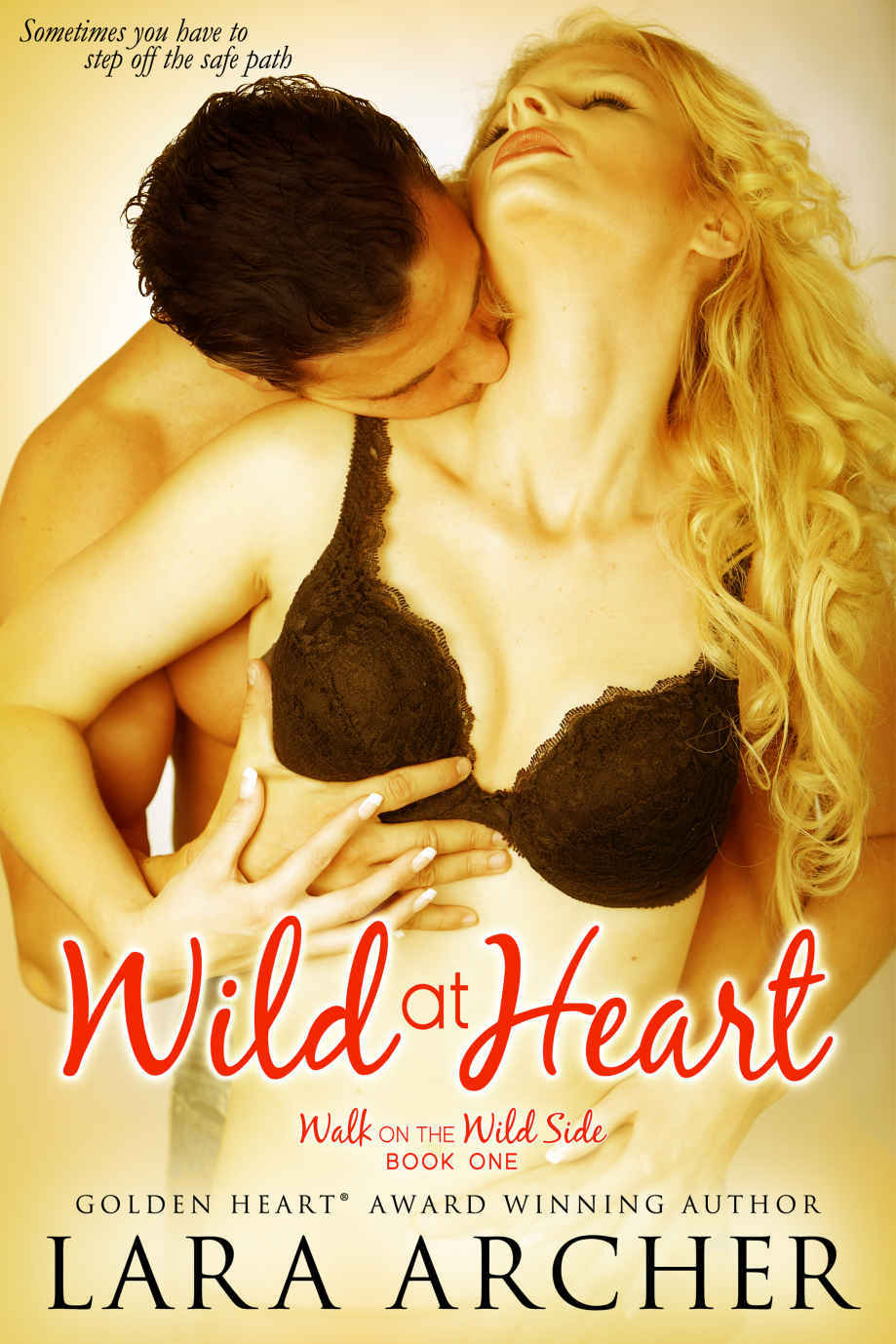 All rights reserved. No part of this book may be reproduced, distributed, or transmitted in any form or by any electronic or mechanical means, including information storage and retrieval systems without the prior written permission of the publisher, except in the case of brief quotations embodied in critical reviews and certain other noncommercial uses permitted by copyright law. For permission requests, write to the author at [email protected]

This book is a work of fiction. The characters, events, and places portrayed in this book are products of the author’s imagination and are either fictitious or are used fictitiously. Any similarity to real persons, living or dead, is purely coincidental and not intended by the author.

For more information on the author and her works, please visit
http://laraarcher.com/

Nick Turner found himself in a very familiar position: hiking uphill with heavy camera equipment strapped to his shoulders and earth crunching under his boots. And, of course, with his eyes glued to Amber Wakeling’s long, strong, suntanned legs eating up the trail ahead of him.

It was a sight Nick always enjoyed: the strides that showed Amber’s confident energy and zest for life, not to mention the way those legs of hers shot straight up to the swaying, gorgeous, heart-shaped curve of her ass.

He had a whole arsenal of fantasies to torture himself with as they sought whatever destination Amber had in mind for filming on any particular day—New Mexico desert or New York City dockyard, he could adapt for anything.

Today was especially potent, out here on a Colorado mountain, in the pine forest, alone. A perfect early summer day. Not a soul for miles.

No harm in imagination, right?

With a few long strides he could catch her, run his palms up those taut thighs, seize her around the waist and press his mouth into that sweet little space behind her ear. He’d have her breasts in his hands then, and he’d yank her t-shirt up and off. And then he could spin her around and back her up against a tree-trunk, or maybe just coax her to bend forward over a sun-warmed boulder.

He liked the idea of wrapping both her hands in one of his, drawing her arms taut over her head. His other hand would pop the button on her hiking shorts, drag down the zipper, slide the waistband past her hips. He’d yank up her shirt next, have her naked in seconds.

Maybe he’d take his time then, exploring her everywhere with his hands and mouth until she moaned and screamed his name. Or maybe he’d rip open his own button-fly, shove her thighs apart and thrust right into her until he was the one screaming. He’d slide his fingers to the joining of her legs, stroking the way he wanted to, the way he dreamed of, and they could scream together.

Hell
. There wasn’t a camera bag big enough to hide the bulge that had started straining the front of his shorts.

But he’d just have to live with it. No harm in dreaming, but there was no way in hell he was actually going to do it.

Amber was his
friend,
damn it. Not to mention his work partner, in the best creative relationship of his life. Four indie films in four years, with serious Oscar buzz for the last two. For the first time in his life, he felt like the artist he was meant to be. If he messed that up, he might as well go back to plastic L.A. and waste his life shooting car chases.

He was
not
putting this relationship at risk.

Now Amber glanced back over her shoulder with a grin. “It’s not much more than half a mile from here,” she said, her brilliant blue eyes sparkling. “You gonna make it, cowboy?”

He grinned back. That kind of teasing had become a tradition, too, every time they scouted a challenging location. “Race you to the top!”

And then it was a burst of speed, a tangle of branches and leaves slapping at their bodies, their hips jostling one another as they fought for the lead along whatever narrow path they happened to be following. There were no rules. Her elbows jabbed playfully at his belly, his hands clutched at her ribcage to slow her down. A brief, delicious excuse to touch her.

They were both panting and laughing as they shot out from the woods into a wide, green meadow. It was like leaping into Eden. The sky was suddenly enormous after the canopy of the pines.

“Look at this place! Look! It’s perfect, Nick!” Amber cried, stretching out her arms and spinning as she looked up at the clouds.

He eased the heaviest of the camera bags off his shoulders and looked around. God, yes—it
was
perfect. Amber had such an instinct for these things. Once the actors arrived, they’d shoot the perfect love scene here: starting with a lush panoramic shot, sweeping around all this greenery, the mountains in the background, still capped with the last of the winter snow. The flowers were so vivid, people in the theaters would swear they could smell them.

“Can you imagine,” said Amber, her tanned arms still reaching for the sky, her cheeks flushed with excitement. “Ruby Torres and Jay Hultensaalt
here
, starring in
our
movie? Just think of the sheer gorgeousness of
that
!” Her golden hair swept around her like sunshine, and the stretch of her arms lifted her breasts in a way that made Nick’s throat go dry.

“It’s already sheer gorgeousness,” Nick said, before he could stop himself. He hastily shifted his gaze off to the horizon. “The setting, I mean.”

Laughing, Amber reached down to pick a stalk of purple lupine, which she tucked behind her ear. She looked dazzling and adorable, a hippie princess. The dusting of freckles across her nose and the crinkles at the corners of her blue eyes—payment for spending so much of her life outside in the sun—only made her more beautiful. She couldn’t have been more tempting if she was trying to seduce him.

Which of course she wasn’t.

She was beaming with excitement—but about the movie she was going to shoot, not about him. “The cover girl for People’s 50 Most Beautiful People issue wants another Oscar nod,” she said, “and, cowboy, we’re gonna get it for her! We’re going to get her the damned Oscar!”

Nick smiled back at her. “She’s sure as hell not working with us for the money.”

“If she wants money, let her make another rom com with Ryan Reynolds. We’re offering a film worth making. Intelligence, raw emotion, and your eye behind the camera.”

“And the best script you’ve written yet, kiddo.” Calling her “kiddo” always seemed much safer than what he wanted to call her—
baby
, or something hopelessly sappy like
sweetheart
, or just plain
beautiful
.

Kiddo
it would have to be. Amber was a very-nearly-married woman, seemingly happy with that wuss lawyer-boy fiancé of hers and their mostly-long-distance relationship, which had lasted since Amber, Nick, and Louis all graduated Oberlin together.

And Nick—well, he was definitely not marriage material himself. Women threw themselves at him, he caught them, made them very happy for a while, then waved them on their way. That was all he was good for. While Amber deserved a home, a real home, and a family and security.

No—he wasn’t ever going to do what he wanted to do with her.

But she wasn’t making it easy for him today.

Amber strode over, her lush hips swaying, and a mischievous gleam in her eye. “Best part is, the one filming permit covers the whole National Park, and it’s free!”

“Perfect choice, kiddo,” said Nick, trying to keep his mind off the swaying hips and the gleaming eyes. What on earth kind of mood was she in today? Amber was often playful, tending towards the exuberant, and she had a complicated sense of humor, but she usually didn’t
try
to provoke him. Did she have the slightest clue how much he wanted her?

You’re a professional
, he reminded himself.
You’re twenty-eight years old, not a horndog teenager anymore
. He made himself think serious thoughts about lighting apertures and boom microphones and the chances of catching a hawk or eagle in flight in that opening panoramic shot. “How’d you even learn about this place?” he asked.

She actually batted her eyelids at him, and despite his best efforts at professionalism, Nick’s internal temperature shot up several degrees. “I have my ways,” said Amber, swaying closer still. “Us indie girls are clever about getting what we need.”

Nick took a step back, subtly adjusting the fit of his shorts to ease the increasingly painful throbbing of his cock, which seemed determined to pop open his button-fly. Thank goodness he always wore his shirts untucked and still had one camera bag hanging in front of him—though he found himself wishing they’d brought a couple extra crew members up here to help him keep his distance. Preferably crew members armed with animal-tranquilizer guns.