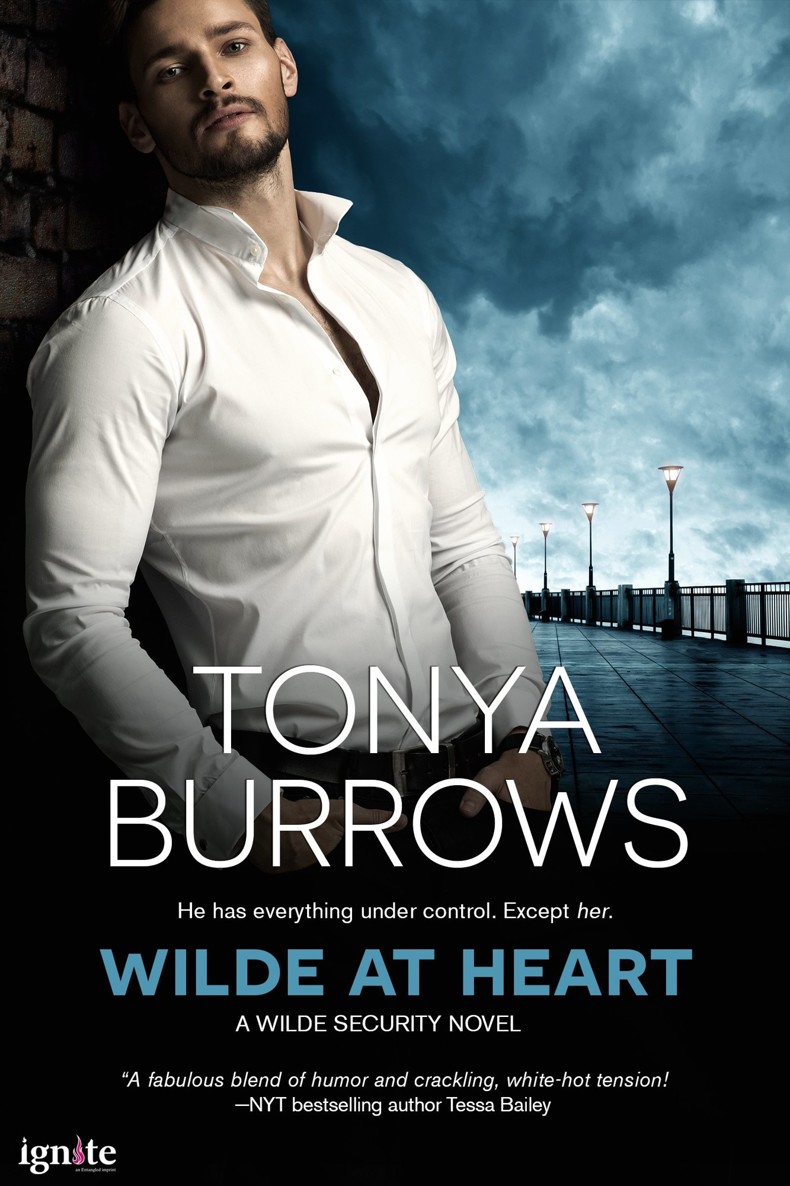 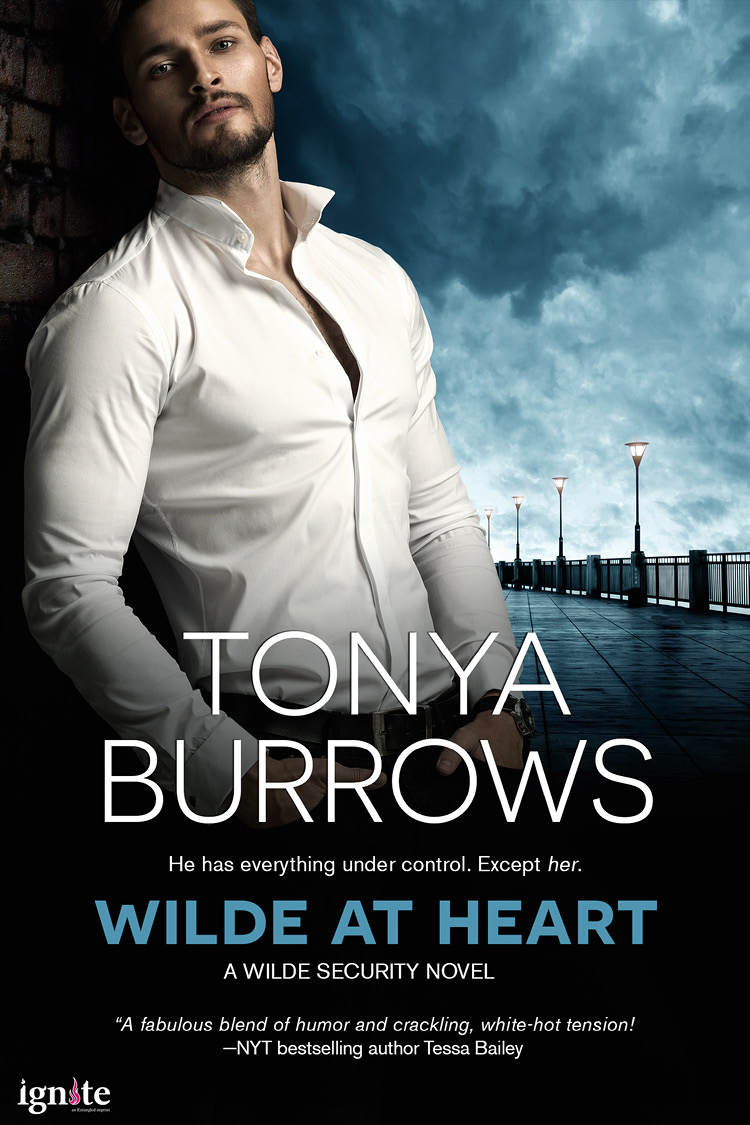 He has everything under control. Except
her
.

Reece Wilde put everything in his life on the backburner to protect his brothers and their struggling company, Wilde Security. With a major contract on the line, Reece can’t afford any mistakes…like getting caught in a red-hot, X-rated moment with wild child Shelby Bremer, who’s more trouble than he can handle. Now he’s being blackmailed.

Shelby’s mile-long impulsive streak gets her in more trouble than she’d like to admit. Between her sister’s wedding, her coffee shop set on fire, and getting down and dirty with the groom’s brother, things are definitely coming off the rails. With both their careers and their safety on the line, Reece is determined to keep them both safe…even if it means a Vegas-style shotgun wedding.

But gambling on a wild card—and a wild soul—is risky…and sometimes, it can get a guy killed.

Copyright © 2015 by Tonya Burrows. All rights reserved, including the right to reproduce, distribute, or transmit in any form or by any means. For information regarding subsidiary rights, please contact the Publisher.

Ignite is an imprint of Entangled Publishing, LLC.

Scratch that. He abso-fucking-lutely should not be here.

Even as the thought tracked through Reece Wilde’s head, he pushed open The Bean Gallery’s front door. 9:00 p.m. on New Year’s Eve, and the coffeehouse was dead silent. Its tables, each depicting a different famous painting, sat empty of the usual eclectic crowd of patrons. No college students cramming for exams. No hipsters philosophizing over lattes. And certainly no businessmen stopping for a convenient caffeine fix before their next meeting.

That was how he’d discovered this place. Just a quick stop between back-to-back morning meetings to re-caffeinate before back-to-back afternoon meetings.

And this was where he first saw Shelby Bremer, the woman who held a starring role in his every sexual fantasy for the past several months. The woman who was so fucking far off-limits, she might as well have the words “access denied” tattooed on her forehead.

When they first met, she’d been a patron here, eating breakfast over in the corner at the table painted like Van Gogh’s
Starry Night
. Reece glanced over at that table now. Someone had stacked the chairs on top of it in preparation for closing time, but he could still see her sitting there so clearly, the image of her short skirt and combat boots seared into his mind like a brand. Normally, he wouldn’t have given a woman with pink-streaked blond hair, tattoo sleeves, and an eyebrow ring a second glance, but there was something about her that fascinated him. As he’d waited in line for his coffee, he hadn’t been able to take his eyes off her. When she noticed him staring and blew him a kiss with her middle finger, a switch had flipped inside his head, and his viciously repressed sex drive roared to life. Everything in him demanded he take her, dominate her, bend her over that badly painted table and leave his handprint on her ass for that saucy gesture of defiance. The need had been so instant, so intense, it scared the ever-loving hell out of him, and he’d scrammed as soon as he had his coffee in hand.

But he’d come back. Day after day. She was always at the same table, and she’d started watching for him, a spark of interest and heat in her blue eyes. Although they had never said a word to each other, he’d all but given in to the inevitability of the two of them fucking sooner or later. And for the first time in a very long time, that idea didn’t make him want to run in the opposite direction.

Then he’d found out she was his brother’s fiancée’s sister.

Which was exactly why he shouldn’t be here.

Shelby worked at The Bean Gallery now, and she had the closing shift tonight.

Not that he was stalking her or anything like that. Just keeping tabs at the request of his brother. Eva—his soon-to-be sister-in-law—constantly worried her half sister’s impulsive nature would lead to Shelby hurting herself or burning down the house, and whatever Eva worried about worried Cam. So Cam had recruited his brothers to covertly keep an eye on Shelby.

And this visit was just Reece’s brotherly duty. Just like all the others.

His fantasies hadn’t ended just because Cam had asked him to keep tabs on Eva’s little sister. Hell, if anything, the request had only revved him up because now, not only was Shelby something exciting and exotic, but she was
forbidden
. The hacker in him loved the forbidden. He couldn’t look at the woman without wanting to strip her naked and taste every tattoo on her body, and Cam sure as hell wouldn’t consider
that
a brotherly duty.

Voices floated out of the back room, and Reece stopped short, caught by his own indecision halfway between the door and counter.

Yeah. Leaving would be a good plan, because he had no logical reason to be standing here other than the fact he couldn’t stay away. And if he didn’t leave now, he wasn’t going to until he got a taste of Shelby and put this goddamn uncharacteristic infatuation with her to rest.

One of the other baristas appeared first, a middle-aged woman with gray-streaked brown hair and brown skin baked to cracking. Reece vaguely recalled her name was something like Jane or Jenna, but he’d never exchanged more than a few pleasantries with her. The second to emerge was Stephanie, a sweet, bubbly college student who worked at the coffeehouse part time. She was ready for a New Year’s party in a glittery dress that covered about as much skin as a Band-Aid. Sky-high shoes dangled from her fingers. She was young, but she had class in spades. Give her five years and she’d grow into the kind of woman Reece should be interested in, the kind of woman his ultra-conservative business associates would approve of. Instead, all of his focus zeroed in on the woman trailing Stephanie through the door.

His pulse kicked up despite reminding himself she was related to Eva. For fuck’s sake, she was practically family. In a few short days, when Cam and Eva tied the knot, she
would
be.

And just like all the other times, the reminder did nothing to douse the firestorm of lust burning through him.

Her outfit tonight was relatively tame for her—black cropped jacket over a black tank top and a ruffled purple plaid skirt—and still, he wanted to see what was underneath. Hell, she could be dressed in a burlap bag and he’d want to see underneath. Her hair spilled over her shoulders in a shock of turquoise and purple, and he noticed a new piercing, a small turquoise gem glinting from her nose.

That shouldn’t be sexy.

Goddamn, but it was.

“Are you sure you don’t want to join us, Shel?” Stephanie was saying. “It’s going to be the party of the year!”

Drift (Drift Series) by Dean, Michael
The Rogue: Searching for the Real Sarah Palin by Joe McGinniss
Rex Stout_Tecumseh Fox 01 by Double for Death
Cowboys-Dont-Dance by Missy Lyons
Beautiful Kate by Newton Thornburg
Surrender to Me by James, Monica
Atlantia by Ally Condie
Too Close to the Falls by Catherine Gildiner
Microsoft Word - NaturalDisaster.doc by Shawn Clements
One Tempting Proposal by Christy Carlyle