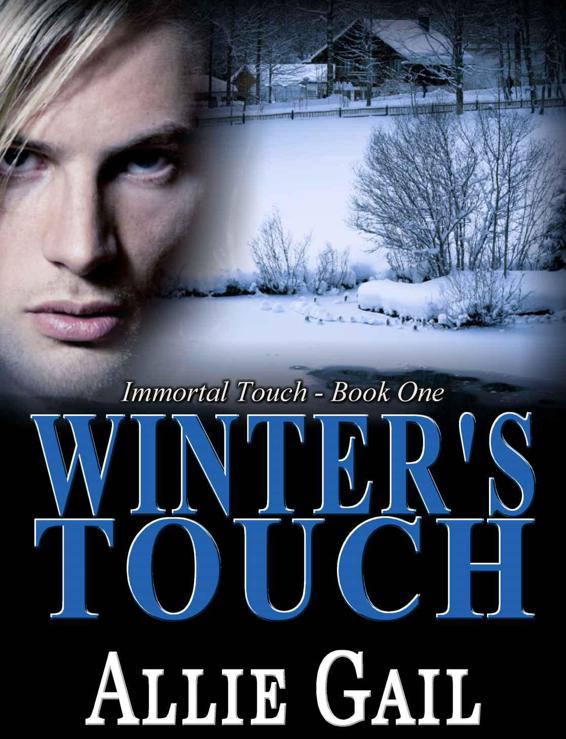 Book One of the Immortal Touch Series

All rights reserved. No part of this book may be reproduced or transmitted in any printed or electronic form without
express written permission from the author.

This book is a work of fiction. Though some of the cities and towns actually exist, they are used in a fictitious manner for purposes of this work. All characters are works of fiction and any characteristics similar to any person past, present or future are coincidental.

The vampire taps his fingers on the steering wheel in time to the beat of
All Around Me
as he trails haltingly behind his prey at a safe distance.

That’s got to be her. H
e’d recognize that fiery mane anywhere. Of course, he hasn’t seen her in - what has it been? - a decade or so, not since he left the small Nebraska suburb where she still resides.

Correction. Where she
formerly
resided.

U
nbeknownst as yet to her, she is about to disappear forever. To be snatched in the night like a maiden who has strayed too far from the path, by the proverbial wolf in sheep’s clothing out of some dark fairy tale. And how long before she recognizes him as the hungry wolf? As the source of her recurring nightmares? Ah, but there will be time enough for her to discover her misfortune. She will have nothing but time to reflect on her carelessness from this night forward.

Until she eventually
succumbs to the fatal effects of massive blood loss, that is.

The
ominous clouds suddenly decide to unload their burden of rain, and he smirks as he watches her pause on the sidewalk and lift her face to the sky as if to say,
why me?
She thinks she is having a run of bad luck now. She’s seen nothing yet. Her night is about to get a whole lot worse.

It
’s time. He catches up to her, pulls the Jeep Grand Cherokee alongside the curb. She turns her head to see who it is that’s offering her a ride, and in that moment there is no remaining doubt in his mind that it’s her. He lowers the passenger window and the rain-soaked wind brings him the tantalizing scent of her blood.

He leans
closer and smiles.

Eva
Spencer released her grip on the swing set’s monkey bars, dropping with a
plunk
to the hard ground below. Traipsing after the small white kitten, she followed his route into the next-door neighbor’s back yard even though she knew full well she wasn’t supposed to leave her own yard. It was beyond her why Rio would sometimes just take off like that. Hopefully it had nothing to do with the frilly doll’s dress she’d tried to stuff him into a few days ago. He’d been pretty mad about that. Maybe it was just that he caught sight of a mouse or something. If that was the case, she sure hoped he didn’t catch it. She didn’t want to sleep with a cat that had dead mouse on its breath. It was already enough that he shed all over her blankets and Mommy was threatening to make him sleep in the laundry room.

Other than a coiled water hose
, the neighbor’s yard was basically empty. The grass had been recently cut so it should have been a cinch to spot the snowy fur since there was no place to hide. But the rambunctious Persian kitten had completely vanished from sight. There was no sign of him anywhere. How had he managed to slip away from her so quickly?

The back door
to the house was wide open, with only an unlatched screen door between her and whatever lay inside. Maybe Rio had pushed his way in. Well, probably not, but she could hear faint music coming from somewhere inside and that aroused her unwavering curiosity. It was music unlike any she’d ever heard before. Maybe nobody would notice if she snuck inside to see where it was coming from. As quietly as possible, she opened the screen door and tiptoed into the house.

The foyer was
a carbon copy of the one in her home, with shiny hardwood flooring that led into the main living area. She followed the sound into that room and any resemblance to her own house ended then and there. The furniture in
this
living room was all black leather and there were weird-looking paintings on the walls. An ordinary stereo was the source of the monophonic melody that lured her in like the pied piper. Aside from this commonplace piece of technology, the surroundings were dark and mysterious, unlike the bright and cheerful décor in her own home. It was fascinating, though. And Eva’s five-year-old mind was perpetually allured by anything remotely unorthodox. She pretended she was Gretel, entering the witch’s gingerbread cottage for the first time. Too bad Nathaniel from down the street wasn’t here to play with her. He could be Hansel.

A rhythmic whacking sound came to her
from another room and she tracked the noise to a large kitchen furnished with modern stainless steel appliances. There, standing at the counter chopping carrots and humming along to the Gregorian chant, was Mr. Winter. She’d seen him plenty of times before from a distance. He was easily recognizable by the straight blond hair that stopped just short of reaching his shoulders. Most grown men she knew didn’t have hair that long. Her daddy said he was probably a fruit, whatever
that
meant, but Mommy just laughed and said,
he’s going to disappoint a lot of women if he is.
Adults were always saying stuff that didn’t make any sense.

The man
looked up from the cutting board and raised an eyebrow. “Well. Hello there.” She thought he sounded sort of like those men on that boring PBS show her mother watched sometimes when Sesame Street wasn’t on. They were usually smoking pipes and saying goofy things like,
I say, old chap!

“Hello.”
Eva climbed up on a kitchen chair and made herself comfortable. “What are you doing?”

“
Cooking dinner. And just what, may I ask, is it that you’re doing?” He looked as if he wanted to smile but couldn’t really decide if he should.

“I was looking for my kitty. He ran off.
I don’t know why. I didn’t do anything to him. Do you have any pets?”

“Yeah, but he poops on the floor sometimes so Mommy didn’t want a dog. We got a cat instead. Rio doesn’t poop on the floor. He’s smart.” She didn’t tell him the whole truth - that Mary Ellen’s dog was humongous and she didn’t like him much. When he barked it scared her.

“What are you making?” Eva swung her legs back and forth. Her feet didn’t quite reach the floor.

“
Vegetable lo mein. Are you hungry?”

“
Kind of, but we’re having meatloaf again. I wish it was hamburgers and french fries. We’ll prob’ly have green beans and I
hate
those. Do you like green beans?”

“I like french fries with ketchup best. What’s your favorite food?”

This time the man did smile. He didn’t answer her question. “What’s your name, sweetheart?”

“Evangeline Spencer. But everyone calls me Eva. I call spell Eva, but not Evangeline. Mommy only calls me that when she’s mad anyway. I know who you are. You’re Mr. Winter. I heard Mommy and Daddy talking about you.”

“Did you now? And what were they saying?”

“I don’t remember. Something about real escapes.”

He
seemed puzzled. “Real...oh, you must mean real estate.”

“
Uh-huh. They were trying to guess how much you paid for your house. Was it a lot? Was it more than a hundred dollars?”

“I get a dollar every time I clean my room, if I do it right. Not if I push my toys under the bed.
They always check. I have to put everything right where it’s supposed to go.” This was another thing about adults that she didn’t get. You couldn’t
see
her toys if they were underneath the bed, so who cared if they were there instead of in her toy box? What difference did it make as long as they were out of sight?

“You
can come see my dolls sometime. I have one from Sweden and one from...um, that place where people wear wood shoes and grow tulips, you know? And I have a bride doll with red hair like mine. And lots of Barbies. Except one of them is messed up ‘cause I cut her hair and got it too short so she looks funny. She’s kinda baldheaded now. I wasn’t supposed to use the scissors. I hid her in the closet so Mommy wouldn’t find out. Don’t tell her, okay?”

“It’ll be our little secret.”

“Now you have to tell
me
a secret.”

“I told you one, so you have to tell me one.” She cocked her head and looked up at him expectantly.

“Oh, I see.”
He placed a red pepper on the cutting board and began slicing it. “All right then. Would you like a big secret, or just a little one?”

“A big one!”
Eva beamed exuberantly, delighted that he was playing along.

“Yes, I thought you might. Well,
my young friend, I’ll share a big secret with you.” His eyes watched hers. “Sometimes I kill people.”

“I kill people. I drink their blood,
you see, and then I kill them.” He moved fluidly toward her, the stainless steel knife still in his hand. Standing directly in front of her, he tapped the sharp edge of the blade gently against his palm.

Her
green eyes widened. This was the most exciting thing she’d heard since Frankie Elliott told the class about his summer trip to Africa. “You do? Honest?”

“How come you eat people? You don’t like hamburgers?”

He laughed at that. “Aren’t you afraid?”

“No
way. You’re my friend. Do you put ketchup on people when you eat them? Do you put them in the oven and cook them?” She was enthralled. Up until now the weirdest thing she’d ever seen anyone eat was an earthworm. Even then, the kid had thrown it up afterwards. So that really didn’t even count.

“You
really are an odd little thing.” The blond head shook back and forth. “I don’t
eat
people, Eva. I consume only their blood.”

“
Oh. Are you a vampire?” She’d seen those on the late show when she was supposed to be in bed. They had fangs and glowing red eyes. Mr. Winter didn’t have either.

“
As a matter of fact, I am.” He stared at her as if debating something in his mind, all the while still playing with the knife, twisting the point absently in his hand.

“Can I watch you bite somebody?” She wondered if it would be like in the movies. Would he wear a black cape and bite people on the neck? How did he do it without long teeth?
Maybe he was just teasing her. He didn’t
look
anything like Dracula.

Stepping by Nancy Thayer
Rapunzel's Salvation by Mia Petrova
The Pace by Shelena Shorts
A Hat Full Of Sky by Terry Pratchett
Pitching for Her Love by Tori Blake
Metropole by Karinthy, Ferenc
Call for the Saint by Leslie Charteris
The Death of Me by Yolanda Olson
Golden States by Michael Cunningham
Darcy and Elizabeth What If? Collection 1 by Jennifer Lang