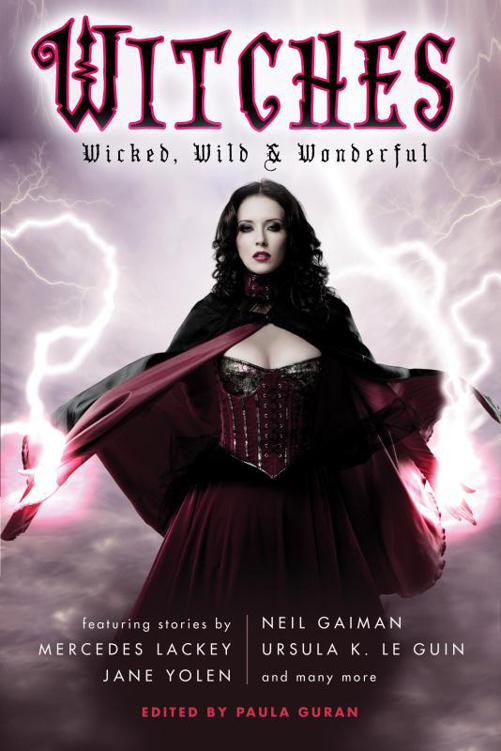 For my new “familiar”: Nala

“Hasn’t this cat got anything better to do? Couldn’t you give him something to read?”

Screenplay by Daniel Taradash, Based on the Play by John Van Druten

The Cold Blacksmith
by Elizabeth Bear

Mirage and Magia
by Tanith Lee

The World Is Cruel, My Daughter
by Cory Skerry

The Witch’s Headstone
by Neil Gaiman

The Way Wind
by Andre Norton

The Only Way to Fly
by Nancy Holder

The Robbery
by Cynthia Ward

Marlboros and Magic
by Linda Robertson

Magic Carpets
by Leslie What

The Ground Whereon She Stands
by Leah Bobet

The Goosle
by Margo Lanagan

In any quest for magic, in any search for sorcery, witchery, legerdemain, first check the human spirit.
—Rod Serling, “Dust,”
The Twilight Zone

One of the most common characters to be found in fantasy, there are many fictional variations of the witch icon and similar diversity in the themes and meanings represented. The versatility and richness of the image continues to grow, as does the popularity of modern interpretations.

The idea of witchcraft can be found in nearly every culture and its folklore. This anthology explores only a few permutations of the fictional witch and primarily in the context of Western tradition.

Our concept of the witch is not only extremely broad, it is also contradictory.

There is the stereotypical cackling “old hag” riding a broomstick and stirring her cauldron. She often lives alone with a black cat as her familiar. The incarnation of evil, she can hex you or cast a spell that makes your cow go dry—or worse. Sometimes she doesn’t even exhibit magical powers; her sorcery is measured by how she cruelly preys on the innocent.

But we also know the “good witch”: wise-woman and healer, the elder who possesses helpful knowledge—sometimes arcane and occult, sometimes merely practical—and provides guidance and protection. The good witch helps heroes, saves the day with her own heroism, or assists rightful rulers to regain thrones and rule well. She is often an important figure in the life of a young person.

The witch has her place in history-based or pseudo-Medieval epics, alternate universes, pastoral settings, urban bustle, suburban neighborhoods, and just about any era or locale imaginable.

Warts and beaked noses under pointy hats personify one archetype, but witches can also be beautiful: seductive and dangerous; an attractive or plain wise-women/healer; exotic, sexy, and literally bewitching; spunky and cute; chic business witch; urban punk; the girl next door or the demon of your nightmares—the witch has infinite variety.

Humble and helpful or powerful and manipulative; peasant, queen, or suburbanite—a witch can be the ultimate loner, need a coven, have a family, be part of an international organization, or anything in between. She can be aged or ageless. Lately teen-aged witches, full of juvenile conflict as well as the challenges of dealing with their powers and/or destiny, have started to inhabit a subgenre of their own.

Witches can be normal humans who agree to a pact with the Devil in order to practice black magic and subvert souls. Or they can simply be mortals who learn the craft of magic, no Satanic deal needed. Witches may be thoroughly human practitioners of a particular religion. There are also hereditary witches born with special powers. In some fantasy witches are a separate species.

Whether born with supernatural abilities or having acquired them, witches may keep their powers hidden from the misunderstandings and prejudices of the mundane world. Or they may be “out of the broom closet” and openly practice witchcraft. Some of the latter live in worlds where witchcraft is part of the natural order of things

A great deal of modern fictional witchcraft has been influenced by various neopagan and Wiccan beliefs—including communion with a tri-part goddess. “Domestic” witches—women with magical powers, but who marry or love humans, is another predominately twentieth century invention.

Unlike other fantastic beings who capture our imagination, witches are not fundamentally supernatural creatures. Vampires? They are no longer human and cannot walk among us during daylight hours (at least not without special provision). Werewolves possess an animal nature usually connected with the full moon. Fairies, although they can look like us, have never been human. Ghosts were once human but, having been transformed, no longer belong to the world of the living. Witches, though, are either humans who practice magic or are born with special abilities, but are otherwise indistinguishable from the rest of us. Witches can live among us without ever revealing their extraordinary powers.

As Stefan Dziemianowicz wrote in 1995: “For all their remarkable powers, [witches] are accessible, and sometimes vulnerable. It is this dual nature that makes witches so fascinating—and frightening.”

But as accessible and indistinguishable as they may be—witches are still “other.” Historically, those persecuted as witches, Dziemianowicz reminds us, “shared one common stigma: the perception they differed in subtle and insidious ways . . . their greatest transgression was their simple nonconformity.” Being an outsider is a risky business.

Nowadays, witches can still be wicked, but they often are used to personify very human evil. After all, we don’t really fear the Devil or uncanny monsters so much as we fear our fellow humans: our own capacity for evil is all too apparent. Fairy tales have been sanitized and given happy endings, but the core truths remain real. Parents abandon their children (and worse), people kill for no reason, power is often misused in horrendous ways, there are cruel and painful dangers in the deep, dark forests of our lives. In modern society, it never hurts to be the fairest or the most skilled or the cleverest. It also helps to know the right people, be special in some way, or find luck in unlikely places. Most of us kiss a few frogs along the way. We may meet up with helpful witches or encounter witches who can destroy us.

In fantasy these days, more often than not, witches are the “good guys.” Freed from centuries of patriarchy, witches—mostly female—have become a wonderful symbol of the empowered woman. The troubled real world we live in seems to need the power of magic to solve its problems—rationality just isn’t enough to kick twenty-first century evil’s ass.

And perhaps we now recognize the “other” in ourselves—our own wild differences, our personal uniqueness—more readily and are willing to learn from it rather than fear it. As with any fantasy icon, through witches, readers can recognize their connection to the rest of humanity as well as discover truths about themselves.

I hope you find—through the marvelous imaginations of these writers and their amazing stories—some magic of your own.

Delia Sherman’s delightfully domestic modern witchcraft tale takes its title from Walpurgis Night, a spring festival celebrated on April 30 or May 1 in many Northern and Central European countries. The holiday’s name comes from Saint Walpurga, an eighth century English missionary to the Germanic tribes. Walpurga was canonized on May 1 around 870. The first of May (or thereabouts) had a long pagan tradition as a time for spring fertility festivals marking the end of the winter in the Northern hemisphere. Conveniently, Walpurga became a patron saint of pregnant women, good crops, and a protector of peasants, so attaching her name helped Christianize the heathen spring fling. The eve of May Day came to be known as Walpurga’s Night (
Walpurgisnacht
in German and Dutch). The holiday was (and is) seen in some regions as a night when the barriers between the mundane and the supernatural could be easily breached—like All Hallow’s Eve (which comes exactly six months later). Evil spirits are driven away with loud noises, bonfires, singing, drinking, dancing, and general revelry. In Germany it was particularly associated as a night when witches gathered. Walpurgis Night also coincides with Beltane, a Gaelic festival similarly celebrated in Scotland and Ireland.

The big thing about the new people moving into the old Pratt place at Number 400 was that they got away with it at all. Our neighborhood is big on historical integrity. The newest house on the block was built in 1910, and you can’t even change the paint-scheme on your house without recourse to preservation committee studies and zoning board hearings.

The old Pratt place had generated a tedious number of such hearings over the years—I’d even been to some of the more recent ones. Old Mrs. Pratt had let it go pretty much to seed, and when she passed away, there was trouble about clearing the title so it could be sold, and then it burned down.

Naturally a bunch of developers went after the land—a three-acre property in a professional neighborhood twenty minutes from downtown is something like a Holy Grail to developers. But their lawyers couldn’t get the title cleared either, and the end of it was that the old Pratt place never did get built on. By the time Geoff and I moved next door, the place was an empty lot. The neighborhood kids played Bad Guys and Good Guys there after school and the neighborhood cats preyed on its endless supply of mice and voles. I’m not talking eyesore, here; just a big shady plot of land overgrown with bamboo, rhododendrons, wildly rambling roses, and some nice old trees, most notably an immensely ancient copper beech big enough to dwarf any normal-sized house.