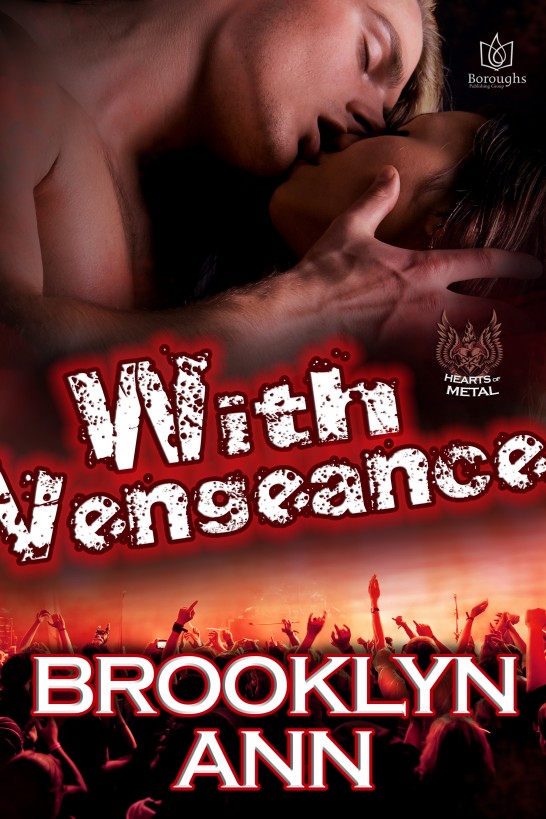 Twenty-three year old Katana James can shred
on the guitar. Not that anyone would know, as she’s spent most of
her time working on a popular news and gossip website for heavy
metal fans since her own band broke up. But her dreams are in reach
when she gets an audition to play with her favorite band, Bleeding
Vengeance. Kat won’t let her gender, her anxiety disorder, or even
the pranks of a malicious stalker stand in her way. The only thing
to threaten her focus? A growing fascination with the group’s
brilliant, mysterious bass player.

Klement Burke has always been the heart, soul
and brain of Bleeding Vengeance. He’s the kind of rock star who
stays in the shadows, a perfectionist more interested in satisfying
his brain than other parts of his body. Until he auditions Katana
James. At first it seemed a perfect idea, as he’s been aware of her
talent for some time. But meeting her in the flesh ignites thoughts
far from professional. Despite the conflict of work, the odds
against her falling for a geek like him, and a secret he’s been
hiding, his heart, body and soul now belong to Kat.

PRAISE FOR
KISSING
VICIOUS
,
THE FIRST BOOK IN THE HEARTS OF METAL SERIES

“I really enjoyed this book. It’s one of
those that hit all my happy buttons and allowed me to live out a
fantasy through the words of the author.”

“KISSING VICIOUS is a sensual, rockin’
romance with a hero to die for.”

“This is not your usual rocker romance. I
thank the author for creating strong characters and taking a
different course from usual. We really need more strong characters
like Kinley and Quinn in the romance genre.”

“Romance is deftly blended with humour,
fantasy is tinged with tragedy, and the whole thing rolls along,
nicely underpinned by a solid soundtrack of metal. It’s sexy, it’s
absorbing and whole-heartedly refreshing, and while at the heart of
it ‘Kissing Viciöus’ might be a romance novel, there is much more
to it than that. Consider me impressed and very pleasantly
surprised.”

“This book is amazing. Well-written with
great character development. If you love heavy metal or stories
about heavy metal bands, you are gonna love this one. Well worth
reading and one I highly recommend to all.”

OTHER PRAISE FOR BROOKLYN
ANN

“Following her promising debut (BITE ME, YOUR
GRACE), Ann hits her stride with solid writing, a tasty dash of
originality, and realistic relationships that zing with sexual
energy. A strong sense of fun mixed with a little feminism keeps
things lively and light, while the well-developed story keeps eyes
on the page.”

“Ann’s delightful vampire world is a fun
place to stop for a swift, lively evening’s enjoyment. Yes, it is a
dark world, but with Ann’s propensity for subtle humor and
eccentric characters, it’s an enchanting world as well. Four
Stars.”

“Brooklyn Ann’s series is a definitely must
read.”

—Romantic Reads and Such

a HEARTS OF METAL novel

PUBLISHER’S NOTE: This is a work of fiction.
Names, characters, places and incidents either are the product of
the author’s imagination or are used fictitiously. Any resemblance
to actual events, locales, business establishments or persons,
living or dead, is coincidental. Boroughs Publishing Group does not
have any control over and does not assume responsibility for author
or third-party websites, blogs or critiques or their content.

All rights reserved. Unless specifically
noted, no part of this publication may be reproduced, scanned,
stored in a retrieval system or transmitted in any form or by any
means, electronic, mechanical, photocopying, recording, or
otherwise, known or hereinafter invented, without the express
written permission of Boroughs Publishing Group. The scanning,
uploading and distribution of this book via the Internet or by any
other means without the permission of Boroughs Publishing Group is
illegal and punishable by law. Participation in the piracy of
copyrighted materials violates the author’s rights.

And to Kent Butler, my own personal rock
star. Thank you so much for helping me with research, being my
inspiration, and always being there for me.

Thank you so much to all the people who made
this book shine. First, to my agent, Nephele Tempest, and my
editor, Chris Keeslar.

Thank you to the musicians who helped me with
my research. Kent Butler for telling me what goes on in a recording
studio, Dean Chamberlain for letting me know what chord does what,
and Christian Brady for priceless info on album covers and other
developments.

A huge thanks to my friends and family for
your encouragement and support.

And thank you to my Street Team and
Newsletter peeps for keeping up the hype.

And thanks to Bad Movie club for bringing
levity and helping me keep my sanity.

The door of the recording studio resembled a
hungry mouth. Katana James set down her guitar case and wiped her
sweating palms on her jeans. Waves of anxiety engulfed her,
invoking a fine tremor in her hands. Her breath came in short,
quick pants as her lungs threatened to quit taking in air. Casting
quick glances around the parking lot and walkway, she grabbed her
Xanax out of her purse. Unscrewing the bottle, she shook out a tiny
oval orange pill. A half one or a whole? Her mouth twisted in an
indecisive frown. She was definitely anxious enough to merit a
whole pill, but she didn’t want to slow down and fuck up a
riff.

“Please, God, don’t let me blow this,” she
whispered.

She had been given the once-in-a-lifetime
chance to fulfill one of her deepest fantasies: to be the lead
guitarist in her favorite band, Bleeding Vengeance. Although the
chance was slim of them choosing a nobody, much less a girl, she
was beyond thrilled at the opportunity.

Even now she couldn’t believe she was here.
Every mile of the fifteen hour drive she’d had to fight back the
giddy flutter in her heart to concentrate on listening to the
sample tracks they’d sent her to learn her parts, all the while
praying her trusty old Subaru wouldn’t die on her. For the longest
time it seemed that her best friend Kinley had all the luck,
somehow snagging a job as a roadie for
her
favorite band,
Viciӧus, and miraculously joining them as stand-in guitarist when
their own went to rehab. But if Kat managed to impress Bleeding
Vengeance, she’d be more than a stand-in. Because Lefty Swanson was
dead.

He’d been a legend and her biggest
inspiration. Now she might be called on to take his place.

Forcing herself to take deep breaths, Kat
snapped the Xanax in half with her thumbnail and swallowed it with
a swig of water. She grimaced at the acrid taste as she put the
other half back in the bottle. Lifting her chin, she picked up her
guitar case. It didn’t matter. She’d show everyone that she could
shred with the best of ’em.

When she entered the studio, the guy looked
up from the counter and sneered. “Girlfriends aren’t allowed in
here.”

“I’m not anyone’s girlfriend.” Kat lifted her
guitar case. “I have an appointment with Bleeding Vengeance.”

The guy blinked. “
You’re
the studio
musician they’re trying out?”

Resisting the urge to roll her eyes, Kat
nodded. “And possibly their next guitarist.”

The son of a bitch scoffed. “A chick in
Bleeding Vengeance? No way, it’ll never happen. You couldn’t fill
Lefty Swanson’s shoes.”

“We’ll decide that ourselves, Frank,” a soft
voice countered before Kat could retort. An extremely tall man had
emerged from a recording room, just outside a shaft of sunlight
from the window. “Katana James?” he inquired.

She started forward and froze with a gasp. It
was none other than Klement Burke, the bassist of Bleeding
Vengeance. But he was more than just the bassist. He was the brains
behind the whole band and composed almost half of their songs.
Which meant that he’d be the one to decide her fate. He was the one
who’d first called her for an interview.

When she’d answered the phone, Kat had almost
embarrassed herself, mistaking him for the IT guy who worked on
Metalness.com, the fan website she and Kinley ran on the side while
pursuing their music careers. Klement’s voice was eerily similar to
IT Guy’s. Thankfully, he hadn’t seemed to notice Kat’s confusion as
he questioned her intently about her musical background and
abilities. He then sent her the MP3s of the songs she needed to
learn and set an appointment for her to come down to the studio in
Denver for a session. Now, here she stood, staring up at him like
an idiot.

He had to be near six and a half feet tall,
way taller than he appeared in their album pictures or on stage.
Long, sandy blond hair caressed his shoulders, curling slightly at
the ends. His blue-green eyes danced with mischief and
intelligence. Some strange, intense feeling tightened Kat’s stomach
and chest, making it hard to breathe.

She stared for what felt like an eternity,
her heart pounding before she recovered herself and nodded. “Yes,
I’m Katana.”

Klement gave her an unreadable smile and
gestured for her to follow him to where the rest of the band
waited, including Cliff Tracey, the lead singer and her biggest
crush. Kat didn’t know what would be worse: Klement rejecting her,
or humiliating herself in front of Cliff. Sucking in a deep breath,
she squeezed the handle of her guitar case in a death grip and
followed.

The bassist’s long strides led to small break
room where three men lounged, men she’d only seen from a distance
on stage at concerts and up close on posters on her wall. Roderick
Powell eyed her up and down with a friendly smile.

The View from Mount Dog by James Hamilton-Paterson
Voyage By Dhow by Norman Lewis
Yorktown: Katana Krieger #1 by Bill Robinson
An Alien Rescue by Gordon Mackay
Gregory Curtis by Disarmed: The Story of the Venus De Milo
An Ordinary Epidemic by Amanda Hickie
What We Knew by Barbara Stewart
Kiss Her Goodbye (A Thriller) by Robert Gregory Browne
The Gemini Deception by Kim Baldwin, Xenia Alexiou
Reel Life Starring Us by Lisa Greenwald