Read Within a Captain's Hold Online

Within a Captain's Hold 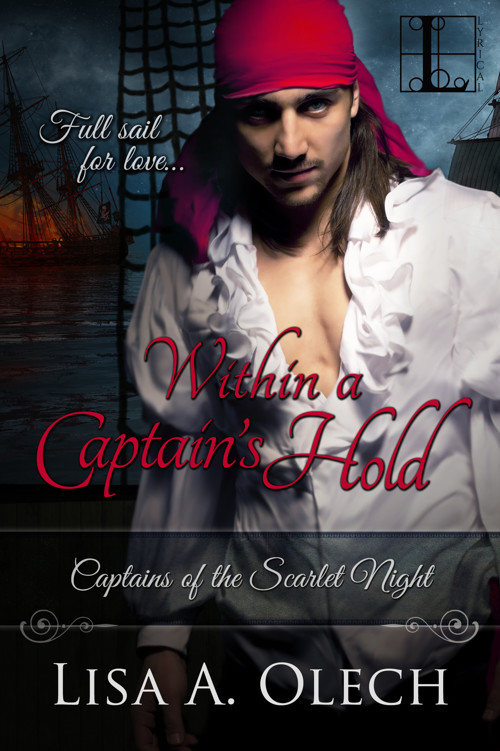 Captain Marcus James is a tall, sun-bronzed, fierce-fighting Pirate King. He and the notorious crew of the Scarlet Night are both feared and respected for their ruthless reputation. The Captain’s only love is the open sea and the ship he calls home. When it comes to women, he has three rules: never sleep with another’s wife, don’t take virgins into bed, and most importantly, never bring a woman aboard—that brings the worst luck of all.

Annalise Gatherone has to leave London—tonight! Usually her only concern is the color of her latest gown, but now she’s choosing between life and death. Desperate to escape the clutches of an evil Duke, she stows away aboard the Scarlet Night, hoping she’s bound for Port St. Maria. Winning Captain James’ affections, she just might sneak by unharmed. But when her plans are altered in ways she never imagined, she must batten down the hatches for a journey into unknown waters…

Books by Lisa A. Olech

Captains of the Scarlet Night

Within A Captain’s Hold

Within A Captain’s Treasure

Within A Captain’s Power

Within A Captain’s Hold

A Captains of the Scarlet Night Novel

So many hands have lovingly touched this story, it would be impossible to list them all here. Please know that I am eternally grateful for each an every one. A special thank you to Kathy, my rock; Dawn, my coach; Amanda, my guide; and Renee, my host.

Thank you to the NHRWA for…well, everything.

Dianne and Ruth, who have loved this book from the beginning.

Captain Jaxon Steele buttoned the flap of his breeches. He turned and tossed his favorite wench a coin. She slipped the gold piece into the tight cleft of her cleavage. How many coins had disappeared into that fleshy purse?

Giselle rose, pulled the edges of her worn silk robe closed, and tied the belt loosely about her waist. She handed him his linen shirt and stayed close as he pulled it over his head.

“Can’t you stay?” She ran her hands over his shoulders, smoothing the fabric and pressing her body against his. “You smell like fresh sea air. So handsome, too. Your whole body’s been kissed golden by the sun.” She toyed with his earring and ran her fingertips down his chest, tugging gently on the dark hair. “Do you have any idea the pale, ugly creatures I’m called to service?” Her voice purred low and graveled like the sand beneath his feet when he walked along the shore.

Jaxon caught her hand as she slid it boldly past his waist. The silver bracelets crowding her wrist clattered.

“The
Scarlet Night
sails on the tide.”

He put her away from him and continued dressing. “Set sail on a Friday?” He wound a crimson sash snug about his waist. No seaman would take such a risk. “It’s bad luck.”

“Well, how about another go? I won’t even charge you.”

“I’ve dallied too long already.” Jaxon crossed the cluttered room to the looking glass. Paste beads and a length of faded pink feathers hung from its corners. He pulled his hair back into a tidy queue.

Giselle went to the mirror and pushed at the stray curls circling her painted face. She fixed a smudged red lip and splashed more foul-smelling, floral stink behind each ear from a crystal stopped bottle. “Fine.” She flicked her hand at him. “If you’re going, go. I’ve more important things to do. I may have to strangle a man.” Giselle moved back to the bed, jerked up the faded cover, and punched at its garish pillows. “I swear if I cross paths with a certain duke, I’ll kill him with my bare hands.”

Giselle heaved a dramatic sigh and pouted as she examined her fingernails. “Weren’t you in a hurry to leave?”

You’re between me and the door, woman.
“Nay.” Impatience clipped his words. The muscle in his jaw twitched. “Tell me about this soon-to-be strangled duke. Did he forget the proper gratuity?”

“If only it were that simple, I’d just have his noble nose broken.” She rolled her eyes. “No, he came to the house two nights back and paid three times the rate for an innocent. He told me he only wanted the girl if I could swear she was a virgin. A real popinjay with lace cuffs, high wig, and red-heeled shoes.”

Giselle poured herself a glass of wine and took a healthy swallow. “We found her almost dead next morning. He’d torn her and beat her. She was a bloody mess. Cost me a pretty coin to call a surgeon, too. He didn’t think she’d survive. I’m not sure she’ll ever be right in her mind again. Next day, the duke sends his man. Stuck-up jackanapes. With a damn sack of coins. Said he’d shut me down if I talked, or worse.”

She scoffed. “I don’t ask names, and they sure as hell don’t pull up to my door in their crested coaches. Our doorman said his hitch bore a gilt monogram on its door. It read BW.”

“I could leave a couple of my men behind.”

“He wouldn’t be fool enough to come back. I told his man I’d dump his satined arse in the Thames with the rest of the filth if he ever crossed my threshold again, and no amount of gold would save his hide.” Giselle finished her wine. “Besides, I’ve got my own protection. The last thing I need is two of your pirates around here sniffing after my girls.”

“Pirates, privateers. You mean to tell me there’s a difference?”

Jaxon puffed his chest a bit. “Means King Willie can’t fit me for a necktie and the well-heeled gentlemen of the ton tolerate my presence for a scant minute longer than before.”

“How lucky for you.” Giselle flipped the end of her nose with a finger. “Would you care to hear how long they tolerate me?”

He laughed as he bent to slide his feet into tall, black bucket-topped boots. “I’d guess about thirty seconds longer than it takes them to drop their pants.”

He dodged the pillow she threw at him.

“Take your smart mouth and get out before I forget my fondness for you.”

“Are you sure you don’t want me to leave some protection behind? Suppose he is fool enough to come back?”

Giselle shook her head. “I’m not afraid. He would never get past the boys downstairs. I’m safer than the bloody crown jewels.”

Jaxon walked back through murky streets toward the dock. Muffled music from nearby taverns wove through the heavy mist. Two large shadows up ahead were tossing a third unceremoniously into the gutter. The drunken man sputtered slurred obscenities at their backs and tried to stand.

Scattered lantern light bathed the dock in an eerie yellow glow. He could just make out the ghosts of ship masts up ahead. The air lay thick as wool.

Giselle’s tale nagged at him. What kind of cowardly swine beat upon a woman? And a virgin, no less? Paid three times the price for one? He must be a half-wit as well as being spineless. Jaxon wouldn’t pay a farthing for an inexperienced whore. He’d sworn off virgins a long time ago, and for good reason.

Jaxon climbed the wide-boarded ramp and dropped onto the gleaming crimson deck of the
Scarlet Night.
The creak of wood and rigging greeted him like a favorite song. Lanterns lit the ship to aid in the loading of provisions. Two crewmen laughed as they passed him, pulling a handcart heavy with supplies. Their jovial mood matched his.

In all his twenty years upon the sea, he’d never lost the adventurous rush he got before setting sail. Now, he sailed a protected man. A favorite of the crown. A king in his own right, with the finest ship and crew to sail the Atlantic. None of it was a gift. He’d fought, scratched, and battled his way to the top. His reward was the respect of those who knew enough to fear him--and the hatred of those fool enough not to.

One more sail to Port Royal, where he and his crew could put up for the winter months in warmth, rum, and women. Another sweep of the ocean to fill their chests with gold and silver that would allow them to live like princes on that pirate island. The sea whispered like a lover in his ear.
Time to weigh anchor and be away.

Jaxon stood at the helm as the
Scarlet Night
moved out of the crowded harbor. The sea stretched out dark and wide before him. He sighed the sigh of a man happy with his lot. London quickly lost her sheen. Even with good news from the Admiralty concerning his Letter of Marque and Reprisal, he’d had it with the feel of solid ground beneath his feet.

The crew followed his shouted orders to weigh anchor with practiced efficiency. Men heaved ropes, secured lines, and soon the sails were set. The heavy canvas snapped before catching the wind and bowed like a rich man’s belly as the
Scarlet
began her impatient leap through the moonlit tips of the waves.

Keeping with pirate custom, he received ample compensation for his leg and fingers, and earned the security of lifetime status within the crew. Fortunately, Cookie turned out to be an accomplished cook and a decent surgeon. Lucky for him and his fellow crewmen he worked left-handed and no man was fool enough to call him Pinkie.

Cookie breathed deep, scratched the scrub of graying beard decorating his chin, and beat on his chest with both fists. “Nothin’ like the first breath o’ open sea air.”

“Think we could be sailin’ toward some weather, though, Capt’n.”

Jaxon shook his head. Sailors were a suspicious lot, none more than Cookie. “You worry like an old woman.”

Alien's Orphan Bride: A Sci-Fi Alien Romance (Mail Order Human Book 4) by Sue Mercury, Sue Lyndon
Dying for Justice by L. J. Sellers
Here at the End of the World We Learn to Dance by Lloyd Jones
Close Encounters by Kitt, Sandra
Mad About You by Sinead Moriarty
Those Who Walk Away by Patricia Highsmith
The Corps of the Bare-Boned Plane by Polly Horvath
Goddess of Legend (Demi-God Daughters) by Tanner, Erin Ashley
Lovely, Dark, and Deep by Julia Buckley
Raven and the Rose by Knight, Charisma