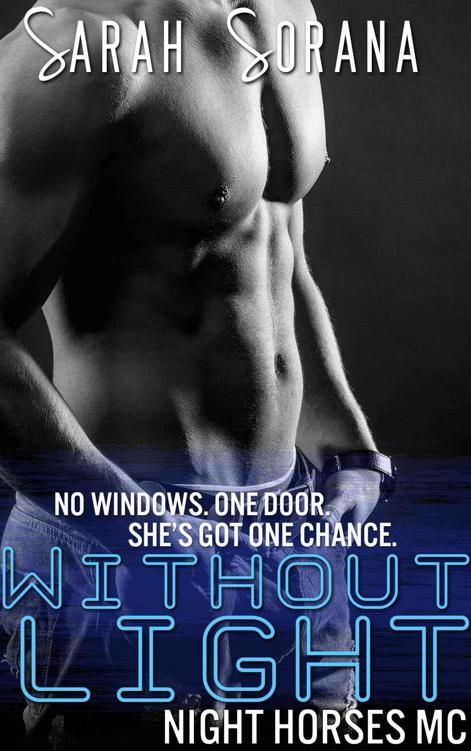 Okay, first of all, I’m on
Facebook
now to talk to y’all. Please don’t hesitate to add me or send me a message – I’m busy, but I WANT to talk to you. I WANT your feedback. That’s what this is all about, and I love each and every one of you for reading my work!

My next project is in the works – the Sarah Sorana Hot List. Find out about my new books before anyone else!

He'd been excruciatingly clear on that front. I knew exactly what information he wanted from me.

There was only one trouble.

I didn't have it.

I didn't know how long it had been since I was taken, but I knew it had been too, too long. I figured I'd be rescued by the cops or by Merle or by someone, anyone, within the first few hours.

I mean, let's be honest: I was a pretty suburban girl with a bright future. If you have to be kidnapped, there's no better person to be other than maybe an adorable child - people are going to look for you.

It's not fair, but when I was huddled in the back of that car being driven away from my home, I didn't care about fair. I cared about results. I cared about getting home. I cared about my dog, my poor Bear, who'd been hit by these assholes.

I mean, how unfair can you get?

Taking me was one thing, but you can't get much lower than hitting an old Lab. They're basically made of arthritis held together by love.

The man repeated himself. "Listen, you dumb bitch."

Him repeating himself was never good for me.

I tried to escape inside my head, to think of something happier, but all I could think about was the awful car ride I'd gone on...

"Merle, please find me," I whispered to myself, confident that no one would hear me over the sound of loud music and men talking cheerfully.

I could hardly believe that they could sound so normal. I didn't understand Spanish - I mean, I had taken a few years in high school, so I got maybe one word in twenty - but they were laughing and talking over each other.

They were having a normal, friendly conversation, in the car where they’d kidnapped someone. That chilled me.

I wanted them to think that this was a big fucking deal, to be afraid and angry and on edge.

Apparently, to these men, kidnapping a teenager was just another day.

The thought of that made me start shivering, even though by rights I should have been overheated. I tried to curl up smaller, but apparently got in someone’s way.

When I brushed a pair of boots, it withdrew for a moment and then connected in a hard kick to my back.

I spent the rest of the car ride shivering and crying.

“
Where do those assholes keep the dope?” Jefe said. Boss. That’s all I knew him as - el Jefe.

He raised his hand and I flinched.

Instead of hitting me, he left, turning off the lights as the door shut.

El Jefe had beaten me, he’d tied me up and doused me with cold water again and again, he’d spit on me and screamed at me and threatened my family… but nothing compared to being left alone in the dark.

The first time he’d abandoned me in my prison, I’d been relieved. At least he wasn’t hurting me.

I don’t know how long I was in there before I started to hear things.

There was nothing quite as terrifying as being trapped in a featureless void, knowing that someone was going to appear to hurt me, but not knowing when or where or how.

As my hunger grew, I started to wonder if they would forget about me entirely, if they’d just leave me to starve to death.

I curled up in a ball and waited, whimpering and shivering.

This time, I told myself, I’d be braver.

Last time, I had managed to rise to my knees in the dark and find a wall. Just that little bit of progress against my fear had felt like a victory worth a ribbon cutting and buckets of confetti.

This time, I would stand up.

Come on, Megan
, I told myself.
You can do this.

I pulled myself to my knees in the dark. That was step one.

It took almost everything I had to force myself to crawl to the wall. Not knowing where the world stopped and started made me feel like I was going to pitch off into a featureless void.

I did it, though. I almost cried when I felt the wall under my hand. I turned and leaned into it as though it were my mother’s strong embrace, feeling the comforting weight of it against my side.

Okay,
I told myself,
time to stand up.

I could do this.

I leaned away from the wall and pressed both of my palms flat against it. I took a few deep breaths, feeling the slightly rough texture under my hands, cool and hard and present.

My bare feet found the rough concrete floor underneath me and I squatted, and then stood.

Even if they forgot me, even if they came back, I wasn’t going to die crying in the fetal position. I could still control my own body.

I forced my aching limbs to move, pacing around the room with my hand on the wall. I’d seen it plenty in the light from the bare bulb when Jefe was in here with me.

There was a pile of disgusting rags in one corner. I hadn’t gotten desperate enough yet to use it as a bed. When I caught a few minutes of sleep, I simply curled up with my head on one arm.

It left me with an aching body, but I swear I once saw the bedding move.

The room did
not
have a toilet. They sometimes led me out to a bathroom down the hall, but mostly I held it.

There was a bucket.

I had not gotten that desperate yet.

It was a small mercy that they had not fed me enough to make that urgent.

I stumbled around two laps of the room. Ten tiny shuffling steps in one direction, fifteen in the other. Maybe five feet by eight feet. The room was too narrow for me to stretch out in one direction.

Sometimes Jefe brought a chair in with him. Mostly he came and yelled and kicked me and left.

I was still wearing my pajamas. They were disgusting.

I was still barefoot.

Two laps of the dark room took everything I had. I collapsed, holding my knees and rocking. Everything hurt. I felt like one giant bruise punctuated by sharper pains.

I was pretty sure that one of my fingers was broken, the way it was swollen. I didn’t even care when I was touching the wall, but once I had sat back down and felt tiny and alone, it screamed and I couldn’t think about anything else.

The tears ran down my face unchecked.

I knew I had to stop crying. Hysterics would do nothing but dehydrate me, and I only got water sporadically.

I took a deep breath.

I had to think.

What did I know?

What did I know?

I knew that my parents would be looking for me. They had been frantic and called the cops and been out searching when I was a few hours late from prom.

I ticked off people on the fingers of my good hand, people I knew loved me and would notice I was gone.

They’d all look for me. They’d find me. It would be okay.

I took another deep breath and started again.

I’d spent the car ride here, and the first few days, hoping that Merle would swoop in and save me from these assholes.

Instead, there was only me, and el Jefe, and this room. Occasionally the hallway.

I was sitting as far away from the door as I could get, but I knew it could open at any minute and light and men could pour in and scream at me and kick me again and again.

It was ridiculous. I barely knew the man, and I wanted him to save me.

Of course, if I’d never met him, I wouldn’t be in this fucking room.

That much was obvious.

They were beating me, they’d locked me in here, all to find out about Merle’s dope.

I kept telling them that I didn’t know anything, that I was clueless.

The light clicked on.

Deep breath. I blinked, and huddled further into myself. I shut my eyes and hid my face.

I heard soft footsteps and smelled something wonderful.

A gentle noise, a clinking of something put down next to me.

I heard someone, someone smaller than Jefe, sit down at the other end of the room.

I opened my eyes and saw a small, dark-haired girl sitting across from me. She was about my age, and looked familiar.

“
I’m sorry,” she said. “You were with that man. You were drawing all those tattoos, telling him about el Jefe. I thought you must know a lot.”

The waitress from the Mexican restaurant.

I shook my head, mutely.

“
They let me bring you some food,” she whispered.