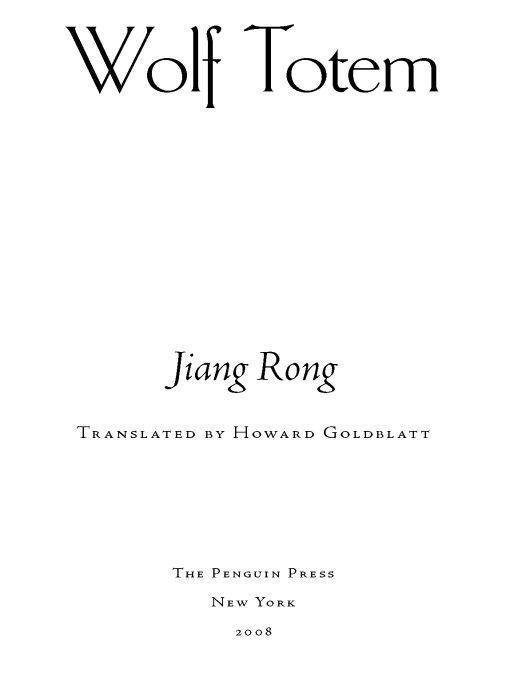 Translator’s Note
In 1969, a young Chinese intellectual from Beijing answered Chairman Mao’s call for city dwellers to go “up to the mountains and down to the countryside,” joining as many as a hundred like-minded youngsters in traveling to one of China’s most remote, most “primitive” spots: north-central Inner Mongolia. While most of the fifteen to twenty million young urbanites who were sent out of the cities to be “rusticated” dreamed constantly of going home and, insofar as possible, shunned close attachments to their rural hosts, Jiang Rong did in fact learn from and befriend the herdsmen with whom he lived and worked. In all, he spent more than a decade as a shepherd on the sparsely populated Olonbulag, a fictional setting in the Ujimchin Banner, a hardscrabble existence in a place where life is unimaginably hard on all its inhabitants, man and beast.
Despite its remote location and hostile environment, Inner Mongolia was not spared the excesses of the disastrous Cultural Revolution (1966-1976), when the nation was on war footing, arrayed against domestic enemies of the state and international enemies of the nation, real and imagined. The “four olds” (old thought, old culture, old customs, and old practices) were under attack, targeting, in particular, ideologically “backward” members of superstitious and conservative rural societies. When they weren’t working to bring down important political, military, and cultural figures, Red Guard factions spent their time tormenting ordinary citizens. Military organizational schemes replaced traditional tribal order, military terminology was in vogue, and military commanders, competent or not, were placed in charge of production activities. In Mongolia, it was an onerous time for people whose lives were centered on respecting the ways and superstitions of their ancestors. They took great pride in the military conquests of those ancestors—the great Mongol hordes of the twelfth and thirteenth centuries—and were unmoved by the ideologies of Mao and his followers, whose Han ancestors had been no match for the mounted warriors of Genghis Khan. The key to the success of the khans, according to Mongol legend, as the author discovered during his years on the grassland, was the wolf, the only significant land-bound predator that was able to thrive for thousands of years.
Wolves have captured the imagination of peoples everywhere, but seldom have they been venerated to the extent that they are by nomads of the Mongolian grassland. Their paradoxical role in the people’s lives—as predator and prey, as defilers of herds (the “little lives”) and protectors of the grassland’s ecology (the “big” life), and as animals to be feared and at the same time revered—forms both the actual and the metaphorical core of this magnificent novel. Wolves, courageous and ferocious, loyal to the pack, and respectful of their environment, are posited as an antidote for what ails Chinese society—a society the quasi-autobiographical protagonist compares to the sheep he tends and which he must protect against the clever, almost supernaturally shrewd wolves he so admires. The symbiotic relationship between the herdsmen and the wolves, participants in a delicate ecological balancing act of keeping at bay the Gobi to the west and the Han Chinese to the south, is threatened by encroachments by both.
Wolf Totem,
which sold in the millions in China—in both authorized and pirated editions— ushered in heated debates on the Chinese “character.” It is a work that compellingly blends the passion of a novelist who lived the story he tells and the intelligent ethnological observations of a sympathetic outsider.
In 1979, when Chinese society was trying to rid itself of the effects of the Cultural Revolution, Jiang Rong was admitted into the Chinese Academy of Social Sciences as a graduate student. In 1988, Jiang Rong, who had become a political scientist attached to Beijing University, began writing this novel, obsessed with a story that had stayed with him for nearly twenty years; six years later it was finished and instantly became a runaway bestseller.
In the translation of
Wolf Totem,
I have been aided by several people. First and foremost, the author and his wife graciously and enthusiastically responded to all my inquiries concerning both textual and cultural matters. Mongolian spellings were supplied by Chigchin, a graduate student in English at the Inner Mongolia University. At Penguin, both the novel and the translator were aided by Jo Lusby in Beijing and Liza Darnton in New York, and, most significantly, by the skillful and imaginative editing of Beena Kamlani. Sandy Dijkstra was instrumental in getting the project started. Finally, Sylvia Lin read and commented on the entire translation, as she always does. To all, my heartfelt thanks.

1
As Chen Zhen looked through the telescope from his hiding place in the snow cave, he saw the steely gaze of a Mongolian grassland wolf. The fine hairs on his body rose up like porcupine quills, virtually pulling his shirt away from his skin. Old Man Bilgee was there beside him. This time Chen did not feel as if his soul had been driven out of his body, but sweat oozed from his pores. He had been on the grassland two years but still had not lost his fear of Mongolian wolves, especially in packs. Now he was face to face with a large pack deep in the mountains, far from camp, his misty breath quivering in the air. Neither he nor Bilgee was armed—no rifles, no knives, no lasso poles, not even something as simple as a pair of metal stirrups. All they had were two herding clubs, and if the wolves picked up their scent, their sky burial would come early.
Chen exhaled nervously as he turned to look at the old man, who was watching the wolf encirclement through the other telescope. “You’re going to need more courage than that,” Bilgee said softly. “You’re like a sheep. A fear of wolves is in your Chinese bones. That’s the only explanation for why you people have never won a fight out here.” Getting no response, he leaned over and whispered, “Get a grip on yourself. If they spot any movement from us, we’ll be in real trouble.” Chen nodded and scooped up a handful of snow, which he squeezed into a ball of ice.
The herd of Mongolian gazelles was grazing on a nearby slope, unaware of the wolf pack, which was tightening the noose, drawing closer to the men’s snow cave. Not daring to move, Chen felt frozen in place, like an ice sculpture. This was Chen’s second encounter with a wolf pack since coming to the grassland. A palpitating fear from his first encounter coursed through his veins.
ADS
15.4Mb size Format: txt, pdf, ePub

Zack and the Dark Shaft by Gracie C. Mckeever
Wife for a Day by Patti Berg
Dragonfly by Leigh Talbert Moore
Eminencia by Morris West
The Bizarre Truth by Andrew Zimmern
The Lady Is a Thief by Heather Long
The Waiting Room by Wilson Harris
Love Me? The Trust Me? Trilogy by K E Osborn
The Inheritance (Happy Endings Resort Book 1) by Benson, Jennifer
Septimus Heap 3 - Physik by Sage, Angie