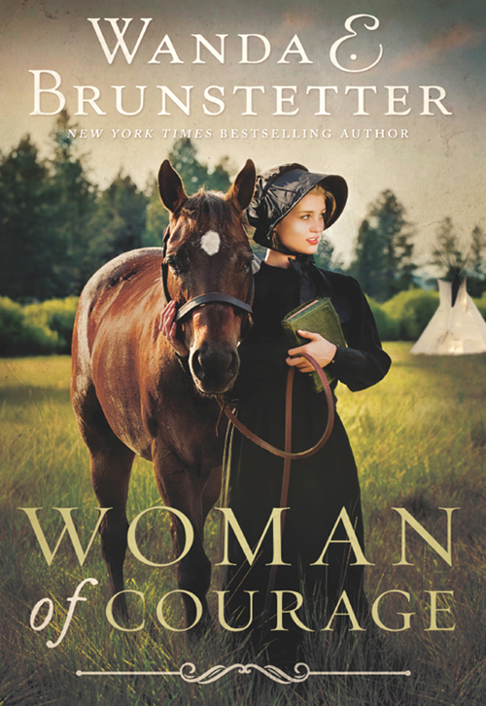 All rights reserved. No part of this publication may be reproduced or transmitted in any form or by any means without written permission of the publisher.

All scripture quotations are taken from the King James Version of the Bible.

This book is a work of fiction. Names, characters, places, and incidents are either products of the author’s imagination or used fictitiously. Any similarity to actual people, organizations, and/or events is purely coincidental.

Our mission is to publish and distribute inspirational products offering exceptional value and biblical encouragement to the masses
.

To my friend Jean Otto, a woman of courage.

Finally, my brethren, be strong in the Lord, and in the power of his might
.

A
shiver of excitement ran through Amanda Pearson as she gazed at her mother’s wedding dress lying across the end of her bed. Once more this dress would be worn to honor a new beginning. Tomorrow, Amanda would become Mrs. Nathan Lane, and she could hardly wait.

Nathan was all she had ever wanted in a husband. He was attractive, with thick blond hair and pale blue eyes. Nathan owned his own carriage-making business and was doing quite well financially. But it wasn’t Nathan’s good looks or lucrative occupation that attracted her to him. What Amanda found most appealing about her future husband was his confident attitude and good standing in their Quaker church. Everyone said they made the perfect couple. Even Amanda’s father, a widower and preacher, approved of Nathan and seemed quite eager to see Amanda happily married.

A knock sounded on Amanda’s bedroom door, halting her musings. “Come in,” she called.

The door opened, and Papa stepped into the room. “Nathan is downstairs, Daughter. He wishes to speak with thee.”

Amanda glanced at the clock on her bureau, noting that it was half past eight. “Nathan is here now? I didn’t expect to see him until tomorrow evening, when we become man and wife.”

Deep wrinkles formed across Papa’s forehead as he scrubbed his hand down the side of his face. “Nathan said it’s urgent.” Papa shifted uneasily, his pale blue eyes blinking rapidly. “I asked if something had happened in his family, but he wouldn’t say. All I could get out of him was that he wanted to talk to thee and it couldn’t wait until tomorrow.”

A tremor of fear shot through Amanda.

“I shall retire to my room for now so that thou mayest speak to Nathan privately,” Papa said.

Amanda paused in front of her mirror, pinched her cheeks to give them a bit of color, and followed her father out of the room.

Downstairs, she found Nathan in the parlor, pacing from the window to the settee.

“Good evening, Nathan,” Amanda said, stepping up to him. “I understand thou wishest to speak with me.”

Nathan stopped pacing and averted his gaze, looking over her shoulder toward the door.

“What is it? Has something happened at home—to one of thy parents, perhaps?”

“Mother and Father are fine.” Nathan began pacing again. He stopped beside Amanda and reached for her hand. His fingers were moist. “I—I should have told thee sooner, but I cannot marry thee tomorrow.”

Amanda’s spine stiffened as she tried to digest what he had said. “Wh–why not?” she asked in a whispered voice.

He took a deep breath, then cleared his throat. “I am in love with someone else.”

Amanda quickly withdrew her hand as shock coursed through her veins. She grabbed the back of the settee for support. “Who has stolen thy love from me, Nathan?”

“Penelope Goodwin. We have been seeing each other secretly for many weeks.” Nathan placed both hands against his temples, making little circles with his fingertips. “I thought it was just a passing fancy, but as time went on, it became much more.”

Penelope Goodwin
. The words echoed in Amanda’s head.
Oh Penelope, how couldst thou have done this to me? I thought we were friends
.

“I’m sorry,” Nathan said, “It was wrong to let our relationship go on this long, and I know it’s a lot to ask, but I hope thou wilt understand. It wouldn’t be right for us to marry when I am in love with someone else.”

“No—no, of course not.” Amanda blinked back tears and swallowed the bitter taste of bile in her mouth.

He took a step toward her, but she turned away. “There is nothing more for us to say,” she murmured.

Amanda cringed when she heard his heavy footsteps retreat. The door clicked shut behind him. She breathed deeply, trying to calm her racing heart. Her dream of becoming Mrs. Nathan Lane lay destroyed. The months during which Amanda had thought their relationship blossomed into something that meant so much had just been ripped away as if they had never happened. Had she been blinded by the truth? Was she a fool for trusting Nathan so deeply? Whatever the answers to those questions, Amanda was certain about one thing: she was destined to be an old maid. As clearly as the full moon beamed through the parlor window, she knew she would never fall in love again.

A
manda tried to hide it, but she was tired and out of sorts. She wasn’t used to sitting sidesaddle on a horse for hours on end, but that’s what she had been doing since they’d left Fort Laramie early that morning. Harvey Hanson, the guide Papa had hired for their journey west, said they needed to make as many miles as possible during the daylight hours. He also warned them to be on the lookout for hostile Indians who might already be aware of their departure.

When Amanda and her father had first arrived at the post and met up with Harvey, the burly looking man had explained that Fort Laramie wasn’t a military fort, but a trading post established by fur traders in 1834. Its true name was “Fort William on the Laramie,” but most folks referred to it as simply “Fort Laramie.” Just last year the post had become the headquarters for the American Fur Company.

Amanda had felt a bit nervous, seeing all the Indians camped in areas outside the post, but Fort Laramie was the central location for trading with the Sioux and Cheyenne. Trading buffalo robes, the fort’s primary commodity, was fast replacing the once-prevalent beaver fur trade. The Indians exchanged the robes and furs they’d brought for tobacco, blankets, powder, lead, beads, and unfortunately alcohol.

While those facts interested Amanda, she shuddered, remembering Harvey’s stories about some of the aggressive Indian tribes. He’d mentioned torture such as thrusting sharpened sticks into prisoners, heaping red-hot coals on their bodies, or cutting off their fingers and toes. While Amanda trusted the Lord to protect them every step of the way, she would keep a wary eye out for enemies. She could never endure such agonizing pain, and knowing what was possible made her feel as if their every move was being watched by some Indian’s keen eyes.

Harvey was strictly business. He seemed to be better at barking out orders than engaging in idle chitchat. He spit a lot, and each time, Amanda cringed. But Papa had been told that Harvey was good at what he did, so Amanda was grateful that he was their guide. She could ignore his annoying habits in exchange for a safe, uneventful journey.

When Harvey removed his worn-looking beaver-skin cap earlier that morning, she’d noticed a scar on the back of his head. No hair grew in the small area, and Amanda wondered what had happened. Maybe he’d been attacked by a hostile Indian and managed to escape with his life. Or perhaps he had tangled with some wild animal. It was probably best not to know.

She glanced over at Papa, slouched in his saddle, seeming half-asleep. As if sensing she was watching him, he sat up straighter, stretched his back, yawned, and slumped once more. This trip seemed to be taking its toll on him. Soon after they’d left the fort, Papa said he felt light-headed and short of breath. Concerned for his welfare, Amanda had suggested they go back to the fort to rest a few more days, but Papa assured her that he would be fine and was determined they continue. Amanda wasn’t surprised. Although blessed with many endearing qualities, her father could be a bit stubborn.

Of course, the same could be said about me
, she reasoned.
But Papa’s really a dear man
. She reflected on how he had insisted on coming with her on this trip. After Amanda’s engagement was broken, she’d announced that she wanted to go west and join the Rev. and Mrs. Spalding in their mission to bring the Good News to the Nez Percé Indians. “I will not send my daughter into the wilderness to face unknown dangers alone,” he said.

While Papa received no pay for his service as a Quaker minister back home, he’d worked as a cabinet maker for a good many years and had saved up some money. Since they didn’t know if or when they would return to New York, he’d sold their home, his business, and all their belongings except for the few things they would need for this trip. Using some of the money, Papa had secured passage for him and Amanda on a steamboat, which took them to Cincinnati. From there, they’d boarded another steamboat to St. Louis, and then a third boat to Liberty, Missouri. Continuing on their journey, they rode in wagons with some fur traders, following the Platte River to Fort Laramie, where they met the man who would guide them to the mission. Harvey had said the rest of the journey would be best made on horseback without taking any wagons over the mountains.