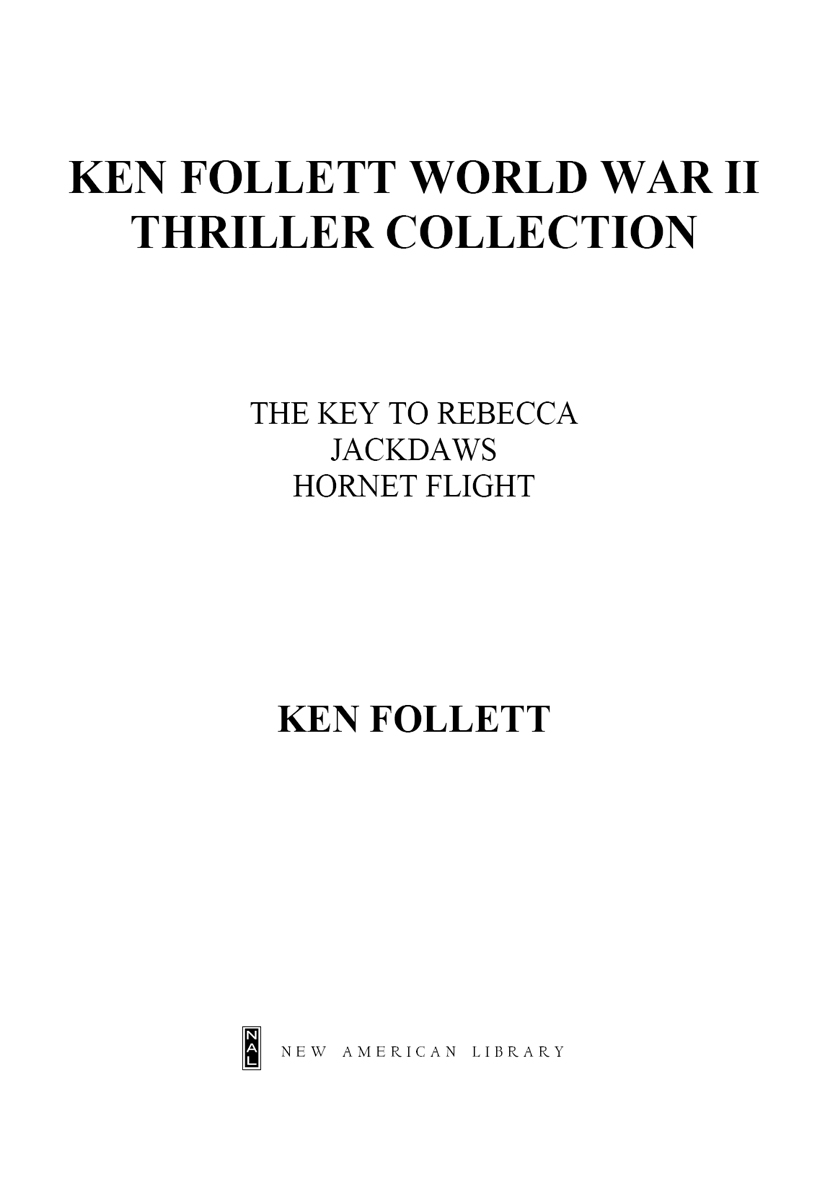 Eye of the Needle

The Key to Rebecca

The Man from St. Petersburg

On Wings of Eagles

Lie Down with Lions

The Pillars of the Earth

The Hammer of Eden

The Key to Rebecca 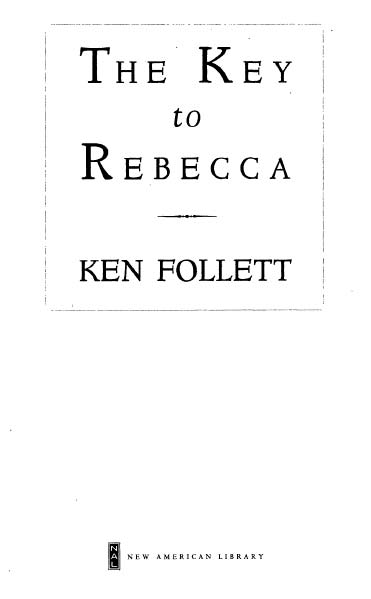 REGISTERED TRADEMARKâMARCA REGISTRADA
Â
Â
Â
Without limiting the rights under copyright reserved above, no part of this publication may be reproduced, stored in or introduced into a retrieval system, or transmitted, in any form, or by any means (electronic, mechanical, photocopying, recording, or otherwise), without the prior written permission of both the copyright owner and the above publisher of this book.
Â
PUBLISHER'S NOTE
This is a work of fiction. Names, characters, places, and incidents either are the product of the author's imagination or are used fictitiously, and any resemblance to actual persons, living or dead, business establishments, events, or locales is entirely coincidental.
The publisher does not have any control over and does not assume any responsibility for author or third-party Web sites or their content.
Â
The scanning, uploading, and distribution of this book via the Internet or via any other means without the permission of the publisher is illegal and punishable by law. Please purchase only authorized electronic editions, and do not participate in or encourage electronic piracy of copyrighted materials. Your support of the author's rights is appreciated.
eISBN : 978-1-101-04265-6

TO ROBIN MCGIBBON
Praise for Ken Follett and his bestselling novels
“Follett is a master.”
â
Time
Â
“An artist of compelling talents.”
âThe Philadelphia Inquirer
Â
“Ken Follett can hold his own with the best.”
âThe Indianapolis Star
Â
“Masterful. . . . Plot and counterplot, treachery, cunning, and killing . . . keep you on the edge every moment.”
âThe Associated Press
Â
“Razor-sharp . . . harrowing . . . a cleverly crafted, easily read novel.”
â
The Dallas Times Herald
Â
“Follett's great strength is his female charactersâthey are smart, strong, independent, and when they love a man, by golly, he knows the game is up.”
â
People
Â
“An absolutely terrific thriller, so pulse pounding, so ingenious in its plotting, and so frighteningly realistic that you simply cannot stop reading.”
â
Publishers Weekly
Â
“Can Follett write. . . ? He outclasses his competitors.”
â
Newsday
“Our spy in Cairo is the greatest hero of them all.”
âErwin Rommel, September 1942
Â
(Quoted by Anthony Cave Brown in
Bodyguard of Lies
)
Table of Contents
Title Page
Copyright Page
Dedication
Â
PART ONE - TOBRUK
Chapter 1
Chapter 2
Chapter 3
Chapter 4
Chapter 5
Chapter 6
Chapter 7
Chapter 8
Chapter 9
Chapter 10
Â
PART TWO - MERSA MATRUH
Chapter 11
Chapter 12
Chapter 13
Chapter 14
Chapter 15
Chapter 16
Chapter 17
Chapter 18
Chapter 19
Â
PART THREE - ALAM HALFA
Chapter 20
Chapter 21
Chapter 22
Chapter 23
Chapter 24
Chapter 25
Chapter 26
Chapter 27
Chapter 28
Chapter 29
Â
ABOUT THE AUTHOR
PART ONE
TOBRUK
1
THE LAST CAMEL COLLAPSED AT NOON.
It was the five-year-old white bull he had bought in Gialo, the youngest and strongest of the three beasts, and the least ill-tempered: he liked the animal as much as a man could like a camel, which is to say that he hated it only a little.
They climbed the leeward side of a small hill, man and camel planting big clumsy feet in the inconstant sand, and at the top they stopped. They looked ahead, seeing nothing but another hillock to climb, and after that a thousand more, and it was as if the camel despaired at the thought. Its forelegs folded, then its rear went down, and it couched on top of the hill like a monument, staring across the empty desert with the indifference of the dying.
The man hauled on its nose rope. Its head came forward and its neck stretched out, but it would not get up. The man went behind and kicked its hindquarters as hard as he could, three or four times. Finally he took out a razor-sharp curved Bedouin knife with a narrow point and stabbed the camel's rump. Blood flowed from the wound but the camel did not even look around.
The man understood what was happening. The very tissues of the animal's body, starved of nourishment, had simply stopped working, like a machine that has run out of fuel. He had seen camels collapse like this on the outskirts of an oasis, surrounded by life-giving foliage which they ignored, lacking the energy to eat.
There were two more tricks he might have tried. One was to pour water into its nostrils until it began to drown; the other to light a fire under its hindquarters. He could not spare the water for one nor the firewood for the other, and besides neither method had a great chance of success.
It was time to stop, anyway. The sun was high and fierce. The long Saharan summer was beginning, and the midday temperature would reach 110 degrees in the shade.
Without unloading the camel, the man opened one of his bags and took out his tent. He looked around again, automatically: there was no shade or shelter in sightâone place was as bad as another. He pitched his tent beside the dying camel, there on top of the hillock.
He sat cross-legged in the open end of the tent to make his tea. He scraped level a small square of sand, arranged a few precious dry twigs in a pyramid and lit the fire. When the kettle boiled he made tea in the nomad fashion, pouring it from the pot into the cup, adding sugar, then returning it to the pot to infuse again, several times over. The resulting brew, very strong and rather treacly, was the most revivifying drink in the world.
He gnawed at some dates and watched the camel die while he waited for the sun to pass overhead. His tranquillity was practiced. He had come a long way in this desert, more than a thousand miles. Two months earlier he had left El Agela, on the Mediterranean coast of Libya, and traveled due south for five hundred miles, via Gialo and Kufra, into the empty heart of the Sahara. There he had turned east and crossed the border into Egypt unobserved by man or beast. He had traversed the rocky wasteland of the Western Desert and turned north near Kharga: and now he was not far from his destination. He knew the desert, but he was afraid of itâall intelligent men were, even the nomads who lived all their lives here. But he never allowed that fear to take hold of him, to panic him, to use up his nervous energy. There were always catastrophes: mistakes in navigation that made you miss a well by a couple of miles; water bottles that leaked or burst; apparently healthy camels that got sick a couple of days out. The only response was to say
Inshallah
: It is the will of God.

That One Moment (Lost in London #2) by Amy Daws
Absolute Beginners by Colin MacInnes
The Curse of the Buttons by Anne Ylvisaker
Labyrinth by Tarah Scott
The Measure of Katie Calloway,: A Novel by Miller, Serena B.
Istanbul by Nick Carter
Brooklyn & Beale by Olivia Evans
Heart-strong by McCune, Bonnie
Southampton Spectacular by M. C. Soutter
A Reaper's Love (WindWorld) by Charlotte Boyett-Compo