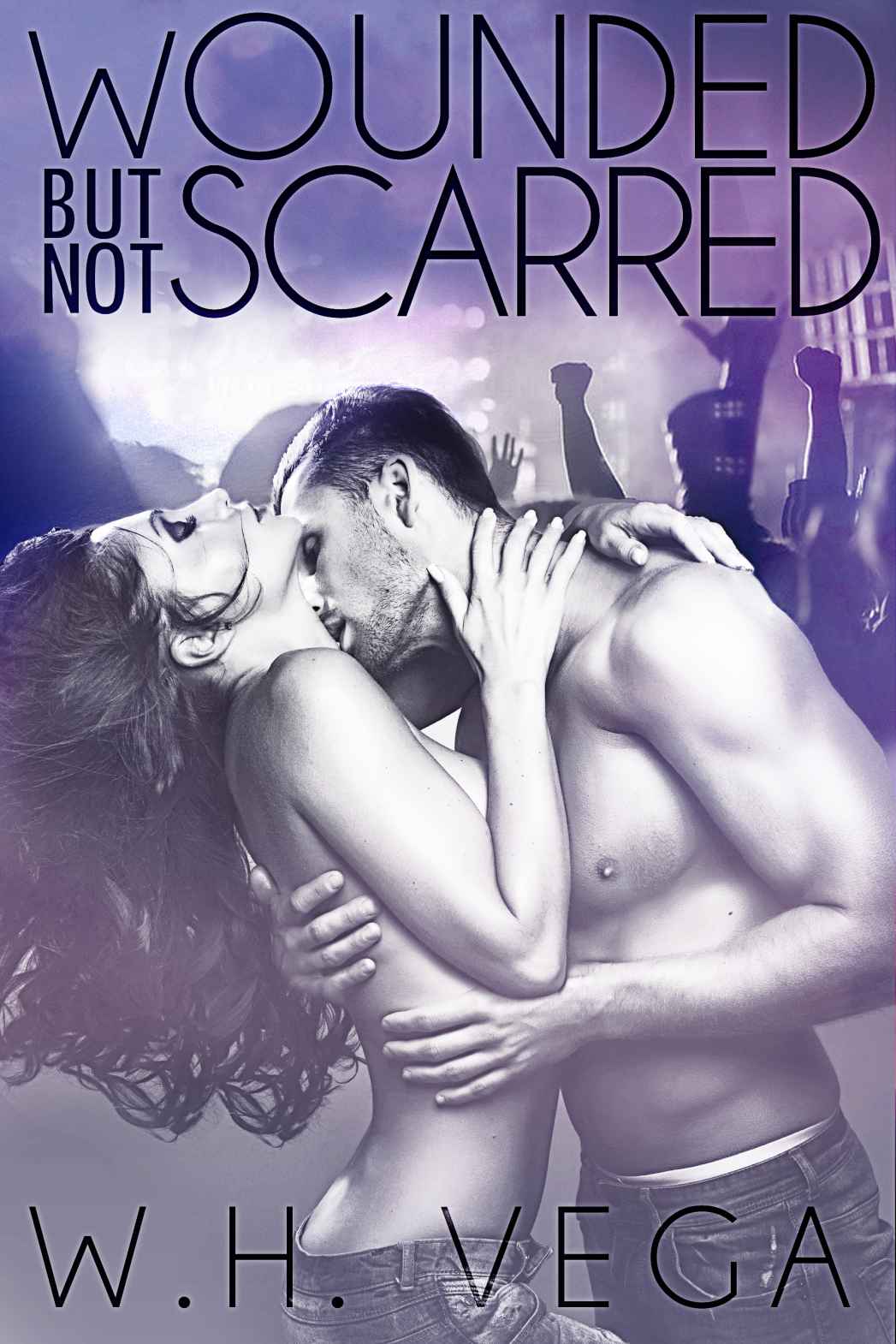 Wounded But
Not Scarred

All rights reserved. This document may not be reproduced
in any way without the expressed written consent of the author. The ideas,
characters, and situations presented in this story are strictly fictional and
any unintentional likeness to real people or real situations is completely
coincidental.

Special thanks to my fellow writers at Hearts Collective
for their continued support and guidance. And a special thanks to all the
readers out there - Love you all!! Oh and remember to post an honest review
(good or bad) when you finish reading :)

Other Books by Hearts Collective:

Damaged But Not Broken
(New Adult Rockers) by W.H.
Vega

Fuel To The Fire
by Brynn O'Connor

Special Thanks to L.J. Anderson

for the beautiful professional cover art.

“I promise! I’m fine!” I insist,
laughing, as I push Blake away from me.

“I know. And that’s why I love
you,” I say honestly, falling back into his arms and resting my head against
his chest. I take a second to listen to his beating heart, and it calms me. I
push myself back up and look into his bright green eyes.

Blake reluctantly releases me and
watches me climb into my car.

“Text me when you get there,” he
says, his eyes clouding with worry.

“I’ll miss you,” he says honestly,
as I start the car.

“I’m gonna miss you too. But we’ll
see each other real soon. And you better take me over to your momma and daddy’s
when we get back,” I threaten.

I don’t want to say that’s been a
cause of contention between us, but it’s certainly bothered me. I loved Blake’s
parents when I was younger, and they had loved me too.

At least they had loved me when I
was fifteen.

Since Blake and I had gotten back
together, and he ditched his bitchy fiancé, his parents had been less than
thrilled. I got the impression that they didn’t care much for Savannah, but they
didn’t like the fact that their son had dropped a girl from one of Nashville’s
most prominent families, just so he could get back together with his childhood
sweetheart.

But I was with Blake for the long
haul now, and it was about time his parents and I got reacquainted.

“Bye baby!” I call out as I pull
out down the driveway. I glance back in my rearview mirror and see Blake
standing by his truck, watching me drive away.

I turn on my favorite country
station and settle in for the three-hour plus drive. Daddy had wanted a quiet
and private rehab facility that was far away from Nashville to keep the gossip
down. Not that all of Nashville didn’t already know my father had a drinking
problem. But he had recently rebuilt his record label and he didn’t need any
more bad press.

I hadn’t heard from my father in
twenty-eight days, and I hoped and prayed that rehab had helped fix him. Ever
since I had been a little girl, my daddy had struggled with his demons and
drinking. It was the reason my parents’ marriage imploded, and why I split my
time between Nashville and Bristol as a young girl.

I spent every summer with my daddy
in Nashville until I was fifteen and had my innocence ripped away from me by
two of my daddy’s redneck drinking buddies. They were currently serving long
sentences in prison, but I got little satisfaction out of that. I had always
blamed my father for what had happened to me, especially since he could have
prevented it if he hadn’t passed out stone cold drunk on the porch that night.
I fled Nashville and left my father and Blake for what I thought was forever.

But then a few months ago, Daddy had
shown up in Bristol to hear me play music and begged for my forgiveness and for
another chance. And on top of all of that, Daddy wanted to sign me to his record
label and help me with my music career. He saw real promise in me, and I didn’t
think he was lying.

So, I faced my own demons and left
the security of Bristol, and my momma and grandma and moved back to Nashville
to live with my Daddy. Not that I was leaving much of a life behind me. I had
become a hermit in Bristol and lived a life devoid of friends or any meaningful
relationships.

Nashville had been one hell of a wakeup
call, and I saw my career soar as I began playing local clubs. What I wasn’t prepared
for was running into Blake Evans in the music clubs too. Turned out Blake had
also chosen music to heal his soul. I felt all my old familiar feelings for
Blake rush back, but I was too screwed up to pursue them, and I learned Blake
had a fiancé. It had been an emotional and confusing time, but somehow Blake
and I had realized we still loved one another.

While I didn’t care at all for
Blake’s ex, Savannah, I did feel bad for how things went down with her. Of
course, she tried to make my life miserable in the process. Blake tried to end
things amicably, and we only slipped up and kissed one time before he broke off
the engagement.

And just when I thought Blake and I
might really make it, my daddy throws me a curveball and starts drinking again.
I sigh as I drive on, reliving that dark time. My daddy started acting weird
while we were on tour, and I missed all the signs of drinking because I so
fully believed in his sobriety. But then there was no denying it.

My daddy was off the wagon.

I thought long and hard about
running away from Daddy and his problems. His drinking had already cost me more
than I could afford. It was one thing to forgive my father once, but I didn’t
know if I had it in me to forgive him a second time. But I had worked hard to
rebuild our relationship, and I realized that if I gave up on my Daddy, who
would he have left?

So, I gave him an ultimatum.

Get clean or I would be gone
forever.

And by get clean, I meant a month
in rehab.

He didn’t like the idea, and I
really thought he was going to refuse to go. But he gave in and I’m glad he
did. We learned that Daddy couldn’t handle being on tour with us because the
temptation was just too great. Now that my career was really taking off, as was
Blake’s, we were going to be extra cautious and make sure that Daddy stayed
clean.

I wasn’t sure what to expect when I
picked up my father, but it had to get better from here. And Blake and I were
stronger than ever and growing closer every day. I loved having Blake with me
at the house while Daddy's been in rehab, but I know that can’t continue now
that he's coming home.

Blake's putting his house up for
sale this week, and then we're going to see what happens. We decided that once
his house is sold, we're going to look for a house together. That’s another
reason why Blake needs to take me over to his parents. Moving in together is
not going to be smooth if his parents still haven’t seen me since we reunited.

The thought gives me butterflies
and I force myself to start thinking about my Daddy again.

Once we get home tonight I'm going
to cook Daddy his favorite dinner, and then we're going to spend the weekend
together, just he and I.

My dad hopes to return to work on Monday,
and his assistant Becky's fully aware. She has done a hell of a job keeping the
office running, and she also promises that Daddy will have an easy first week
back, easing back into the demands of running a record label. Some of his
colleagues had really stepped up their game at work and handled some major
projects in my daddy’s absence.

Of course, one of those projects
was my first record and Blake’s band, Rust’s new record. They were my daddy’s
pet projects, and Liam, who had managed us on tour, was able to seriously speed
up our record deals. At first, they were saying it would take a couple of
months to cut our albums, but now we're set to hit the recording studio in less
than two weeks.

Before I even realize it, I’m
approaching the exit off the highway, and I veer to the right and then follow
the winding roads that lead to the well-hidden rehab facility. Coming back to
the picturesque area sets off a flurry of emotions inside me and I get out of
the car on shaky legs.

I walk up the tree-lined path and
then climb the stairs to the beautiful white verandah porch. I gently push the
door open and enter the tranquil facility. There’s an elderly woman at the
front desk, and I approach her, smiling.