Wounds of Honour: Empire I 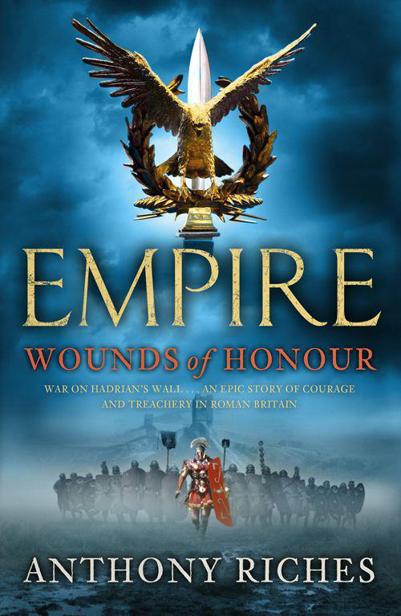 ‘Dubnus, you’ve said it a dozen times in the last week. I
was
a praetorian officer, but I never saw action, so it was just a ceremonial job … looking good in uniform, knowing what to say to whom … I’m going to need you to help me be a real officer, a warrior leader. What else can I give you in return?’

‘I make you a warrior, you’ll make me a centurion?’

‘Not a warrior. I may yet surprise you in that respect. A warrior
leader
. It’s what I’ll have to achieve if I’m to survive here.

First published in Great Britain in 2009 by Hodder & Stoughton

The right of Anthony Riches to be identified as the Author of the Work has been asserted by him in accordance with the Copyright, Designs and Patents Act 1988.

All rights reserved. No part of this publication may be reproduced, stored in a retrieval system, or transmitted, in any form or by any means without the prior written permission of the publisher, nor be otherwise circulated in any form of binding or cover other than that in which it is published and without a similar condition being imposed on the subsequent purchaser.

A Preview of
ARROWS of FURY

To Helen, for unfailing patience and encouragement.

And above all else, for Silloth.

By far the most important thanks to be offered by the author must go to my immediate family, Helen, John, Katie and Nick. I suspect that much longer faces would have been pulled that ‘summer’ day in 1996 if it had been clear exactly what the proposed visit to Housesteads, the site of
Wounds of Honour’s
‘The Hill’, would mean in terms of my on/off relationship with the manuscript – and therefore to a degree with my loved ones – over the next twelve years.

The guiding influences that led me to put my hands on a word processor with serious intent – even if I wasn’t quite sure what that intent was at the time other than a burning feeling that I could do
that
– were, in chronological order; my mother for my letters and the reading habit; my father for fuelling it with his illuminating military history collection and highly informed, unpatronising debate on each fresh subject as I greedily consumed it; and Michael Elliott-Bateman for teaching me how to read the much more interesting stories hidden between the lines. Lastly, with the writing habit already established, the novels of Stephen Pressfield and (of course) Patrick O’Brian particularly stand out as having provided me with signposts as to the level of quality that would be required of my writing were I to stand any chance of publication. Mr Pressfield in particular, his subject matter so close to my chosen time period and with such remarkable skills, left me staring into space wondering whether I should even continue with my half-formed manuscript on more than one occasion. I credit
Gates of Fire
more than any other single book for influencing my eventual writing style.

In writing
Wounds of Honour
I have been dependent on more sources of information than I can recall, but particular influence has been exercised by Kevan White’s remarkable website,
www.roman-britain.org.
Kevan showed me that the dry Latin place names we ascribe to the forts on Hadrian’s Wall – and so many other places – hide so much from our understanding what made the Romans tick, essentially and unsurprisingly, like any other human society. The second that Brocolitia (Carrawburgh) became ‘Badger Holes’ (the literal translation from the Latin) in my head, a good deal else changed in my view of the Wall’s occupiers. Kevan’s website is an excellent source of information of all sorts with regard to Hadrian’s Wall and its occupiers. Any reader with the curiosity to delve behind my necessarily light touch with the wealth of information available on this period in British history could do no better than to start here.

I haven’t been an academic for over twenty-five years now, and so my contacts with academia have necessarily been limited, but I must single out for thanks Dr Simon James of Leicester University for his help in understanding the dominant land use patterns along the Wall in the late second century.

Lastly, when it comes to thanking those involved in getting the manuscript out of its long hibernation on my succession of memory sticks, several people have been instrumental. For those fateful words ‘my book’s doing well’ one cold and windy night in a Belfast security office, and for his unselfish encouragement of a fellow author, Gerry Tate, author of
Cappawhite,
deserves special thanks. Buy his book! Daniel Kelly and John Mahon were both encouraging at a time when I was just starting to let people see what I’d been nurturing for so long, and both offered honest and constructive criticism that boosted my confidence in the idea of trying to get it published.

Pivotally, Robin Wade of Wade and Doherty Literary Agency saw enough in the script to have a go at selling it on my behalf, and Carolyn Caughey at Hodder and Stoughton saw enough to want to put it in front of paying readers. I am extraordinarily grateful to both of them. Their acceptance of the script for representation and then publication were revelatory moments for me.

Without all these influences, sources, critics and publishing professionals there would be no
Wounds of Honour
, nor the stories to follow in the
Empire
series as Marcus Valerius Aquila takes his fight for survival and revenge across the length and breadth of Emperor Commodus’ imperium. To all mentioned, and to those I have omitted for reasons of space, for either instilling the idea of publication or for helping to make it happen, my heartfelt thanks. 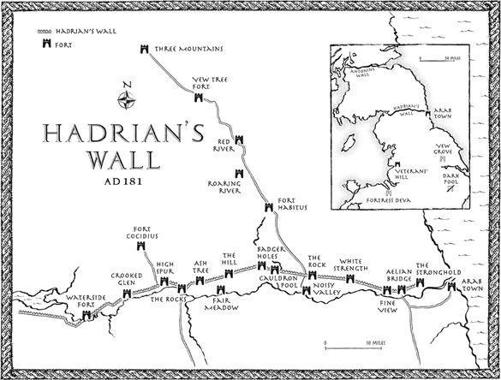 A brisk autumnal breeze stirred the leaves lining the forest floor, the sharp gust lifting a handful of discarded foliage into a brief dancing spiral before leaving it to flutter its way back to the ground. Padding softly over the shadow-dappled ground, a small hunting party advanced slowly out of the forest’s gloom with spears held ready to throw. The men stepped with deliberate care, each foot lifted slowly and placed back on to the leafy carpet with smooth delicacy. Their movements were unconsciously coordinated, each man obviously familiar with his fellows’ actions from long practice. Calgus, tribal leader of the Selgovae and undisputed ruler of the free northern tribes, was doing what he usually did to relax when he wasn’t roaming the lands north of the Roman wall, pushing forward his preparations for the coming war. Accompanied by his five-man bodyguard, Calgus was hunting wild boar.

While his rule of the land to the north of the Roman wall that split Britannia into two halves was absolute, by right of both blood and simple domination of the other tribal leaders, the presence of his closest protectors was an obvious necessity. With a brooding imperial presence barely fifty miles to the south, it was prudent to assume the worst even in something as simple as a day’s hunting.

‘The pigs seem to have our scent, my lord, either that or something else has put them to fright.’

The speaker spat his disgust into the leaves. Another man, stepping softly across the leafy ground beyond him, nodded, keeping his eyes fixed to their front.

‘Aye. If this carries on we’ll be reduced to roasting hedgehogs.’

Calgus chuckled softly, hefting his spear as if rediscovering its balance.

‘You know the rules, Fael. We eat only what we kill in open hunt. If you want to put meat on the fire this evening then keep your wits about you and your spear ready to throw. You might offer a prayer to Cocidius while you’re at it. Pray for a big stag to wander our way. And you, Caes, for all that the local animal population isn’t jumping on to your pigsticker, you wouldn’t want to be anywhere else on a fine crisp day like this, now, would you?’

Caes grimaced, making a stabbing motion with his spear to emphasise his point.

‘I’d rather be hunting Romans, my lord.’

Fael smiled across at Calgus, raising his eyebrows into his ‘here we go again’ face. They were used to the bodyguard’s bloodthirsty hatred of their former overlords. Calgus winked at him before speaking, taking his eyes off the surrounding forest for a moment.

‘Yes, Caes, as you never tire of telling us. When we finally get the tribes to go to war with them I’ll free you from this tiresome duty and put you in the front rank of the warband, give you the chance to swing an axe with the other champions and …’

Caes, turning to reply with a wry smile, lurched backwards with the sudden impact of a hunting arrow which punched its vicious barbed-iron head into his chest with a sound like a spear driven hard into a boar’s ribs. He stared down stupidly at the arrow’s protruding shaft for a moment before dropping first to his knees, then on to all fours. Beyond him, Fael toppled backwards into the leaves with an arrow through his throat, a bright fan of blood spraying across the forest floor.

Calgus turned back to his front and hefted his spear, aware that he was hugely vulnerable whether he fought or ran. The hidden archers loosed another pair of arrows into the men to his left while the remaining bodyguards were still looking for targets for their own spears. His last companion fell as he bounded forward to defend his king, his spear arcing uselessly into the trees in a last desperate throw as he went down with a pair of arrows in his chest. The king waited for a long moment for his turn to come, bracing for the arrows’ impact, but none came. Thrusting his spear defiantly into the soft earth, he drew his sword, the scrape of metal loud in the sudden silence. He called out into the forest’s deadening gloom, lifting the weapon into a fighting stance.