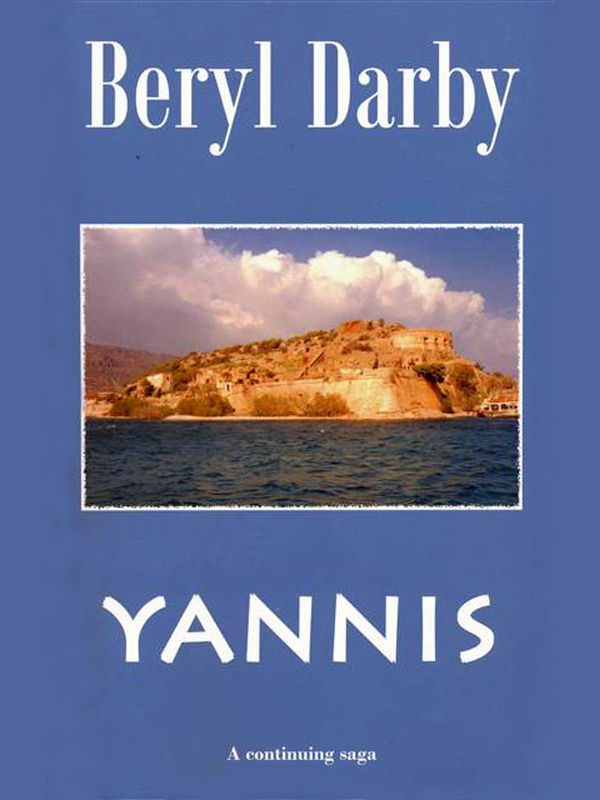 Titles available in this series

Beryl Darby has asserted her right under the Copyright, Designs and Patents Act, 1988, to be identified as the author of this work.

No part of this publication may be reproduced without prior written permission of the publisher.

For Fayne, for his fortieth birthday

This is the story of Greek sufferers from Hansen’s Disease (leprosy). All the events that took place in the Athenian hospital and on Spinalonga are true.

There was never any suspicion of embezzlement of Hospital Funds in Heraklion, and all the characters in this novel are entirely fictitious. Any resemblance to actual persons, living or dead, is entirely coincidental.

My thanks to Anita Darby who found a sufferer who had been sent to Spinalonga as a young man. His information and reminiscences were invaluable to me.

Yannis pulled his roll-neck jumper a little higher to hide the slight swelling on the side of his neck. His throat hurt, but he did not want to worry his mother. The next baby was due at any time and the last few weeks had not been easy for her.

It was hot in the fields, but Yannis refused to remove his jumper, although his father had removed his jacket and rolled his sleeves above the elbow. He felt cold and shivery and wanted to lie down and sleep, but his father urged him to hurry. Rain was threatening and he wanted to get the grass stored whilst it was still dry. Patiently the donkey allowed Yannis to pile the grass higher and higher on her back until he could no longer reach.

Yannis eased the neck of his jumper with fingers stained by the grass and earth. The first finger of his left hand oozed a small amount of blood where he had cut it on a small glass bottle he had found. He had never seen a bottle like it before, coloured deep blue with swirls of yellow decorating it from the base to the lip. He sucked his finger a couple of times, then forgot it as he collected together the pieces of broken pottery he had found. ‘I’ve finished, Pappa.’

Yannis took the rope, which was both leading rein and tether for the donkey and urged her towards the track that led to the village. Slowly they plodded homeward. Only a few yards from the main street the rain began to fall, large drops, wetting their clothes and trickling down their necks. Yannis’s father took the donkey’s rope from him, under the impression that the animal would move faster under his controlling hand. With the heavy, unwieldy load of grass the donkey continued at the same sedate pace, only quickening almost imperceptibly as the farm buildings came into view.

His mother straightened up from the oven as they entered the kitchen. Yannis saw the wince of pain on her face and her hand went involuntarily to her bulging stomach.

‘Best go for the Widow,’ Yannis’s father spoke softly. None of the fear that he felt for the safe delivery of his wife and child was communicated to the boy. Yannis nodded and without a word left the house to run the length of the village street. The rain was harder now and he was glad he had not yet changed into dry clothes.

Yannis knocked and opened the door of the old lady’s cottage at the same time. Widow Segouri looked up. Her nose had a slight Semitic hook, dressed all in black; she looked more like a witch than a competent, but untrained midwife.

‘What’s the hurry, Yannis?’ Her voice was soft and composed.

Widow Segouri rose reluctantly from her chair. She thrust her feet into a pair of stout wooden clogs and placed her shawl around her shoulders. From inside a dark cupboard she took a reel of thread and a pair of scissors and slipped them inside a pocket in her voluminous skirt. She looked outside and shrugged; the rain showed no sign of abating. A fifth child and Maria did not take her time like some women.

Slowly they walked back along the street. Yannis could feel the eyes of the villagers watching their progress. By evening there would be callers to ask after the mother and child. If the news were bad, Widow Segouri would spread the word on her return journey. Then the villagers would come in black, to weep and wail to express their sorrow. Yannis had seen that happen once before. He remembered shivering at the shrill keening of the women as they had sat by a neighbour’s bed when she had lost her child.

Yannis pushed open the front door to the house. In the main room sat his two younger sisters, their eyes round and wondering. The older girl, called Maria after her mother, had five-year-old Yiorgo on her lap and was rocking him gently.

‘Upstairs, all of you,’ ordered the Widow and silently the children obeyed. Yannis stood in the communal bedroom, cold, tired and hungry. It would be hours before his mother could attend to them and his father had forgotten their existence.

‘I’ll get some soup,’ he said to Maria and crept back down the stairs. He cast a surreptitious glance towards the high bed that stood in the corner of the living room, hurriedly averting his eyes from his mother’s naked legs.

Yannis lifted the pot of warm soup from the embers of the fire and tucked a loaf of bread beneath his arm. Yannis senior looked at his son and was about to order him out of the room when he realised the errand he was carrying out.

The children dipped the bread into the soup as they sat on the floor eating hungrily. Yannis shivered. He must change his clothes. He stripped off the sodden pullover and trousers. As he pulled the dry jumper over his head he was conscious once again of the small lump just below his ear. His finger was bleeding slightly again, so he stuck it in his mouth whilst he watched Anna tickling Yiorgo. Vaguely he wondered if he would have a brother or sister. It did not matter very much. Babies were all the same.

It seemed an eternity before their father called to them, relief and pride in his voice. ‘Children, come and see your brother.’

Silently the children returned to the living room and gazed at the small, crumpled face in their mother’s arms. The tiny forehead puckered and the eyes screwed tighter, sensing the presence of more people.

‘Stelios,’ his father said firmly and his mother smiled in agreement. Yiorgo stretched out his arms to his mother and Yannis placed him on the high bed beside her where he grabbed at the baby, anxious to investigate this new source of interest.

Maria nodded. ‘All I want to do is sleep.’ It was a signal for their dismissal. Yannis picked Yiorgo up from the bed and set him on his feet.

‘Yannis!’ His mother’s voice was sharp. ‘You haven’t washed.’

Yannis looked sheepishly at her. ‘I’m sorry. I forgot.’

He walked out into the yard and worked the pump, ducking his face quickly beneath the gushing water before rubbing his hands to remove the grime from the fields. He returned to the kitchen and rubbed himself dry on a rough towel. ‘I’m going to bed,’ he announced.

‘Ask Maria to see to Yiorgo,’ his mother spoke sleepily and Yannis nodded.

Yannis senior looked at his oldest son. ‘Look after them, Yannis. I’m going out for a while.’ Yannis senior looked very different from the man who had returned from the fields a few hours earlier. In place of the old trousers and check shirt with a torn sleeve he had donned a white shirt and his Sunday suit of black. It was a little tight, he had put on some weight since he had first bought it, some eleven years ago for his wedding, but it was still his best and only suit. He had a family to be proud of, and now he planned to visit the taverna and spread the news of his latest addition.

Once upstairs Yannis looked at the tiny room. Soon there would have to be another bed. Maybe he and Yiorgo would share a mattress, as did the girls. Anna wriggled down beneath her blanket, leaving room for Maria. Yannis placed Yiorgo on his small pallet in the corner and covered him before pulling across the curtain, which divided the room and gave him a modicum of privacy.

Yannis lay beneath his blanket. His throat felt raw, his head throbbed and his ears began to ache. He fell into a restless sleep full of dreams. He was cutting grass, picking carob, loading the donkey, all the time hot and sweaty and his father would not let him rest or take a drink. He wanted a drink so much. He turned to run to where the water was stored away from the heat of the sun, only to find a beggar standing there, staring at him with pain-filled eyes. Yannis screamed.

Maria was awake in a moment. ‘Yannis? What is it?’

‘I had a dream.’ He realised his voice was almost a sob. His throat felt as though it had closed. ‘I need a drink,’ he whispered hoarsely. He groped his way downstairs, helped by the dim light of the oil-lamp in the living room.

‘A drink,’ mumbled Yannis, and continued on his way to the kitchen.

Yannis swallowed the water, which did little to ease the burning sensation in his throat, and went obediently to her bed. His mother ruffled his hair affectionately.

‘Your hair’s all wet! I thought you went for a drink, not a bath.’

Yannis tried to smile. He shivered and his mother touched his forehead. ‘You’re like a fire. Here, let me look at you.’ She noted the flushed skin and over-bright eyes. ‘You’ve got a temperature. Not changing those wet clothes quickly enough. Back to bed with you.’

Yannis escaped thankfully. His legs felt weak. He crawled back onto his mattress and resorted to the childish habit of sucking his fingers for comfort.

Sunlight filtered through the bedroom window, the rays falling on Maria’s face. She stirred slightly, refusing to accept that morning had arrived. The rays extended their fingers to touch Anna who rubbed her eyes and sat up.

Maria grunted and opened a sleepy eye. Yiorgo was still asleep. She could dress and wash herself and perhaps see her mother for a moment before he started demanding attention. She slid off the mattress, followed by a bouncing Anna. Anna did not stop to dress, but clambered down the stairs to her mother. She peered at the wizened face of the baby, regarding him quizzically, her head on one side. She was still watching him as her mother woke.

Hittin' It Out the Park by Allison Hobbs
I know you got soul: machines with that certain something by Jeremy Clarkson
Roping The Virgin (Cowboys & Virgins #2) by Riley,Alexa
Wartorn: Resurrection by Robert Asprin, Eric Del Carlo
The One a Month Man by Michael Litchfield
His Princess in the Making by Melissa James
His by Brenda Rothert
The Doll Shop Downstairs by Yona Zeldis McDonough
The Stolen Bones by Carolyn Keene
Defiant Unto Death by David Gilman