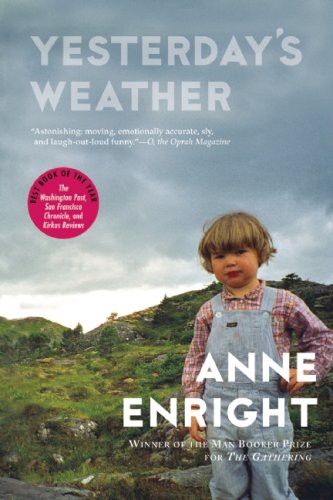 “Enright has been rightfully praised for her imaginative and stylistic powers. She is more than a gifted technician, however. She shows her readers how opportunities for grace emerge from the humdrum details and obsessive crises that make up our lives, and as such, she is one of the most distinctive and necessary authors writing today.”

“A remarkable, stirring collection … dizzyingly good…. Enright is a singular talent…. [She] writes powerfully of deeply held emotions, of thoughts and opinions that are oftentimes denied even by those who have them.”

“Enright’s gift is not just in the way she can look without flinching at the places most people prefer to turn away from, but also in her feel for language, for an image so stark and striking that you carry it with you.”

“Some of the richest, most emotionally resonant passages you’re likely to find in any recent collection.”

“A powerful book from a writer who speaks plainly and knows that hardly anything is quite as it seems.”

“Enright infuses the quotidian with grace and humour, [and] it is her honesty while describing the shock that accompanies great loss that sets her apart as a writer.”

“You are drawn in to explore, allured by [the stories’] dark brilliance.”

“Her sentences have rhythm and snap. She’s tough. Honest. Never sentimental, but sometimes tender…. [The stories are] as intense and evocative as poems. They should be savored like poems, slowly, a few at a time.”

The Portable Virgin
The Wig My Father Wore
What Are You Like?
The Pleasure of Eliza Lynch
The Gathering

Until the Girl Died

In the Bed Department

Pale Hands I Loved, Beside the Shalimar

The House of the Architect’s Love Story

(She Owns) Every Thing

Luck Be a Lady

For Theo and Eileen Dombrowski

This collection brings together stories written over the course of nineteen years. It includes all of
Taking Pictures
(Cape 2008), much of
The Portable Virgin
(Secker 1991), and two stories from Faber’s
First Fictions: Introduction 10
, which was my first outing into print in 1989.

The stories are presented here in reverse chronological order, partly, it has to be said, for the comic effect. I may be the only one who is laughing, but it is a great and private joke to see myself getting younger – shedding pounds and wrinkles, gaining in innocence and affectation – as the pages turn. The stories have been very lightly edited, not because I did not want to rewrite them, but because I found that I could not. It is impossible to inhabit a former self. You can not be the writer you were in 1989, nor, in a funny way, would you want to be. Still, there is much to regret – the fact that the creative moment is not one that can be repeated, is both a wonderful and a melancholy one. The path your words make as you herd them across the page is the only viable route, after all.

Working on the stories, I was surprised by the pity I felt for my younger self – so assured and so miserable at the same time. The best kind of misery, of course – spiky, artistic, fullhearted – but still, it does make you blunder around a bit.

The irony is that so much of my early work is spent discussing the woes of middle age. I got most of them wrong. I didn’t imagine the many insults to your vanity that age brings, nor could I foresee the sense of urgency you get as the years go by, like typing faster before you hit the end of the page. No, I thought the most terrible thing about middle age would be marriage, in all its loneliness and hypocrisy. And I suppose marriage can be both of these things, but I have also discovered that these kinds of emotion are beside the point: the whole business has been been one of unexpected happiness, for me. Worst of all, the women in my early stories have children and say that the experience has not changed them. How wrong can you be?

It is interesting, but only in a sociological way, to see the sympathy two of my narrators have for men who have just lost their virginity. It is odd, but only to me, to read of the bitterness that exists between female friends, when my own girlfriends are so generous and important to me. These stories are not written by the person who has lived my life and made the best of it, they are written by people I might have been but decided against. They are written by women who take a different turn in the road. They are the shed skins of the snake.

None of this matters – my life, and how it is reflected or distorted in the stories here. I discovered, when I started to look at them again, that I had forgotten the content of some of these pieces. What I remembered, with great clarity, was their shape. I knew whereabouts on the page the thing shifted; I remembered the moment it stumbled or lurched toward an ending. I could turn it around in my head – almost in three dimensions. The stories played like music for me; the way music can give you a sense of space.

What I seem to be saying – a little to my own surprise – is that the person may change, but the writer endures. The writer wants a thing to be well made, because a well-made thing is a gift. This gift is presented not just to the reader, but also to the future – in my case, to an old woman called Anne Enright, who will read this too, with a bit of luck, and laugh.

Well, what was that to me? The girl died. And it was nothing to do with us, with either of us. She died the stupid way that people do – in a car crash, in Italy. Where, presumably, she was driving on the wrong side of the road.

If the girl had not died then she would not have mattered in the slightest. She would have been a lapse; my husband is prone to lapses – less often of late, but yes, once every couple of years he does lapse, after the office party say, or travelling on business. I don’t think he visits prostitutes – I mean, some men do, some men must. Or quite a lot of men must, actually – but my husband doesn’t. And I know, I know, I would say that, but …

I’ve thought about this a lot over the years; things catch my eye in articles, in magazines. I have wondered, What makes them go and what makes them stay, what do they want, men? It’s the great mystery, isn’t it? What men ‘want.’ And the damage they might do to get it.

The things you read in the papers.

But they’re not. They have their reasons and they have their limits. They have hearts, too. And I can say, without a shadow of a doubt, that my husband is not the kind of man to buy sex in the street. He likes intimacy. That is what he craves. My husband is the kind of man who will always look you in the eye. He loves women – even older ones. He loves to talk to them, and make them feel good, and he loves to kiss them, and be a little dangerous; he loves the melancholy of all that, it makes him feel so young. And he also loves me.

He is not a bastard, that is what I am saying. I am saying that he is a fantastic man. My husband is a fantastic man. And until the girl died, beetling along in her little Renault Clio on the wrong side of a road in Tuscany, until the girl died, that was enough for me. To be married to a fantastic man who loved me, and was prone, once in a long while, to a little lapse and a lot of Catholic guilt about it. Oh, the bloody bunch of flowers and the new coat in Richard Alan’s sale. Isn’t it worth it? I used to say. Isn’t it bloody worth it for a trip to Brown Thomas’s and a long weekend with the kids, all of us together in Ballybunion, walking the winter beach, a couple of bottles of wine and more conjugal antics than is decent at our age, with my wonderful husband, home again after his little lapse; some overambitious young one who will Shortly. Be. Fired. Thank you darling and, no, I know you will never do it again.

He works hard, my husband. And I have always been a great asset to him. And we are ordinary people. And I am proud of that too.

It is quite an ordinary name, I say it fifteen times a day. Mind you, he never calls me anything back. Isn’t that the way of it? What do men call their wives. ‘Em …’ Like every woman on the planet was christened Emily.

The girl was called – listen to this – Samantha.

And she was only called ‘Samantha’ because she died. If it hadn’t been for the car crash she would have been, and always remained, that young one in IT, or even that slapper over in IT. O’Connell Street might be full of slappers, but if one of them slaps off, pissed, in her mini skirt and high heels, and gets herself run over, then she’s – what? – she’s a fine young woman, who liked to wear white.

Of course, I didn’t have a clue.

He came home – when I think about it, it must have been the day he’d heard the news – and he sat in the sofa, and for the first time since his mother’s funeral, I saw him cry. The children saw him cry. I had no idea what he was crying for. I felt like calling an ambulance. Then I put two and two together and realised he must be lapsing again, he must be mid-lapse. And I panicked.

I know that. I did panic. And it’s not like me. He lifted his head to speak to me and I said,

‘I don’t want to know.’ That was all. ‘I don’t want to know.’ And I said it really fast, like I was talking off the record, here. Like what was happening was not actually happening. Or he’d better make bloody sure it wasn’t happening because I wasn’t having the mess of it all over my beautiful, hard-won house. And he pushed his face around to clear away the tears – not hot tears, not outraged, grief-stricken tears, just that leaky, worn-out water you find on your face sometimes, when you are sick or defeated – he wiped the tears away and then he just sat.

The first time it happened, at a guess, was when the children were small. I was up to my tonsils in nappies and mayhem, falling asleep before my head hit the pillow, fat as a fool. Anyway. They feel ‘excluded’, fathers; isn’t that what the articles say? They have the weight of the world on their shoulders, and after a while – I’m convinced of this – they start to resent you, maybe even to hate you. Then, one day, they love you madly again and you realise – slowly, you realise – that they have been up to something. They’ve had a fright. They’ve come running back home.