You Both (Vampire Assassin League Book 29) 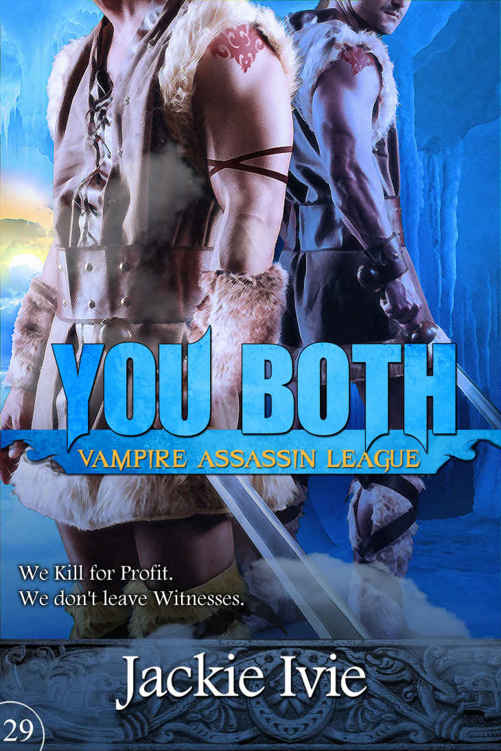 “We Kill for Profit”

This book is licensed for your personal enjoyment only. All rights reserved, including the right to reproduce this book, or portion thereof, in any form. This book may not be resold or uploaded for distribution to others.

This is a work of fiction. Any references to historical events, real people, or real locales are used fictitiously. Other names, characters, places and incidents are the product of the author’s imagination, and any resemblance to actual events, locales or persons, living or dead, is entirely coincidental.

The slightest touch of red light accompanied the incoming call. His personal line. Used with utmost discretion. Or emergencies. Akron didn’t hesitate. He swiveled in his chair and pressed the connect link. “VAL headquarters,” he answered.

“Is this the Vampire Assassin League?”

“Who is asking please?”

“You have one minute,-nine seconds, Miss Bowker.”

“This conversation ends, as well as any tracing efforts.”

“But I have permission to use this number!”

“Really? Then I suggest you use it.”

“You have fifty-five seconds left now.”

“I need to ask some questions, and you’re making it difficult.”

“Really? In that event, I suggest you ask them rather than waste valuable time.”

“Okay. Thanks. You’re a vampire, right?”

“I’m really getting annoyed with you, Mr. Akron.”

“I am not the one who called, Miss Bowker. You now have forty-two seconds. Your next question?”

“All right. Let’s just assume – for my article – that you’re a vampire. And you run an organization of vampires, and they’re assassins, and they kill people and drink blood…”

“An interview? I don’t recall agreeing to such a thing.”

“Let’s just say you did and get to the heart of the matter.”

“With pleasure. Hearts are my specialty. What do you wish to know? You do have twenty-two seconds left.”

“Why are vampires so…sexy? So dangerous, and intriguing? So fascinating? Why? Can you just answer that one question?”

“That one is easy, Miss Bowker.”

“You want one word? To describe us?”

“Good-bye, Miss Bowker. And good luck. You should check your locks tonight. The one on your basement window is loose.”

Akron pressed the disconnect button and watched his laptop screen as the call number was erased from existence. With it went the evidence stream of the call. He detested reporters. They were bull-headed. Stubborn. Illogical. Rude. Self-serving. He ranked them just below lawyers for sliminess.

The call was erased, trashed, and the receptacle was then emptied, while megabytes of data rewrote the space on the hard drive where it had just been. The moment that was finished, Akron looked over his screen and focused on the vestibule. Then he smiled and shook his head. Nigel Beethan, his terminally-teenaged, hand-picked second-in-command, was bent forward, whispering into his com-link.

As if Akron couldn’t hear every word.

But Nigel was newly mated. His lady-love was moments away. And that was eternally special. All-important. Love was a supreme power. It was the most potent force in the universe. It easily trumped pesky reporters. Akron cleared his throat. Nigel straightened, blew a kiss into the com-link before disengaging it, and swiveled his chair to face Akron.

Ah. Young love.
It was heartwarming. And the sensation never got old.

“We appear to have a breach.”

The kid was immediately alert and focused. “We do?”

“I’m uncertain of the extent.”

“A reporter just called me.”

“On your private line?”

“How did they bypass the switchboard?”

“Nobody has your numbers except associates.”

“That is extremely bothersome. As is the portion of my information you appear to have missed.”

“I heard it, but since security has been compromised, isn’t that the most important issue?”

“Yes and no. Reporters are notoriously stubborn individuals, Nigel. They consider prying and spying a primary right. They do not recognize boundaries, and have zero respect for private space. They do not recognize the basic rules of engagement in a civilized society. And they do not seem to have any comprehension of the word quit.”

Nigel was silent for a moment. “Sounds like you have experience.”

“You could say that.”

“Your reporter was a lady?”

“Possibly. I’ll reserve judgment, but she was definitely female.”

Akron sighed heavily. “That response sounds a bit...severe, don’t you think? And it has entanglements. There is a price any time we engage humanity, Nigel. It’s like cracking open a window, when we should be sealing them.”

“She’d be pretty much sealed, Sir.”

“She could be working for someone. This might be an assignment. There could be partners involved. An information trail. If a reporter has the kind of incident that you described, that would tend to highlight their last assignment.”

“Got it. What do you suggest?”

“Well. The expected move would be to send one of our associates to engage her; one with a wealth of knowledge, lightning sharp intellect, and a rapier-quick tongue.”

“Hang on. Doing a search. It’s coming up with...Lizbeth. Okay. That’s a given. And then...Count Reynaldo Moreseni? Oh, no. No. Not him. I’m begging here. Wait. Here’s Thoran. Jean-Pierre. Another pirate. And Leonard Griggins? Len? The smart-ass? He has lightning sharp intellect?”

“Don’t look at me. I didn’t compile the data. I use my own instincts in times like these.”

“We should send one of the twins.”

“One of the Icelandic twins?”

“We have another set?”

“I am actually quite serious.”

“Sir, I really need to point out that when I think of wealth of knowledge, lightning sharp intellect, and rapier-quick tongue, neither Ethelstone nor Athlerod come to mind.”

“Allow me to replay what I said. The
expected
move would be to send someone as you described. But, she is a reporter, Nigel. A woman. I can already tell she is sharp. She may like to match wits.”

“Why should we make anything enjoyable for her? Think of the frustration potential. Send one of the Icelanders. I think it will prove endlessly entertaining.”

“Complication possibilities. Together they are much too noticeable. And memorable. Not to mention, destructive. We need to ascertain her source, not engender police complaints.”

“Which one should I send?”

“You are my second-in-command, Nigel. I think you can handle this.”

“Are you certain he’s the right one?”

“Which one is correct?”

“Correct? Hmm. Odd word choice. Makes me wonder why you used it?”

“You have psychic abilities, Nigel. Everyone does. I’m trying to get you to tap into them.”

“Really? Let’s consider. Why did you select Ethelstone first? The name doesn’t roll off the tongue easily. It’s not the first alphabetically.”

“That’s the name that popped into my head.”

“Well...that just could be your psyche talking to you.”

“Nope. I told them to take their wrestling outside.”

“They knocked a support post loose in the great hall. I had to send a construction order.”

“Nigel. We are buried in the mountains of New York.”

“The directive of ‘outside’ encompasses a very large territory. With a lot of humanity.”

“Good plan. And I’ve changed my mind. Send him to the airstrip. He won’t need to fetch Miss Bowker. I’ll handle that task, myself.”

“I can hit the third fellow’s backpack as he leaves the subway tunnel.” Athlerod swung his arm, ready to sling a pebble.

“You?” Ethelstone hooted with laughter. “You cannot hit the broad side of a longhouse. And that’s when standing inside it.”

Ethelstone scooted to the roof edge, sending a flutter of snow sifting down from it. There were perched atop a hotel. Thirty-plus floors above the street level. It was a busy night in Manhattan. Neon signs were lighting every crevice. Headlights illuminated the choked lanes. All kinds of music vied for supremacy. Every form of humanity swarmed about on the streets. It would be a difficult shot to hit anything with accuracy from this distance, especially a backpack.

“What you got to bet?” Ethelstone finally asked.

“Hey. That hoard is half mine.”

“You can’t bet and use my own stuff as collateral.”

“You want to see your
Danegold
again or not?”

“You should have written down where we buried it,” Athlerod stated.

“I didn’t need to! You write everything for us.”

“I know. Because I do not have a disability, like you do.”

“What does that mean?”

“You are impressed? Good. I have been researching online.
Sinistrality
is a medieval term. For being left-handed. They even considered it a bad mark.”

“Proving they are also
rassholes.
It is no disability. It’s a blessing. Want a demonstration to prove it?”

“We arm-wrestle. Left-handed this time.”

“I’d rather wrestle the pipsqueak, Nigel, than a
fenrir.”

“You dare call me an offspring of the god
Loki
?” Ethelstone’s jaw tightened.

“And cast aspersion on our mother?”

“
Our
mother? Oh. Never. My mother was the fairest of Angle-land maidens. A princess. Your mother was a spawn of the primeval cow,
Audhumld.
”

“Take that back, you
pokker!
”

“Wait! We can’t put another hole in this roof! And I’ll miss my shot. And that means you’ll miss your chance to find out where...the
Thorbald
hoard is.”

Ethelstone eased his grip, not due to anything his twin said. It was because the cell phone in his chest pocket vibrated.

“You give up already?” Athlerod teased.

“We are receiving a call. It is probably important.”

Athlerod was at the roof edge peering down. Ethelstone unzipped his leather jacket and snagged the phone. He thumbed the connect button as he shimmied to his brother’s side, dislodging another skiff of snow. He didn’t notice or care. It would dissipate before it reached the street level, and he wasn’t allowing Athlerod to win.

The information wasn’t necessary. Nobody else sounded like the kid. Ethelstone looked upward for a moment, before responding. “
Ja
?” he asked again.

Channel 20 Something by Amy Patrick
DECEPTION vol.1: A promise made A promise broken (Turbulent Desire Series) by Ericka Santana
The Forgotten: Aten's Last Queen by J. Lynn Else
Mia by Kelly, Marie
Blessed by Michael, David
Midu's Magic by Judith Post
Blossom by Andrew Vachss
When Old Men Die by Bill Crider
Tree of Smoke by Denis Johnson
A Suspicion of Strawberries (Scents of Murder Book 1) by Lynette Sowell