Read You Must Be Sisters Online

You Must Be Sisters 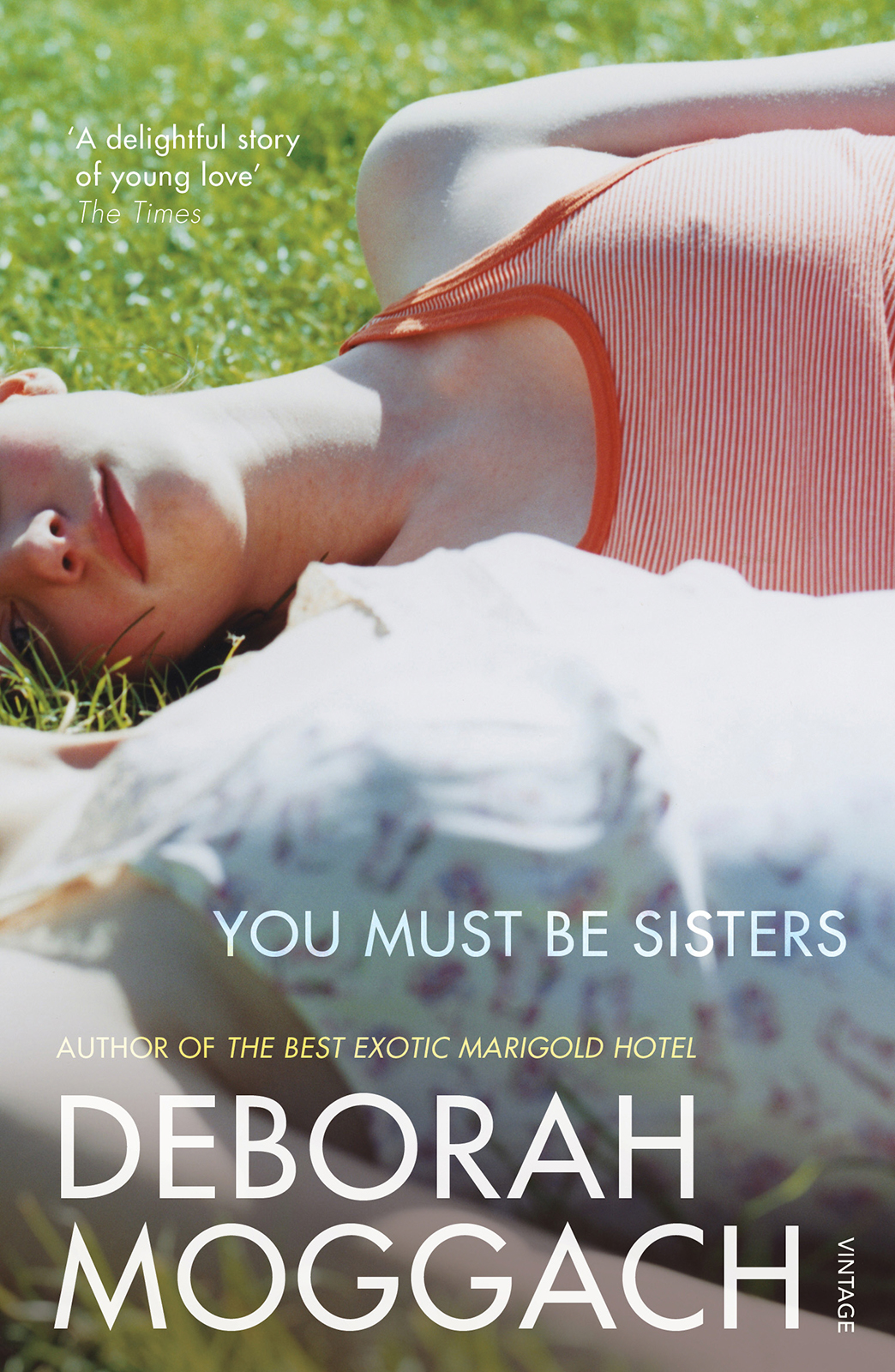 Read on for an extract from
Something to Hide

Deborah Moggach is the author of fifteen novels, including the bestseller
Tulip Fever
, and two collections of short stories. Her TV screenplays include the prize-winning
Goggle-Eyes, Close Relations, Final Demand
and the acclaimed
Love in a Cold Climate
. Her highly praised movie adaptation of
Pride and Prejudice
was released in 2005. She has two more or less grown-up children and lives in North London.

Driving in the Dark

To Have and to Hold

Smile and Other Stories

To my real sisters

You Must
Be Sisters

‘WELL, THAT’S THE
last of our birds flown,’ said Rosemary, who was inclined to say things like this.

Her husband nodded, every muscle tensed to reach, across two roundabouts and a flyover, that large blue motorway sign. He could acknowledge her with a nod but he could hardly listen, what with an avalanche of cars, a thundering landslide of the things, bearing down on his left.

‘Don’t you think it’s, well, rather final, darling?’ she went on. ‘Do you have that feeling too, Dan? Will you miss her?’

Amongst the many things Rosemary had never learnt was a good sense of timing. At times this could be charming, a bright flurry of inconsequence for which Dan, never much of a talker, was grateful. But now he was trying to concentrate. Could this be the wrong blasted flyover?

‘I say, darling.’ A finger pointed. ‘Surely we go down there.’

She was right, of course. EASTBOUND: M4 LONDON. They’d have to double back, else they’d be swept out of Bristol towards some unearthly place like Wales. Rosemary was often right about this sort of thing. Also she beat him rather too often at golf.

At last. EASTBOUND: M4 LONDON. Dan put his foot down and the Rover shot forward.

‘Laura’s so silly,’ Rosemary went on. ‘I do hope she’ll behave herself.’

‘A great one for trying to shock, old Laura was –’ Dan corrected himself ‘– is.’ Suddenly he felt the loss of her. He had a sense of occasion and he knew that this was one. From today she was a university girl.

‘Remember that dreadful young man from the butcher’s?’ sighed Rosemary. She gazed out at the flashing verge. ‘I think she only brought him home to shock us, really. She knew we’d disapprove.’

Dan said nothing, so Rosemary adjusted herself more comfortably and switched on Radio 2. The young man’s voice reassured
her
that nothing too terrible was happening to the world. Equally cheerful music followed. Radio 2 always made her feel better, and one advantage of Laura’s departure was that it could be listened to without a pained silence from the back seat. Laura disapproved of Radio 2.
Ghastly pulp, Mummy. How can you bear it?

Laura was practising her expressions. Just now it was the slow meaningful one; she was good at that. She raised her eyes; she looked at herself with a steady stare, challenging, sensual.

What made it so fascinating was seeing herself doing it from the sides. She’d never had one of these triptych-type mirrors before. By adjusting the three panels, she had a most intriguing view of her profile giving itself its meaningful look. She took a drag of her cigarette and watched the plumes of smoke curling from her nostrils. That looked sophisticated.

She listened. Outside in the corridor she could hear the rustle of coats and the bumping of suitcases. Other girls were arriving. She took another drag of her cigarette; she watched the plumes. No, she wouldn’t talk to them quite yet. They sounded so confident, banging their trunks around, calling out in loud voices. She would practise smiling; see what she looked like from the side. When her lips parted, did her teeth stick out?

She felt safe in here. Already she liked her room: its curtains matching the bedspread; its desk; its enquiring, bending lamp.
How charming!
her mother had said, rings glittering.
Look, darling, its own little cupboard and its own little bed. Aren’t you lucky!

For once Laura had actually agreed. She hadn’t said so, of course; she’d just waited for her parents to go, her mother embarrassing her in front of all those other girls – first by the way she’d insisted on kissing her, second by that awful turquoise hat.

No, she wouldn’t venture out yet. She’d just sit here and pile her hair on top of her head and see what that looked like from the side. Inspect these two new girls on either side of the known, frontal Laura. Interesting to see these two tilted profiles, each so thoroughly examining itself.

On the bed sat her trunk. The last ray of sun slanted through the window; it danced with dust and lit up the folds of her coat which lay draped over the luggage. She knew she ought to unpack
but
– a deeply satisfying feeling, this – who was there to tell her to?

‘Nobody,’ she whispered, her three selves smiling. The whisper hung in the air.

How much nicer just to sit here listening to the thumps against the ceiling and the slamming of doors, and do nothing at all but watch the smoke curl up into her own captured ray of sunshine! She never dared smoke at home – at least, only in her bedroom. It wasn’t actually forbidden; that would have been easy to deal with. It was just tolerated rather painfully. But now she was at Bristol University she could do anything she liked. Right?

Strictly speaking, she did have a room of her own back in Harrow now that Claire had moved out to that flat in Clapham. But how can something be your own when the wallpaper has been chosen by your mother, and whenever she comes through the door her eyes flicker over the bed that you just happen to have left unmade? Stupid how irked that makes one feel. Not guilty, of course, just irked. Her father was even better at the old flickering-eyes routine: for instance, when she ought to be doing her homework and instead he caught her curled up with an Agatha Christie. He’d just flicker, and hesitate, and she would notice; then he’d close the door and go away, and bother, the book would be spoilt.

Laura turned her head slowly, keeping her hair up; she gazed at her profile. Ah! but here there was nothing to stop her doing what she liked, nothing at all.

‘Such wild things,’ Rosemary went on. ‘Silly things, she does. Don’t you think so, Dan?’

Dan gazed ahead at the darkening motorway. Red tail lights, strings of them, led towards London and his daughterless house. ‘Not like Claire,’ he said.

‘Claire’s so sensible, isn’t she. Except teaching at that unspeakable school.’

Dan said nothing, so Rosemary went on: ‘But Laura … she always has to be the rebel, doesn’t she. The one who stands out.’

By now it was dusk; shadows in the room were deepening. Laura still hadn’t quite dared venture out. It was so much easier sitting here at her mirror. But it was chillier now; her arms were gravelly with goose-pimples. And she was becoming uneasily aware that all the noises had stopped. Intent, she listened. What could the time
be
? She didn’t know; she despised watches.

They must have gone down to dinner. Nobody had told her. Despite herself, she felt a homesick lurch in the stomach. First-day-at-school feeling.

She left her room and made her way down to where the dining-block must be. She stood outside the windows and watched them, rows and rows of them, rows and rows of silently chattering students, every one of them a stranger, every one of them eating his dinner and not one of them knowing she was missing. And why should they know? Silly of her to feel hurt that they didn’t. She stepped closer and inspected the tables. They hadn’t reached the pudding course yet; that was a relief. She took a deep breath and went in.

The sudden clatter stunned her and the lights glared in her eyes, so it wasn’t until she had turned around from the serving-hatch with her full plate that she saw, with dreadful clarity, that everyone was wearing black.

She nearly dropped her plate. She’d forgotten about gowns. Hers was still in her trunk.

She stared at them, not daring to move forwards or back. But nobody returned her stare. Nobody seemed to have noticed either her or her gownlessness at all. They were all far too busy talking, all three hundred of them, heads nodding, forks waving, all making her feel so utterly left out. For a moment she actually wanted someone to notice she wasn’t wearing a gown. Most unsettling, the whole thing. Oh to be back in the kitchen at home! Even quarrelling.

She sat down at a table. The person opposite had a commanding nose and shiny black hair. He held a chicken bone in his hand and was in the process of gnawing it. In his black gown he looked sleek and hostile, like a carrion crow. He looked up, shot her a beady glance and bent down again to peck.

Wherever she looked there were faces. She would like to give somebody a meaningful stare, challenging and sensual, but somehow it was easier in her mirror. The best refuge she could find was her plate, so she inspected it thoroughly – chicken, scoops of cemented potato, over-green peas. They disappeared as she ate, so then with the same thoroughness she inspected the scrapings – the tattered chicken bone, the sensible white china of her plate. All the others were new, of course, but why didn’t they look it?

‘Pudding,’ said the crow. She jumped. People were getting up,
fetching
bowls. She got up and fetched one; it quivered with custard. A hammer rapped and voices hushed. With her spoon she stirred her custard skin into its own sunny depths; she listened to the speech of welcome. And now they couldn’t speak, people relaxed and looked around with a general expansion of interest. Laura, too, relaxed a little, felt more included, raised her face and inspected a girl with bold eyes who had pushed her pudding to the side of her plate; someone who was casually scratching under his gown; a square-jawed hearty type who was gazing at the girl with the bold eyes … how assured they all looked! Someone already had his arm around a girl. Good grief, thought Laura, and I haven’t even
talked
to anyone yet. Cosy home rose like a wave. She pushed it down.

It was better back in her own block. Girls tore off their gowns and, thank goodness, looked more approachable; along the corridor they wandered and into her room, inspecting her colour scheme compared with that of their own, introducing themselves. She explored too. The room on one side already looked fragrant and settled, with lace-covered Kleenex box by the bed. On the other side the room was more robust, with a corduroy troll sitting bossily on the bookshelf.

The Kleenex girl had efficiently remembered coffee things and mugs. Her face was white, unused-looking and floury with powder. Already in her bedroom slippers, she padded into Laura’s room and invited her to have a cup.