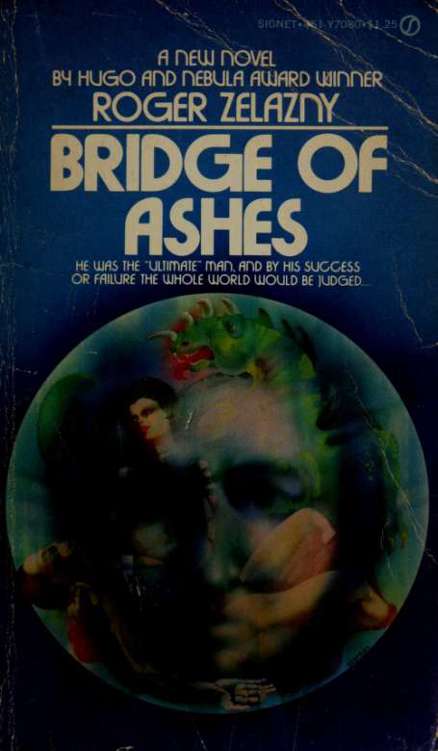 ... Man is moving through the woods. With him
a band of others, hunters all. They are clad in the skins of animals. They bear
sharpened sticks, fire-hardened. Mine is tipped with stone and decorated with a
tracery of lines, inscribed with the point of the flint knife which hangs from
the strip of leather about my—his waist. He wears leaves in his hair, and a
shining object hangs from a thong about his throat. It is a thing of power
which he had brought with him from the land of spirits beneath the sea. He
leads the men in the hunt, raven-haired father's father of them all. His dark
eyes describe the circuit of the beast. Silent, nostrils flaring, the others
walk in his track. The air bears a sometime hint of the salt and the wrack, of
the not-too-distant shores of that great water, mother of us all. He raises his
hand and the men come to a halt.

He gestures again and they draw up on either
side of him, crouching, spreading into a forward-curving arc. Then, once again,
they halt.

He moves. He adjusts his grip on the haft of
his weapon. Then, suddenly, his hands are empty. There comes a roar of pain
from the glade before him. At this, the others rush forward, their spears held
ready. The man draws his knife and follows.

He reaches the wounded beast—fallen and
panting now, three of their shafts protruding from its side—in time to cut its
throat. A cry goes up about him as the quick slashing movement is executed. The
weapons are withdrawn from the carcass. The stealth of the hunt is gone,
replaced by words and laughter. The man moves to dress their prize, dividing
most of the flesh for transport, retaining some for the victory meal which is
now at hand.

The firemaker gathers tinder. Another fetches
him dead limbs for fuel. Someone begins a nonmelodic song, a recitation with a
lilt. The sun pushes its way toward the treetops. Small flowers unfold among
the roots, the rocks, the fallen timber. There comes another whiff of the sea.

As the man skewers chunks of the flesh and
passes these to the firemaker, he pauses for a moment in mid-gesture and rests
his fingertips upon the shining object he wears. It seems a trifle warm to his
touch. The moment passes. He shrugs. He hands the meat to the other. He moves
to cut more.

There comes a sound—a deep, drawn-out hooting,
breaking into a long, rising note which grows into a whistle, passes then
beyond the audible, cuts a wake of vibration, showing that somewhere, strongly,
it persists.

After a time, this subsides and the hooting
begins once more—louder, nearer. It is accompanied by a distant crashing and
crackling, as of the passage of a heavy body amid the shrubs, the trees.

The man places his hands on the ground and
feels the vibrations within it. He rises to his feet.

They obey him, fleeing the kill, the fire,
leaving the man there alone.

When they have departed, the man begins his
retreat from the wood. The notes of the challenge have run through yet another
cycle and the forest still echoes with the sound of their passage.

When the hooting comes again, it is with such
force and volume that it is felt as much as heard. The man hurries toward the
meadow his party had crossed earlier. There had been a rocky knoll in its
midst. ...

He breaks into the open, running toward the
hillock.

From the thunder at his back, he is already aware
that he will be unable to attain a sufficient vantage in time to roll rocks
down upon his pursuer.

He races toward a stony cleft, slips within it
and turns, crouching.

The reflected sunlight dazzles his eyes,
bouncing and dancing on the countless scales of its long, lithe body, flat
tail, crooked limbs, homed head. It plows deep furrows in the meadow as, belly
low, legs splaying, it propels itself with an awful power directly toward him.
Neither sapling nor boulder causes it to swerve from its course. The tree is
splintered, goes down, vanishes beneath it. Its head turns from side to side as
its horns encounter the stone. The boulder begins to move, almost imperceptibly
at first; the stone is rocking, more and more of its damp underside exposed at each
teetering shift; it is cast, rolling off to the left, with a final toss of that
sea-wet thick neck, sun-rich and throbbing with a great new hooting shriek,
blasting dust and gravel before it, continuing the sidewise swimming strokes
which bury each limb in the earth as they drive it on.

The man braces the butt of his spear against
the stone. He searches that blazing body for some flaw, some imperfection, some
weakness. He makes his decision and aligns the point of his weapon. He squints
against the blown dust. His ears ache from that high-pitched cry. He waits.

Moments later, his spear is shattered and the
rocks about him are shaken by the impact. He flattens himself against the rear
of the crevice as a horn drives toward him. The horn stops inches short of his
belly.

Now, it begins to throw its weight from side
to side, spatulate legs continuing their paddlelike movement, body ringing like
a great bell each time that it strikes against the stone. The man smells the
dried brine upon its armored hide. He is nearly deafened by the new cry it
emits. He stabs at its tossing head, but his flint blade is broken in his hand.
He feels the rocks shudder again. He clutches at his amulet, now burning hot
upon his breast.

The next thrust penetrates his side, and we
scream as we are impaled and lifted—thrown....

Pain and breaking. Blackness and pain.
Blackness. Light. Has the sun moved higher? We are wet with our own bright
blood. The beast is gone. We are going. Here, alone, among the grasses ...
Insects circle us, walk upon us, drink of us. A jagged mount of bone has risen
from the continent of my body, snow-capped.... I—

The man awakens to the sound of their wailing.
They have returned to him, his children. They have brought her with them, and
she cradles his head in her lap, weeping. She has strewn him with herbs and
flowers and wrapped him in a bright garment. He smiles to her and she touches
his brow. His amulet has grown cold. His awareness begins to fade once more. He
closes his eyes, and above him she begins to sing the long lament. At this, the
others turn and move away, leaving them there alone. There is love. We—

There is a flash of blue, a circle of white.
..

The beast has returned to its place.

And of self the—

... Drawing is the man in the damp sand.
Power. His eye the binder of angles. His I— Opposite and adjacent, of course.
Where the line cuts them. At hand, the sea forms green steps and trellises, gentle,
beneath the warm blue sky; gentle and unnoticed, as he scribes the circle. For
seventy-some years has he known the sea near
Syracuse
, here in
Sicily
. He had never been far from this sea, even
in the days of his studies in
Alexandria
. It is not surprising then that he can
ignore its wash, splash, spray, its plays of light and color. Clean sea, living
sea, a touch of deafness and a totality of concentration, and the sea is as
distant and abstract as all the grains of sand he reckoned to fill the universe,
displaced about all bodies within it in accordance with the law he had
determined in the matter of the purity of the King's crown, that day he ran
naked from his bath shouting he had found it.... The sea and the sigh of the
sea at the side of the sea ... Now, now very few things matter but the
relationships between forms. The pulleys, the pumps, the levers, all of them
clever and useful in their time. But
Syracuse
has fallen. Too many Romans this time even
for the mirror-trick. And does it really matter? The ideas outlive their
embodiments. The ingenious devices were only toys, really, flitting shadows of
the principles he had cast for with nets of thought. Now, now ... This one ...
If a relationship between things, between events, could be expressed in a great
number of small steps . . . How many? Many . . . ? Few . . . ? Any. Any number
desired. And if there were a boundary of some sort... Yes. A ... A limit. Yes.
Then up to that point, any number of steps ... As we had done with it and the
polygons. Only now let us take it a step further. . . .

He does not see the shadow of the man on the
sand to his left. The thoughts, the deafness, the promise of the Roman
commander Marcellus that he would not be harmed ... He does not see, he does
not hear the question. Again. Look up, old man! We must answer! The blade comes
out of the scabbard, and again there are words. Respond! Respond! He traces
another circle, idly, thinking the steps of change within limits, groping for
the new vocabulary its expression will require—

My eyes fall upon that final circle. There is
a soft blue all about it. Not of the sea, the sky... There is—

I, Flavius Claudius Julianus, he thinks,
pacifier of Gaul, Emperor of Rome, last defender of the old gods, pass now as
they have passed. Pity, Lord of the lightnings, and thou, shaker of the earth
and tamer of horses, and thou, lady of the grain fields, and thou, thou ... all
ye other lords and ladies of high
Olympus
..
. pity, pity, pity that I could not have served you better, oh lovers and
holders of the world and its trees and grasses and wet holy places, and all
things fleet and crawling, flying and burrowing, all that move, breathe, touch,
sing and cry I could have served you better had I stayed at Ctesiphon, laying
siege to that great city, than cross the Tigris to seek King Sapor in this
waste. For here I die. This wounding's mortal, and all the Persian army rings
us round. Hot, dry, desolate land . . . Fitting. A place like this perhaps,
where the Galilean went to be tempted ... Is this irony necessary, new Lord?
You have wrested the earth from its keepers to throw it away.... It is another
world you claim to lead them to.. .. You care no more for the green, the brown,
the gold, the glades, the glens, than this dry, hot place of rock and sand ...
and of death. What is death to you? A gateway ... To me it is more than my end,
for I have failed. . . . You slay me as the children of
Constantine
took my kin.... For yours this may be a
gateway, for me it is the end.... I see where my blood pools.... I give it to
the Earth— Gaea, old mother. ... I have fought and I have finished Old ones, I
am thine—