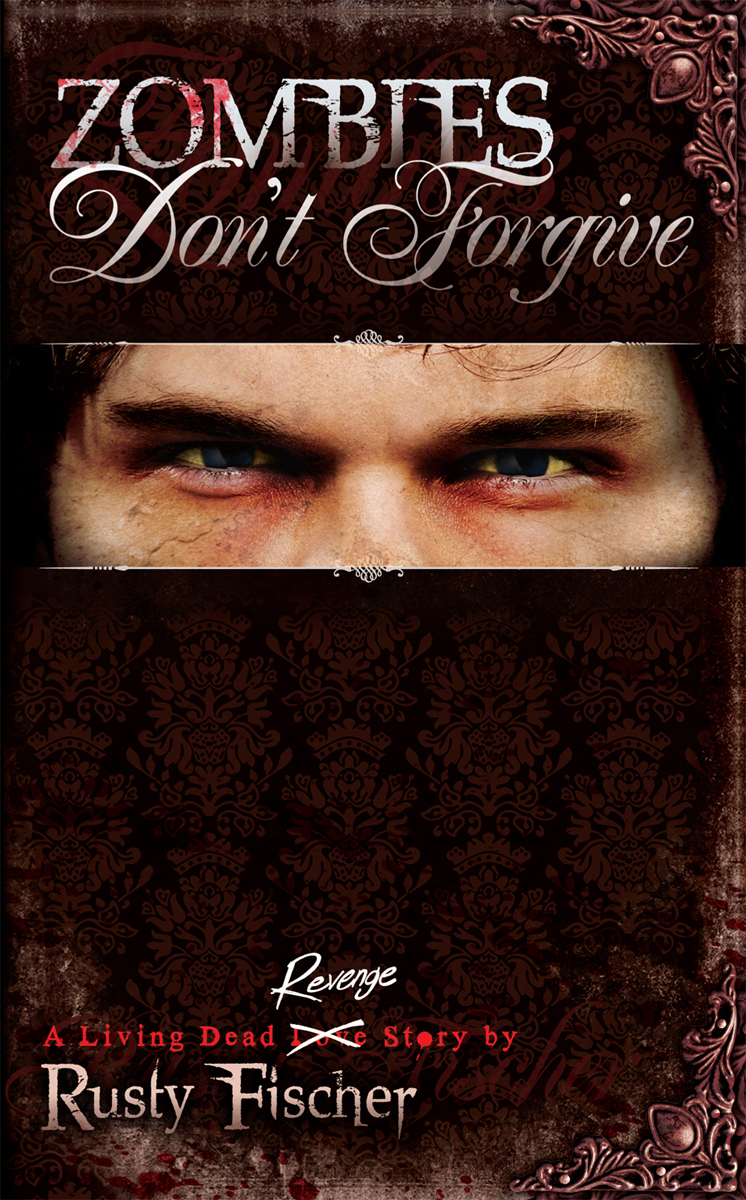 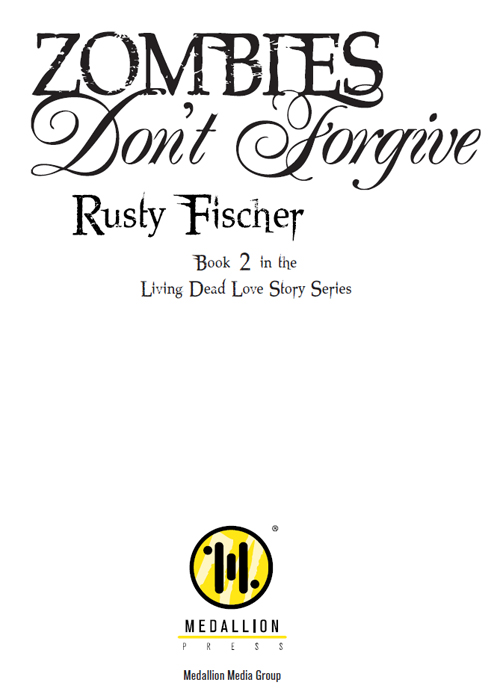 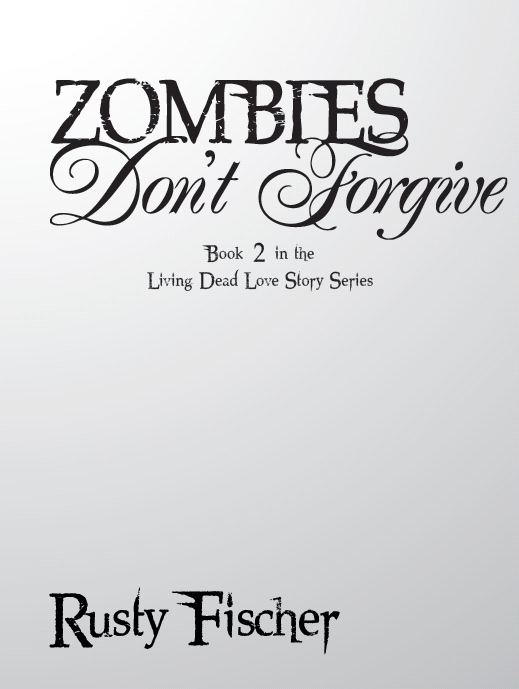 To Martha, as always, who taught me how to believe in my dreams, even if they shuffled along and ate brains for breakfast!

is a registered trademark of Medallion Press, Inc.

All rights reserved. No part of this book may be reproduced or transmitted in any form or by any electronic or mechanical means, including photocopying, recording, or by any information storage and retrieval system, without written permission of the publisher, except where permitted by law.

Names, characters, places, and incidents are the products of the author's imagination or are used fictionally. Any resemblance to actual events, locales, or persons, living or dead, is entirely coincidental.

This book would not have been possible without the support of the many, many (surprisingly many, actually) bloggers, reviewers, librarians, teens, and fellow authors out there who spread the word as its predecessor,
Zombies Don't Cry,
was birthed into this world in April of 2011.

I have been constantly, utterly, and gratefully amazed by the support and enthusiasm of you fine folks and wanted to thank you allâyou know who you areâfor asking for a sequel.

You know what they say: Be careful what you wish for!

Prologue
Making Up Is Hard to Do

6
This Isn't as Fun as It Looks

7
Breaking In, Freaking Out

10
Do Those Brains Come with Sprinkles?

11
Where the Cemeteries Have No Name

13
Nightclub of the Living Dead

18
Zerker Runs in the Family

19
A Black Belt in Bitchery

25
Back in Barracuda Bay

27
Cabana Charly's and the Eternal Tan

Epilogue
All in the Family

Prologue
Making Up Is Hard to Do

I strain against the ancient leather straps that bind my throat, my wrists, my ankles. I clutch a short piece of wire I've stripped from the rusty bed-springs poking into my back.

The monster groans as it shuffles in giant shoes and short pants, its hideous white ankles draped in drooping black dress socks: the Living Dead Businessman from Hell.

He peers not into my eyes but at my throat: raw, exposed, and long-since dead.

I squirm, fiddling with the stiff wire until it slides into the rusty padlock at my side and, with a quiet click, announces my freedom.

With my hands loose, I quickly unlock the bonds at my throat and ankles. I slide off the creaking mattress just as Frankenstein Jr. reaches me. He growls, louder now, swinging his long arms, licking his headstone-yellow teeth.

I laugh as I inch toward the front door. Its frosted window says Laboratory backward in peeling big block letters.

I easily pick the old-fashioned brass lock and swing the door open just in time to feel hands around my neck. I stumble back, escaping the weak grasp. Now what?

In the room are two shuffling creatures. One is tall and looming. The other is my height but hulky. Both are hell-bent on my ultimate destruction.

Frantically I search the shelves and tables lining the back wall of the ancient lab. All I find are rows and rows of dusty, odd-shaped beakers and flasks locked away. I need some type of weapon.

Meanwhile two pairs of giant feet straggle in my direction. I peer back to see the pursuers' mouths agape. Their teeth are broken. Their hands are outstretched.

I hold up my quivering piece of rusty wire. It's pitiful in the light of day. It's harmless, except to this 100-year-old padlock in front of me. The lock clatters down, and I reach for the nearest beaker,
dropping it. I pivot on one bare foot and watch it shatter to the floor. The liquid hisses and spits smoke. I'm engulfed in a whirl of thick fog and â¦

The lights go up, the small midday crowd roars its approval, and on either side of me Stamp and Dane doff their ghoulish Frankenstein Jr. masks. The guys bow dramatically and wink at the family of chubby English tourists sitting in the front row.

The ushers hand out our cheesy black-and-white head shots, and we autograph a few. The three of us in costume mug for the cameras.

The last of the crowd file out of the small, musty auditorium and into the bright Florida sunlight.

I shove Stamp playfully as he tugs off his latex monster gloves. “Maybe you can break both my feet next show. I could use a week or two off.”

He smiles, shouldering me as we head toward the tiny dressing room just off the wooden stage to the left. “Maybe you should mind your marks”âhe gives me that toothy grinâ”and your toes will stay out of trouble.”

“You were both off your marks,” Dane growls as he slumps into the scarred wooden chair in front of his vanity mirror. With a tissue he swipes the grease paint from around his eyes. He carefully folds the blackened sheet and sets it on the trash overflowing from the can at his feet.

“Sorry, De Niro.” Stamp leaves on his heavy black
eye shadow for effect âcause that's how he rolls these days. “It's kind of hard to see with a 10-pound mask on your head, but I guess it's easier for you since you have no hair to weigh you down.”

Dane sneers, but Stamp is already up and putting on a gray hoodie to hide most of his pale face. He steps into the suede slippers he'll wear until he has to get back into his giant Frankenstein shoes for our next show in less than an hour.

He zips up the hoodie, and I marvel at how he's taken to the Afterlife so quickly. Not that I'm much older among the undead, but still. It's been four months since the Fall Formal that killed him, and he hardly looks a day older. But then, I suppose that's the point of being undead; you never actually get any older.

Sure, his skin's a little grayer, his eyes a little darker, his teeth vaguely yellowâbut apart from that, he could be the hot guy with a (really) bad cold at any high school in the country. His little trademark Superman curl is gone, but he's still got all his hair. He mousses it messy, finger combing it over his broad, unlined forehead. “To look younger,” as he puts it.

In the mirror I see him fiddling with the hoodie's zipper, his long, pale fingers fluttering while he sneaks a peek at my back. I resist a wink, partly because Dane is there but partly because, let's face it, I've never been very good at winking.

Stamp looks toward the employee exit.

“Is Greta on break already?” Dane's chair is facing mine. Clearly he's been watching me watch Stamp. “I thought the puppet show didn't get off until one.”

“Greta's training the new girl this week,” Stamp says abruptly, probably eager to get to his new squeeze or just away from us, “so her schedule's a little more flexible.” He walks toward the door.

Dane nods and says for the thousandth time, “Be careful. Just because we didn't check in with the Elders and just because the Sentinels haven't found us yet doesn't mean we don't have to follow the laws.”

“Thanks, Dad.” Stamp walks out the backstage door.

The early afternoon sunlight streams in and reflects in 100 different directions off our vanity mirrors.

The door swings shut, and I turn to Dane with a wicked smile. “How long do you give this one?” I dab at the last of the stage makeup with my towelette, not that it makes much difference but it does make me feel all
Inside the Actors Studio.

“One week longer than the last.” Dane cracks his neck. He's removed his bulky Frankenstein jacket, the dusty gray one with shoulder pads, as well as the tear-away monster pants. He's handsome in his tight white T-shirt and those gray sweatpants that hug his tiny waist, the ones that look like they were cut with kid scissors to make jagged pirate edges. “You know he's playing with fire, right?” he says in that paternal tone he uses whenever Stamp, or pretty much any zombie law topic,
comes up. Or our apartment. Or what seasoning to put on our brains. Or what color lipstick I should wear.

“He listens to you.” Dane rubs the top of his stubbly head.

“Yeah, not so much anymore.” I slip into my worn flats. “Not since we broke up on Valentine's Day,” I add unnecessarily.

He sighs but can't hide that crooked smile. “What did you think was going to happen?” He puts on his hoodie and brings up one knee to tie his battered black sneakers. “The guy was a jock through and through. Just because he's a dead jock doesn't mean he forgot his jock ways. They're trapped deep in his DNA, where the Z-disease can't quite penetrate.”

I shrug and admire Dane's black eyes and hollow cheeks. How familiar his face is to me, how distant we've become since Stamp and I broke up a few weeks ago. I'd expected Dane to rush into my arms, declare his love, breathe a sigh of relief that we could finally be together, and â¦ and â¦ so far, nothing.

Of course, he could be punishing me for making it official with Stamp in the first place, but what did he want me to do? I'd gotten the guy killed after all. Should I have spurned his affections, dropped him like a hotâer, coldâpotato the minute Barracuda Bay was in our rearview mirror and we landed in our skuzzy apartment
in Orlando? I had to date Stamp. He knew that, and you know what? I wanted to date Stamp. Most of the time. Kinda. Sorta.