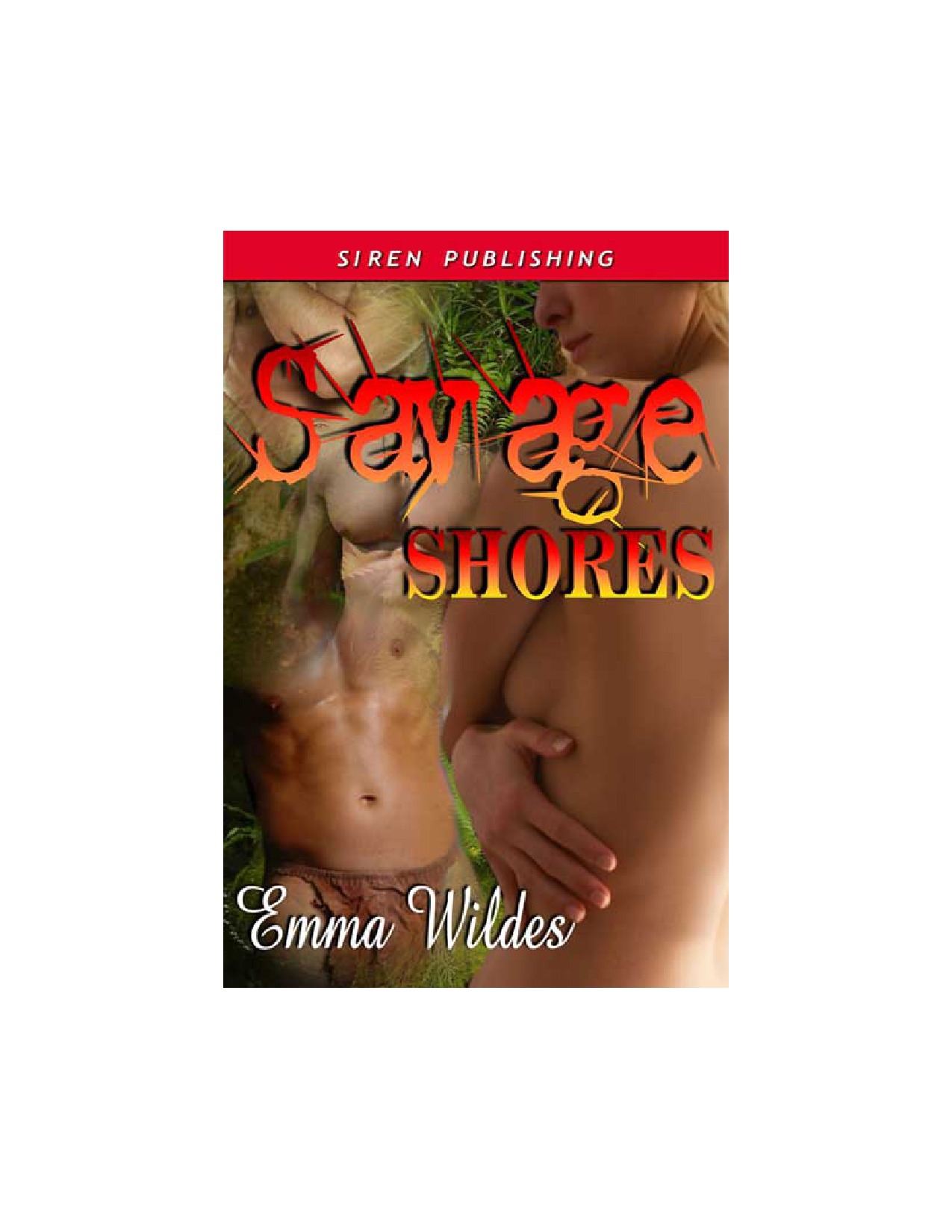 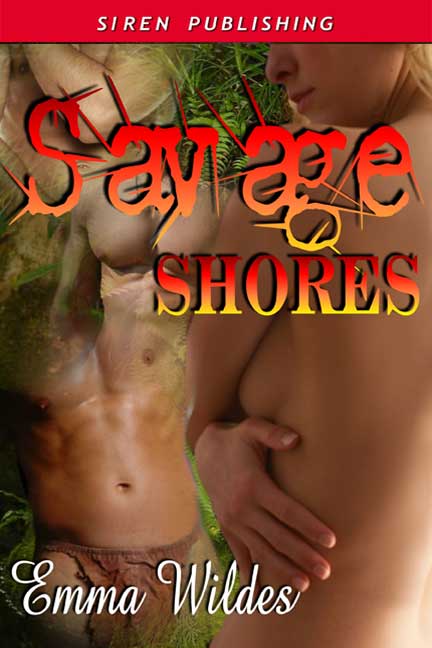 Almost lost in a storm-tossed sea, Jenna Hayward is grateful to

defy death. Finding herself alone on a deserted island except

for three of her other lucky shipmates, she discovers that

having so many attractive men around can be both

Jonathan Richmond is used to a life of privilege and wealth. The

one thing he isn't used to is having to share.

Fighting off deadly serpents, vicious jungle cats, and the

disturbing the delicate equilibrium of their unusual little society.

All goes well, until by a twist of fate they are rescued, and

suddenly the strictures of proper English protocol intrude on

Publisher’s Note:
Savage Shores
is a re-edited version of a 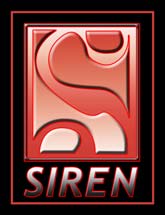 ABOUT THIS E-BOOK:
Your non-refundable purchase of this

use. It is
ILLEGAL
to send your copy to someone who did not

pay for it. Distribution of this e-book, in whole or in part, online,

offline, in print or in any way or any other method currently known

or yet to be invented, is forbidden without the prior written

permission of both the publisher and the copyright owner of this

All cover art and logo copyright © 2007 by Siren Publishing, Inc.

ALL RIGHTS RESERVED:
This literary work may not be

reproduced or transmitted in any form or by any means, including

electronic or photographic reproduction, in whole or in part,

All characters and events in this book are fictitious. Any

resemblance to actual persons living or dead is strictly

The storm sounded like a roaring beast, bellowing in fury.

Unable to walk, to even breathe, Jenna Hayward struggled to

gain the deck, stumbling and bouncing off the doorway as she

realized what was happening. A huge wave rose up before her

screamed; their agonized cries rose above even the awful howling

The main mast cracked like thunder under the onslaught,

coming down in a crashing fall of splintered wood and mangled

She was going to die. Even the thought seemed to be muted by

the roaring of the storm overhead, lashing around them.

The water towered over her for one long suspended second

before it descended in a tidal wave, slamming her backwards.

Stunned, unable to breathe, she flailed helplessly in that relentless

tide, swirling upwards, caught up in a raging torrent of seawater

and foam. Flung like a doll, it took her as it rolled backwards, and

she fought to grab the rail, a wail of despair escaping her lips as

she was carried over and dropped into the roiling water.

Lights flashed before her eyes as thunder crashed and waves

slapped her face, filling her mouth with water every time she tried

to gasp for breath. She struggled, her long skirts dragging at her

limbs, pulling her into the depths. A strong swimmer but losing the

battle with an inner panic, she fought the sea in a haze of

movement and noise. She was barely even aware when strong

hands seized her, and an arm came around her neck.

“God help us,” a male voice muttered in her ear. “She’s going

It was true. Even as she desperately tried to tread water, Jenna

heard the ship groan like a dying man. The vessel shuddered

visibly before her streaming eyes. A scream locked somewhere

deep inside her, unreleased but potent with her paralyzing fear.

The order came in disembodied harshness above the slashing

rain. “Let me swim and don’t struggle. If it comes down to your

It didn’t matter, Jenna thought, going limp with terror as the

ship listed and began to sink. Her life was over. She might as well

lashed together, but it kept them afloat. His body was so exhausted

from battling the stormy waves that it was all Jonathan Richmond

could do to hang on, one arm around the limp and possibly lifeless

body of the girl, the other looped over the debris. It was still

raining but not nearly as windy. The sea was calming after the

snarling rage of the night, turning into a simmering pout, bobbing

them up and down but no longer beating them half to death.

Death,
he thought, that was a cheerful notion.

The words were faint, and Jon squinted at the young man a few

feet away from him, half-prone on the impromptu raft, his legs

trailing in the water, his shirt almost completely torn from his lean

body. He was bloody. A gash showed at his temple and trickled red

down his cheek, but his teeth shone white in a sudden smile. “I

His valet tended to be cheerful, which he usually liked, but

must you always be so optimistic? We’re out in the ocean, hell

knows where, and what we will make it to, I haven’t a clue. Our

blasted ship just sank. For all we know we’re the only people to

survive.” It took effort to speak and Jon could barely growl out the

words, trying to breathe normally despite his weakened condition.

“He’s right. We can go only a day or two without fresh water.”

The other passenger on the debris was a man named Anthony

Reeves, a highly decorated officer in the Peninsular War.

Apparently having learned the lesson of survival, Jonathan had

actually seen the major leap from the ship seconds before it

relinquished itself to the briny depths. Hanging on to the bobbing

planks, Reeves said gravely, “How’s the girl? Is she alive?”

Shifting his grip, Jon let her head trail back in the water,

observing the slow beat of her pulse in her slender throat. “Barely

“It is a miracle she survived that wave. I saw it take her.”

“She’s heavy as Hades with all these clothes,” Jon muttered. “I

have half a notion to take off her bloody dress, if I could find the

energy. To hell with her modesty. I am not certain it will matter

anyway. She has been in a swoon for several hours, who knows if

shaking his head against the sprinkle of rain and staring, his face

streaked with droplets. “Now that the dawn lightens the sky, I can

see her a little better.” Then he added, “It would be a damned

shame if she died. She’s a beautiful young woman.”

“Hayward?” Jonathan asked, staring at the girl hanging so lax

against him, her lashes sticky against her alabaster cheeks. “The

famous general? I’ve met him once or twice. Some say he might be

our next Prime Minister.”

“It would not surprise me. As a soldier, I can tell you he is a

“An unlucky man,” Jonathan corrected cynically, shifting her a

little to ease the ache in his arm. “His daughter was just lost at

sea.” Her loose hair moved like seaweed, long and pale in the

shifting water, and her face was ashen, the delicate features washed

like bone. “Charles, now that the sea isn’t so rough, can you help

me disrobe her? I don’t want to lose her because my arm goes

numb. I have been hanging on to her for hours now.”

“No need,” Jonathan said gruffly, not sure why he didn’t want

to give up his unwanted burden. “If we remove her clothes, I’ll be

Obligingly inching closer, Charles lay on his stomach and

grasped her under the arms, allowing Jonathan to unfasten her

evening gown. It was heavy velvet and it slipped away easily under

the sheer weight of her skirts. She wore no corset, so naturally

slender it was unnecessary, and her head lolled to his shoulder

when he pulled her back into his arms. “Better,” he announced.

her. Now there’s nothing to her.”

“Her beauty,” Major Reeves said over the prick of the falling

rain, “is such that her father forbade her to visit him in Spain again.

In fact, she caused such a distraction among our Spanish allies that

he sent her home at once. I believe her mother died when she was a

child. The poor man, he dotes on her. When he learns of the ship

lost, he will be devastated.”

“Her beauty,” Jonathan said in a low, dry voice, “will cause no

riots here. I wonder where the hell we are?”

“Perhaps
in
hell.” Reeves lifted his face and looked up at the

opaque sky, which had begun to lighten but was still sullen and

moody. “For if I can imagine anything worse than dying of thirst in

the middle of a huge body of water, I don’t know what it might

“Sharks could be worse,” Charles said, his cheerful gaze

darkening. “I don’t much fancy the notion of sharks. Nasty, vicious

Tightening his hold on the young woman floating next to him,

Jonathan said sarcastically, “Thanks for that particular vision, you

young idiot. I was worried enough about dying of thirst because of