Read A Bridge Through Time: Book 1 of The Thistle & Hive Series Online

A Bridge Through Time: Book 1 of The Thistle & Hive Series 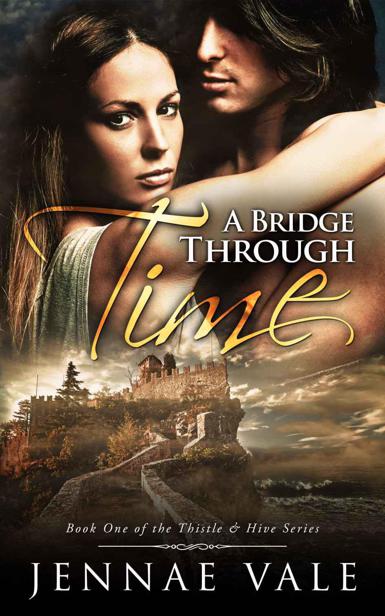 A BRIDGE THROUGH TIME

Thank you to my family and friends for your support and encouragement throughout this process.

Thank you to my editor, Deb Williams - The Pedantic Punctuator, for all your help editing my book and getting ready for publication.

Thank you to Dane at Ebook Launch for creating such a beautiful cover.

Thank you to Sam Raines at BookFuel.com for checking in with me and answering all of my questions as I prepared to self-publish.

Thank you to the members of the SVRWA and the CHRWA for being an incredible source of knowledge and support.

Ashley thought she might be going crazy as her heart raced in her chest and a rush of adrenaline made her light-headed. No, there was no doubt; she was definitely going crazy. What other explanation would account for the man, who had just appeared out of thin air?

“Don’t panic. Breathe,” she told herself.

She had walked to her car with apprehension, a little jumpy, a little edgy. Then as she sat behind the steering wheel, ready to drive off, he appeared right in front of her. Ashley sat motionless, staring at him. He didn’t move. He gazed back at her, with stormy gray eyes and ebony hair, which hung past his shoulders. She tilted her head from side-to-side, memorizing everything about him. If she had to guess, she’d say he stood about 6’3” and was solidly built - not all bulky muscle like a body builder - but chiseled, defined and strong. He dressed oddly, not in jeans and a t-shirt like most guys she knew, but in a kilt. She didn’t have any expertise when it came to kilts, because she hadn’t seen many, but this one didn’t appear to be the kind you might buy off the rack. The hilt of a large sword peeked up over the right shoulder of his plain linen shirt, and yet she was not afraid. Laces took the place of buttons below the neckline. His feet were covered by boots of the softest leather.

For the last month, she had been having visions of this man, who happened to be the most drop dead gorgeous guy she had ever seen. He always looked at her with longing in his eyes. It made her feel desirable and beautiful, two words she definitely wouldn’t generally use to describe herself. The sightings had no rhyme or reason. He appeared to her at the oddest times, and without warning - at work, at home or simply walking down the street. Could he be a ghost? A daydream or some sort of otherworldly being? And if so, why did he appear to Ashley? He had to be one of those options, because he certainly couldn’t be real. She must be hallucinating, because every time she had seen him in the past month, she’d been so freaked out that she’d closed her eyes, shaken her head and when she checked again, he was gone.

“I’m not taking my eyes off you this time,” she said aloud.

Ashley moved slowly. As she opened her car door and got out, he was still right in front of her and her nose picked up the scent of pine trees, wood smoke and fresh air. She closed the door and walked towards him, with her hand out to touch him. He still hadn’t moved. She forced herself not to blink as she inched closer, and she was almost there when she heard a loud crash behind her. A shopping cart smashed into the back of her car and her hallucination, or whatever he was, vanished.

“Oh, gosh,” the woman with the wayward shopping cart cried. “I am so sorry! I let go for a second to open my trunk and when I turned around, the cart was heading right for your car! I can’t believe I let that happen!”

Ashley distractedly checked her car. “Everything seems okay. No damage done.” She glanced back to the spot where her mystery man had been. “Hey, you didn’t happen to see the guy who was just standing in front of my car, did you?”

The woman shook her head, “No. I didn’t notice anyone. Are you okay? You look a little shaken. I hope it’s not because of me.”

“Are you sure?” the woman asked and Ashley nodded. “I’ll take my cart and go then. Sorry.” The woman walked away and left Ashley, staring at the empty spot in front of her car.

Ashley pulled into her friend Jenna’s driveway. Tears filled her beautiful amber eyes, as she rested her head on the steering wheel, her dark auburn curls falling in disarray around her face and shoulders. She needed to get this sorted out and fast - or she might find herself in the loony bin.

“Why, why, why?” she asked no one in particular.

She had been dealing with anxiety issues for years, but they were spiking now and seeing things that weren’t there wasn’t helping at all.

“Get it together, Ashley. Great, now I’m talking to myself. Jenna’s got to help me figure out what’s going on.” She walked to the door and while ringing the doorbell she chanted to herself. “Please be home, please be home.”

Jenna opened the door, and in the background, Ashley observed her deadbeat husband, Jonathan.

“Ashley, are you okay? You look terrible,” Jenna said.

“Thanks,” Ashley replied sarcastically. “And no, I’m not okay.”

“What’s wrong? Did something happen? You didn’t run into Dax, did you?”

“I really need to talk to you… alone.” Ashley eyed Jonathan, who had plopped himself down on the sofa with a sandwich and a beer.

“I’m not moving, so you ladies will have to take it somewhere else.”

Jenna rolled her eyes, and taking Ashley by the arm, guided her towards the backyard. Ashley made sure she gave Jonathan the evil eye before she turned away.

“Jonathan, don’t get food on my new sofa,” Jenna called, as they walked out through the French doors.

The sun was shining, the birds were singing and the orange blossoms smelled amazing on this beautiful Northern California day. Ashley and Jenna sat side-by-side in the Adirondack chairs, tucked into a cozy corner of the back patio.

“So, spill it. Why do you look like you’ve just seen a ghost?” Jenna asked, concern for her friend evident on her face.

“I feel like I’m losing my mind and I think I might have actually just seen a ghost.” Ashley proceeded to tell Jenna about her visions over the last month, and Jenna, being the good friend she was, quietly listened.

“Does he ever talk to you?” she asked, when Ashley finished.

“No. He just stands in front of me, looking incredibly hot.”

“Hmmm. Well, if you’re going to see ghosts, then my vote would definitely be for incredibly hot.” Jenna laughed.

Ashley was not amused.

Jenna sobered, trying to reassure her friend. “I’m sure it’s just a reaction to the stress you’ve been under.”

“Do you really think so? I don’t want to be crazy, Jenna,” Ashley moaned.

“You’re not crazy. Believe me. I mean, think about it. You’re still getting over the breakup with Dax; you’re getting kicked out of your apartment, and to top it all off, you lost your job. Anyone under that much stress is bound to have physical and psychological reactions.”

“Let me help to relieve some of the stress. Come live with us for a while, and if you still think you need therapy after you’ve had a chance to relax, you can make an appointment to talk to someone.”

Ashley was a bit skeptical. “What about Jonathan? Won’t he mind? I’m not his favorite person.”

“Look, I don’t know what the deal is between you two, but he doesn’t get a say. This is my house and I pay all the bills, so he’ll just have to deal. Come on, do it,” Jenna urged.

Ashley thought about her situation and realized what a relief it would be, not to think about housing while she searched for a new job. She had never been the helpless type, but right now, she could use all the help she could get. “Okay, I will. Thanks, Jenna, you’re the best.”

“My luck has been pretty horrendous lately. I can’t believe my boss decided to just up and close the business. I really needed that job - not for the money, of course, but it kept me busy, so I wouldn’t sit around thinking about Dax all day.”

“Dax is an ass. He doesn’t deserve to have you, or to have you wasting your time thinking about him. I know you’ll be mad at me for saying this, but he did you a big favor by breaking up with you.”

Ashley ignored Jenna’s comment and focused on her unemployment instead. Her parents had set up a trust fund for her and so she really didn’t need a job, but she liked to be productive and having a career gave her a sense of self-worth.

“I might go back to teaching, but that probably wouldn’t be until the fall, if I can even find a position.”

“Don’t think about it right now, take some time to relax. Once you’re settled in here, maybe you should go on a vacation. Do a little travelling.”

Ashley smiled for the first time in days. “That sounds like an excellent idea. A change of scenery might be nice and besides I’m not lacking for cash, so spending a little on retaining my sanity seems like a sound investment.”

“It’s settled, then. Let’s concentrate on getting you packed up and moved in here, as soon as possible.” Jenna gave Ashley a big hug and they walked arm-in-arm into the house, to share the good news with Jonathan.

Ashley’s visions hadn’t stopped when she moved in with Jenna and Jonathan, but they became less concerning to her the more she saw her mystery man. The visions were almost comforting in a way. She felt as if he were watching over her, like a guardian angel. It didn’t hurt that he was so devastatingly handsome or that she was the sole focus of his attention. Ashley decided that she was not going crazy after all. This guy, whom she was now referring to as Grey Eyes, had to be out there somewhere and somehow she was going to find him.

Ashley spent a few weeks at Jenna’s house before beginning her extended vacation. Jenna hadn’t been happy when she heard Ashley’s plans.

“Ashley, when I told you to take a vacation, I thought you’d be heading to the Caribbean for a couple of weeks, not to Scotland for an indefinite amount of time,” Jenna complained. “I don’t like the idea of you being gone for so long.”

“I know, Jenna. It’s a little out of the ordinary for me,” Ashley said.

“A little? Try totally out of the ordinary,” Jenna replied.