Read A Column of Fire Online

A Column of Fire 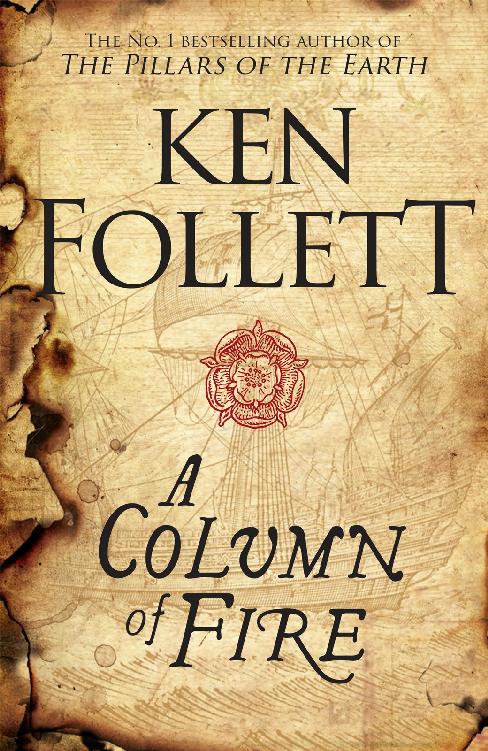 I hope you won’t need this. Any time I think you might have forgotten a character, I’ve put in a gentle reminder. But I know that sometimes readers put a book down and don’t get another moment to read for a week or more – it happens to me – and then sometimes you forget. So here’s a list of the people who pop up more than once, just in case . . .

Swithin, his father, earl of Shiring

Jonas Bacon, captain of the
Hawk

Aphrodite Beaulieu, daughter of the count of Beaulieu

Fictional members of the Guise household

Gaston Le Pin, head of the household guard of the Guise family

Children of Henri and Caterina:

King James VI of Scotland and King James I of England

We hanged him in front of Kingsbridge Cathedral. It is the usual place for executions. After all, if you can’t kill a man in front of God’s face you probably shouldn’t kill him at all.

The sheriff brought him up from the dungeon below the Guild Hall, hands tied behind his back. He walked upright, his pale face defiant, fearless.

The crowd jeered at him and cursed him. He seemed not to see them. But he saw me. Our eyes met, and in that momentary exchange of looks there was a lifetime.

I was responsible for his death, and he knew it.

I had been hunting him for decades. He was a bomber who would have killed half the rulers of our country, including most of the royal family, all in one act of bloodthirsty savagery – if I had not stopped him.

I have spent my life tracking such would-be murderers, and a lot of them have been executed – not just hanged but drawn and quartered, the more terrible death reserved for the worst offenders.

Yes, I have done this many times: watched a man die knowing that I, more than anyone else, had brought him to his just but dreadful punishment. I did it for my country, which is dear to me; for my sovereign, whom I serve; and for something else, a principle, the belief that a person has the right to make up his own mind about God.

Ned Willard came home to Kingsbridge in a snowstorm.

He sailed upstream from Combe Harbour in the cabin of a slow barge loaded with cloth from Antwerp and wine from Bordeaux. When he reckoned the boat was at last nearing Kingsbridge, he wrapped his French cloak more tightly around his shoulders, pulled the hood over his ears, stepped out onto the open deck, and looked ahead.

At first he was disappointed: all he could see was falling snow. But his longing for a sight of the city was like an ache, and he stared into the flurries, hoping. After a while his wish was granted, and the storm began to lift. A surprise patch of blue sky appeared. Gazing over the tops of the surrounding trees, he saw the tower of the cathedral – four hundred and five feet high, as every Kingsbridge Grammar School pupil knew. The stone angel that watched over the city from the top of the spire had snow edging her wings today, turning the tips of her feathers from dove-grey to bright white. As he looked, a momentary sunbeam struck the statue and gleamed off the snow, like a benison; then the storm closed in again and she was lost from view.

He saw nothing except trees for a while, but his imagination was full. He was about to be reunited with his mother after an absence of a year. He would not tell her how much he had missed her, for a man should be independent and self-sufficient at the age of eighteen.

But most of all he had missed Margery. He had fallen for her, with catastrophic timing, a few weeks before leaving Kingsbridge to spend a year in Calais, the English-ruled port on the north coast of France. Since childhood he had known and liked the mischievous, intelligent daughter of Sir Reginald Fitzgerald. When she grew up, her impishness had taken on a new allure, so that he found himself staring at her in church, his mouth dry and his breath shallow. He had hesitated to do more than stare, for she was three years younger than he, but she knew no such inhibitions. They had kissed in the Kingsbridge graveyard, behind the concealing bulk of the tomb of Prior Philip, the monk who had commissioned the cathedral four centuries ago. There had been nothing childish about their long, passionate kiss: then she had laughed and run away.

But she kissed him again the next day. And on the evening before he left for France they admitted that they loved one another.

For the first few weeks they exchanged love letters. They had not told their parents of their feelings – it seemed too soon – so they could not write openly, but Ned confided in his older brother, Barney, who became their intermediary. Then Barney left Kingsbridge and went to Seville. Margery, too, had an older brother, Rollo; but she did not trust him the way Ned trusted Barney. And so the correspondence ended.

The lack of communication made little difference to Ned’s feelings. He knew what people said about young love, and he examined himself constantly, waiting for his emotions to change; but they did not. After a few weeks in Calais, his cousin Thérèse made it clear that she adored him and was willing to do pretty much anything he liked to prove it, but Ned was hardly tempted. He reflected on this with some surprise, for he had never before passed up the chance of kissing a pretty girl with nice breasts.

However, something else was bothering him now. After rejecting Thérèse, he had felt confident that his feelings for Margery would not alter while he was away; but now he asked himself what would happen when he saw her. Would Margery in the flesh be as enchanting as she seemed in his memory? Would his love survive the reunion?

And what about her? A year was a long time for a girl of fourteen – fifteen now, of course, but still. Perhaps her feelings had faded after the letters stopped. She might have kissed someone else behind the tomb of Prior Philip. Ned would be horribly disappointed if she had become indifferent to him. And even if she still loved him, would the real Ned live up to her golden remembrance?

The Kingdom of Light by Giulio Leoni
C S Lewis and the Country House Murders (C S Lewis Mysteries Book 2) by Kel Richards
The Big Dirt Nap by Rosemary Harris
Game On by Calvin Slater
You Before Anyone Else by Julie Cross and Mark Perini
Memory in Death by J. D. Robb
The Trouble With Spells by Lacey Weatherford
Caddie Woodlawn by Carol Ryrie Brink
The Graveyard Game by Kage Baker
Technicolor Pulp by Arty Nelson