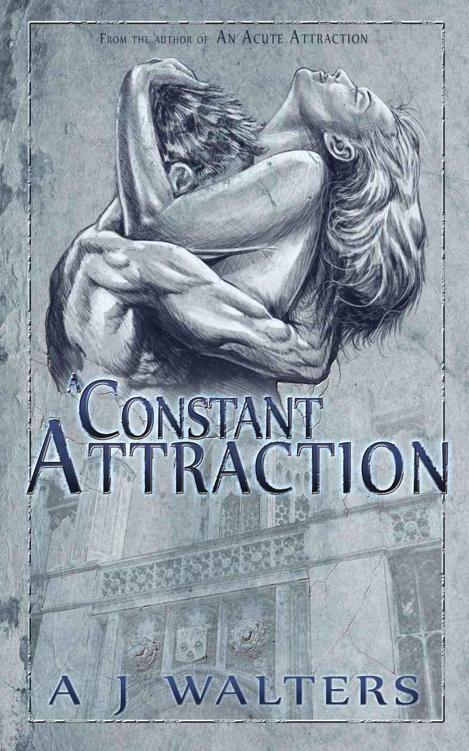 A J Walters is a contemporary romance author who made her first appearance on to the indie circuit with the release of An Acute Attraction. Having interests in history, romance and elements of erotica, she has brought all of these together in The Attraction Series.

She currently lives in Staffordshire, England with her two children.

Books by A J Walters

In memory of my mum, thank you for the memories.

To the two best boys in the World, here's to making many more.

Standing tall, at the large imposing window of her Cambridge hotel room, Dr Emiliana Acerbi presses the end call button on her phone. She is confident that she is the one in control. She is the one calling all of the shots, holding all of the cards and that she is the strongest out of the two of them, out of her and Marc Sanders. She has always been this way, since very early on in life and had to be in order to succeed, to succeed in what is mainly seen as a man's world.

From a young age men had been the authoritative figures within her family and community in Italy. There the men were still very firmly set in their ways. The men were the bread winners, head of the family and everyone looked up to them. This became more apparent after her father passed away, after losing his battle to lung cancer, when she was only six years old and her mother had to turn to her uncle, her father's elder brother for help and support. As it was him who they had to rely upon, to avoid being homeless and put out on to the street, he used and abused the situation. Emiliana wasn't allowed to do anything without his permission and in time, her mother turned into the ghost of a woman she once was. Valeria Martinelli had no say in what discipline or punishment was handed out, or which direction her daughter was to take, therefore just blended into everything else around them.

However Emelie wasn't a daft or silly little girl. In fact, she was the complete opposite. Yes, she played by the rules and did what was expected of her. She kept her mouth shut and continued to do what was asked of her. The display and theatre she put on for her uncle was enough to pacify him, but not too obvious for him to question the reasoning behind her way of living. At the age of ten, Emelie made the conscious decision that she was not going to lead the rest of her sorry and turbulent life like that. So, she buckled down at school and any spare time she had in between having to do chores around the house and entertaining her uncle, she would do extra studying. As any spare time was sparse, she would often stay awake late into the night and, either using the bright moonlight or what little street lighting there was, she would cram as much as she could in. Emelie knew her uncle would never fund her college or university fees, as he wanted her to become another little woman, just like her mother, who stayed at home and did nothing else.

With this she needed to prove to herself and others, such as her teachers at school, what she was truly capable of doing. Striving to be the best, to be at the top of her classes, taking home extra work, Emelie hoped it would lead to her getting a scholarship or grant.

As it went, she did ace her exams and at the age of sixteen, Emelie packed the one case she could get a hold of and left for Milan, her only possessions being a few clothes, her diary and a photograph of her parents taken during happier times. Her uncle hadn't been a complete tyrant. He would give Emelie 'pocket money' as he called it, for when she worked incredibly hard for him, entertaining him and his comrades. Six years of saving and stashing the money in an old antique tin under her bed, meant she had enough to buy her ticket and pay for the first couple of months rent. It broke her heart to sell the one item that had belonged to her father, but she knew that her father would approve of her using the money from the sale of the gold pocket watch, to fulfil her dream of becoming something and someone. So, until her grant kicked in, she had to use the cash to live off.

Her living conditions may not have been great, but she was free!

From that moment on her attitude was one of all out for herself. She would be proven yet again that she could accomplish anything, accomplish a great deal in what was predominately a man's world.

It was through her tough, strong attitude to life and her succeeding in her studies that lead her to where she is now. (This is also what attracted Stefano to her when they were both attending the same University. He saw her passion, her wanting in life and determination to get it.) The more she studied medicine, in particular her research in finding a cure for cancer, the more obsessed she became by it. The disease had taken her father from her, taken her early years away from her and she wasn't going to let it take any more away from her or others. Right now though, other elements have come into play and there is no way on this earth, anyone is going to spoil her future and chances of success with in the medical sector. That includes Marc Sanders.

She and Marc have known each other for some years now, as it was twelve years ago that they had met at a conference in Montreal. Both she and Stefano had attended together, when they were introduced by a mutual colleague. As a threesome they seemed to hit it off straight away. As well as a common interest with in the medical field, Marc and Stefano had a shared interest in golf and architecture. Okay, Marc didn't play golf particularly well and more often than not would lose the bet they put on, but it was the company and conversation that made it so they soon became firm friends. Whenever either party were visiting respective countries; Italy and America, they didn't have to worry too much about where to stay or which hotel to book into, as they would be invited to stay over at each others homes. Marc's triplex apartment situated close to the Charles River, had more than enough space for them all to stay in. Emelie and Stefano's four bedroomed house on the outskirts of Bologna, offered the change of pace that appealed to Marc.

In this time Emelie had grown to know Marc very well. She had seen him date a few women and had witnessed the way he'd been around them. Yes he slept with them. Yes, he had wined and dined them. However, she had never seen him be the way he was when with Isabel. The look he gave her. The way his deep, emerald green eyes glinted in her presence and shone when he and Isabel spoke or laughed together. The way she had wanted him to look at her.

Emelie herself had tried to be more than friends with Marc at one stage, when her marriage to Stefano had hit a rocky patch. She had flirted and made her intentions incredibly clear to him, but Marc didn't want to know. He made it abundantly clear that he would never, in no uncertain terms, date or have sexual relations with any woman who was already involved with another man, no matter how unstable or loveless the relationship was between either partner. On one occasion Emelie felt that she had been publicly humiliated and embarrassed when Marc forcibly removed her hand away after she had tenderly touched his cheek and offered her bed to him. The wine that had been consumed had made her all the more braver to do it. He verbally told her, nothing more could come of the professional relationship they shared.

Emelie inwardly spat, remembering how he told her to sober up and to go home to Stefano, to work their marriage out. Marc had pronounced the words 'professional relationship' as though the friendship they also supposedly had, was nothing.

Following on from that incident, there did seem to be a weighted awkwardness between them. A chasm had opened up and she worked tirelessly to close it again. Marc's visits to their family home in Italy started to dwindle and he, what she thought, made excuses whenever she spoke about the possibility of staying with him or whenever she had to go over to the US with work. In the end and as it still is now, the only time that Emelie, Stefano and Marc would meet up, would be at medical
conferences and presentations held around the world. Typically, Emelie saw that her so-called loving husband, Stefano hadn't even noticed the tension and what was going on around them in their personal life, as he was too engrossed in his career and the research they were doing. That part of his life had taken over everything else. At one point in their marriage, they had a fiery and raw sexual relationship. Stefano being the red hot blooded Italian he is, was a stud in the bedroom, but then the greed for fame and fortune took over the greed for lust and love. They started sleeping in separate bedrooms as he would work longer and longer hours at the university lab, forcing them to become more and more distant. And yet in public they could put on a show stopping display of mutual unification; Stefano constantly holding on to his wife by her elbow, seemingly shackled together, him being the heavy iron ball.

Eventually Emelie fell into this way of living, (if you can call it living) performing for the spectators and audience. However once behind closed doors it all changed and so did her heart, it froze over as there was no warmth, no fire in their shambles of a marriage. With that, she followed the same selfish path as Stefano. Her original reason for going into medicine had been replaced by the wealth, fortune and having her name known around the world. This was what her future consisted of now. She no longer cared about what others thought of her. She had heard all of the whispers, the names of 'Ice maiden' and 'cold hearted bitch' being thrown around. However, these only spurred her on even more; she had power and was feared by many.

So now standing in her cold, clean and clinical looking room, she knew exactly what she had to do.

Jett by Honey Palomino
Encyclopedia Gothica by Ladouceur, Liisa, Pullin, Gary
A Woman Made for Pleasure by Michele Sinclair
Abandoning the Rules by Grace, Jp
Quidditch a través de los tiempos by J.K. Rowling
The Alamut Ambush by Anthony Price
Ghost in the Blood (The Ghosts) by Moeller, Jonathan
Crime and Punishment by Fyodor Dostoyevsky
Trashy by Penny Lam
Believing Lies by Everleigh, Rachel