Read A Funny Thing Happened on the Way to Heaven Online

A Funny Thing Happened on the Way to Heaven 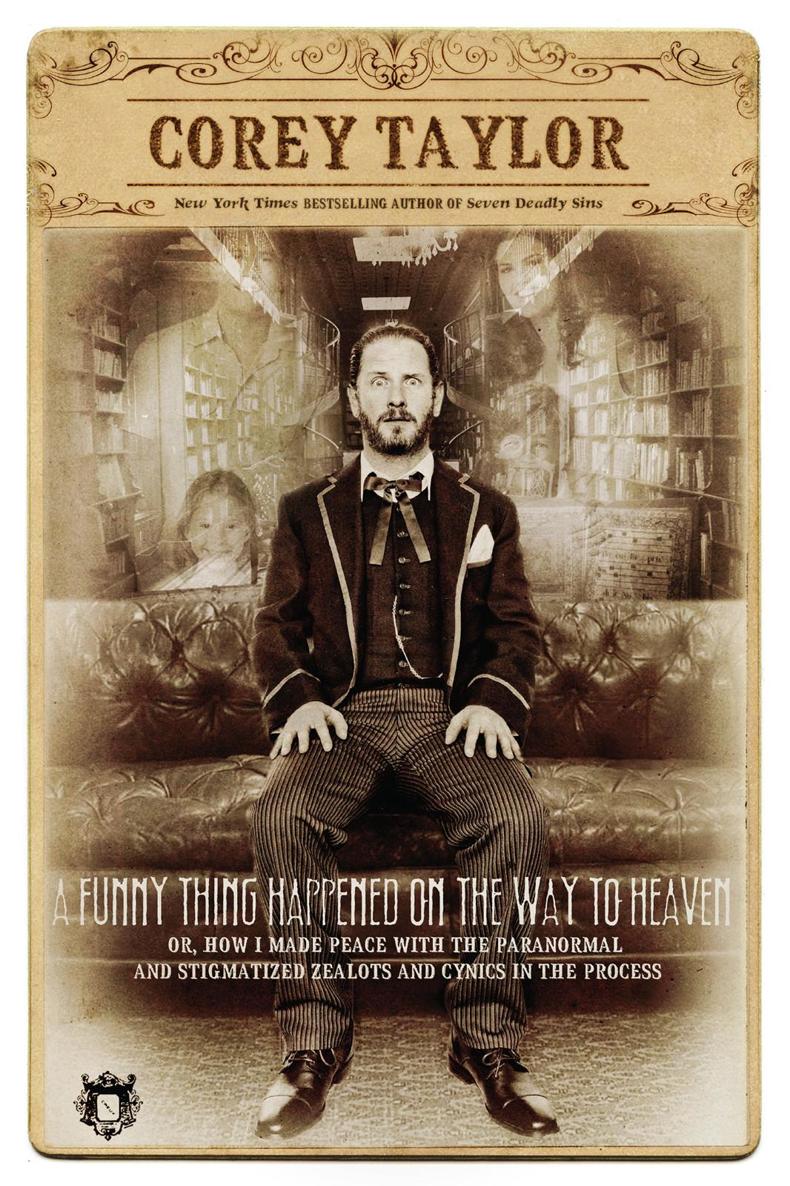 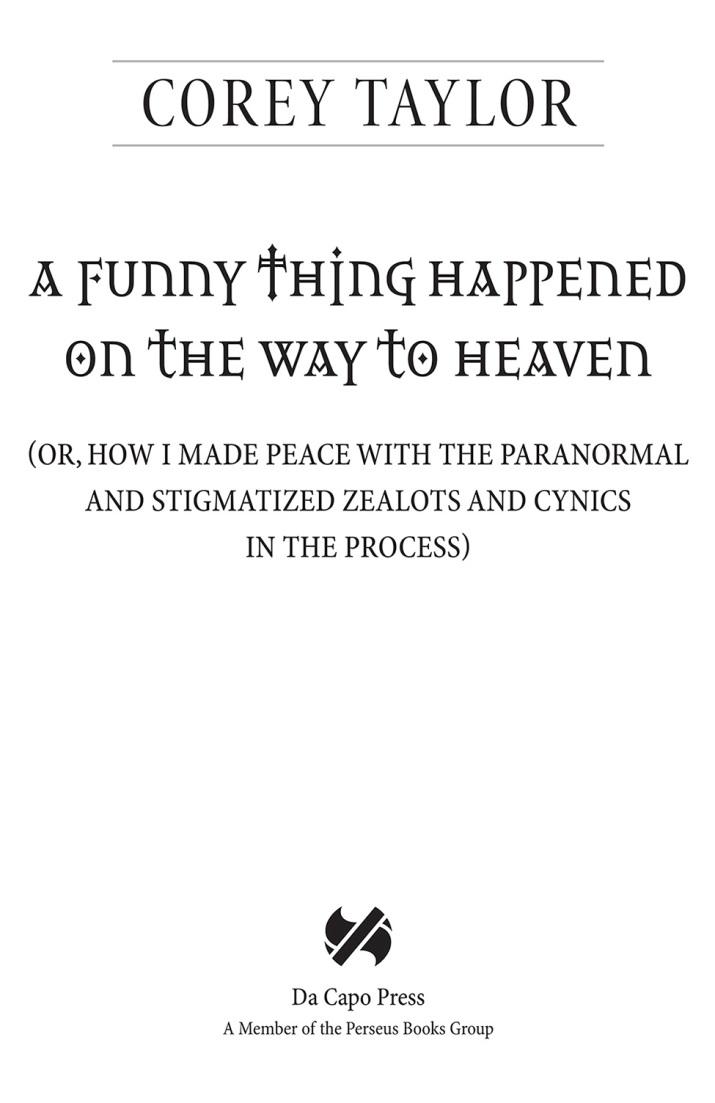 This book is dedicated as always to my family,

who keep me focused and inspired on an almost infinite loop.

Without them, I am ever the rambler.

With them, I am always ready, willing, and aware.

I love you all with every bit of my heart.

Also, I dedicate this to Charles Bonnici,

who taught me more about devotion, love,

and what it means to be a man than

any other living being on earth.

And I’ll do my best.

But First Let’s Meet Our Contestants

One Night in Farrar

Wine and Spirits with Friends

A Haunting in New York?

The Kids on the Circle

You'll Have to Pay for Another Five Minutes

At first cock-crow the ghosts must go

Back to their quiet graves below.

There was something awesome in the thought of the solitary mortal standing by the open window and summoning in from the gloom outside the spirits of the nether world.

I don’t know if God exists, but it would be better for

His reputation if He didn’t.

What is this that stands before me?

Figure in black which points at me. 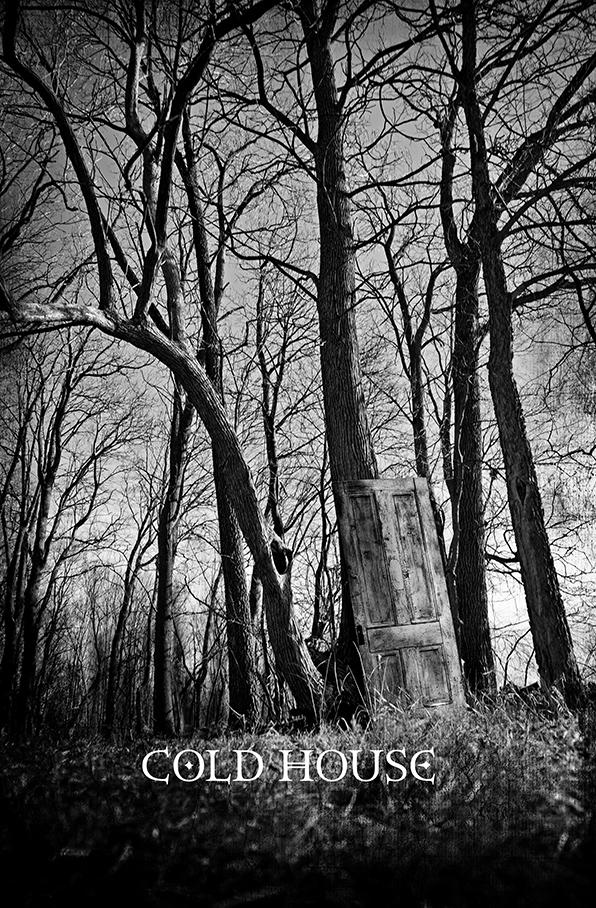 Y
OU
SEE
THEM
EVERYWHERE
THESE
DAYS
. You see them in movies and cartoons, advertisements and reality shows. Celebrities line up to tell their stories just so they have a good excuse to shiver and shake in their designer sports jackets. They are so common today that it is almost crazy to imagine a time when the very idea was disturbing. But there was indeed an era when the thought of ghosts was enough to send a tendril of chilly dread down your spine. I am not talking about the guy under the sheet with the eyeholes cut out or the “groovy” spooks that have been plaguing Scooby and the gang since 1969. I am talking about the footsteps right behind you, the padded shuffle on hardwood floors where there should be no noise at all. I am talking about the shadow in the corner of your eye when you are sitting at home alone. I am talking about moving objects and flying silverware and waking up with scratches you know for a fact were not there when you went to bed. There are spaces between spaces and doors that go nowhere. From orbs to shades, the spirit end of the paranormal pool is anything but shallow, but it is easy to find yourself drowning.

When you are young, if you are anywhere near a group of same-aged folk and you want to freak each other out, you tell ghost stories. You gather up a blanket and you swap them like baseball cards at the expo, waiting with your breath held for your turn at the mike because, nine times out of ten, everyone in that room has a ghost story. They can be as vanilla as seeing your great grandfather in the cellar or they can be as mollifying as the dark shape that follows you to every town you have lived in since you were still taking naps in school. But in my experience almost everyone I know has a ghost story, and anyone who does not have one secretly and desperately wants one.

People have been infatuated with the supernatural almost as long as they have been with religion. In fact, if religion were a lounge singer, then the paranormal would be a rock star. Unless you worship snakes or speak in tongues, most of the time your chosen faith is fairly banal. But the unexplained . . . shit, that is like your first leather jacket or your first French kiss. Taboo is always the more appealing possibility. Maybe it is the implied darkness or the fantasy side, but I do know ghost stories are more intriguing because no two are really the same. The Bible only really changes when someone new comes to power.

And let’s face facts: people love being scared. It is the same reason I watch every damn shark movie that comes out, even though the mere sight of them makes me want to fill my pants with the brown sound—I love the feeling. You do not take a first date to a chick flick; you take her to something that is going to make her jump straight into your arms in terror, preferably at a drive-in. Nothing too gross and gory—something that is just intense enough to close the deal for you. Ghost stories are quite simply our early introduction into that fierce side of the world. It is bonding and sharing and fucking with people all rolled into one. It is delicious masochism.

I am about to tell you a story that I have not recounted to anyone since I was fourteen years old. It is extraordinary, terrifying, and, at the risk of committing the sin of pun, very haunting. It is also true; some of the events are a bit loose, as this happened to me thirty years ago, but the pieces I remember are as vibrant today as the night they occurred, and the more I write it down, the more it is all coming back to me—stronger, clearer, and more defined. Doubt if you want. Scoff if you wish. It does not change the fact that it happened. And I was there. For better or worse, I was there.

I was nine years old in the summer of 1983, “growing up” on the south side of Des Moines, Iowa, my hometown backdrop off and on for most of my life. Unbeknownst to me, I was a year away from moving to Florida and spending the better part of my teens on the move, forever giving up any semblance of roots in favor of a second-rate vagabond existence. But in ’83 I had been in Des Moines for three wonderful years and had managed to find some semblance of a real life, to feel like a real kid. I was a Cub Scout until an unfortunate brake failure caused me to ride my BMX through the screen door of my scoutmaster’s house. I played little league baseball and bowled on a kids’ league (on a team that was meant to be called “The Cannibals,” but some adult renamed us “The Cannon Ballers” . . .) at a beautiful old alley called Bowlerama, where my grandmother had bowled since before I was born. I lived in a basement apartment just a short walk away from the corner of South East 14th and Watrous Avenue, and from first to mid-fourth grade I attended Andrew Jackson Elementary School, which was only a few blocks away. You could follow Watrous right to Jackson’s front door if you wanted, wind around the corner-hook that finally t-boned at Indianola Avenue, then cross the school’s vast front yard. But there was another more direct and mysterious route that led you to the school, opening out onto its parking lot and the outside playground.

Before the convenience store moved years later, the Quik-Trip gas station on 14th and Watrous was on the other side of the street. Perpendicular to the shop was nothing but forest, only really cut off by the houses that lined the way to school. But there was a path through the woods that was very nearly a straight line to Jackson Elementary. So my friends and I would sidestep the street, make our way through the trees, and head deep into what we called the South Side Woods. The path itself twisted and turned, providing a virtually crazy maze that we happily skipped on as the morning dew dried under a warm morning sun. But as we got closer to school, the woods took on a fairly sinister feeling.

About halfway through the expanse, bizarre “traps” and gnarly rusted tripwires started popping up on the path. They were specifically designed to fuck with anyone on the path itself—the wires crossed it like someone was trying to catch us and hurt us. Knowing the trail as well as we did, we still had to watch where we were going. The strange thing was that every once in a while the wires and traps would move—someone was moving them. We never knew why. However, as dangerous as these hazards were for a bunch of kids, what lay up ahead was like something out of a Wes Craven movie.

In the middle of this forest, clearly removed from the community that surrounded it, stood a two-story abandoned house, gutted and decrepit, a tower of foreboding set against this suburban gothic landscape like a hangover from the Brothers Grimm’s seedier days. It was the essence of the color gray and defiant in the face of the elements; no one really knew how old it was, how long it had been there, or who had wanted to live there, seeing as it was not on any street nor did it have a driveway that connected it to the outside world. It was just a hulking mess that scared the ever-living shit out of us kids—terrifying messages had been scrawled on the outside walls, most likely by teenagers who hung out there. Thinking back now, it was really just a creepy house that creaked and shuddered, but to impressionable nine-year-olds, it was the vacation spot of the devil itself. Of course we were fascinated by it even as we avoided it like the plague. But none of us had the stones to go in. Even on a dare—which to a kid is like a binding contract you could take to court—we would not go near it. We hurried past as much to get away from it as we did to get to school on time. But even when we could not see it, we knew it was there, and we talked about it constantly, so much so that my friends and I started referring to it as Cold House.

The summer of ’83 was a huge time in my life. I was beginning to think a lot like I do today, and I was starting to realize that kids liked spending time with me because I had no fear and was constantly entertaining. After Return of the Jedi came out, my friends and I would recreate the movie, and I was always voted Luke Skywalker, charging onto the field we usually played stickball on with my broken secondhand plastic red lightsaber to save the day. I rolled with a lot of neighborhood kids, some the same age and some a little older. You could find us at my house after school—watching G.I. Joe cartoons on WGN and videos on a newer station called MTV because we were one of the few families who actually had cable, albeit stolen. So I always had friends around, and during that summer there was always a sleepover at someone’s house.

Nomads' Fall: Burning Bastards MC by Ryder Dane
My Soul to Keep by Melanie Wells
Maybe Yes by Miles, Ella
Los crímenes del balneario by Alexandra Marínina
Rock Me All Night by Katherine Garbera
Until I Found You by Bylin, Victoria
Barbara Samuel by A Piece of Heaven
Forbidden by Tabitha Suzuma
Chronicle of a Death Foretold by Gabriel García Márquez, Gregory Rabassa
I Hope You Find Me by Trish Marie Dawson