Read A Handful of Time Online

A Handful of Time 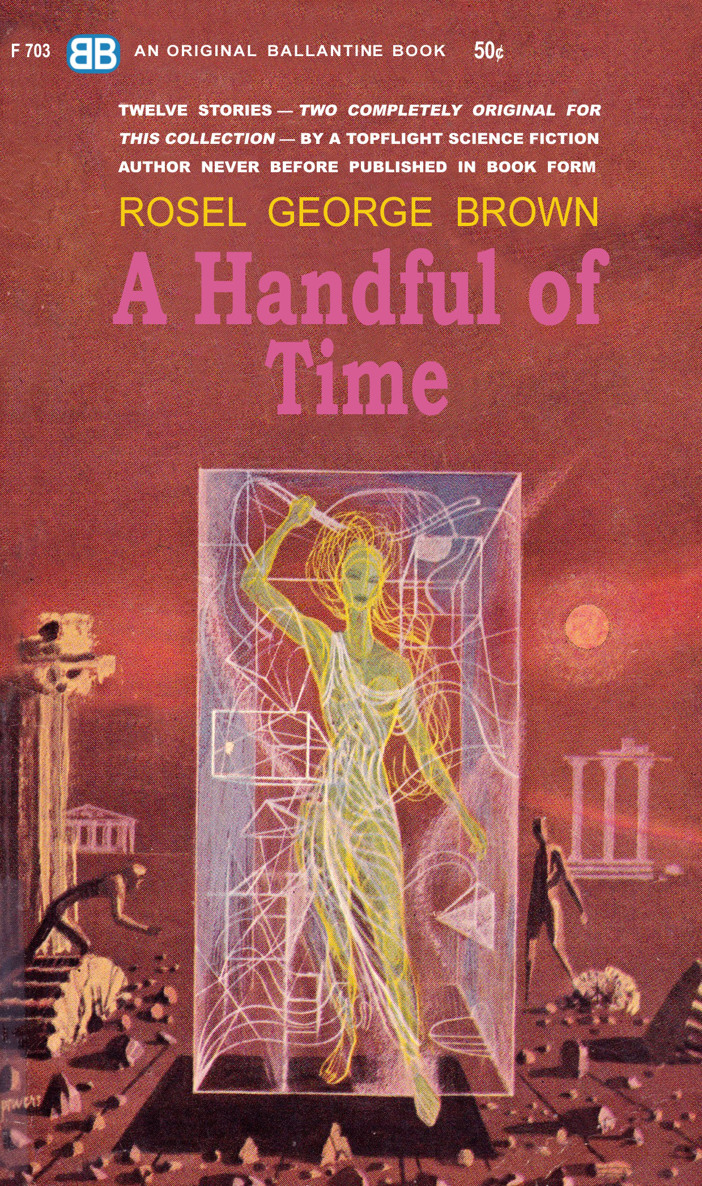 A Handful of
Time

for all those other things, but mostly for fun.

The following stories in this volume are reprinted from the magazines in which they originally appeared:

A LITTLE HUMAN CONTACT:
The Magazine of Fantasy and Science Fiction,
April, I960. © I960 by Mercury Press, Inc.

OF ALL POSSIBLE WORLDS:
The Magazine of Fantasy and Science Fiction,
February 1961. © 1960 by Mercury Press, Inc.

JUST A SUGGESTION:
The Magazine of Fantasy and Science Fiction,
August, 1960. © I960 by Mercury Press, Inc.

Contents
Publisher’s Preface to the Paperback Edition
Preface to the eBook Edition
Lost in Translation
Step IV
A Little Human Contact
Signs of the Times
Of All Possible Worlds
Just a Suggestion
Save Your Confederate Money, Boys
Visiting Professor
Car Pool
Fruiting Body
Smith’s Revenge
The Devaluation of the Symbol
______

Publisher’s Preface to the Paperback Edition

when words like space-probe and moon-flight (not to say megadeath and overkill) are common, household terms, it is very refreshing indeed to find a science fiction writer whose primary concern is human beings.

Here you will find people dealing with the common, household problems of how a girl can maintain the proper moral front while secretly living a joyous life of sin, keeping up with the Jones’s, car pools, the pitiless omnipresence of small children, love and war between man and woman‌—‌and many other readily recognizable joys of living‌—‌even if the
methods
of dealing with them are a bit peculiar.

While it would be going too far to claim that this little volume is a handy reference guide to positive thinking (we are mot sure the author would be in favor of positive thinking anyway) still the fact remains that reading Rosel George Brown is itself a contribution to feeling better about things in general.

Preface to the eBook Edition

Rosel George Brown was born in 1926 and died tragically young at the age of 41. She lived most of her life in New Orleans and studied at Sophie Newcomb College and the University of Minnesota, receiving her M.A. in ancient Greek. After receiving her degree she returned to New Orleans, where she lived with her husband, historian W. Burlie Brown.

Brown began publishing science fiction stories in September 1958. Some of her stories had themes that were typical of “women’s” science fiction of the period, but she had a broad range, writing stories of interplanetary exploration, social satire, time travel, biological experimentation, and more. Most of the stories in this collection have some element of humor, but as funny as she is in delightful stories like “Lost in Translation” and “Save Your Confederate Money, Boys”, she could also be quite dark, as in “Step IV”, or melancholic and dream-like, as in “Of All Possible Worlds”.

An illustration for “Save Your Confederate Money, Boys” from Fantastic Universe, November 1959. Artist Virgil Finlay.

Brown’s writing was characterized by its wit, its fine craftsmanship, and by the depth and care with which she would draw her characters’ personalities‌—‌something that was rare in the action- and idea-oriented science fiction of her time.

In addition to 21 published short stories, Brown wrote two novels:
Sibyl Sue Blue
(1966) and
The Waters of Centaurus
(posthumously published in 1970). She also collaborated with Keith Laumer on the novel
Earthblood
(1966; currently available in the book
Earthblood and Other Stories
, 2008).

As is mentioned on the cover, the story collection
A Handful of Time
was Brown’s first appearance in book form, and it brings together much of her early work.

This eBook edition has been created in hopes of introducing a few more readers to this excellent and little-known science fiction author.

M
ERCEDES HAD
particularly preserved her chastity, as her adenoids, out of intellectual conviction. The difference was that she
had
had an opportunity to be rid of her adenoids. There was nothing conventional about Mercedes, for that matter. When other girls were out experimenting with hashish, and swimming naked in mixed groups, Mercedes reclined neurasthenically on her violet plush sofa, reading the
Bifurcate Review.
In her adenoidal way, she was a Humanist, a Classicist, and a Graecophile (in translation, of course). As a further refinement, she read only Victorian translations from the Greek, a matter of keeping in step with the
avant-garde
neo-Victorian revival.

When the doorbell chimed “Home Sweet Home,” Mercedes’ heart fluttered ominously. She was, she thought palely, so very delicate. She passed a small bottle of sal volatile under her nose, and placed an embroidered bookmark between the pages of her Aristophanes before closing it reluctantly. Such delightful humor! The fact that she actually didn’t get any of the jokes was of course because So Much Is Lost in Translation.

There was a discreet knock at the door and Thomas, in faultless butler’s attire, walked in carrying a silver salver. Mercedes frowned at Thomas’ creaking walk, conscious that she had been putting off the indelicate and really repulsive task of oiling him. Thomas, eyes shifting in embarrassment at his irrepressible squeaks, presented the salver on which rested, as usual, nothing.

“The
gentleman”
Thomas said with a rusty sniff, “said he had no card.”

“A man?” Mercedes asked rhetorically. “Very well. I guess you may show him in.” She moved to the red velvet, rose-carved chair where the tapestried bellpull and a heavy bronze paperweight were near at hand.

Thomas opened the door to admit a fresh-faced young man that looked like one of her father’s graduate students.

“My name is Kim,” he said heartily, coming toward her with his hand extended. He stopped in midpassage and colored slightly as he looked around the room, and did a double-take on Mercedes’ horn-rimmed glasses. He was dressed in the Ivy League loincloth and high boots, mementoes of a year at Harvard. He lowered his green bag to the floor and looked longingly at the enormous Chinese scarf which clothed the piano so modestly. He abandoned the idea, sank down in the Eastlake loveseat opposite Mercedes, and began to pluck nervously at the antimacassar.

“I have come to see you,” he said in hushed tones, “about a matter of‌—‌er‌—‌extreme delicacy.”

Mercedes flushed violently. She moved nearer the bell-pull and began to toy with the paperweight. “Mr. Brian… sir…” she began haltingly. “I don’t even know you. This matter of great delicacy‌—‌perhaps we had better speak of it at some more propitious moment I am not too well, you know.” Mercedes placed her hand on her fluttering heart.

Kim, who hadn’t read a Victorian novel since English II, responded tactlessly. “You’re healthy as a horse. I’ve just been over your medical.”

His gross brutality shocked Mercedes out of her impending swoon. “What’s this all about? What did you talk to my father about?” Had this coarse, working class type man gone over her medical report before… whatever he had in mind? She shuddered and calculated the thrust necessary to carry the paperweight from her hand to his head.

“I’m one of Jack’s‌—‌ah‌—‌Mr. King’s graduate students. We’ve been engaged in an experiment of great importance. It’s so important, in fact, and so secret, that only two people in the world know about it‌—‌your father and myself. We have reached the stage now where we need a vic… ah… a volunteer to test our hypothesis.”

“And you’re asking me… my own father…” Mercedes covered her face with her hands, overcome by the Horror of the Situation. She felt exactly like‌—‌who was it? Oh, yes‌—‌Dr. Rappacini’s daughter. She could feel the Forces of Evil closing in around her.

Kim took out a cigarette irritably, looked hopelessly for an ashtray and replaced the cigarette in his green bag. He leaned forward, right elbow on one knee, and grinned at Mercedes in the powerful, masculine way most women found irresistible.

“Let me at least tell you what the experiment is. You can faint after I’m finished. We have, we think, perfected a time machine. It works by a method of ‘jump grooving’ of instants, so that the subject is translated from one instant to another. In other words, if we send you back to, say, last Friday at three o’clock, the instant you arrive you create the existence you have come to observe, just as it actually was. It’s not in reality, if I may use the term, the same, but it’s
exactly
alike. Only, so to speak, in another groove. Except for the paradox. You wouldn’t meet yourself, because you aren’t there until you are translated there and create the moment.”

But Mercedes wasn’t listening. Her head was thrown back, waiting for the guillotine to fall.