Read A Highlander for Christmas Online

A Highlander for Christmas 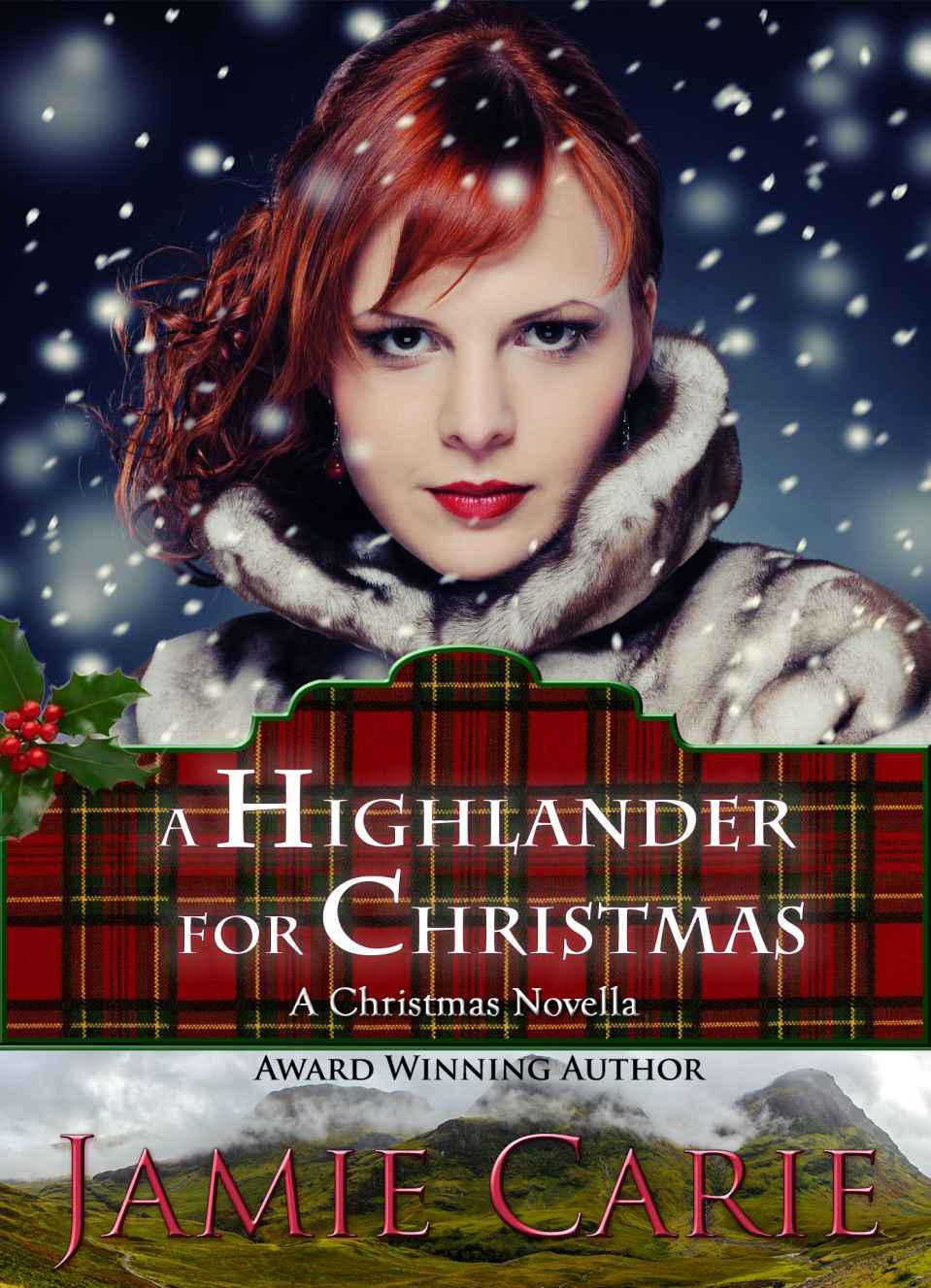 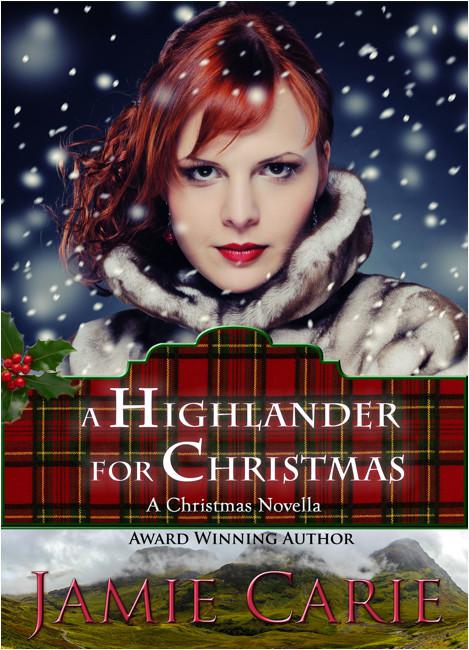 A Highlander
for
Christmas

Copyright © 2013 by Jamie Carie Masopust
All rights reserved.
Printed in the United States of America

Author’s Note: This novel is a work of fiction. Names, characters, places, and incidents are either products of the author’s imagination or used fictitiously. All characters are fictional, and any similarity to people living or dead is purely coincidental.

All rights reserved.
No part of this publication can be reproduced or transmitted in any form or by any means, electronic or mechanical, without permission in writing from Jamie Carie Masopust.

To my cousins, Stacey and Susie. You’ve shown such fortitude and grace in difficult times. May God bless you and keep you in his arms with all comfort and peace.

And to my Uncle Wayne Carie, you are greatly loved and missed.

The low drone of the bagpipes and rap of the drums sounded across the glen, meeting their traveling party minutes before the sights of the highland games came into view. Their large coach lumbered along the rutted road over dips and swells in the land that was becoming more mountainous and steep with every mile. The glen narrowed beneath the towering, moss-covered rock faces, giving way with each bend in the road to more of the breath-robbing beauty. It was hard to believe that each rotation of their carriage wheels brought them into further splendor, but it was true, a foreshadow of what heaven might be like.

Juliet Lindsay clung to the side of the sturdy vehicle, her face close to the window, wishing they would stop soon so that she could get out and really see the beauty surrounding them. Inside the carriage with her was her Uncle Clyde, Aunt Becca, cousin Fiona, and baby Lillian. There had been seven children born to her aunt and uncle, but only Fiona and now the new babe still breathed. Juliet shot a glance at the gurgling baby and hoped with all her heart that God’s will was to see Lillian survive infancy. God’s will made little sense to her—who lived and who died, who had success and who had failure, the pains of life—but she supposed she shouldn’t question Him over it. Just thinking of an all-powerful, all-knowing God made her turn her thoughts quickly away in fear. It was better not to think of Him at all.

The sounds of the bagpipes grew louder and joined with the sounds of shouting and cheering. Juliet’s lips turned up in excitement as they rounded another bend, and then there, lining either side of the glen, were the tents and the flags of the highland clans flapping in the wind. A hundred or more men in kilts wandered over the land, each bearing their tartans, many practicing with long poles, hammers and stones.

“Ah, lassies, ’tis a beautiful place, is it no’?” her uncle, a stout, vociferous man with wild gray hair, asked across from Juliet.

Juliet nodded, a knot in her throat preventing her from speech. Her gaze traveled like a hungry person starved for such beauty, up the sides of the moss-covered mountains, past a winsome waterfall to the rocky peaks—three of them.

“That’s the three sisters, it is.” Her uncle pointed toward the three mountains. “They’ve a mist hovering about them most the time, I suspect.”

“Can we stop, please?” Fiona strained to see around Juliet.

“Only another moment, lass.” Her uncle chuckled. “See that tent there? The large one with the dark red tartan a-wavin’?”

The girls nodded and Aunt Becca leaned toward her side of the window to see as well.

“Which you’re not,” Aunt Becca interjected with a frown.

Uncle Clyde cleared his throat. “That’s so, that’s so. But if I was, I would put me money on MacLeon. Keep an eye out for ’em, lassies. And mark my words, why—”

“They’ll do well to keep away from the competitors. Och, such young and pretty girls.” Aunt Becca shook her head in worriment. “I’m not sure why I let you talk me into bringing us all along.”

Aunt Becca cracked a smile. “I suppose not. I well remember my first games.” Her eyes glassed over with the memory and a soft smile played on her lips, making Juliet wonder what she was thinking about. Aunt Becca reached over, patted Juliet’s knee and winked at her, as if reading her thoughts. “’Tis hard to believe the summer is gone from us and you will be returning home soon.”

Juliet nodded, her heart sinking just thinking about it. Fiona’s family had a far more warm and relaxed household than her own. There had been daily horseback riding over the rolling hills no matter the weather, helping with the household chores and caring for baby Lillian, the Scottish feasts and dances that lasted far into the night and then this—the highlight of her visit, the spectacular highland games. Her time with this happy and boisterous family had gone by so quickly, had been so wonderfully refreshing, especially after her disastrous London season. She pressed her forehead against the window, seeing the breathtaking valley where they would pitch their tent, and acknowledged that she dreaded returning home.

Juliet felt her cheeks warm at the thought of the “devastation,” as her mother icily referred to it, that she had caused her family. How could a grown woman of twenty full years be so foolish? Had they taught her nothing? No man would have her now, didn’t she know? After the raging and shrill arguments they had packed her off to her father’s younger brother, chief of the small Erskine Clan, just north of Stirling Castle, for a chance to see how those not so fortunate as they lived. Her mother always referred to the highland people as barbarians, but what her mother hadn’t foreseen was that Juliet would fall completely in love with her Scottish relatives and their beautiful highlands and that she would not want to ever return to Eden Place in Northumberland.

Eden Place. There was little of the Garden of Eden in the cold, windswept, barren land of her father’s inheritance. As first-born son, he had inherited the English title of Earl of Wright, Baron Lindsay, with lands in northern Northumberland, but his younger brother, Clyde Lindsay, had managed to keep the chieftain title to their Scottish relations with the Clan of Erskine. Juliet wished she had been born on the Scottish side of the blanket.

“You stay together, my girls, and out of the men’s way, and all shall be well.” Her aunt was continuing to speak.

Juliet nodded in agreement. After what had happened in the garden outside a ballroom in London she would be careful not to be alone with a man until she was wed, if that blessed event ever occurred.

The carriage came to a halt just beyond the MacLeon tents. Their own tents would be set up nearby, but there were no flags or tartans to mark them, as Uncle Clyde’s clan wasn’t participating in the games this year, only watching. He’d bemoaned the fact that he hadn’t a son nor a champion worthy, but had told many a tale about the times in which they had competed during the long journey to the glen.

Juliet stepped out of the carriage and took a long, deep breath of sweet-smelling air. She took a few steps toward the edge of the road, which was little more than a two-wheeled path in the dirt, to where there was a long, grassy drop-off that led deeper into the glen. A stream meandered at the lowest point, with a field of ferns to her left as far as she could see. In front of her and farther down, the ferns gave way to moss-covered, rocky earth and then a wide, trickling stream. On the other side of the stream the rock climbed up and up toward the Three Sisters Mountains that her uncle had pointed out in the coach. They rose into the clouds, three points of rock face coming in and out of the hovering mists. The mists moved over the tops of the three mountains with the cold breeze, giving her glimpses of their peaks.

Juliet nodded, the awe of the place making an ache in her chest. “The grandest thing I’ve ever seen.”

“There was a terrible massacre here a few years back, can you believe? It dinnae seem possible to me.”

“The Clan MacDonald held land here, in Glencoe. They’d been tardy in pledging their allegiance to William and Mary, so the Earl of Argyll sent his troops, led by the Clan Campbell of Glenlyon, to pay them a call. They stayed a fortnight on the MacDonalds’ hospitality, eatin’ and drinkin’ and having a grand time, and then suddenly they turned on them. Attacked them in their beds and murdered thirty-eight men.”

The injustice of it made a flare of anger rise in Juliet’s chest. “How horrible. Just for being tardy? Did they mean to pledge their allegiance?” Juliet looked at the rising mountain terrain and imagined the people trying to flee.

“I dinnae ken that any of the clans wanted to pledge to the English, but they had little choice and they knew it. The worst of it is that the soldiers left the women and children to die from the harsh elements.” Fiona looked around them as the wind gusted through their hair, and shivered. “The games are here this year to try and restore the goodness of the land.”

Juliet thought she could understand that. It was a place to be revered, not sullied by such brutality and bloodshed.

A sudden bellow and then roaring cheers had them turning around toward the wide part of the glen below. A man, shirtless aside from the upper drape of his tartan over one shoulder, his chest heavily muscled, his stance exuding power, stood a head above those around him. He took up a huge object, made a circle and then a lunge and thrust it into the sky. It had a long wooden handle with an iron ball at one end. It flew through the air with the cheers of the crowd and landed halfway down the glen beyond Juliet’s sight.

The man turned around, toward them, with a fist upraised, a grin splitting his ruggedly handsome face, his eyes alight with a fierce sort of victory. Those eyes, so far and yet close enough to make out, scanned past Juliet and Fiona standing above him on the ridge of the road. His gaze swung past them and then came back with sudden determined intent. Juliet gulped. He was staring right at her.

Fiona nodded, her voice quiet with awe. “The MacLeon. And he’s looking right at you, he is.”

“Oh dear. What shall I do? Shall I wave? Curtsey?”

Fiona laughed. The bagpipes started up again with a jaunty tune and then the clouds above the MacLeon’s head parted, the sun sending a shaft of pure light to bathe him with brightness.

Juliet could only stare and hope her mouth wasn’t gaping open. She shut it with a snap and raised her chin, her gaze locked with his.

His mouth turned up in a one-sided grin filled with boyish charm, and his eyes grew mirthful yet intent. He bowed his head toward her and then turned his attention back toward the games.

“Now I ken why my mother wasnae so happy we were so closely situated to the MacLeon tents.” Fiona laughed and squeezed Juliet’s hand. “Did she mention that the MacLeon Chief isnae yet married?