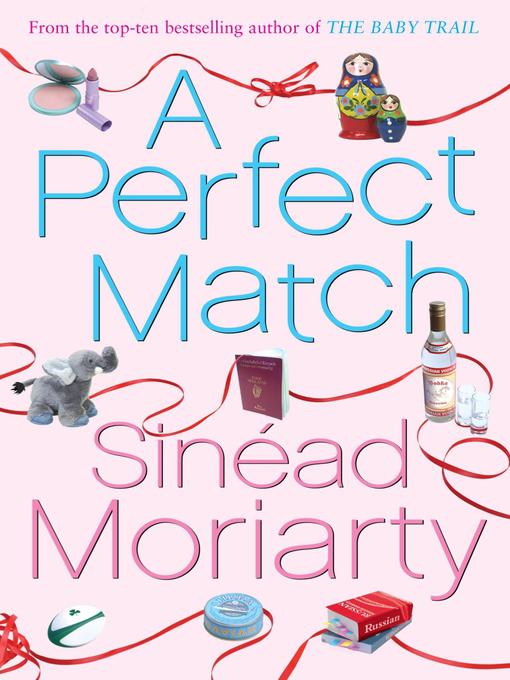 Sinéad Moriarty lives in Dublin with her husband and their baby son.
A Perfect Match
is her second novel.

For Mum and Dad

Hi, my name’s Emma. I’m a thirty-five-year-old make-up artist. Three years ago I married James. Things were going swimmingly in our ‘happy ever after’ marriage until we decided to try to have a baby.

That was two years ago. Since then I’ve attempted post-sex handstands, headstands and any other upside-down positions I could conjure up; spent hours with my legs in stirrups being prodded internally by all manner of specialists; taken mountains of hormone-inducing drugs, and had one failed IVF attempt – and I’m still not bloody pregnant.

I have to admit that I’ve been a bit obsessed about it – completely and utterly manic to be precise. I’ve realized that I’m driving myself and everyone around me insane, so I’ve made the decision to stop all treatment and go down the adoption route. James has agreed to it – after a small amount of arm-twisting – and we are now embarking on this, phase two, of attempting to become parents.

Adopting a baby is the perfect solution to our problems. And
it’s bound to be much easier than the natural route … isn’t it?

I woke up this morning without a pit in my stomach. It felt fantastic. My first thought wasn’t – What day is it in my cycle?’ or ‘What injections, hormones or tests do I have to take today?’ Nor did I have to worry about having sex. I realize this may sound odd, but, believe me, having to have sex every month on day eight, ten, twelve, fourteen, sixteen and eighteen of your cycle, with a couple of extra rides thrown in to be on the safe side, is not all that much fun. I like spontaneity – who doesn’t? – and trying to get pregnant destroys that.

Now that we were going to adopt, I was looking forward to getting back to a spontaneous sex life that wasn’t ruled by my temperature and didn’t end up with me standing on my head for twenty minutes in a lame attempt to aid the sperm by adding my own version of gravity to the equation.

I looked over at James who was heading out to the shower.

‘What?’ he said, looking around suspiciously.

‘Thank you, darling,’ said James, grinning at me. ‘It’s wonderful for a man to have his wife’s blessing to play with himself. I may be a while.’

I went downstairs to make breakfast. I was feeling very Doris Dayesque as I whisked the eggs and fried the sausages. This was a new day. A fresh beginning. I had a really good feeling about it. No more stress about trying to get pregnant. No more doctors and hospitals and drugs. We were going to adopt. We were going to give a child a happy home. I pictured some poor little mite in a war-torn country gazing at me through the bars of her iron cot. Dressed in rags she looked up at me, her huge blue eyes begging me to take her away to a safe, warm place. I bent down to hold her hand and, slowly, she began to smile at me, her pinched little face lighting up.

‘That’s the first time Svetlana has ever smiled,’ gasped the director of the orphanage. I beamed back at the beautiful little girl. I was special, she was special. We were made for each other.

I imagined James holding Svetlana in his arms as we burst through the arrivals gate in the airport. Our families, gathered to greet us, were holding ‘Welcome home, Svetlana’ banners and big red ‘Congratulations!’ balloons. I saw them ‘oohing’ and ‘aahing’ when they first met our beautiful, smiling daughter. James and I beamed at each other, proud parents at last. Fast-forwarding twenty years, I saw myself cheering as Svetlana won the best actress award at the Oscars for her portrayal of a deaf musician fighting against the odds to become a world-class pianist. In her acceptance speech she thanked everyone and then, pausing for maximum effect, she said, ‘But most of all I want to thank my mother for saving my life. If it wasn’t for her, I wouldn’t be here today. This Oscar is for you, Mum, you are the person I love and admire most in the world. I owe everything to you …’ I nodded and bowed my head as the audience rose to its feet to applaud me.

‘Emma, what on earth are you doing? The sausages are burning.’ James pushed me aside and pulled the pan off the hob, staring at his blackened breakfast. ‘Are you all right? What’s going on?’

‘Nothing,’ I snapped, embarrassed at being caught bowing and waving to the cream of Hollywood.

James shrugged and took over the cooking. He was well used to finding me daydreaming. When he was halfway through his scrambled eggs and burnt sausages, I announced that I was going to call the adoption people.

‘Yes, today. No point in wasting any more time. We might as well get going.’

‘OK, well, will you get them to send us out all the relevant information so we can go through it before making the final decision?’

‘What do you mean, final decision?’

‘I’d just like to know a bit more about the process before plunging in, that’s all.’

James had been a bit reluctant at first about the whole adoption thing. He was worried about the child’s medical history, its family medical history, abuse, Aids … But I said that everything was a leap of faith. Having kids of your own was scary too. Then I brought up his mad uncle Harry who had a fetish for exposing himself to people, but had three sons who were completely normal and well-balanced. Who could tell what genes and mental or medical foibles were going to be passed down? It was unknown and mostly inexplicable territory, but we couldn’t live our lives in fear. After much discussion and debate, James had agreed to the adoption, so I was none too pleased with this ‘final decision’ comment.

‘James,’ I said, trying to be patient, ‘we discussed this – at length. We agreed to go ahead with it. I’m not ringing up to ask for an information pack, I’m calling to put our names down on the list.’

‘All right, fine, but will you ask them to send us some guidelines. I just don’t think it’s as straightforward as you seem to think it is.’

‘Don’t be silly, every time you turn on the TV there are orphaned children staring out at you, desperate for good homes. Besides, after the last two years, it’ll be a piece of cake,’ I said, brimming with confidence. There was no way this could be more difficult than trying to get pregnant. Adoption was going to be a walk in the park compared to that. I couldn’t wait to get started.

Later that day when James had gone off to training, I called the Adoption Board. James had been promoted from assistant coach to manager and head coach of the Leinster rugby team, so he was putting in even more time at work. Leinster had lost in the semi-final of the European Cup to Toulouse the year before and James had gone into mourning for weeks. So he was determined to win the Cup this year and was giving the team his undivided attention. I just hoped his training schedule wasn’t going to clash with our adoption schedule.

‘Hello,’ snapped a grouchy voice at the end of the phone.

‘Oh, hello, I’m ringing to adopt a baby,’ I announced.

The woman sighed, ‘Hold the line.’

‘Yes, hello, I would like to adopt a baby, please.’

‘Have you filled out the Intercountry Adoption Form?’

‘The form. Have you filled it out?’

‘No, I haven’t filled out anything,’ I said, beginning to feel a bit grumpy myself. What was wrong with these women? Why were they being so rude? And what on earth did she mean by Intercountry? Maybe I had misheard and she meant Intercounty. Yes, that must be it; she needed to know what county I was from in Ireland.

‘I need your address so I can send you the Intercountry Adoption Form.’

‘Did you say Inter
county?
’

‘No, dear, I said Inter
country.
As in Ireland and China – not Dublin and Cork.’

‘But why would I want one of those forms? Isn’t it easier and quicker to get an Irish baby? There must be hundreds of young teenage mothers who give up their babies for adoption.’

The woman snorted. ‘Single mothers, give up their babies? Where have you been for the last ten years? Irish baby, ha ha, that’s the best I ever heard.’

I was now really angry. How dare this old boot laugh at me? Sure, I had fantasized about adopting a child from a war-torn country, but realistically it’d be a lot easier and a lot less hassle to get a local baby.

‘So what are you saying – I can’t adopt an Irish child?’

‘There are no Irish babies up for adoption. There were four in total last year. Four in the whole country and we have thousands of parents looking to adopt and a huge backlog. Intercountry is the only option. Do you want a form sent out or not?’

I gave her my address and hung up. I was reeling. Four Irish babies in the whole country! A huge backlog of parents with the only option being Intercountry. What did that mean? How big was the backlog? What countries were involved in Intercountry? Did it include England? With James being English, maybe we’d have a good chance of getting an English baby. But if the single mothers in Ireland were keeping their babies, the single mothers in England were probably doing the same.

I had imagined I’d ring up and they’d say, ‘Thank you for calling. What a wonderful person you must be to want to adopt a child. When can we meet you? We have hundreds of children waiting to be placed …’ I never imagined I’d be barked at, laughed at and then hustled off the phone.

As I sat there lurching between wanting to cry and wanting to call back and tell the woman exactly what I thought of her and her attitude, the phone rang. It was my mother.

Nebula Awards Showcase 2008 by Bova, Ben
Temple of the Winds by Terry Goodkind
Too Many Cooks by Joanne Pence
The Airship Aurelia (The Aurelian Archives) by Powers, Courtney Grace
Vampire Academy: The Complete Collection: 1/6 by Mead, Richelle
Alone by Richard E. Byrd
To Be Seduced by Ann Stephens
The Love-Haight Case Files by Jean Rabe, Donald J. Bingle
The Voice of the Night by Dean Koontz
This Was Tomorrow by Elswyth Thane