Read A Rush to Violence Online

A Rush to Violence 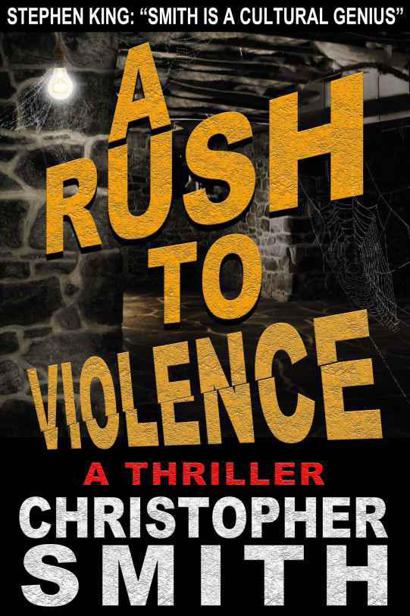 A Rush to Violence

**STEPHEN KING ON CHRISTOPHER SMITH: "Put me down as an enthusiastic Christopher Smith fan. Smith is a cultural genius."**

**From the #1 International Best-selling author of "Fifth Avenue" comes Smith's best thriller yet!  91,000 words or about 310 printed pages!**

The suspects? Six of his seven children, all so desperate for their father's money, they'd kill for it.

His seventh child, Camille, a former assassin who left that life behind to raise her now sixteen-year-old daughter Emma, must tap into old instincts to learn who killed her father and why. What she never sees coming are Emma's plans to go into Manhattan and find out on her own.

Meanwhile, Camille must be found. Private investigator Marty Spellman is threatened by a mysterious man to find her. He has seventy-two hours or do so--or members of his own family die.

Over the course of one day, Spellman, Camille, Emma and Spellman's own fifteen-year-old daughter, Beth, must intervene to finish this and shut it down. Twists abound. Few are who they appear to be. Soon, all parties are in a rush to violence, but in spite of how quickly they act, it's clear that no one is safe.

****JIM ASHLEY ON FIFTH AVENUE AND RUNNING OF THE BULLS****

**Smith is this generation's Master storyteller. **If you're a fan of suspense thrillers and unbelievable twists and turns, you will quickly become a fan of Christopher Smith! He entices you to fall in love with his characters only to be caught totally off guard when their fate goes in a direction you never saw coming. He takes the styles of James Patterson and Steven King to a totally kicking level. I can honestly say that I spent way too many late night hours reading chapters because I could not put it down and couldn't wait to see what he would do next. Starting with Fifth Avenue, he builds such entertaining and deep characters that you know this cannot be the end but just the start to future stories interweaving these strong individuals. With Running of the Bulls, you're so caught in the action - that you're honestly rooting for the characters that would historically be the bad guys in other tales. Christopher seems to set the bar higher and higher for himself, and I can't wait for his upcoming releases in 2012. A definite must read for mystery, suspense, and thriller lovers!

"Fifth Avenue, the first novel by penned Christopher Smith, is a fantastic first effort and was the reason I was simply unable to put my Kindle down over this Christmas period. And I would go as far to say that it ranks as one of the best first novels I've ever read."--PLANET KINDLE

"Fifth Avenue. A big, big novel. A blockbuster? Yes. A bestseller. It should be. The author, at the beginning of the novel, thanks the people who introduced him to the 'real' Fifth Avenue. I suspect the real one could not be as interesting or engrossing as this novel. ...This is a highly recommended novel. It deserves the five stars." -- P.M. RICHTER

"Christopher Smith did it again. This book is packed with suspense, and delivers both characters that you will love and loathe. A time or two near the end, I found myself actually on the side of the villains and I really hope those two show up in Park Avenue. The story moves quickly...as most of the action all happens in one day. Makes it terribly difficult to put down. Smith paints a great picture of every character- I found myself chuckling aloud a time or two. Well written, well planned- I am definitely going to be reading more from this author. Can't wait for Park Avenue!" --JENNIFER LONG

**JOIN CHRISTOPHER ON FACEBOOK AND INTERACT WITH HIM:** **on.fb.me/FQ2MuT**

** **"This crime thriller is a fast-paced and engaging read. ... The narrative kept me on the edge of my seat and I really couldn't predict what was going to happen next.** **... The pace never flagged. ... The central characters of Camille, Sam, Emma, Marty and Jennifer are nuanced and very true-to-life. Although theirs is an unusual life lived at a hectic pace, I found myself developing real empathy for their plight and always felt that they were--despite their unusual life choices or circumstances--genuine, well-meaning and real people. The Miller clan and their acquaintances were exceptionally well drawn, alternating between petty pragmatism, shameless snobbery, greed and a perverse noblesse oblige. I particularly enjoyed the humorous and biting portrayals of Camille's siblings...top-notch dialogue and quirky characterizations." --Kirkus Editorial**
** **
** *

**"Another smash by Christopher Smith! He is definitely becoming the next "Can't Wait For the Next One!" storyteller. Starting from the first page, he takes you on a thrill ride you can't wait to get on but are anxious about what's around the next page. You never know what you're going to get hit with next. You just know you're always in for a wild time. As with his other stories, you just don't know what's up ahead. Time after time, you get hit with a shocker that makes you say, "NO, that did not just happen." You will not be disappointed. A great read! The title definitely foreshadows that you're in for a RUSH of adrenaline to the end. After you hit that final page, your mind will be reeling and you'll be begging for the next book by Smith.  --Jim Ashley***

Any trademarks, service marks, product names or named features are assumed to be the property of their respective owners, and are used only for reference. There is no implied endorsement if we use one of these terms. No part of this book may be reproduced in any form by any electronic or mechanical means (including photocopying, recording, or information storage and retrieval) without permission in writing from the author.

This is a work of fiction. Any similarity to persons living or dead (unless explicitly noted) is merely coincidental. Copyright © 2012 Christopher Smith. All rights reserved worldwide.

The author also would like to thank his readers, who are the lifeblood of his work. Thank you for your patience and your incredible support. You are the first and last reason for every early morning and late night. I appreciate all of you more than you know. And I’ll see you on
Facebook
.

The author also would like to thank the Amazon team; his friends, Ted Adams and Bari Khan, for exposing him to the darker side of Manhattan, even if they didn’t know they were doing so at the time; to those other unnamed men and women who introduced the author to the real Manhattan while he researched this book; and to friends, old and new, all of whom either helped to shape this book or who offered support as it was written.

In the United States and Canada

Running of the Bulls
: Book Two

From Manhattan with Love
: Novella Three

In the United Kingdom

Running of the Bulls
: Book Two

From Manhattan with Love
: Novella Three