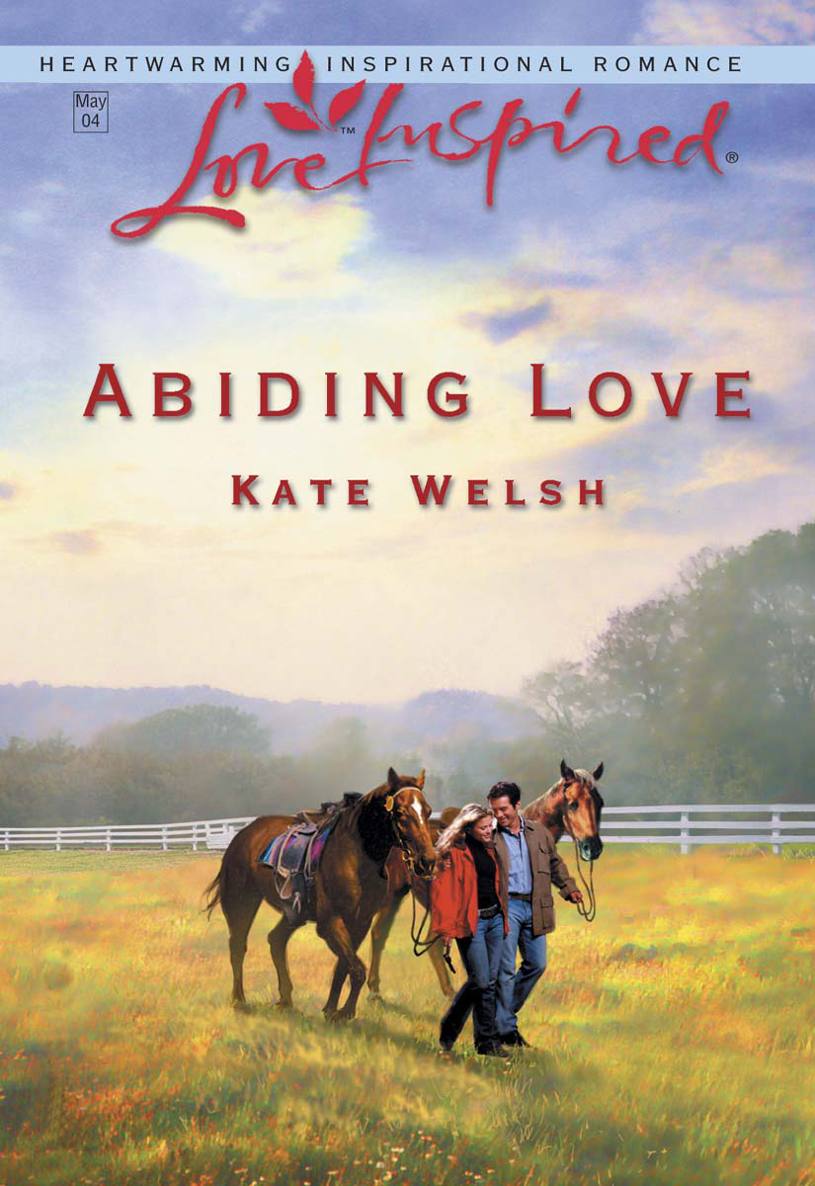 Adam knew that the joy he felt came from watching her.

Alexandra popped into his thoughts constantly. And now she seemed to eye him carefully, as if weighing whether to wade into dangerous waters.

“Are you as hard on your son as you are on yourself?” she asked.

He frowned and searched his recent memory. “No, I’m not. I know he’s grieving and acting out because of it. I appreciate your kindness and all you’ve done for him. So, can we effect a truce between us?”

She looked down and flicked at a splatter of mud on her thigh. When she looked back up, the sun sparkled in her eyes.

“A truce would be good,” she said.

He reached out to shake her hand, thinking to seal the deal, but it felt as if he might have sealed his fate instead. Because the feel of her small, soft hand sliding into his short-circuited whatever was left of his brain.

A Family for Christmas
#83

is a two-time winner of Romance Writers of America’s coveted Golden Heart
®
Award and a finalist for RWA’s RITA
®
Award in 1999. Kate lives in Havertown, Pennsylvania, with her husband of over thirty years. When not at work in her home office, creating stories and the characters that populate them, Kate fills her time in other creative outlets. There are few crafts she hasn’t tried at least once, or a sewing project that hasn’t been a delicious temptation. Those ideas she can’t resist grace her home or those of friends and family.

As a child she often lost herself in creating make-believe worlds and happily-ever-after tales. Kate turned back to creating happy endings when her husband challenged her to write down the stories in her head. With Jesus so much a part of her life, Kate found it natural to incorporate Him into her writing. Her goal is to entertain her readers with wholesome stories of the love between two people the Lord has brought together and to teach His truth while she entertains.

Therefore, if anyone is in Christ, he is a new
creation; old things have passed away; behold,
all things have become new.

For Bobbie.
Thanks for all the long talks
and caring concern through the years,
your cha-chink comments that bring such clarity
to situations and mostly the laughs. You enrich
my life and writing with your friendship.

The characters in this book came to me slowly as the LAUREL GLEN series unfolded. It soon became apparent that the long-lost brother of a wounded girl and the sister of the guilty party had to meet. They had a million reasons to hate and distrust each other—and a million and one to fall in love. Courage and love can be born in anyone, and Jesus will save all who answer His call. This is a story that examines courage and the perceptions we have of what it means to be brave.

I’ve also dealt with divorce in this book and did so with a great deal of thought, prayer and research. It is a subject that often divides the church—rightly and wrongly. Divorce is a step that should never be taken lightly, and as Pastor Jim points out, should be examined on a case-by-case basis. But the truth is that only three people know if so drastic a step is justified—those directly involved and the Lord. I will always believe that it is incumbent upon the body of Christ to leave judgment to God and treat one another in love. There is an old saying that we should not judge others until we have walked a mile in their shoes. Since we mortals can never do that, perhaps we should just leave all such judgments to the Lord.

In August 2004, LAUREL GLEN will be back with the much anticipated match of Meg Taggert and Evan Alton, the man who raised her child. These two stubborn people will learn that they can find common ground and love at long last. Watch for the fireworks these two create!

“T
his is it, Xandra, old girl. 245 Hollow Stump Lane,” Alexandra whispered hoarsely into the still, fall night. She wasn’t old, of course. Just thirty-two. But she felt twice that as she stood in the moonlight-dappled shadow of a huge oak tree, tired to the bone.

Sighing, she leaned against the tree, chilled by the fall freeze, her light denim jacket affording little protection from the wind. She gazed up at the house she’d walked miles to reach. The lights were on inside the big old stone Victorian. All and all, it looked like a nice place to live. It looked safe.

Maybe her long journey home was over.

“We tend to call the police when we find someone skulking around in the dark,” a disembodied female voice said from the top of the porch steps.

Xandra closed her eyes, fighting tears. She knew that voice. Did she live under a dark star? How could
the one woman who could help her turn out to be the one woman in the world with the most reason to laugh in her face? The sad thing was, because she’d let herself be such a coward all these years, she knew she deserved no better.

Swinging her nearly empty backpack onto her shoulder, Xandra stepped out into the light of the full moon. Elizabeth Boyer was more likely to spit on her than help her, but she had nothing left to lose. She was on foot in rural Chester County. Her pockets were empty but for a couple of dollars and change. She wore thrift store clothes and used sneakers. She’d slept in homeless shelters, on buses, in train stations for months. And Michael had beaten and frightened any Lexington pride out of her a year before that.

“A woman gave me this address. This is New Life Inn, isn’t it?”

The disbelief in Elizabeth’s voice wasn’t new to Xandra. She’d heard that same disbelief in the voices of the police officers back in California who’d responded to her 911 calls. Most recently she’d heard it from her own mother when she’d shown up at her childhood home a few hours ago, only to be turned away.

Michael Balfour was a saint—a blameless saint—according to her mother and the rest of the world. Her husband was frantic, she’d told Xandra. He had been for the months it had taken her to make her way home to Pennsylvania. He’d spent a fortune on detectives trying to find her. Oh, and Xandra was apparently
“delusional” now. She needed to go back home. Michael would get her the help she seemed to need. They would book the flight back to the prison of her husband’s Northern California vineyard. But no. They couldn’t, in good conscience, help her in any other way. After all, Michael would never forgive them if they made it too easy for her to remain apart from him.

“Alexandra Lexington Balfour, actually,” she admitted now to Elizabeth. And it
was
an admission. Both her surnames brought her only shame before this courageous woman.

“I can’t believe you’d come here,” Elizabeth snapped. “Hasn’t your family punished me enough for something that wasn’t my fault? The women living here deserve peace. Take potshots at me in public all you want, but leave New Life Inn out of it.”

“Causing you one more minute of undeserved pain is the last thing I want,” Xandra said quietly. “Elizabeth, please. The only reason I’m here is for help, just like those women inside. And I need help for the same reason they do.” She hated that her voice shook with exhaustion. With desperation. With fear. “I’ve walked at least ten miles today, and I’m not sure I can get all the way back to town again. I’m just about out of cash. I’m two dollars and twenty-seven cents from having no options at all.”

Elizabeth’s turnaround was instantaneous. “Of course we’ll help you, Alexandra,” she said, rushing down the steps, nothing but kindness in her tone now.

Xandra’s rubbery legs just about went liquid be
neath her and she lost her long-fought battle with tears. When she’d boarded a bus at dawn two months earlier in the small Northern California town of Summit Falls, she had sworn she’d shed her last tear over Michael Balfour.

“I’m not crying over him,” she told Elizabeth, who was now supporting her with an arm around her waist. “It’s just that I thought they’d side with me this time.”

Elizabeth sighed. “We certainly hit the jackpot when parents were assigned, didn’t we?”

Xandra huffed out a breath and stared into the kind eyes of Elizabeth Boyer. “You should have pressed charges against Jason. My brother deserved to go to prison for rape. He was a mean and violent boy who grew into a monster. I’m sorry for what he did to you. I’m sorry for what
we
did afterward.”

Elizabeth tilted her head, her long blond hair shimmering in the moonlight. “If I remember every nasty encounter correctly over the years, you always stayed silent. I saw you as your mother’s supporter, but you were really just standing there, right?”

“Sometimes silence isn’t always golden. I found that out the hard way in a town my husband—” Xandra closed her eyes, shook her head and corrected herself. They were the hardest words she would ever speak but she forced herself to say them aloud to Elizabeth. “No…my abuser. In the town my
abuser
owned.”

Elizabeth smiled kindly. “You’re going to be fine, Alexandra. You’ve already taken several very important steps that take a lot of women too many years to make. Welcome to a new life.”

Bitter Eden: A Novel by Tatamkhulu Afrika
Chilly Scenes of Winter by Ann Beattie
Supernatural Enforcement Bureau, Book 1, The Dragon and The Vampire: Book 1 by A K Michaels
The Tournament at Gorlan by John A. Flanagan
Beautiful Music by DeVore, Lisa
The Boy in the Burning House by Tim Wynne-Jones
Shaken Not Stirred (Mixology) by Alyssa Rose Ivy
Say You're Sorry by Michael Robotham
Breathing Underwater by Julia Green
Little Foxes by Michael Morpurgo