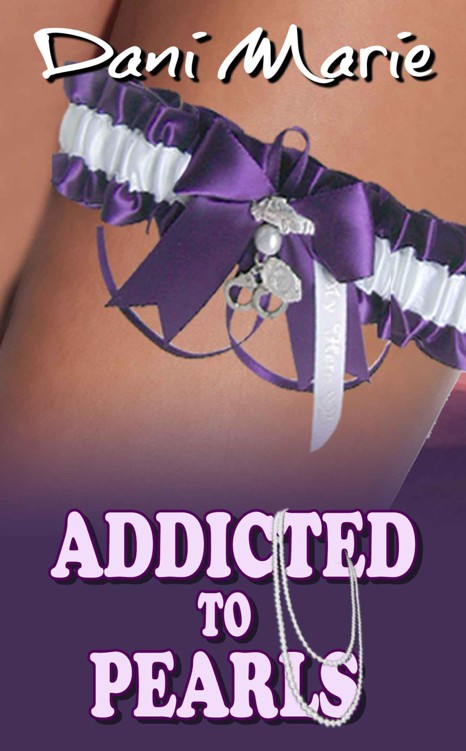 Copyright @ 201
2
by
DaniMarie
All rights reserved.  No part of this book may be reproduced, scanned, or distributed in any printed or electronic form without permission.  Please do not participate in or encourage piracy of copyrighted materials in violation of the author’s rights.  Purchase only authorized editions.

This book is dedicated to my entire family.

Thank you for encouraging me, pushing me and for those who were willing to skip the naughty bits. I couldn’t have done it without your support.

His hands were strong and rough from work but gentle as he slid them under her skirt lifting it and her.  She was braced against the wall, her arms around his neck,
fingers
in his hair as they kissed.  She wrapped her legs around him and he used one of those wicked hands to rip her panties from one side so
his talented
fingers could find her wet
center
.  She shivered as he pressed one then two fingers inside.  Her moan was caught in his kiss.  He would take her, here, now right against this wall in the court house where anyone could walk by and see them.  Neither cared, their need was too strong.

She startled then looked up at her co-worker and automatically handed the woman the file in question.  With barely a look the woman left without another word.  Tori couldn't believe she'd been day dreaming at work again.

Tori
Dell was bored, her life was boring and
she was boring.  She didn‘t want to be and she wasn’t going to continue to be
.  S
he knew deep in her heart that this was not
how her life was
supposed to be.  There was a real woman just waiting for the right moment to come out and play.  That moment had to be soon before she woke up one day and it was
too
late.    Those
erotic
books she had started reading were giving her tips and ideas on how to start.  She was ready to reach for the sky.  It would be hard in ways, living in a small town imposed its own limitations and Tori had been taught early on to conform.   She just had to
figure out how to
break the cycle.

Today, as she surveyed her office at the court house
,
she really wondered
why
she was waiting.  Watching police officers, lawyers and the ‘innocent until proven guilty crowd’ left her feeling restless and most definitely bored.  Tori was the court clerk and she did her job well.  Her quiet demeanor and unemotional effectiveness ensured that the officers didn’t tease her, the lawyers respected her and the defendants didn’t often try to treat her with disrespect.  This job wasn’t
how
she wanted to spend the rest of her working days.  There had to be something more
challenging,
fun and exciting than this.  It was like she was trying to break out of h
er own skin. B
ehind
her
unmoving bland expressions Tori was often laughing inside, or wanted to join in the
conversations around her.  S
he didn’t
though, so for years she
continued living in the shell of her current life.  Not for much longer though, she smiled thinking “I can’t wait to get started.”

Maybe it was her deep auburn hair
.
She
’d
read how wild and outrageous redheads were supposed to be.   Tori knew she had a good body, all those hours of trying to work out her frustrations
i
n her home gym had helped with that.   She wasn’t very tall, but she had curves in
all the right places, she’d never be long and lean like the models.   Her long curly hair would be an eye catcher if she ever wore it down instead of the tight bun she was always seen in.   With pale skin and no
make-up
, Tori felt as if she had no color and faded into the background of the world around her.   What Tori didn’t see was that her skin was flawless and she had a healthy look about her.

Tori pushed her black rimmed glasses back up her nose and sighed.  Her thoughts turned to things she wanted to do, the way she wanted
her life
to be.  The time of holding back was going to be over.
The stigma of how the Dell sisters, Tori and her older sister Lisa, were supposed to behave.
Th
e sister’s
lives were defined by their father
,
a pastor gone
bad
,
and mother that prized reputation over everything.  The girls had it drummed into
their heads
over and over to always consider what the rest of the community would think, say and how any action could harm their reputations.

Their Mom hadn’t always been so critical but when the scandal of their Dad running away with the church treasurer after a
yearlong
affair, Mom had changed.  It must have been a coping mechanism of some sort.  But from that day forward, no hint of scandal would be tolerated.

Tori’s Mom was very vocal about this and criticized the girls regularly for any perceived infraction.  Something as simple as a smile when a man was present was enough to earn an hour long lecture on the evils o
f
sinning.

So, Tori continued living the lie, aching to join in, but not quite able to.  To the world, she remained a woman that was very quiet and reserved.  She wore conservative out of date outfits that hid any idea of her shape and never a hint of romance, scandal or fun for that matter was associated to her
; o
ther than one tiny incident when she was younger that most
folks
didn’t remember at this point.  Men didn’t look at her
,
but past her, through her, never seeing the real person behind the persona.

Deep inside her, she had hopes and dreams of living a more exuberant life.  Tori wanted love and laughter, children and a husband that she could love with all her heart.   It was
as
if she was two separate people, the one the world saw and the one she was in her heart.  She kept her secrets at home, including
that
workout equipment hidden in a spare bedroom
,
and just two weeks ago her new contacts lens
es
had come in from the optometrist two towns over.   She read romance
and erotic
novels that she kept in a secret cupboard and had even watched movies that her Mother would be shocked to know she’d seen.   Tori had a second wardrobe she had recently been building.  Bright colors, jeans, form fitting tops, short skirts, thigh high boots and even a sexy little black dress that no one
had
ever s
een
her in.  What
would scandalize her Mother the most
was the drawer full of sexy, skimpy lingerie.  Not even her sister
(the person she was closest to in the world)
would have guessed what Tori wore under the conservative and baggy clothes.  She had fallen in love with all those matching panties and bra sets, camisoles and teddies in silks and satins.   Maybe buying those first few sets a couple months ago had sparked this urge to break out.

Some of Tori’s fear of town gossip came not just from her parents but from her first and only kiss.  As a young girl of 16, just coming into the swan from the ugly duckling stage, she hadn’t been ready for the day that escalated her fear of really living life.   That simple kiss taught her the value of what her mother had drummed into the girls.  One tentative kiss with, worldly by small town standards Brent, and Tori had become the gossip of Claytonville High School.  It was only one kiss and not all that memorable in Tori’s mind, but the ramifications had been astounding.

Her mother had ranted and prayed for hours for Tori’s
redemption
and the eyes of the community seemed to slice through her with condemnation.   She was taunted as easy and had endured the snickers and whispered hateful words from other teenage girls and the boys until they had grown tired after a week or so and moved on to the next sca
ndal.  The girls were the worst
since
they were
just starting to s
ee that she was going to be beautiful and felt threatened.  Those girls were viscous as only teenage girls can be.  She knew then, that her mother was right, anything that could be construed as gossip worthy must be avoided at all costs.   So she became more entrenched in her quiet lonely world.  The dowdy, reclusive Tori
was
born that day.   She hadn’t realized that she would be missing out on living when she had taken this path.

Lisa was even quieter than Tori, with a truly meek character that often drove Tori crazy.  Never a harsh word or thought, even just between the sisters was uttered by Lisa
, she
was stepped on and used by everyone.  She wore herself to a frazzle and no one even noticed.  So
Tori
just accepted that she had to hold all emotion in, keep her wants and needs to herself.  It became natural for Tori to hide and shut herself off from the world, even
,
or maybe especially
,
her family.

Tori wanted to
be confident
, to show off the body she’d worked so diligently and secretively on.  She loved her sexy new clothes and wanted to let others see her in
some of
them.  Sadly,
the
changes
she’d allowed
herself
in public so far, was that
new
underwear collection.  Panties, bras, camisoles, garters, thongs, teddies, if it was sexy she now had it.  No, not even Lisa
knew
she was already wearing her “dirty” little scraps of silk and lace under her conservative clothes, secretly loving the feel of those silky secrets against her skin.  Just like her day dreams, these were
for her alone.
For now anyway
.

I’ve got a good life, just boring, she tried to tell herself.  With a home of her own, a fairly new car and the ability to pay the bills with some
leftover
is more than a lot of people have
.
Still, she wanted more and when she saw other women with families she knew she deserved more too.   Watching a couple in love tore at Tori’s heart, always reminding her what she didn’t have.  Reading was
an
escape that gave her a glimpse of other
people’s
lives, showing her that there were other ways to live.  She
often
wondered if the romantic lives portrayed in those books were possible in real life.  Because that’s what she wanted, love and laughter with a husband and children, and especially wild romance.  She wanted to know what it felt like to be touched, to touch a man and feel this pleasure the books were always talking about.

Trying to focus on work seemed beyond her.  What’s wrong with me today, she wondered?   That’s when Gloria Bland, the court judge walked
in,
she
was a striking woman
,
b
rimming with platinum blond hair, curves and confidence
.
Think of Marilyn Monroe with brains.   Today Gloria was wearing a dark grey suit, it should have looked conservative
,
but on her it was just plain sexy.  Men stopped talking to watch her walk by, women looked at her nervously or with envy.  To top it all off the woman was smart, good at her job and she was just so darn nice.  Not that fake type of nice some beautiful women have but the deep down real type of nice.  Tori loved her, Gloria was her id
ol
and the closest thing she had to a friend
.