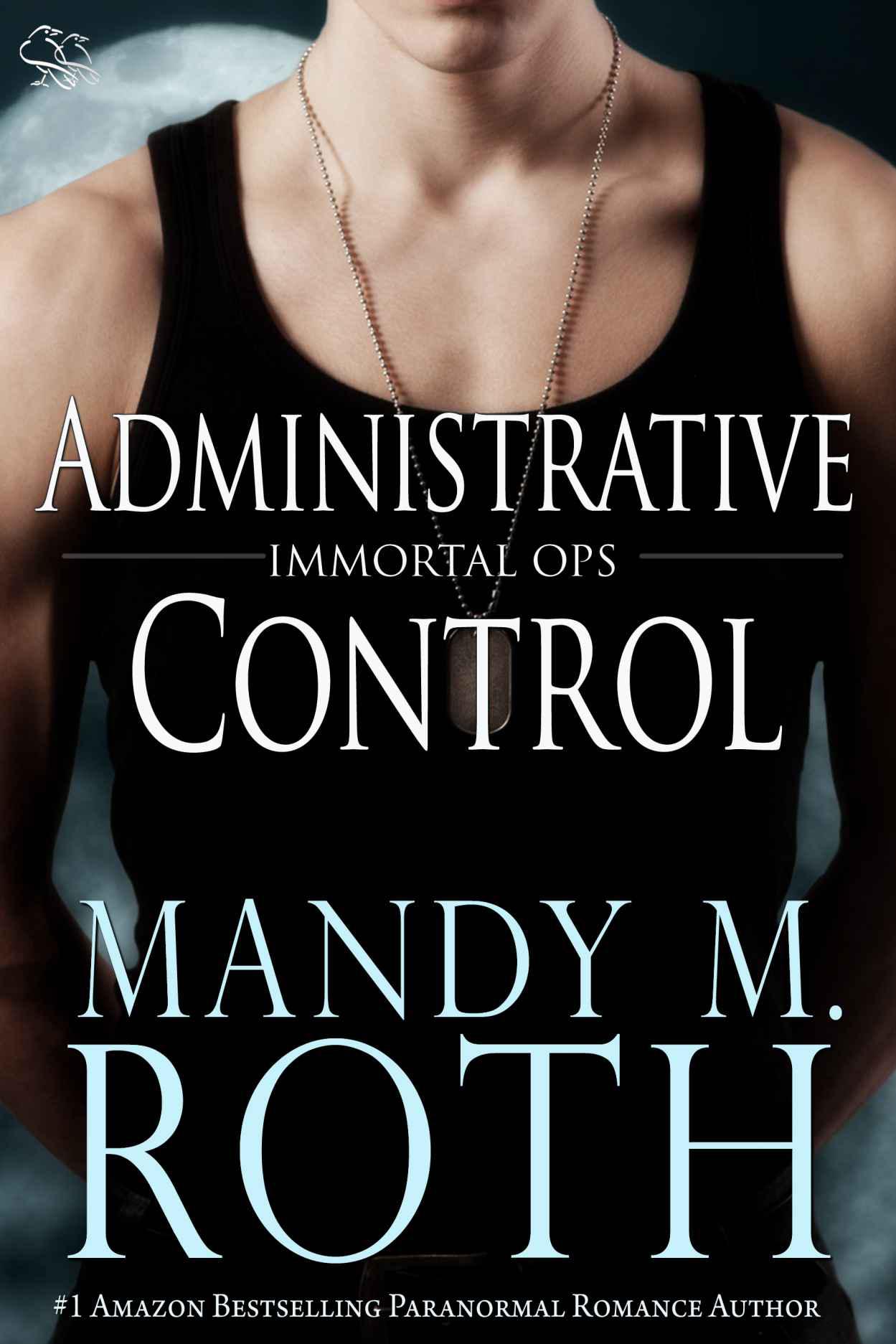 About the Author, Mandy M. Roth

Edits by: Sue-Ellen Gower & Dianne B.

All books copyrighted to the author and may not be resold or given away without written permission from the author, Mandy M. Roth.

This novel is a work of fiction. Any and all characters, events, and places are of the author’s imagination and should not be confused with fact. Any resemblance to persons, living or dead, or events or places is merely coincidence. This book is intended for a mature audience only. Must be 18 years or older.

No one knows just how powerful Colonel Asher Brooks is. It’s a secret he’s fond of keeping. As point person for the Immortal Ops, he has seen just about everything the supernatural community has to offer. That is, until he arrives on the docks in Seattle to find a mess his men didn’t make. Something big is going down there and it means business. His concern is for Jinx, a leggy redheaded succubus who calls the area home. He’s spent centuries denying what he knows to be true, thinking he’s keeping his woman safe and that it’s for the best.

When Jinx calls to tell him she has information for him, he worries the woman who drives him mad with lust might be in danger. He’ll do anything to protect her, even if that means claiming her for his own, whether she’s up for being claimed or not.

To the fans of my Immortal Ops Series. Thank you for your continuing dedication for the series. For being with me for over ten years, each step of the way, watching the I-Ops grow and the series expand. And thank you for giving this I-Ops novella a try. Over the years so much reader mail has come in asking for Brooks’s story that I felt it was time to tell it. I hope you enjoy Administrative Control as much as I’ve enjoyed writing it. I do recommend this novella be read in order of its release as it does not stand alone as the other Ops stories do and contains information required for the growth of the series.

Thank you to all of you who, for over ten years, have loved reading my tales about eugenics, DNA splicing, mixing animal DNA with human to create a hybrid and/or a super soldier, natural-born supernaturals, paramilitary groups, black ops missions and sexy alpha males within the Immortal Ops World.

Administrative Control was first written to be a 10k word short story. Apparently, the colonel felt he had double that to say.

To my editors, Suz and Bonnie. Thank you for dealing with my hot messes and for never judging my eccentric ways. Without the two of you I’m sure there would be extra body parts, people teleporting and so many other things I’m almost afraid to list them all.

To my besties, Michelle Pillow and Jaycee Clark for always being just a phone call away when I need to hash out a plot problem. And thanks for not saying anything when I trashed over one hundred pages and re-wrote this entire book from scratch because it wasn’t what I wanted it to be.

To my husband, Mr. Mandy, for understanding all the late nights I spend writing, all the days when I can’t remember if I showered or not because my mind is too wrapped up on the story and for always making sure I remember to take time to relax and breathe.

To C, B, and A for being pretty darn awesome.

(This will be updated in each upcoming book as new characters are introduced.)

Eadan Daly:
Alpha-Dog-Three. PSI-Op and handler on loan to the I-Ops to round out the team, Fae, mated to Inara Nash. Brother of Melanie Daly-Green. Book: Tactical Magik (Immortal Ops)

Culann of the Council:
Father to Kimberly (who is mated to Wilson). Badass Fae.

Pierre Molyneux:
Master vampire bent on creating a race of super soldiers. Hides behind being a famous art dealer in order to launder money.

Gisbert Krauss:
Mad scientist who wants to create a master race of supernaturals.

Walter Helmuth:
Head of Seattle’s paranormal underground. In league with Molyneux and Helmuth.

Jeneathea Isis Nevania Xenia, or Jinx as she was better known, sat at her vintage secretary desk, her attention on the stack of files and pictures before her. The soft glow from the fire burning in her office fireplace illuminated the area, giving it an easygoing, warm feel. Her office was her sanctuary. Very few people were permitted entrance to it. She had another office for meetings, one sparse in furnishings but still higher end. For too many years Jinx had been forced to have all aspects of her life appear to be an open book. When she’d been the property of a madman she’d been forced to be an exhibit on some days and on others his own personal whipping post.

Those times were long gone and she would never permit them to return. No. She was her own woman now. In charge of her life. She belonged to no one. Her business and her body were hers to do with as she saw fit.

Don’t dwell on what can’t be undone
, she thought, upset that she’d allowed herself to even start down that dark path once more.

The file before her made her insides twist into a knot. She’d considered burning the materials, but had resisted. The sheer volume was shocking, not to mention what it was all for.

Something she had no business in.

This isn’t your battle
, she reminded herself. Yet, she’d permitted herself to be dragged into it.

With a slow breath, she continued to stare down at the information before her. While it might not be her fight, it was her burden now. And if history had taught her anything, it was that when good people stood by and did nothing to right a wrong, the wrong often grew exponentially.

This wrong was big enough as was. It didn’t need to grow out of control anymore than it had.

Not that it even could.

She was in over her head and she knew it. A pit formed in the bottom of her stomach as she leafed through the pages and photos. They had come by her from a source she trusted—one who would never invent tall tales or try to gain attention in any way. It wasn’t information she’d normally find herself in possession of, but things were changing in the paranormal underground.

Honestly, things had been off for some time now. New threats were emerging daily. Enemies who once were unable to be in the same room were now forging alliances, combining resources and causing even more problems for those trying to keep things in order.

The enemy of my enemy is my friend.

A truer proverb did not exist for what was happening in the paranormal underground. The good guys were losing footing, and fast. If it kept up, they’d lose the war. And with the information in front of her, they had enough internal bullshit to implode, saving their enemies the time and effort of trying to eliminate them.

The Immortal Ops (I-Ops) and the Paranormal Security and Intelligence (PSI) agencies were two of the organizations that tried to maintain order and balance in an otherwise lawless supernatural area. They’d been fighting an uphill battle since their inception. A fair number of PSI operatives utilized the services her establishment provided.

Neither the I-Ops nor their commanding officer, Colonel Asher Brooks had used her establishment’s services. Though she’d wished more than once over the years that Asher had been a client. She couldn’t blame anyone who sought out the services provided by her people. Being immortal could be quite lonely if you’d not found your mate—and very few were lucky enough to cross paths with their one perfect match. A shifter alpha male left unfulfilled and on the loose could easily result in bloodshed if he didn’t keep the edge off his sexual requirements.

She’d seen the aftermath of such “restraint” before. The memory would be with her until her dying day. One didn’t forget carnage such as that.

The worst part had been when the shifter had come down from the crazed state to realize what he’d done. He’d never been the same. Prior to the event he’d been a man who had dedicated his life to fighting evil. For several hours that fateful night he’d been the ultimate evil.

Jinx sighed. So much pain, and more to come with the news she had to break.

A knock sounded from her doorway. She knew without looking who was there. “Come in.”

Aneta, one of her trusted friends and one of the girls who worked for her, entered. Their relationship had never been one of employer and employee. It had always been more like family.

Aneta’s damp, long, dark brown hair hung over one caramel-colored shoulder. The woman wore only the sheerest of nightgowns as she walked barefoot across Jinx’s office. She stilled a few feet shy of Jinx. “Have you looked it all over?”