Read After the Frost Online 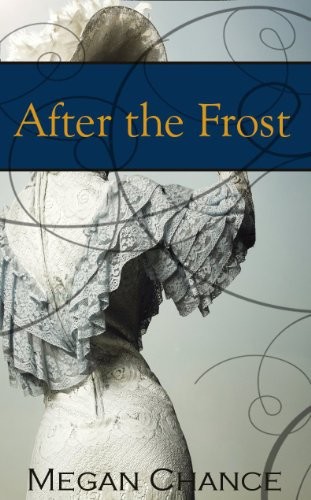 Other books by Megan Chance

A Candle in the Dark

A Season in Eden

To my grandparents, Kenneth and Ernestine Solt,

for giving me a history.

To my mother, Anita, for making it come alive,

And to my sister, Amy, for giving me Belle— and putting up with me after.

Suddenly, as rare things will, it vanished.

T
he house was just as she remembered it. Yellow walls, pristine white pillars and trim, windows that rippled with reflections. The edges—the wraparound porch, the steps swept clean of falling leaves, the gables of the kitchen—peeked out from between the circle of oaks surrounding it, protecting it, making it look safe and secure and well kept. It was the perfect house for a farmer, clean and serene. The kind of house that appeared to be a perfect home.

She stepped away from the buckboard and pushed back the brim of the floppy man's hat she wore. The muggy afternoon breeze touched her face, along with the smell of dirt and manure and corn. Familiar scents, all of them, bringing back a score of memories she thought she'd forgotten, wished she'd forgotten.

Home. She made a soft sound of disgust at the thought. Someone's home, not hers. Not anymore and not for a very long time. Now the house seemed almost malevolent in its serenity, the distorted windows hiding secrets, the new paint covering cracks that burrowed deep into the foundation.

Belle took a deep breath and started across the yard. The nervous knot that had settled in her stomach during the long train ride from Cincinnati climbed into her throat. She tried to ignore it as she hurried up the stairs. "Well, ready or not, here I come," she whispered under her breath, raising her hand to rap sharply on the door. The rapid patter of feet from inside stopped her, and Belle surged back just as the door flew open. A sleek streak of gray shot out, flying past her legs. She turned just in time for another, larger blur to slam into her.

The impact sent Belle stumbling. It was a child, she realized at the same moment she grasped the little girl's shoulders, catching herself before she hit the railing. "Whoa there," she said. "Slow down before you hurt somebody."

The little girl pulled away, rushing to the railing and leaning over it. "Scout!" she called. "Scout! Come on back here. I love ya, Scout!" Then, without pausing, she turned to look at Belle, her brown eyes wide beneath a shock of bright blond hair. "Did you see my cat go by here?"

Blond hair. Blond hair and a face that was hauntingly familiar.

Oh, good God . .
. Belle froze, unable to tear her eyes away from the little girl. She had the look of Rand all over her. The shape of the face, the chin, the nose— all familiar and yet not familiar. The face of a stranger. Belle realized suddenly that she hadn't seen Sarah since the child was born, and she had held tightly to her first image, to the vision of a small, mewling face and closed eyes. But the little girl who stood before her now, warm and vibrant and alive, was no longer that little newborn baby, no longer just a vague and formless imagining.

No longer anyone she knew at all.

She felt an instant, overwhelming flash of fear, a stab of regret that made her throat tighten and her mouth go suddenly dry.

The child stepped back from the railing. "Who're you?"

Belle swallowed. It was too late to back away now, and she didn't want to anyway. "I—uh—you must be Sarah."

"You come to visit her?"

"Who's that you're talking to, Sarah?" The voice came from the hallway inside the house, disembodied, sharp, and too loud. It silenced both of them. Belle's head snapped up. She felt the nerves again, fluttering in her stomach. Sarah spun on her heel and ran back into the house, leaving the door wide open behind her as she hurried down the hall.

Belle stiffened. She glanced over her shoulder, back to the road. The wagon was still waiting there. That simple reassurance gave her strength. She turned back to face the door again just as she heard the sharp rap of heels on the hardwood floor.
Clack, clack, clack
. Precise, efficient. The sound brought back a rash of memories.

"Dorothy, is that you? I'm sorry, I didn't hear—" Lillian Sault reached the doorway and stopped short. She made a small, garbled sound in her throat, put her hand to her heart as if the motion steadied her. Shock and an emotion Belle couldn't name flashed over her face—affection maybe, or relief, or maybe it was only surprise. But it was soon gone, replaced by a chill so strong, Belle shivered in the warm air.

"Good Lord. Isabelle." Lillian's voice was as icy as her face.

"I don't believe it. Oh, my Lord." Her mother stepped forward—just as she was supposed to—and held out her hand in a reluctant greeting.

Belle stepped back. "Well, it's really me. And I don't guess you should be takin' the Lord's name in vain that way, Mama. God knows you never let me get away with it."

Lillian's hand dropped to her side. She glanced over her shoulder to where Sarah stood in the shadows of the hallway. "Sarah, go on and find your papa, please. Tell him we've a visitor." Then, when Sarah didn't move, "Sarah, go."

The tone of her voice, unbending and stern, stabbed into Belle, along with the sound of Sarah's pattering footsteps as she ran through the house to the back door. Belle remembered that voice—oh, how she remembered it. And hated it. She felt as if she'd stepped into a memory—she heard the same punishing voice, saw the same elegant, snow-queen control that matched Lillian's icy blond looks. Her mother's hair was perfectly smoothed back, there wasn't a wrinkle on the clean white apron or a line on her perfect skin.

She straightened her shoulders in silent rebellion, smiling slightly. "Well, it's good to see some things haven't changed anyway."

Lillian turned to face her. "Why are you here?"

Belle snorted. "You must not be goin' to church lately, Mama. I never did care much for preachin', but- even I seem to remember somethin' 'bout a fatted calf."

Lillian's expression tightened. "Don't you sass me, Isabelle. I asked you a question."

"What if I said I just came back to pay you a little visit? Just to say hey?"

Lillian's expression didn't change. "Did you?"

Belle laughed shortly. "No. Believe me, there's only one thing on this earth that could bring me back here."

"Give her back to me," Belle said without hesitation. "Give her back and I'll turn around and leave quietly, just like you want me to. No one will ever know I was here."

Belle leaned forward, raised her own voice. "That's right, Mama. Give her back. After all, Rand
stole
her—"

"Quiet." Lillian said sharply. She glanced at the driver in the road, then at the Alspaughs' house just beyond the narrow field. She backed away from the door, slipping into the shadows of the hallway. "Come inside."

"Where the neighbors can't hear."
The words weren't said, but Belle heard them loud and clear. Appearances were everything to her mother. It made Belle want to stay right there on the porch, to yell the reasons she'd returned so loudly, they'd be able to hear her clear into Canal Winchester.

But she didn't. She followed Lillian into the house, wincing at the harsh sound of her mother's heels on the worn floorboards. The hallway was cool and dark after the bright mugginess of outside, and it smelled of beeswax and pears and sugar.

It was familiar—too much so. Like the outside of the house, the inside hadn't changed. The parlor door was still tightly closed; the same framed sketches hung on the roughly plastered walls, faded from the years they'd hung there. Even the rust-colored mums in the vase by the door looked the same.

Belle felt a needling sense of foreboding, and she ignored it, following the trailing fragrance of her mother's lavender water to the bright kitchen. Where the hall had been cool, the kitchen was sweltering, and the air from the open back door did little to ease it. Lillian was already inside, standing beside the huge black Oberlin stove, and Belle saw immediately where the aroma of pears had come from. Jars of the newly canned fruit filled the kitchen table; steam still lingered near the ceiling.

Lillian crossed her arms over her chest. Her face was overly calm and composed. "So, you came here to take her back, just like that." She shook her head as if to say,
"Shame on you."
"She's been here for two years, Isabelle. Don't you think you're a little late?"

Two years
. Belle's breath caught in her throat. Two years. She hadn't known—hadn't realized it had been so long. One year maybe—she would have believed one year. After all, it had taken nearly that long for her to discover Rand had taken Sarah from the couple Belle had left her with in Cincinnati, and several months more before she could save enough money to make the trip from New York City. But Bill Mason had led her to believe Sarah had only been gone a short time, and Belle realized suddenly that he had only told her what she wanted to hear.
Damn him. Two years.

But Lillian was watching her carefully, avidly, and so Belle struggled to maintain her own composure, to bury her surprise. "Don't fight me on this, Mama, I'm warnin' you."

"Your threats don't worry me. We agreed—"

The commotion at the back door interrupted Lillian. Belle followed her mother's gaze to the man coming up the stairs, the man who saw her suddenly and jerked to a halt. His form filled the doorway, just a silhouette against the sun, shadowed so that Belle couldn't see his features, couldn't see anything to identify him at all. But she knew who he was, knew his stance and the way he raked his hand through his tawny hair.

She stared at him in shock. The sight of him rocked her for a moment, and memories came rushing back. Memories that made her feel cold and helpless. Memories that filled her with anger. She struggled to control it.

"One and the same," she said, deliberately flippant. "Hey, Rand."

He stepped into the room and immediately seemed to overpower it. She had forgotten how tall he was, how small and insignificant his broad shoulders and narrow hips made her feel. Had forgotten the square, chiseled look of his features and that damned implacable set of his full mouth.

But she hadn't forgotten the way his hazel eyes turned cloudy and narrow when he was angry, and she refused to let him intimidate her. She was the one who had been wronged, dammit. She met his gaze full on.

"What the hell are you doing here?" he asked.