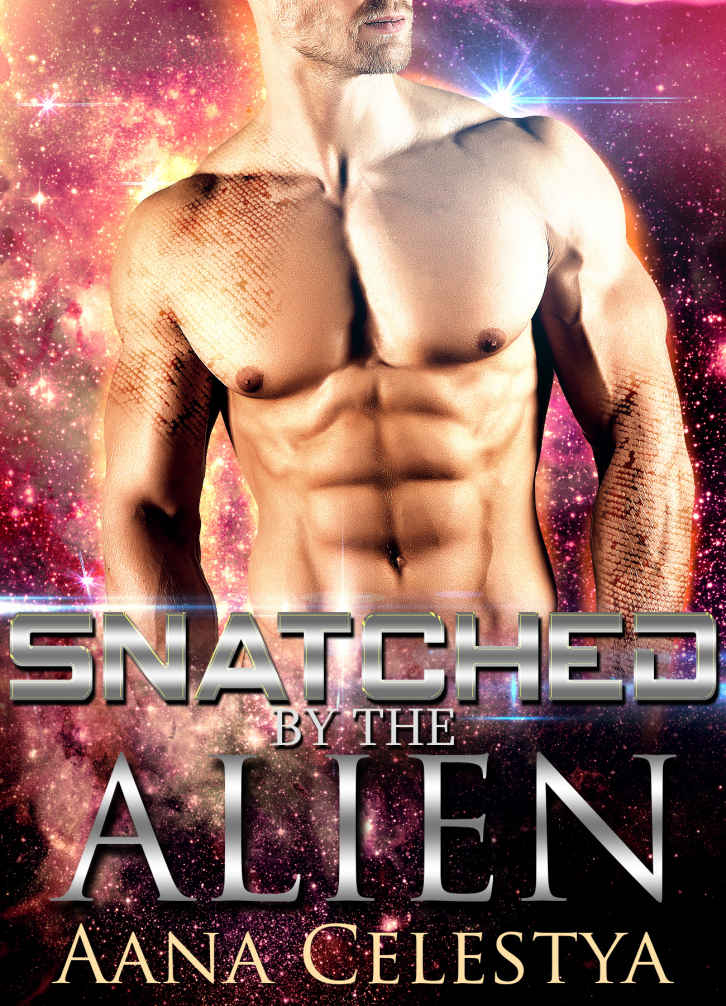 Snatched By The Alien

No part of this publication may be reproduced

in any way whatsoever, without written permission

from the author, except in case of brief

This is a work of fiction. Any resemblance to any

Joanne has always been fascinated by the stars. Taking up astronomy as a hobby, studying the cosmos is a welcome relief from juggling two jobs as a waitress and a barmaid and having to contend with the dramas and demands of her good for nothing ex-boyfriend.

Trapped in a dead end town with no prospects, this curvy, confident young woman dreams of escaping her boring and stress filled life and go off in search of adventure and excitement. But, Joanne gets more than she bargained for when a sexy alien prince arrives on Earth to claim her as his mate.
Prince Tamas is a handsome alien being from the fantastic artificial world of Prism Star. With his hot body and perfect features, he is everything a girl could possibly wish for, but Tamas is also an arrogant, ruthless alpha that is determined to take Joanne as his bride.

Abducting her from Earth and her old life, he takes her to the amazing world of Prism Star where any desire becomes reality. Tamas offers Joanne everything she ever wished for, but she is determined to resist his charms and escape back to Earth.
As the two get closer though, she sees the softer, romantic side beneath his chauvinistic exterior and can no longer deny her own burning passion for this alien alpha. What follows is a steamy, sensual romance that takes Joanne to the heights of passion and opens up all the magnificent wonders of the universe.

Nestled in the velvet folds of endless star fields was the Travis Conundrum.  It glittered like a burning jewel at the furthest point of the Orion Spur, an anomaly of secrets winking seductively.

Joanne stared entranced, scrutinizing the ghostly image on her phone and moved her fingers across the screen to enlarge it.  As her gaze fixed on it, the space anomaly seemed to call out to her, beckoning her like a Siren song.

“Hey, can I get some service here?” a male voice called out.  “I’m dying of starvation!”

Joanne jerked her head up, suddenly remembering where she was.  On the other side of the diner counter, Larry’s huge bulk was perched on a stool.  He made a sour face.  “Have a heart doll, I’m almost a skeleton.”

Joanne grinned and pocketed her phone.  The Travis Conundrum would have to wait until her break.  “Okay, okay,” she said in mock-exasperation.  “I can see very well you haven’t had a full square meal in months.”

Larry slapped his prodigious stomach.  “You have to make a lot of sacrifices to get a figure like mine,” he said gravely.

“I’m sure you do. You want the usual?  Fried chicken wings, eggs and fries along with and a black coffee?”

“You know me so well,” Larry drawled.  “When are we going to stop dancing around each other and you finally admit that you are madly and insanely in love with me?”

“As soon as you become a multi-billionaire I’ll book the church,” Joanne replied, writing out Larry’s order and sending it through to the kitchen.

“Ah, you wound me deeply girl,” Larry moaned.  “Underneath that amazingly beautiful exterior beats the heart of a cold-blooded capitalist.  Have you met my ex-wife, by the way?”

“Which one?” Joanne asked wryly as she fixed him his coffee.  “And I’m not a capitalist I’m a realist and I’m also not amazingly beautiful.”

“You’re clearly lying about the beautiful bit, my darling.  You are a like an angel descended from the heavens.”

“Quit with the baloney, Larry,” Joanne replied.  “I’m not a starry-eyed kid anymore.”

“Don’t be so hard on yourself,” Larry said, his tone becoming serious.  “You really are one in a million.”

Joanne smiled and was about to make another self-deprecating retort but Table Four’s order came out and she had to go and serve them.  She thought about Larry’s compliments wishing they were more genuine.

He meant well, of course, and was a good friend but he was pushing eighty and quite lonely now that his marriage had come to an end.  He was only being nice when he complimented her but she wished he would ease off sometimes.  If she was so stunningly beautiful, why was she still single?

Reaching Table Four and delivering their meal, she chatted pleasantly with the elderly couple she’d just served and then ambled back to the counter.

Taking her place back at the diner, she looked out of the window, losing herself in her thoughts while Larry read the sports page while he waited for his food.  Despite not being one of those vain airheads who obsessed about their appearance, she found herself checking out her appearance nonetheless, her sudden scrutiny sparked by Larry’s generous compliments.

With her frizzy blonde hair and dimpled face, she would hardly describe herself as plain, but she wouldn’t call herself beautiful as easily as Larry did.

She brushed down her uniform and straightened her apron, depressed at how dowdy she looked.  When not at work, she loved to wear bright colours that showed off the generous curves of her body and the voluptuous swell of her breasts.

It wasn’t arrogant for her to say that she did scrub up well, it was just a shame that she only seemed to attract sleazy losers, Larry not included.

“Relax my cherub,” he said without looking up from his newspaper, “you’re still perfection made flesh.  If I was fifty years younger and had a life-time supply of that drug, I’d make you the happiest woman on the planet.”

“Oh, Larry, if you had a life-time supply of that drug, you’d make every woman on the planet happy.”

Larry barked a laugh.  “In my dreams, maybe.  Oh I almost forgot to ask, how’s the blogging going?”

Joanne turned and cocked an eyebrow at him.  “You know what blogging is?”

“Hey, I’m not a complete fossil, you know.  I know what you whizz kids get up to on that Internet.  I bet all your astronomy buddies are all in a flap about this Conundrum thing that just appeared?”

“Oh yes,” Joanne said enthusiastically, eager to discuss the Travis Conundrum with another person.  “You can’t imagine the stir it’s caused.  It looks like it just appeared out of thin air one day.  The scientists are absolutely baffled by it.”

Larry nodded.  “So the aliens have arrived to enslave us then?  Least it means we won’t get enslaved by our politicians.”

“Oh, don’t get me started,” Joanne said shaking her head.  “It’s far too early to say for sure whether it’s a natural phenomenon or an artificial construction.

When Gerald Travis first posted his discovery online, I wrote a blog post outlining that we shouldn’t jump to conclusions and I got a tidal wave of abuse from the tin foil brigade.  I even got death threats.  The internet can be a fun place sometimes.”

“Losers,” Larry agreed.  “You know you should be an astronomer for real, not just doing it as a hobby.  You certainly got the smarts for it.  You need to be working for the scientists, not in a dead end job like this.”

“Then who would you have to drive you crazy?” Joanne asked dryly.  “I suppose there’s always Doris to seduce.”

Larry grimaced at the mention of the other waitress’s name.  “No thanks, she doesn’t turn me on.  Seriously though, you can do so much better than this place.”

Though she didn’t think herself as arrogant, Joanne was inclined to agree with him.  Astronomy was her first great passion from ever since she was five years old and got her first telescope.  During those long lonely years growing up in foster care, looking up at the stars had been a source of tremendous comfort.  She had taken up the study of Astronomy with the passion of a zealot and she had harboured ambitions to make it into a career, but the dreams of a child struggled to compete against the realities of life now she was in her mid-twenties.

“I want to go back to college to study Astronomy and Physics,” she admitted, “but you know how crazy my life is right now.  Maybe in the new year things will settle down.”

“Okay, but don’t leave it too late or you’ll end up like me,” Larry warned.  “I won’t be able to get by on my male model looks forever.”

Joanne laughed.  “Well, when you’re a multi-billionaire you won’t need to fall back on your looks.”

After Larry’s food came, it was soon time for Joanne’s break and she disappeared into the staffroom and got out her tablet to check over her blog and finish her latest article on the Travis Conundrum which had been so much in the news right now.  Her article was outlining the possible nature of the mysterious celestial object, reiterating that it had appeared out of nowhere and cautiously suggesting that it might be some kind of extraterrestrial structure.

She wasn’t completely opposed to the idea, and it would be extremely small-minded to believe that humans were the only intelligent life forms in the cosmos, but she just didn’t buy into the bulk of conspiracy theories online about shape-shifting reptilians pulling the strings of the governments of the world.

If there were other beings out there and could create something as amazing as the Conundrum she doubted that they’d be interested in a lowly backwater like Earth.

She posited this parting thought in her article and posted it online.  Her astronomy blog was her other great passion and gave her an outlet for her interest.  She had made quite a name for herself and the website got a healthy amount of traffic.

It didn’t completely compensate for not having her ideal career, but it was a step in the right direction.  She found herself looking at the images of the Conundrum again and her mind wandered.  What exactly was it and would they ever find out for sure?

Because of its distance, she doubted they would ever find out the answers in her lifetime.  They wouldn’t even be able to travel to it let alone study it closer through telescopes.  She felt a pang of envy.  Sometimes, she wished she could travel among the stars and learn the secrets of the universe.

Letting out a heavy sigh, she got to her feet and put away her tablet.  Never mind, she said to herself, the universe is a very big place and you never quite know what it might have in store for you.

“I see no value in trawling Earth’s information networks, trying to find the perfect woman, Prince Tamas,” Pero declared haughtily as he flittered around the control centre.

“All you seem to be finding are silicon implanted adult entertainers who are ‘come crazy’.  That sounds a most unfortunate ailment in my opinion.”

Lounging on the jewel-crested couch, Tamas stretched and scratched his side.  “Don’t be such a prude,” he said chidingly.  “It is good to immerse oneself in the cultures of other worlds.  Regardless of how primitive they might be.”

“I wouldn’t want to immerse myself in that kind of thing,” the little sylph muttered.  He fluttered his diaphanous wings and his sleek golden body darted over to Tamas’ couch.  He pointed at one of the twelve monitor screens arrayed in front of the prince.

“This is all a waste of time,” he said pointedly.  “You’ll never find what you are looking for on this tawdry little world.  We should go back to Prism Star before we miss the festivities altogether.”