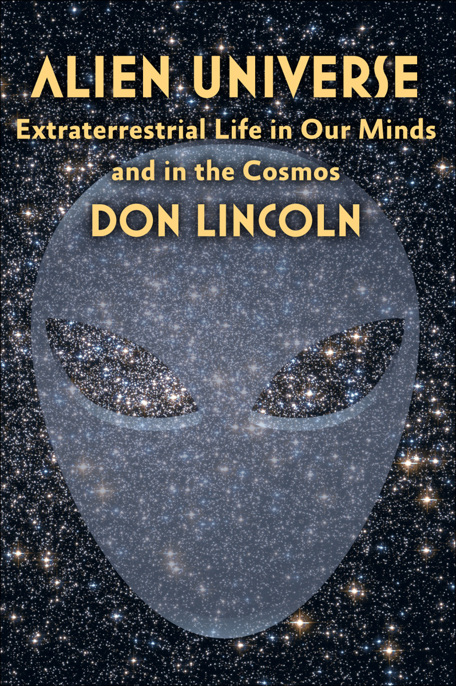 Extraterrestrial Life in our Minds
and in the Cosmos

Alien universe : extraterrestrial life in our minds and in the cosmos / Don
Lincoln.

A catalog record for this book is available from the British Library.

Special discounts are available for bulk purchases of this book. For more information, please contact Special Sales at 410-516-6936 or [email protected]
.

Books are never a solo effort. To convert an idea to a finished product takes the contributions of many.

Even the first idea can incorporate contributions from many people. This book wouldn’t exist in its current form, were it not for my wife, who listened to my initial sketchy ideas and helped me weave them together into a coherent whole. The idea to interleave our evolving idea of Aliens with the concerns of the public at the time is entirely hers, and she also greatly clarified the presentation of several of the scientific topics I covered. Any residual rough spots in the execution are from when I stubbornly didn’t listen to her.

Drs. Hassan Al-Ali, Albert Harrison, Judi Scheppler, Jill Tarter, and Erica Zahnle all provided expert advice on the text, correcting the misconceptions and errors. I am very grateful for their efforts and to Alvaro Amat for making helpful connections.

I would like to thank Patty Hedrick, Dr. Julie Dye, and Meredith Carlson for their assistance in procuring the drawings of Aliens, as imagined by children. I also thank both the Fermilab library and the Geneva Public Library staff for their invaluable assistance in finding original sources. The UFO literature is replete with fakes and manufactured “facts.” To cut through various writers’ agendas, it is imperative to confirm everything with original documents.

I am grateful to Linda Allewalt, Meredith Carlson, Sue Dumford, Vida Goldstein, Lori Haseltine, Dee Huie, Nancy Krasinski, Diane Lincoln, Toni Mueller, Robert Shaw, and Felicia Svoboda for being test readers. In addition to a myriad of typos, they helped identify weaknesses in the original manuscript that I hope I have removed. Michele Callaghan should get special mention for her deft copyediting. Finally, I would like to thank my publicist Kathy Alexander for her tireless efforts.

While these people all contributed directly to this book, it goes without
saying that the information and tales recounted here wouldn’t have been possible without generations of historians and scientists. Human knowledge is a cumulative endeavor, and what I’ve gathered here is really the work of hundreds of people.

It is traditional in my books to assign blame to a specific childhood friend of mine for any unnoticed residual errors. However it would be inappropriate to mention his name in a book that talks about Aliens, whom some think already walk among us. It wouldn’t be right to blow his cover.

The beginning is the most important part of any work.
Plato

One of the Biggest Questions of All

Of all the things that could change mankind’s outlook, one of the biggest would be contact with intelligent life originating from another world. There have been similar paradigm-shifting episodes before in the history of humanity. When Galileo first saw the moons of Jupiter in about January of 1610, it marked the beginning of the end of the idea that Earth held a unique location in the cosmos. The publication of his manuscript
Starry Messenger
in Venice just two months later began the spread of the knowledge that someone had incontrovertible evidence that our planet could no longer be viewed as exceptional. The genie was out of the bottle.

Another paradigm-shifting event was the death of human exceptionalism, developed by Charles Darwin and his contemporaries. The idea that humans are but a twig on the vast tree of life forever changed our vision of ourselves as a unique species that had been given the Earth as our birthright. We became
animals, like countless others, undoubtedly one with tremendous power to shape the globe, but still just a cousin species among many; one who had been shaped by the same forces that created the bear, the shark, and the kangaroo. Humanity’s exceptionalism was reduced to our ongoing pride of our intellect and technical achievement.

While we know of other species on Earth who use tools and have a degree of intelligence, the discovery of no other species comparable to us has allowed some to continue to believe humanity to be exceptional and that it has been given, as the Bible says, dominion over all living things. Even the non-religious might point to our spread from Africa across the globe, exploiting all environments and all niches, as a kind of Manifest Destiny of species. Taken to an extreme, some dream of a future in which mankind has left the Earth and spread across the cosmos, in a triumphant march of galactic conquest.

But what kind of galaxy will we encounter? Setting aside the very real practical difficulties associated with interstellar travel, is the galaxy a lifeless and sterile place, with the Earth being a unique and precious cradle of intelligent life? Or is the universe instead a cosmopolitan neighborhood, with many planets inhabited by species intellectually and technologically similar to our own? In short, we must ask a single important question.

My purpose in writing this book is to explore that question. While imaginative thinkers have long speculated on the possibility and nature of life on other worlds, it was in the twentieth century that the idea has become common throughout Western culture. Unlike in early centuries, where discussions of alien life was the purview of the intellectual or academic, the idea of aliens has penetrated the literature, newspapers, movies, and other sources of information enjoyed by the public. The idea of Aliens, UFOs, alien contacts, abduction, interspecies reproduction, and so on, all exist to various degrees in the literature available to everyone.

This leads us to the fundamental question of the book. If Aliens exist, what do they look like? Or, even more specific still, what have members of the ordinary public
thought
Aliens look like over time? If you walked into a coffee shop in Greenwich Village in New York and asked the guy behind the counter what Aliens looked like, what would he say? What sort of answer would you get if you stopped instead for coffee in a diner in Ottumwa, Iowa? Or asked the same question 50 years ago?

Note the capital “A” in the word “Aliens.” This choice is made to explicitly
identify intelligent aliens, with which humanity could hypothetically one day compete for galactic domination. I am carefully distinguishing Aliens from alien life in general, which might be much more common in the universe. Aliens might one day appear in our skies and say “Take me to your leader,” or they may attack the Earth for some of its resources. An alien duck flapping happily in the skies of a world circling Betelgeuse is
not
what I mean by an Alien. An Alien would be a sentient creature on that same world who has written a poem about that duck. An Alien must be intelligent, although not necessarily have extensive technology. An alien caveman counts as an Alien. An alien monkey does not.

Of course, the idea of alien life and Aliens go hand in hand, in the same way that life on Earth and humanity are inextricably linked. So, in parts of the book, we will occasionally expand the conversation to include a more generic discussion of alien life. But the focus will be on Aliens and how mankind’s image of them has evolved and why.

So let’s talk a little bit about the topics that will be covered in this book. To begin with, several different sources of information have guided our collective image of Aliens, which we can divide into three types: nonfiction, fiction, and a third category in which the boundaries between fiction and nonfiction are totally blurred.

Nonfiction comes from the best scientific thought of the era. Carl Sagan, of “billions and billions” fame, was an astrobiologist and a highly successful science popularizer. He and his colleagues have spent a considerable amount of time thinking about what our knowledge of the physics and chemistry of the physical world tells us about what Aliens might be like. More traditional biologists are finding life in more and more extreme environments, extending our appreciation of the versatility of life of the kind found here on Earth. However, not all planets in the universe are Earth-like, and it is possible that Aliens might be radically different from humans in the kind of air they breathe (if, indeed, they breathe at all), the temperature at which they thrive, the chemicals necessary for their metabolism, and so on. While science does not have a final answer on what an Alien might look like, a tremendous amount of progress has been made in understanding the range of the possible. We will certainly discuss these scientific subjects in this book, but the public’s conception of Aliens tends to come not from the halls of academia, rather from the media and the entertainment industry.

“Space, the final frontier” are the opening words for one of the most successful science fiction television series of all time and the motivation for many a budding young scientist. In
Star Trek
, the crew of the starship
Enterprise
zips around the galaxy looking for “new life and new civilizations.” The
Star Trek
universe consists of a grand diversity of species, where many worlds host life and indeed intelligent life. In fact, if Aliens didn’t exist in the
Star Trek
universe, the show would have had a very different character. Without the Klingons, Cardassians, and Romulans (to name just a few), the humans on the starship would fly around the galaxy, poking at this barren rock or that, maybe occasionally encountering a nonsentient slime mold living on Epsilon Eridani IV. That wouldn’t be as interesting as the social and political interactions that dominate the series’s myriad plots.

Star Trek
is not the only movie or television show that has shaped our thinking of Aliens. The bar scene in the first
Star Wars
movie showcases a diverse and colorful menagerie of Aliens, a “wretched hive of scum and villainy” as one character put it, socializing as humans would in the corner pub (or maybe a biker bar). In the subsequent
Star Wars
movies, many other creatures are introduced. Although Jabba the Hutt is an exception, most of the Aliens are vaguely humanoid, bipedal creatures with limbs and features that recognizably correspond to human analogs.

In fact, the bipedal structure of Aliens on both the big screen and little one has shaped the public’s vision of them. In the old days, movie Aliens had to be bipedal because the actors that played them were obviously human. With the currently available techniques of computer graphics, movie makers no longer need to make such human-looking Aliens. However there is still the issue of making movie characters with whom the audience can relate. It’s hard for me to imagine a successful movie that tells the story of star-crossed lovers with a species that involves three genders and has the color and consistency of lime flavored Jell-O. If you forgive the phrase, the storyline would be … well … just too
alien
to resonate with moviegoers.