Read All She Wants 4 Christmas Online 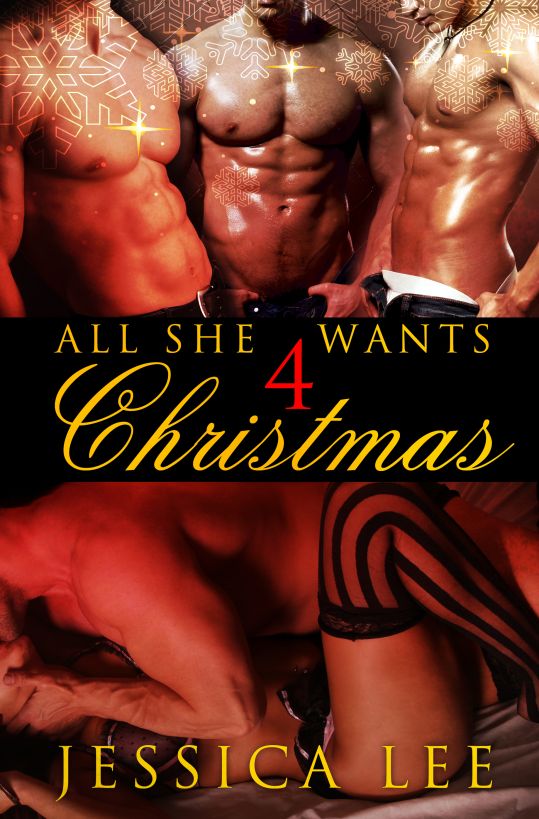 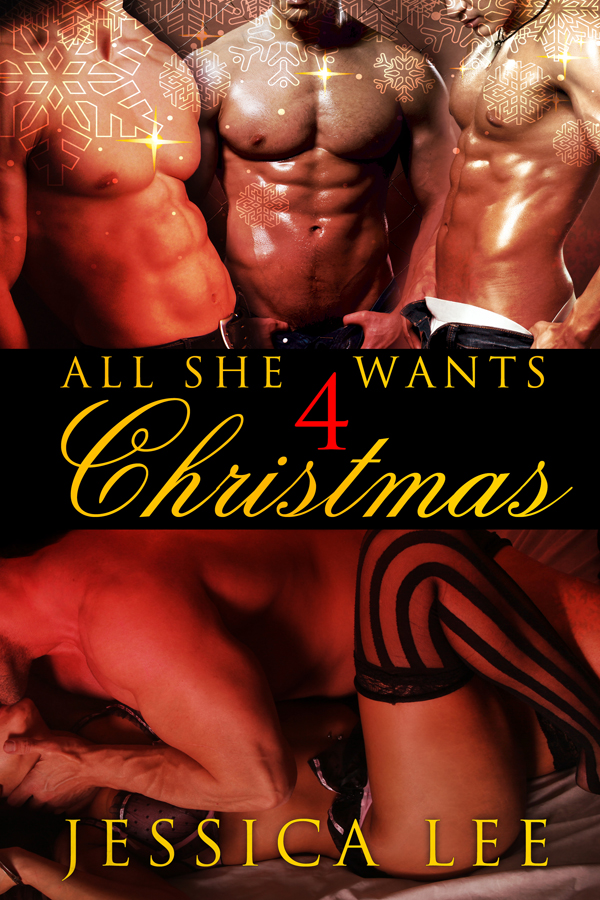 This is a work of fiction. Names,
characters, places, and incidents are all fictitious products of
the author’s imagination. They are not real. Any resemblance to
actual events, locales, organizations, or persons, living or dead,
is entirely coincidental.

All rights reserved. No part of this
book may be reproduced electronically or used in whole or in part
without written permission from the author. Unauthorized use or
distribution is illegal. Exception given for review
quotes.

What if on Christmas Eve all your
darkest desires came to life…could you handle it?

It's Christmas Eve, and all Monica Sims
wants is for her fiancé, just once, to step outside his comfort
zone. She loves him, and life is fine in their perfectly planned
world. But Monica is ready for more. She takes a risk and shares
with him her darkest fantasies: Domination. Submission.
Surrendering to the will of more than one man. But her confession
is more than her straitlaced boyfriend can handle—or so she
thought.

Dane knows exactly what he wants in
bed: just him and Monica, his fiancée—alone. Simple, easy, vanilla
sex was all he ever needed. That was until the night he found his
fiancée in her office, watching—enjoying—a very naughty movie on
her laptop. Determined to be the one to unleash her control, Dane
decides to surprise her on Christmas Eve with a trip to a private
fetish club. But they won't be alone.

"Where are you taking me, Dane
O'Laughlin?" Monica adjusted her blindfold once more and squirmed
in her seat. "It's Christmas Eve, and you're being very naughty
torturing your fiancée like this," she added. Though a part of her
loved this unexpected side of him, the other hated not knowing what
was coming next. "Santa's not going to bring you any presents in
the morning if you don't come clean. Now." This time, she didn't
hide the annoyance in her voice. He'd been teasing her all week
about some big surprise, and she’d reached the end of her
patience.

The rhythmic click of a turn signal
sounded right before the car veered left, then bumped as if
entering a driveway.

"Are we here? Wherever here is?"
Her palms literally itched to pull the damn blindfold off. She
would have never gone for something like this a few years ago. The
control freak in her would have flipped. But after three years of
living with Dane in their perfectly planned world, she'd discovered
having a firm grip on every moment in her life wasn't enough
anymore. Monica needed more. She and Dane had been struggling to
keep their relationship from falling apart. So when he'd seemed so
excited about this surprise he had for her, she couldn't deny
him.

Monica went for the knotted silk at the back of
her head.

"No." Dane's warm hand clasped her
fingers. "Not yet. Not till we're inside."

"Inside where?" Monica's heart
raced. "You know how being kept in the dark makes me
edgy."

Since when had he become this
fun-loving, spontaneous, blindfold kind of man? For over a year,
Monica had been telling him how she yearned to do something wild
and crazy. Something completely out of character. Maybe even
indulge in bringing a few of their sexual fantasies to life. Like
the one that had plagued her dreams for the last two years after
she'd stumbled on a certain porn video. She'd sat there,
mesmerized, as a woman surrendered under the attention of three
men. God help her, but the scene had been the hottest thing she'd
ever witnessed. Dampness gathered in her panties at the
recollection of the graphic images.

She'd been overwhelmed by her
physical reaction.

Monica had played the movie
over and over on her laptop, touching herself, reaching the most
intense orgasms.
Damn.
She could only imagine what her climax would feel like if her
fantasy ever became a reality. Monica had finally got up her nerve
and confessed her secret fascination with being dominated and taken
by more than one man. But her straitlaced, all-business fiancé had
given her a shocked look as she'd revealed her darkest desires.
He'd stared at her as if he were trying wrap his mind around what
she was saying, then added that he had all he ever needed with
her—and her alone—in his bed.

A deep sigh exited her
lungs.

"It's nothing." Nothing that losing
a few of his inhibitions wouldn't cure. Whatever Dane had up his
sleeve, sharing his fiancée—even for one night—was something Monica
could never see happening.

The car door slammed; then moments
later, hers opened. Dane took her hand and helped her from the
passenger seat. Her imagination had already painted the picture of
what she assumed he'd planned. Probably some big dinner party where
he'd invited her coworkers and friends to celebrate the holiday.
Twigs of mistletoe hung in all the doorways, forcing a multitude of
uncomfortable kisses on unsuspecting people. That would be about as
wild as it would get. She loved him. Always would. But the man
rarely stepped outside his comfort zone.

Monica held on to Dane's arm,
enjoying the hard feel of his bicep under her palm as he guided her
across uneven pavement. The whoosh of an automated door greeted her
next, followed by a cool blast of air conditioning across her face,
lifting her hair from her nape. It might have been December, but
living in the Deep South, you never knew from one minute to the
next whether you'd be in a coat or shorts. She breathed deep,
detecting a hint of cinnamon, cloves, and leather. Soft music
played, sensual instrumental melodies that instantly had her
wanting to sway her hips to the seductive sounds. From a distance,
several whispered conversations filled the air.

"Trust me, love. It will be worth
the wait. I assure you." The innuendo laced within his words sent a
shiver of anticipation down her spine and awakened her clit. What
in the hell was he up to? She barely recognized the man on her arm
tonight.

The soft tap of footsteps neared,
then stopped beside Dane.

"Sir, if you'll follow me. Your
accommodations are ready."

A second later, they were moving again. Monica
held tight and followed, more than a little self-conscious of what
people must have thought of her walking in there with a red silk
scarf covering her eyes.

The jingle of keys alerted her that
they must be close to their room. Dane slowed to a stop, a door
latch clicked, and they moved forward once more.

"Now can I take this off?" Monica
touched the smooth cool surface of the material keeping her in the
dark.

Dane grasped her shoulders and
turned her around.

"Yes." His deep voice resonated at
her ear. Then his hands were at the back of her head, untying the
blindfold.

The silk fell away, and Monica
blinked against the sudden brightness of the room. It took a few
seconds for her vision to clear, then the warm colors around her
sharpened into focus.

"Oh. My. God." Monica took one
hesitant step, then another toward the extra-large king-size bed
filling the center of their "accommodations." She trailed her index
finger over the leather cuff secured to the headboard, directly
across from its twin on the other side. On the wall by the bed hung
a collection of items she'd only seen online, never in living
color: a couple of paddles, floggers, a ball gag, and various
masks.

Her heart pounded.
Oh my God.
The words
looped inside her head. Monica dropped her hand to the soft,
truffle-colored duvet draping the mattress. Never in her wildest
dreams would she have expected Dane to want to—want to— Not
after—

"Are you surprised?" He circled her
waist with his arms and pulled her against his chest.

"You could say that." She
nodded.

"Pleasantly surprised?" She didn't
miss the wistful tone in his voice. Her pulse skipped.

"Good, because the night has only
begun."

Monica closed the door to the
suite's bathroom and slumped against the wood. This was really
happening. He'd actually taken her to a fetish club. Who would have
ever thought? She sank her teeth into her lower lip, holding in her
squeal of delight. Her head fell back between her shoulders and
bumped the hollow surface. Something rattled behind her on the
door, reminding her of why she'd come in there in the first place:
she needed to change. Dane said he'd prearranged something for her
to wear.

She pivoted around and sucked in a
startled breath.

"Why, Mr. O'Laughlin. You have
definitely been holding out on me." She grinned.

The most gorgeous bloodred
thong and bra hung from a velvet-covered hanger on a hook, along
with a pair of snow-white, thigh-high fishnet stockings folded over
the horizontal rod. Monica removed the items, sauntered over to the
mirror, and held them up against herself for inspection. The color
popped against her milky-white skin and serve as a dramatic
contrast to her dark, shoulder-length auburn hair and green
eyes.
Scandalous.
The only word that could describe her reflection. Oh yes, this
was going to be a night she would never forget.

After several minutes and probably
a dozen or more rechecks in the mirror, Monica sashayed back into
the bedroom. The red six-inch stilettos left for her by the
dressing table were insane, but paired with her skimpy lingerie
trio, she felt like one of those Victoria's Secret angels ready to
strut the runway. She risked a glance in Dane's direction, where he
sat on the edge of the bed, wearing only a pair of emerald green
pajama bottoms. Her breath hitched. Judging by the adoring look on
his face, one would have thought she had just dropped from
heaven.