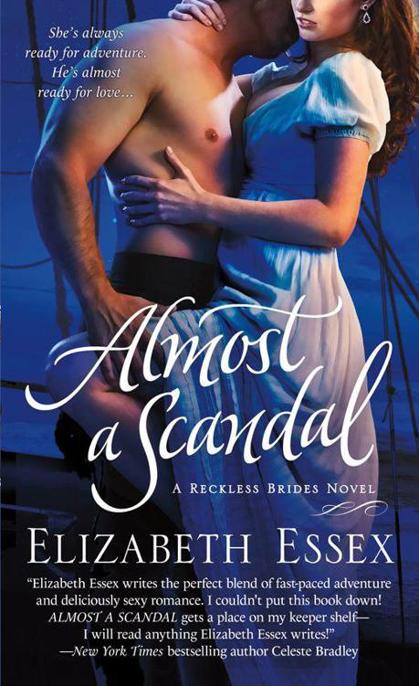 To the Essex gentlemen:

To the daring and darling youngest Essex spring, for drum barrages to give the proper feeling for battle, and for all things within the realm of twelve-year-old boys; and to the indispensable and deeply loved Mr. Essex, who held firm in his belief that this book should be called “Love Amidst the Cannonballs,” for saying, all those years ago, “Stick with me, kid.”

It wasn’t the first time Sally Kent had donned a worn, hand-me-down uniform from one of her brothers’ sea chests, but it was the first time it had felt so completely, perfectly right. She had always been tall and spare, strong for a girl, but dressed in the uniform of His Majesty’s Royal Navy, she felt more than strong. She felt powerful.

Because Richard had rejected all claims to duty and honor. He had forsaken his family. He wasn’t coming back.

That morning, the very morning he was to have worn his uniform and boarded His Majesty’s Ship
Audacious
with all the other candidates for midshipmen, he had disappeared, gone as if he had been swallowed whole by the heavy, obliterating rain.

Richard had left her, quite literally, holding his bag.

And she was going to use it. Sally closed her mind to the insistent guilt whispering in her ear, wrapped her breasts in cotton strapping, and put on every single piece of that uniform, from the faded blue midshipman’s coat and white breeches, down to the black buckled shoes. She ignored the hard pounding of her heart in her chest, jammed the dark beaver hat low over her eyes, and walked down the stairs and out of the inn. She swallowed her fear, crossed the wet cobbles, and took her brother’s place at the sally port on Portsmouth’s rain-drenched quay.

A lieutenant glared at her from under the dripping brim of his cocked hat. An irate lieutenant. He stood in the stern of a ship’s boat, impervious to the filthy weather and the rise and fall of the vessel tossing fitfully beneath him. The sharp vertical lines of the scowl between his dark brows could have scraped barnacles off a hull, but his low voice was incongruously smooth. “This is His Majesty’s Royal Navy, Kent. Not a damned church fete. We’re not going to issue you a bloody invitation.”

Sally jerked her chin into her collar to hide beneath the dark brim of her hat. She would have known that deep, laconic voice anywhere, even over the pounding din of the rain.

But would he know her?

He had been eighteen years old and on the verge of taking his lieutenant’s exam the last time she had seen him, the summer her brother Matthew had brought him home to Falmouth. Col, they had called him. Six years ago, he had been long and lean, but by God, clad in the endless fall of his gray sea cloak, he was a leviathan now. A great oaken mast of a man looming up from the waist of the small boat.

A man grown. A man whose jaw looked as sharp as an axe blade and whose piercing eyes, the color of green chalcedony stone, were just as hard and impenetrable.

“Well, Kent?” Col’s voice was low and dangerously soft—disconcerting in such a hard-looking man. “What’s it to be?”

There was no question. There hadn’t been any question since the very moment she had made her decision to tie the black silk stock around her neck and shrug herself into the loose folds of the blue coat.

She was going to act.

Sally looked beyond Col, to the ship riding low at anchor some half a mile beyond. His Majesty’s Ship
Audacious,
her thirty-six cannons hidden behind the closed gunports, called to Sally, even in the dirty weather of Portsmouth Harbor. She was a perfectly balanced frigate of war, trim, elegant, and sleek, her masts and spars soaring high above the deck—a vision of leashed, lethal power.

Unlike Richard, Sally would give anything to experience that power.

Here was her chance. And why shouldn’t she take Richard’s place?

“’At’s the way of it, Mr. Colyear.” The windburned tar at the gig’s oars knuckled his forehead to Col in approval as he reached to secure Richard’s sea chest—her sea chest—in the bow of the boat. “Them young gentlemen need firm talkin’ to, if they’re to become anythin’ more than loose cargo.”

“Thank you for your insight, Davies.” Col’s tone was the only thing in the boat that remained dry. “Get that dunnage stowed, and cast off as soon as may be. There’s more important work to be done this day than ferrying sniveling boys to their duty.”

Having divested himself of that cold piece of shrapnel, Lieutenant Colyear did not deign to speak to her again for the remainder of the time it took to row out to the frigate. He took his stance in the stern of the vessel and retreated into stony silence beneath the gray wall of his cloak, as if she were as inanimate and unimportant a piece of cargo as the sea chest.

Even standing with quiet balance in the stern, David Colyear was the farthest thing from inanimate she could conceive. His hands moved decisively on the tiller, and his body adjusted with an easy, innate grace to the haphazard perturbations of the boat beneath him.

And his eyes. Those glittering stony green eyes never stopped moving, never stopped roving over the harbor, evaluating the lay of a vessel’s waterline, calculating the weight of a gun, assessing the work left to be done.

Those sharp eyes cut to hers and caught her looking.

Sally shrank into herself like a startled turtle, hunching her shoulders to cover the embarrassed flush sneaking its way over her collar. She would give herself away faster than a sinking cannonball looking at him like that. Better to look forward, toward
Audacious
.

The frigate grew slowly in the gray murk of the downpour, until they were dwarfed by the loom of the hull and the complicated, orderly cobweb of spars and rigging dawning above them. Above toward heaven.

Her foolish, pounding heart tangled in her chest just at the sight of her. Infatuated, that’s what she was, the way any other nineteen-year-old girl would have been at the sight of a handsome man, instead of a warship.

But she wasn’t like other girls. She was a Kent, and to her this frigate, this warship, was more terribly beautiful than any man could ever be.

And Richard. Stubborn, insistent, pious Richard. Richard who would rather read sermons and watch from his lofty, safe pulpit while other mortals sinned and fought and loved and truly lived.

Sally couldn’t help but twist back to look at the stone quay receding slowly in the distance, for one last attempt to make out his form.

There was no one. He simply had not come.

She swallowed the bitter heat of disappointment and disillusionment. So be it. She would not look back again. Sally blinked the rain out of her eyes and fixed her gaze forward, toward the future.

With every oar stroke that brought them nearer, the ragged pounding of her heart rose higher and higher, until the roar filled her ears. Until her pulse matched the incessant drumming of the rain against the surface of the water. Until it grew to a thunderous cascade of sound and sensation that obliterated all else, burning with a single euphoric flame.

First Lieutenant David Colyear hauled himself onto the streaming deck to await the damned dithering boy’s appearance. And to cool the hot end of his normally slow temper, now burnt to a cinder by the dirty weather and the relentless responsibilities of fitting out the ship to his captain’s orders.

Luckily for them both, the boy managed to follow him with alacrity, clambering quickly through the port open at the waist of the ship, despite his too-big-looking shoes making his feet as awkward and ungainly as a seal’s flippers.

God help the sodden boy because he wouldn’t. Col’s friends and former shipmates, Owen and Matthew Kent, had written him to expect reticence and indifference from their weedy youngest brother, but not the near disobedience that had prompted Col, for their sakes alone, to fetch the boy from shore when he had finally shown up hours later than expected. He owed the Kents that much—to save the boy from himself—because they had done as much for him. They had been steadfast friends, and Col knew it had been through Captain Kent’s good offices that he had been recommended for and received his post on
Audacious
.

There was nothing, absolutely nothing, he might not do for such friends. Except further mollycoddle their reticent, recalcitrant baby brother.

“Let me advise you on two points, Mr. Kent.” He kept his tone low and his eyes on Kent’s face, to make damn sure the boy understood. “I discommoded myself to fetch you from the quay for your brothers’ and family’s sake, not yours, and now have served my debt to them. I will not do so again. Do not think to trade on your brothers’ or your father’s reputations with me. You will have to do the work of two men to ever equal one of your brothers in my eyes. And do not
ever
keep your captain, or your ship, waiting on you again. Do I make myself perfectly clear?”

Young Kent unfolded himself into something approaching straight and tall—straighter and taller than Col had expected given such an unpromising beginning.

The frank, ready admission was another surprise. Funny, he had remembered Richard Kent as pale and bookish, his sullenness a cold contrast to the burning flame of his hair. But this boy had changed in the years since he had last seen him. His face had become more puckish, more like Matthew’s, with its broad cheekbones and wide gray eyes that ought to have looked sober, but somehow managed to appear mischievous.

This boy’s eyes were alight, if not with his brothers’ mischief, then with bright intelligence as he took in his surroundings. Perhaps there was more Kent in the boy than his brothers suspected after all.

It was cautiously promising. And it took much of the bluster out of his sails. “I’m glad we understand each other. See to it that it doesn’t. I will show you to the captain now.”

“No need to discommode yourself, sir. I know my way.”

“Do you? Pray precede me there immediately.”

The lad knuckled his dripping hat, and in a trice scrambled deftly down the aft ladder and across the main deck to the captain’s stern cabin.

Their captain, Sir Hugh McAlden, was an exacting leader, expecting diligence and strict adherence to his orders. Yet he never pushed his officers or men as hard as he pushed himself, and in doing so, had made a name for himself as an audacious and successful frigate captain at a relatively young age. Col knew he was lucky to serve under such a man, despite the heavy burden of his high expectations.

The scarlet-coated marine sentry, standing guard outside the bulkhead door, announced their entry. “Mr. Colyear and”—his gaze barely flicked over young Kent. All the marine saw was the midshipman’s uniform, telling him the boy was beneath his notice—“a young gentleman.”