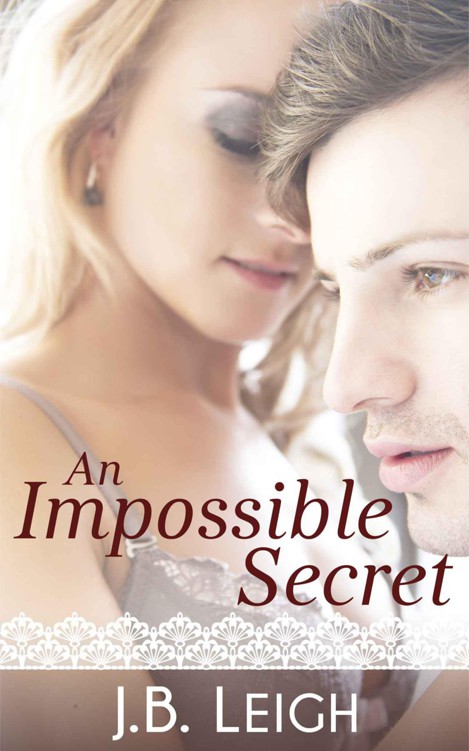 © 2013  J.B. Leigh, all rights reserved, worldwide. No part of this ebook may be reproduced, uploaded to the Internet or copied without the author's permission.

The characters and events in this book are fictitious. Any similarity to real persons, dead or alive, is coincidental and not intended by the author.

Want to receive an email when my next book is published?

“What's wrong with you?” Jimmy said.

“Didn't you notice how Jeannie was looking at you?” Jimmy was craning his neck to look back at the girl they'd left standing at the lockers.

“I thought she was just being friendly.”

“She was definitely being friendly. Those three open buttons on her top were ultra-friendly. You do realise she dropped that book on the floor for your benefit?”

Brice shook his head. He had no interest in Jeannie Moore. She was pretty enough—beautiful even, but she was vacuous. Her conversation—if you could call it that—was punctuated with 'likes' and 'inits'. Her favourite and, as far as Brice could tell, only topic of conversation was 'celebrities'.

“Couldn't you at least pretend to be—for my sake? That way, I get a chance to make a move.”

“You don't have any moves.” Brice grinned.

“Hey, I have plenty of moves. I just need someone to break the ice for me. That's where you come in.”

Brice shrugged. He’d had this same conversation with Jimmy a hundred times. “Come on. I'm starving. Let's go to Barry's.”

Barry's Pizza Emporium was the pizza outlet of choice for the majority of those studying at Westchester University—mainly because it was the closest and the cheapest. Barry’s did a delivery service, but the moped riders were so slow, you’d better enjoy your pizza cold.

“I thought you were meant to be in training,” Jimmy said.

“I can still have the occasional pizza. Anyway, I'm in good shape. I can't say the same about you.”

Jimmy patted his stomach. He'd put on almost a stone since he started at university—nine months ago. He wouldn't have felt quite so out of shape if he hadn't been standing next to the super-fit, super-toned Brice West. They made an unlikely pair. Brice was the ultimate sportsman while Jimmy struggled with anything more energetic than running for the bus. By rights, they should never have been friends, but Brice wasn't your average jock. He detested the term, and didn't take kindly to anyone who tried to label him with it. He had little in common with most of the other 'jocks', and had nothing to do with them outside training and matches. Brice and Jimmy had shared a table in the cafeteria on their first day at university. They'd hit it off immediately, and had remained firm friends ever since. Jimmy had hoped his befriending Brice would lead to good things with the ladies of Westchester University. Trust him to find the only jock in the whole university who had 'standards'.

The pizza was delicious as always, but the service left much to be desired. Barry, the owner, needed a crash course in customer service. He was a man of few words, and appeared to hold all of his customers in contempt.

Brice didn't notice Alec Weston until he was almost on top of him.

“Hey, Brice. Why do you waste your time with that loser?”

“Shut up,” Brice said, as he squared up to Weston and his entourage.

“He's a worm.” Weston nodded towards Jimmy, who was staring at the floor. The three guys at Weston's shoulder laughed as though their leader had told a hilarious joke.

“That guy's a total tosser,” Jimmy said, once he was sure they were out of earshot.

“Oh? Hi—?” She turned to Jimmy, but there was no sign of recognition in her eyes.

“Jimmy? Right.” She turned back to Brice. “Are you going to the seventies night?” Carla brushed her teeth across her bottom lip. Brice had noticed a lot of girls did that, but he'd never been sure why. Maybe it was all the lipstick they wore.

Carla stepped closer to Brice. “Pity. You'd enjoy it. I'm going to be there.”

“Great. I hope you have a good time.” Brice stepped past her.

“Blown off a beautiful girl. What's wrong with you?”

“I've been out with Carla before. Don't you remember?”

“That was enough. She talked about clothes and shoes all night.”

“She might not be the world's best conversationalist, but she does have other things going for her. Two in particular.”

“Why don’t you go back, and tell her you'll go to the seventies night with her,” Brice suggested.

“Like that would work.” Jimmy glanced at his watch. “Shit—I've got a lecture in ten minutes. I'll see you later.”

“Later.” Brice had a free afternoon, so intended to work in the library. He was behind on the notes for his last three lectures.

The university library occupied over half the second floor of the Gordon Building. Kerry always tried to grab one of the tables at the far end of the huge L-shaped room. That particular section housed books on theology and politics—neither of which were hugely popular at Westchester. She spent a lot of time in there—it was her refuge whenever she didn't have lectures or classes. It was the one place where sitting alone didn't mark her out as odd.

Kerry enjoyed her studies, but found the course remarkably easy. She'd hoped university would challenge her, but so far, it had failed to do so. Ironically, she'd worried she might not be able to keep up. Having been home-educated, she'd had no way of knowing how she'd fare against students who had come through the conventional schooling system. It turned out many of them were struggling with the demands of the course—either because they found it too difficult or because they weren't prepared to put in the work.

She had no more classes or lectures that day, but was in no hurry to go home. Her mum had been Kerry's teacher until the age of sixteen. After GCSEs, Kerry had more or less been self-taught. She'd refused to let her mum play any part in her A' level studies. Kerry's A' level results had been stellar, and she would have had a good shot at an Oxbridge place if she'd applied to either of the country's elite universities. Instead, she'd opted for her local university. That was partly because she'd been scared by the idea of living away from home, and partly to appease her mum.

Kerry spent a lot of time watching the other students. So many years of isolation had left her out of touch with people her own age. Most of the time, she felt like an alien living amongst them. She couldn't imagine ever feeling as at ease as they did with one another. Everyone seemed to know instinctively what to say and do. Everyone, except her.

A couple were standing behind a bookcase close to Kerry.

“Get off me, Dazz!” The girl brushed the boy's hand away from her bottom.

Kerry averted her eyes; she didn't want them to know she'd seen them.

“Dazz! Stop it!” The girl with the lime green hair noticed Kerry. Until then, they'd obviously thought they were the only people in that quiet corner of the library.

Kerry stared at her book—hoping they'd leave her alone.

Kerry blushed, shook her head and then went back to her book.

“See! She doesn't mind.” Dazz put his hand back on the girl's bottom.

“Leave it, Dazz!” The girl pulled away and started back towards the door.

Kerry waited until she was sure they'd gone before looking up. She found it difficult being around all of the students, but much more so around the boys. She'd never had a boyfriend. In fact, she hadn't even had a boy as a friend. The few friends she'd had when she was much younger had all been girls. She'd long since lost touch with them. She'd hoped she might make friends when she started university, but so far it hadn't happened.

Kerry had no idea what his name was, but he was by far the most handsome boy she'd ever laid eyes on. She'd hoped she might see him today—it was another reason she hadn't gone straight home after her last lecture. He often came to the library. Just like her, he was often alone. In his case, it must have been by choice. He looked like an athlete, but he didn't hang around with the other 'jocks'. Kerry had noticed how the other girls stared at him—some tried to engage him in conversation, but he never talked to any of them for more than a few minutes. Instead, he usually found a quiet corner where he could study. Some days, that quiet corner was close to where she was seated.

He was heading towards the table next to hers—her heart began to beat a little faster. She knew it was silly. Just like everyone else, he didn't know she existed. She was invisible. It took her a split second to realise his gaze was on her. He must have known she'd been looking at him. For the second time that morning, her cheeks blushed red. Averting her eyes, she focussed on her book, but the words swam across the page. Was he still staring at her? She daren't look up.

“Me and Chrissy are going to Toppers after uni,” Courtney squeaked. “Do you want to come with us?”

“You work too hard. You should have more fun.”

“Maybe another time.” Brice squeezed past her. Jimmy would kill him if he knew he'd turned down Courtney Jerome and Chrissy Slade.

He made his way over to the far side of the library where it was usually quiet. One table was free, and on the next sat the petite blonde girl who was always by herself. He'd sat near to her on a few occasions, but she'd never spoken or even acknowledged him. As he got closer to her table, he noticed she was looking straight at him, but before he could say 'hi', she looked away. Brice took a seat at the next table, and began to unpack the books from his bag. As he did, he stole the occasional glance at the girl. She was pretty, but so much different from the girls he usually encountered. Everything about her was understated. Her clothes were plain and modest. Her make-up, if she was actually wearing any, was very subtle.