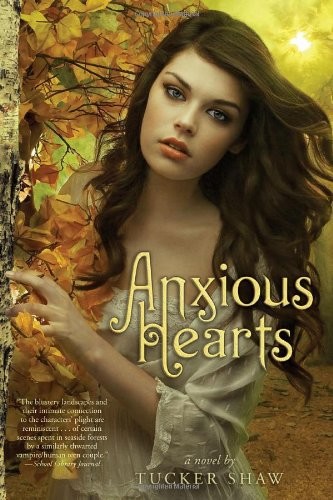 E
VA AND
G
ABE EXPLORE THE
golden forest of their seaside town in Maine, tracing the footsteps of two teens, Evangeline and Gabriel, who lived in the same idyllic woods more than two hundred years ago. On the day that Evangeline and Gabriel were to be wed, their village was besieged and the two were separated. And now, in the present, Gabe too has mysteriously disappeared from Eva.

A dreamlike tale of romance and undeterred faith inspired by Henry Wadsworth Longfellow’s epic love poem “Evangeline,”
Anxious Hearts
tells the story of a love so strong it sometimes causes one to lose oneself. Yet it also avows that even when lost somewhere on life’s journey, true love can be found and there is a way home again.

PUBLISHER’S NOTE
: This is a work of fiction. Names, characters, places,
and incidents are either the product of the author’s imagination or are used fictitiously,
and any resemblance to actual persons, living or dead, business establishments, events,
or locales is entirely coincidental.

Summary: In alternate chapters, retells events of Henry Wadsworth Longfellow’s poem
“Evangeline,” and relates a modern-day tale of Maine teens who were childhood friends and
later grew to love each other, and who, when pulled apart, are determined to reunite.
ISBN 978-0-8109-8718-0

Published in 2010 by Amulet Books, an imprint of ABRAMS. All rights reserved. No
portion of this book may be reproduced, stored in a retrieval system, or transmitted in
any form or by any means, mechanical, electronic, photocopying, recording, or otherwise,
without written permission from the publisher. Amulet Books and Amulet Paperbacks are
registered trademarks of Harry N. Abrams, Inc.

Amulet Books are available at special discounts when purchased in quantity for premiums
and promotions as well as fundraising or educational use. Special editions can also be
created to specification. For details, contact
[email protected]
or the
address below.

This book is for my grandmother, Barbara Shaw,
who sees a story everywhere she looks

Behind you the forest is thick, gray-green and silent and dark. Craggy pine trees stand in crowded clusters, shading the mossy ground with pointed shadows. Shafts of fizzy daylight dribble through the canopy onto the cushion of leafy undergrowth, dispersing into a pulsing green glow.

You stand at the edge of the wood, on a path that cuts faintly through the bearberry bushes and the ivory grove of birch trees. A deliberate path, but obscured, half hidden by undergrowth and fallen hemlocks. Where does it lead?

You follow this path, this stony stream, through a carpet of scarlet and yellow wood lilies as it curls out of the woods and into a billowy meadow of golden-green beach grass. The
air, now a salty mist, carries a quiet, far-off rumble, the groan of the distant ocean tides.

This path, like all paths and all stories, leads forward, through the calico grasses and thorny rose brambles, toward the horizon, toward the sky. But after a mile, or many, this path ends abruptly, where the ground falls away at what feels like the edge of the world. Only air, white and blue and yellow, and sea, white and blue and black, lie in front of you.

You step back from the unexpected precipice at your feet before peering warily over its edge. The cliff is vast, red-black and craggy, its narrow ledges populated by lean clusters of daredevil pine trees rooted precariously in the rock, far above the muffled waves and frothy whirlpools that snake and swirl through the rugged outcroppings a thousand feet below.

This bluff is a wild place, endless and open. You are alone here.

And yet, the air here is alive.

You trace back toward the woods, away from the cliff and into the taller grasses. There, you come upon the weathered remnants of a low wall of mossy granite, crumbling in places but solid. Beyond the wall, huddled against two hulking, primeval boulders, are the hollow remains of an ancient, neglected stone building. The structure, just big enough for a small dwelling, sits alone on this bluff, roofless and exposed,
its forgotten threshold facing the open sky. Still farther on, a low rock, flat-topped and smooth, an altar, rises from the grassy ground.

In the distance, a wood bird argues with a seabird, shrill voices trilling across the meadow. The breeze strengthens and swirls, weaving through the grasses, and gathering clouds twist lazily in the sky. You lie down atop the flat rock and listen. The wind whispers, hums, groans. You stare at the every-colored sky above and listen.

Whose path was this? Whose altar? Whose story lived here?

What have words ever done for anyone anyway? Can you catch fish with words? Can you pick berries with words? Fix a car? Heal the sick? No. Waste of time.

Especially poetry. Words that don’t even make sense. And you’re supposed to read them out loud. Please, tie me to a tractor. I can’t wait for next year, when all I have to do is coast. Then real life takes over and, if I don’t get out of Franktown, Maine, beats me senseless.

But he pronounces things wrong, too. Like the town up the road, Calais? Mr. Denis thinks it rhymes with
ballet
. If you’re from here you know that
Calais
rhymes with
Alice. Palace. Callous. Malice.

The other thing about Mr. Denis is he doesn’t like to be corrected. Mostly he just paces back and forth while we go around the room reading aloud. Today the lucky poem is “The Courtship of Miles Standish,” which he thought we’d be “wicked excited about” (his words) because the guy who wrote it was from Maine, but what Mr. Denis doesn’t know is that this part of Maine has nothing to do with that part of Maine. Another thing he doesn’t know is that when people like him say things like “wicked excited” it sounds stupid. Wicked stupid, as a matter of fact. He also doesn’t know that no high school junior is going to get excited about a two-hundred-year-old poem anyway.

Back and forth in front of the windows, Mr. Denis just paces, looking out into the fog, which hasn’t lifted all day. Behind him, Louise catches my eye and makes a face. I roll my eyes, catching John Baptiste in my peripheral vision,
pointing at me like he’s pointing a gun, and winking. No joke.
Winking
. What a tool. I look back at my textbook.

Back and forth paces Mr. Denis, licking his finger and smoothing the last few hairs left on his head, back and forth past the rows of desks, pretending not to look at us, almost closing his eyes, then without warning spinning around with a
snap!
to try and catch someone in the act of, I don’t know, passing a note I guess. Or falling asleep.

Or not paying attention, like Gabe Lejeune, who as usual is hunched over that mysterious notebook he carries around everywhere, running his left hand through his floppy chestnut hair and scribbling away with his other hand, writing whatever it is he writes in there.

I wonder what he writes about.

Gabe doesn’t even look up. He has no idea it’s his turn to read.

E
VANGELINE SET DOWN HER RAKE AND UNTIED
her felt cloak of cornflower blue, draping it over the fence that enclosed the small garden in front of the small, square stone-and-log house. She pushed her linen sleeves up over her forearms, swiped her hair away from her face, and looked up at the low, wispy clouds above. Gabriel seized on the gesture, sweeping his charcoal across the sheet of birchbark.

No good, he thought. He tossed the birchbark sheet aside and began to sweat with frustration. He glared at his inept hand, his sloppy sketch, and fretted. What if he was never able to accomplish this task? What if he never captured Evangeline’s beauty? He pulled another piece of birchbark from his foresleeve and smoothed it over his thigh.