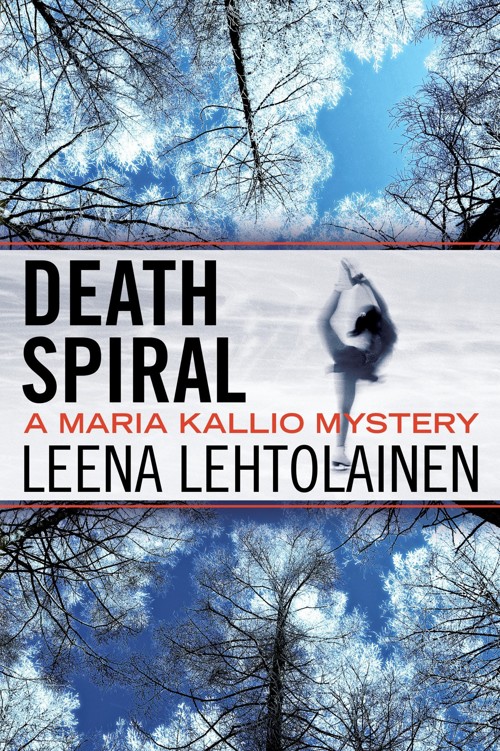 The crossbow was pointed straight at the girl’s heart. Her eyes were wide in terror, pleading with the Huntsman to spare her life. The man’s expression remained hard for only a moment before he broke down and lowered his weapon. The girl spun to flee, skates speeding to the far edge of the frozen forest as dancing animals filled the glade.

But the girl’s suffering was not over yet. Forest beasts set upon her, and even safe in the dwarfs’ home, she met only brusqueness at first. Then the evil stepmother appeared, disguised as an old woman, and fed Snow White the poison apple.

Who had done the performers’ makeup? It must have been a real professional. Not just anyone could have transformed the lovely Silja Taskinen into a wrinkled hag in the ten minutes she was off the ice, and Noora Nieminen’s Snow White was straight from the animated feature film. Of course it helped that both girls really threw themselves into their roles.

I’ve always liked the way figure skating balances right on the knife edge between good melodrama and utter tastelessness. Grand emotions evoked to the accompaniment of tired musical clichés. Because of the strict rules, original moves are challenging, but even so, every so often someone develops something we’ve never seen before. And occasionally a skater comes along with a real gift for drama. That’s why I watch figure skating.

In the end, of course, Snow White got her prince. I tried to hide my tears because my boss, Jyrki Taskinen, and his wife, Terttu, were sitting next to me and I didn’t want them to see. Even though I could blame my blubbering on being seven months pregnant, adults aren’t supposed to cry watching fairy tales on ice. Jyrki, who was usually fairly restrained, let out a whoop when the evil stepmother, his daughter, Silja, took her bow. I clapped and stomped too, but I made even more noise for Noora Nieminen.

Really, the roles should have been reversed. Silja Taskinen was the beauty; with her wide hips, Noora was more ordinary looking. But looks weren’t why she had landed the part of Snow White in the Espoo Figure-Skating Association’s spring show. Noora Nieminen was an international-level pairs skater, whose short program the previous season had been an homage to Disney’s
Snow White
. Noora’s partner, Janne Kivi, was practically made to play the prince. Tonight, as it was every time he performed, the Matinkylä Ice Arena was bursting with little girls eager to get his autograph and see him up close. Without a doubt, he was handsome as hell: thick blond hair just long enough for a ponytail, a well-proportioned body just a little too tall for a figure skater, and uncommonly bright-green feline eyes. I was right there with the little girls sighing whenever the television camera zoomed in on Janne’s high cheekbones and wide mouth. Watching beautiful men was one of my favorite hobbies.

Noora and Janne skated out one more time, giving the screaming crowd a final triple Salchow jump and a death spiral. The baby inside me kicked—maybe the noise had woken it up.

Suddenly I heard an intake of breath from Taskinen. A man with a black mustache and blond dyed streaks in his dark hair had appeared at the edge of the ice and tossed Noora a bouquet of crimson roses. She made no attempt to retrieve the flowers, though, and soon the petals were shredded by the skates of the forest creatures, courtiers, and dwarfs as they came out to thank the audience.

“Is that the stalker?” I asked Taskinen. Although the case didn’t belong to our unit, I knew someone had been bothering the Nieminen family for the past couple of years. The man had made repeated threats against Noora’s mother and ultimately was fined for trespassing and disturbing the peace.

“Yes. Vesku Teräsvuori, ‘the King of Karaoke.
’
” Taskinen shrugged in frustration. The police couldn’t prevent Teräsvuori from coming to a public event or throwing flowers to Noora. Legally, it was just a nice gesture.

Once the tiny skaters who played the dwarfs and forest creatures finally glided away, the rink was traced with dotted trails of crushed rose petals—as if blood had sprayed across the ice.

“Let’s pick up Silja from the dressing room, and you can get a ride home with us,” Terttu said.

When Jyrki came around the department selling tickets to his daughter’s performance, I’d bought two without a moment’s hesitation, but my husband, Antti, wasn’t able to come. I didn’t know I would be sitting rink side with the performers’ families. Everyone else from work watched the performance from the other side of the cramped arena.

“I’m fine taking the bus,” I said, but it was no use. Of course getting to peek into the dressing rooms was fun. Maybe I should have joined the crowd of girls waiting for Janne Kivi’s autograph. But first I had to find the women’s restroom. After arranging to meet the Taskinens outside the dressing room doors, I slipped down one of the bare concrete hallways.

There was only one women’s restroom compared to three men’s rooms, and of course it was crammed with a dozen little girls, so I decided to use the bathroom with
Staff Only
stenciled on the door. I was seven months pregnant and a police officer after all.

I was fighting with the complicated fasteners of my maternity pants when I heard the door violently flung open. Based on the footsteps, there were two people.

“What the hell do you think you’re doing?” said a furious voice, its gender difficult to determine because it was so raspy. Based on the noises, the speaker was attacking the other person. The sounds of struggle, a bang of a leg against the sink, and the crash of the trash can tipping over drowned out the response. As soon as I could get my pants back up, I would have to intervene.

“Get out of my sight! I never want to see you again!”

Following these words came the sound of the door opening, as if the one with the raspy voice had shoved the other one out into the hall. By the time I finally succeeded in getting the clasp on my pants fastened, the restroom was empty. The pile of trash on the floor and the crooked mirror on the wall proved I hadn’t just been hearing things.

I decided to forget the whole incident and set off weaving through the crowd to the performers’ dressing rooms. Inside was total chaos, with dozens of little skaters looking for their parents and wiping off their fox whiskers, squirrel noses, and rabbit teeth. The twelve-year-old girl who played Sneezy the Dwarf was trying to wash her red-painted nose, and the prince’s men-at-arms were fighting with their toy swords. A woman with heavy makeup dressed in an ankle-length fur coat tried without success to get the children to listen to her.

“Quiet, everyone!” a deep female voice suddenly bellowed with so much authority the speaker didn’t really even need to raise it. In an instant the entire raucous mob fell silent and the trainer, Elena Grigorieva, thanked her skaters for a successful performance and a good season.

I listened too, but more to Grigorieva’s voice than her words. Was this the same voice I had just heard issuing threats in the restroom? Just then Taskinen tugged me by the sleeve.

“This is still going to take a little while. Rami and Elena ordered juice and cookies to celebrate the end of the season.”

“At least we could have champagne,” another male voice said behind me. Turning my head, I met Janne Kivi’s green, bored-looking eyes.

“You drank quite enough champagne in Edmonton,” Silja Taskinen, who was standing next to him, said with a laugh.

“But it’s been two months since then!” Janne said.

Finland’s young figure-skating team had done quite well in competition in Edmonton, Canada. After Mila Kajas fell ill, the Figure-Skating Federation sent Silja Taskinen in her place, and she had surprised everyone by placing twelfth overall. Our men’s and ice-dancing showings had been weaker, but Noora Nieminen and Janne Kivi’s ninth-place result in the pairs had been a real sensation. Finland hadn’t been able to field an internationally competitive pair in decades. The Eurosport announcers had even gone so far as to float the possibility of a world championship for Noora and Janne within the next few years.

“Let’s go, Dad,” Silja said to Taskinen. “We don’t have any reason to celebrate. Our next season has already started.”

After the World Championships, Silja, Janne, and Noora had given themselves a couple of weeks of vacation before beginning rehearsals for the ice show. When Silja and Noora’s high school semester ended, the team and their coaches, Elena Grigorieva and Rami Luoto, would travel to Canada for two months of training camp.

“Hi,” Janne said politely, although he clearly wasn’t the slightest bit interested in who I was. Suddenly I felt someone pushing between Janne and me, and then I saw Noora Nieminen.

I’m barely five foot three, but Noora was at least two inches shorter than me, and at sixteen years old, she was a funny mixture of little girl and mature woman. Her gray eyes were those of an adult, as if she had already seen too much for her age.

“I wish that jerk would leave us alone already!” Noora said with a dramatic sigh. “He should know I would never touch anything from him! Mom probably went hysterical when she saw him. Speaking of, have you seen my parents?”

Noora tried to see over the crowd.

“Your dad is over there by the front door,” Janne said from his vantage point of six feet one inches. On the ice Noora and Janne looked like a well-proportioned pair, but off the ice their difference in height and age was stark, although Janne was only twenty-one.

“Well, I’m leaving,” Janne announced and started pushing his way toward the door.

“See you tomorrow, Silja,” Noora whispered and set off in the other direction, toward the front door where a balding, red-faced man, obviously her father, was waving. Not bothering to offer to carry Noora’s enormous bag, he barged out the door as if he were angry. The door almost crushed Noora.

That was the only time I ever met Noora Nieminen alive.

Broken Heart 10 Some Lycan Hot by Michele Bardsley
The Book of Deacon: Book 02 - The Great Convergence by Joseph Lallo
Catching Waves by Stephanie Peters
A Sisterly Regard by Judith B. Glad
No Life But This by Anna Sheehan
My Senior Year of Awesome by Jennifer DiGiovanni
Hello Treasure by Hunter, Faye
A Fashionable Affair by Joan Wolf
Wed to a Highland Warrior by Donna Fletcher
The Widow and the Wildcatter: A Loveswept Classic Romance by Baker, Fran