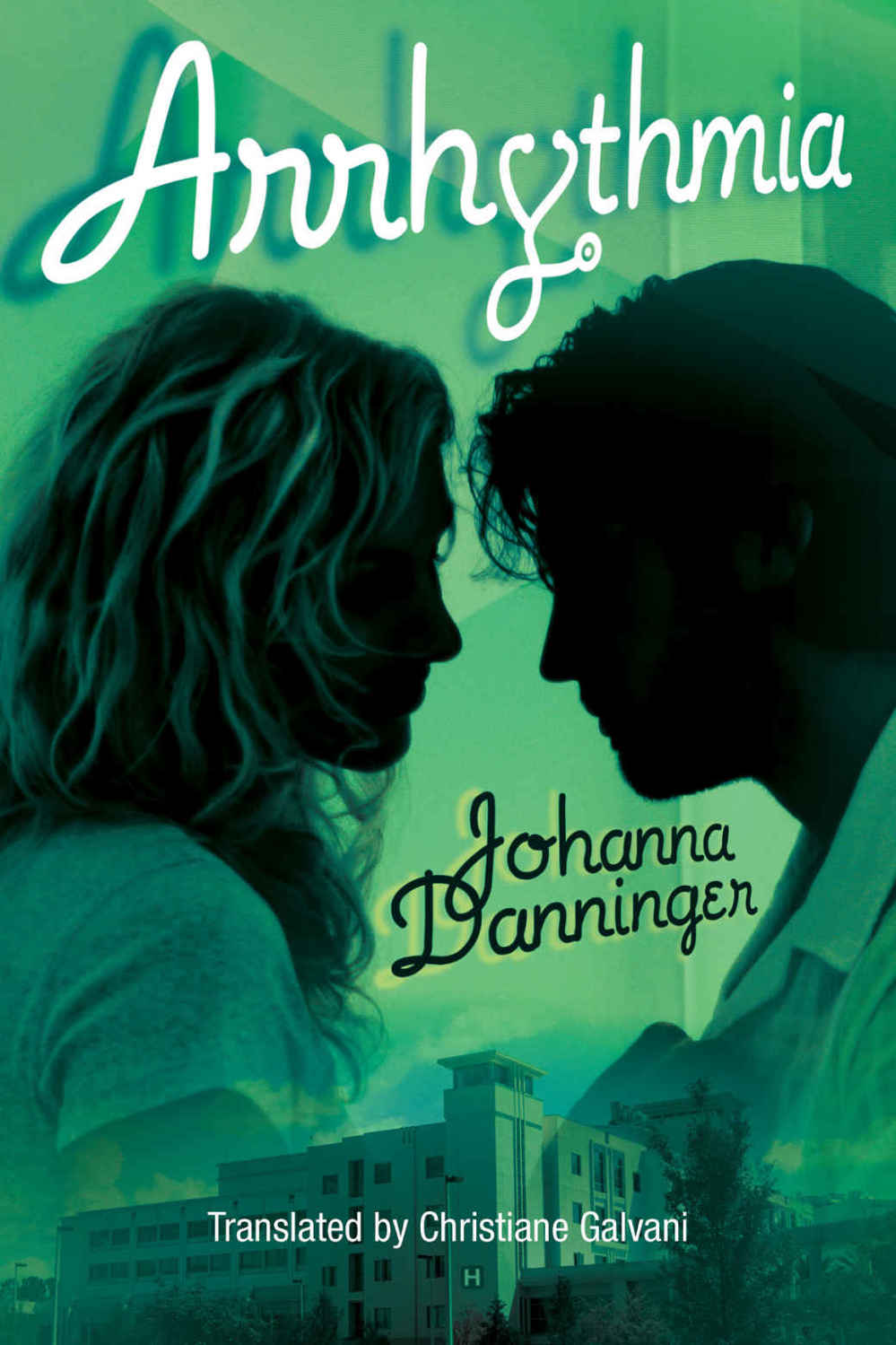 Previously published as
Vorhofflimmern
by Amazon Publishing in Germany in 2014. Translated from German by Christiane Galvani. First published in English by AmazonCrossing in 2015.

Amazon, the Amazon logo, and AmazonCrossing are trademarks of
Amazon.com
, Inc., or its affiliates.

The emergency room of Wollbach County Hospital was hot and sticky. Even though it was only late May, the temperature was already in the mideighties, and our ancient ventilation system was struggling to keep up. The humidity seemed to rise by the hour, and by late afternoon each of the rooms felt as if it might spawn its own thunderstorm.

I was loath to do it because the large lamp was practically a space heater. Our admins seemed not to have heard of LEDs, so we still had to deal with hot old-fashioned bulbs.

Still, knowing Dr. Heimer needed more light to perform the procedure, I turned it on and focused it toward the surgical site. The patient flinched.

I gently patted his shoulder to reassure him.

“Almost done,” I purred, which seemed to do little to comfort the man. He whimpered softly. I looked him over: shallow breathing, pasty complexion, cold sweat . . . Years of experience in the ER suggested that he risked going into shock.

The patient began to whimper more audibly as he stared at the large tweezers I handed to the doctor.

“This isn’t going to hurt a bit,” Heimer added.

The patient moaned incredulously, but he lowered his head and closed his eyes in resignation.

The attending physician leaned over the man and carefully positioned the instrument. “There it is . . .”

I handed the doctor a gauze pad in exchange for the corpus delicti.

“Is it out?” the patient asked breathlessly. “Is it all out?”

The man squinted with relief and groaned. “Thank God!”

A waste of paper, really, but just another part of the health care bureaucracy.

While the patient slowly recovered, I drowned the tick in some disinfectant and placed it in the garbage as per protocol.

“You can get dressed now,” I told the patient, seeing that his complexion was returning to normal.

“But what about the wound?” he inquired anxiously. “Aren’t you going to bandage it?”

I furrowed my brow as I examined the red dot that did not even remotely merit being described as a “wound.”

“You know,” I finally said, “I believe that, in this case, we can manage without a bandage.”

“Because I don’t think it’s going to be very pleasant to remove an adhesive bandage from your testicle.”

The man thought about it for a moment and agreed. “Probably not.” He got up and pulled up his pants.

The waiting room was tense when I returned the patient to his concerned wife. Given the hysteria with which he’d arrived, uninformed onlookers were surely convinced we’d just saved the man’s life.

Of course we had. That’s what the ER is for, isn’t it?

I shook my head slightly as I returned to the treatment room and joined Dr. Heimer, who was busy examining an X-ray.

He glanced at me archly. “What’s wrong, Lena? No man-hating jokes? That isn’t like you!”

I cleared my throat. “I’m cultivating my sense of compassion.”

He didn’t believe me, of course. We’d been working together too long. The real reason for my failure to make a snarky remark was that there were too many to choose from. I swallowed all my quips about tough guys with soft parts and instead took a close look at the X-ray of a broken forearm.

“Are you planning to reset the arm?” I inquired.

“Yes. There’s too much swelling for us to operate. First, we need to immobilize it for a few days.”

“Yeah, ten milliliters should do it.”

“Should be plenty,” I said as I turned to go. “After all, the arm belongs to a woman.”

Three hours, six contusions, four fractures, and several lacerations later, I was sitting in the nurses’ kitchen with my favorite colleague, Sandra, enjoying a well-earned cup of coffee.

The room was really so much more than a kitchen. It functioned as a staff lounge, an office, a conference room, a de-stressing center, and a gossip hub. In short, it was the nucleus of the entire emergency department.

Even though my top was sticking to my back with sweat, I relished sipping the cup of caffeine. As far as I was concerned, it was never too hot for coffee.

The peaceful atmosphere of our short break was broken when Dr. Reinmann swept into the room. The elderly surgeon was always stressed out. I couldn’t remember ever having seen the ruddy-faced, beer-bellied man relaxed. His walk was stressed, his laugh was stressed, and for all I knew, his sleep was stressed. Still, he was an excellent physician, and his challenging demeanor made him a unique member of the hospital community. Reinmann also had a superbly dry sense of humor, and he and I loved to debate which was the stronger sex, men or women.

Reinmann plopped down into a chair and groaned as he wiped the sweat from his forehead. “It’s hotter than hell in this place. I don’t know how a person can be expected to put up with it.”

I ignored his lamentations and spread the newspaper on the table in front of me. Sandra took the bait and bought the good doctor a round of pity.

“Oh, poor Dr. Reinmann. What are you still doing here at this late hour? Are you on duty?” she asked.

“Oh dear!” She used the tone of voice you use when consoling a small child who’s skinned his knee. The attending physician seemed pleased.

“Yes, well, I don’t know why I have to be on duty so much,” he complained.

I rolled my eyes. “Because you get paid for it,” I muttered, without looking up from the paper.

“Lena! Why are you being so bitchy?” he asked.

“I’m not being bitchy. I’m just telling the truth.”

Reinmann chuckled and went to grab my newspaper.

“Hey!” I objected and held on to the paper. “I’m obviously reading that! The least you could do is ask.”

He held up his hands defensively. “I surrender! Are you always like this?”

“Well, I sure don’t envy your future husband!”

Sandra jokingly punched me in the shoulder. “What future husband? No men have the balls to get near our Lena.”

“They’re all too intimidated by her!” Sandra said.

I angrily shoved the sports section toward the doctor.

“I’m just too strong for weak men,” I declared.

“You’re so demanding, Lena,” she said.

“I’m not demanding at all, Sandra! I simply have standards,” I insisted, wondering how to get them to leave me alone.

“How old are you, if I may ask?” Reinmann said.

I bit my tongue and resisted telling him that he may not ask. Instead, I replied as coolly as possible, “I’m twenty-five.”

“What? Twenty-five and not married?”

“When I was your age, I was already considering divorce,” he said.

I knew that was nonsense because Reinmann had been married to the same woman for forty years. Sandra knew it, too, and reminded him.

“You do know what the German word for marriage,
Ehe
, means?” he asked with a smirk. “It stands for
errare humanum est
. Which translates as ‘To err is . . .’”

“Human.” Sandra and I finished the joke in unison, having already heard it a thousand times before.

Reinmann still took pleasure in the punch line. He straightened the section of the paper that I had been gracious enough to hand over and read a few lines before looking up at me as though he had just had the most splendid idea.

“Come to think of it, our new resident starts next week. He might be perfect for you!”

“God forbid! Never a doctor.” I sniffed with conviction.

I gave him a knowing look. “Because they’re always stressed out.”

Sandra giggled. Apparently, the attending physician had missed my insinuation.

“Oh, whatever,” he said. “In that case, just choose a gyno. They’re used to women and don’t get their feathers ruffled.”

Inwardly, I rolled my eyes at Reinmann’s nickname for OB-GYNs. Outwardly, I put on a dead-serious face and said, “Men who know more about my vagina than I do creep me out.”

Reinmann exploded with laughter, while Sandra gasped and then dissolved into giggles.

“Have you met the new resident?” she asked Reinmann, finally letting me off the hook for a second.

“Yes, yes,” he said eagerly. He leaned forward with an air of conspiracy. “An absolute catch, as far as a man like myself can judge.”

Based on the way his past pronouncements about fine specimens turned out to be total duds, I knew he couldn’t.

“And he seems extremely competent,” he continued, but I knew well enough to take even this professional assessment with a grain of salt. “He’s been doing surgery for quite some time and is only six months from his boards, so I’m assuming that he is pretty accomplished already.”

I had to admit that was a relief. No one is born a master, but the residents who came to us fresh out of med school could be a serious pain.

Reinmann had more gossip to share, but the doorbell screamed, announcing a new patient.

I looked longingly at my still-half-full cup as I shuffled out of the kitchen with no desire to get back to work.

Patients really had a way of ruining one’s entire shift . . .

Chasing Destiny by Nikki Rittenberry
"Shady Bizzness: " Life as Eminem's Bodyguard in an Industry of Paper Gangsters" by Williams, Byron
The Memorist by M. J. Rose
Never a Perfect Moment by Cathy Cole
The End of the Book by Porter Shreve
Bonsái by Alejandro Zambra
Practice to Deceive by Patricia Veryan
My Name Is Not Angelica by Scott O'Dell
Renegade by Nancy Northcott
Russian Billionaire's Fiancée (Chekov Billionaire Series Book 3) by Lee, Leona